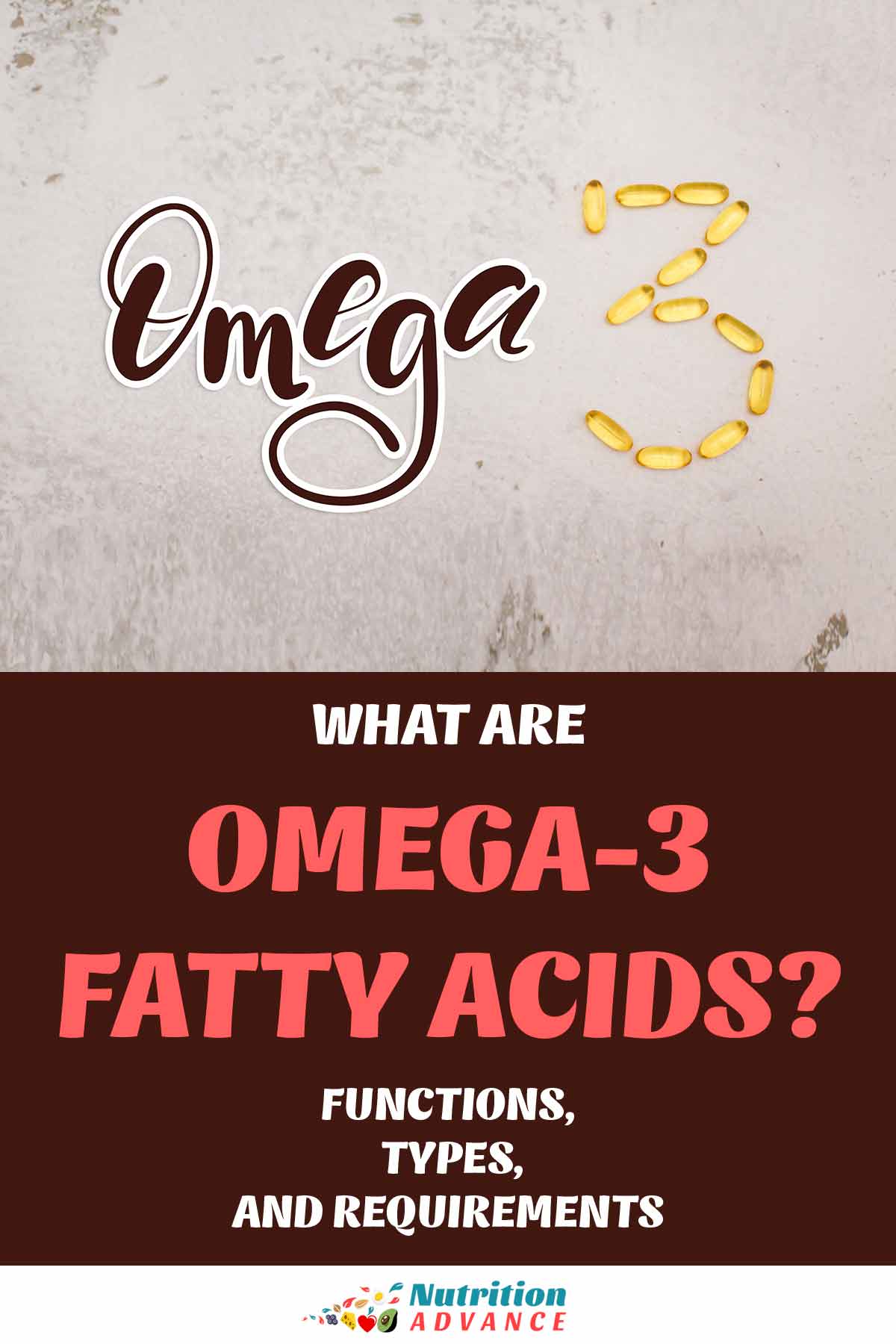 However, the human body cannot make them, and so we need to get sufficient omega-3 from our diet.

In this article, we examine the importance of these dietary fats, how much we require, and the potential benefits they offer.

What Are Omega-3 Fatty Acids?

As mentioned, omega-3 fats are essential for human health.

The reason for this is because humans lack an enzyme required for the desaturation process that forms omega-3 (1).

Since our bodies cannot naturally produce omega-3, we need to get it from our diet.

Omega-3 is a type of polyunsaturated fat and, chemically, the first double bond is located between the third and fourth carbon atom away from the methyl end of the chain (2).

Key Point: Humans cannot endogenously synthesize omega-3, so we need to obtain it from dietary sources.

Firstly, there are many different omega-3 fatty acids.

The table below shows these fatty acids alongside their lipid and chemical names (3).

Among these fatty acids, the primary omega-3 fats are:

Alpha-Linolenic acid, or ALA for short, is a type of omega-3 found in plant-based foods.

On the negative side, the human body doesn’t appear to use ALA directly, and it requires conversion to DHA or EPA (active forms of omega-3) inside the body (4).

Unfortunately, the conversion rate of ALA to EPA and DHA is highly variable and generally poor (5).

For instance, in a study featuring healthy young women, the conversion rate of ALA to EPA and DHA was 21% and 9% respectively (6).

However, this conversion can be even worse in men, with approximately 8% of ALA successfully converting to EPA and 0-4% converting to DHA (7).

The different conversion rates between the two genders may be due to the influence of the female hormone estrogen and other hormones (8).

Furthermore, omega-6 fatty acids compete with ALA for absorption. For this reason, the conversion rate falls by 40-50% in diets that contain high amounts of omega-6 (9).

For an in-depth look at the omega-6 to omega-3 ratio (and whether it matters) see this guide.

According to the Food and Nutrition Board of the Institute of Medicine, an ‘adequate intake’ of ALA is 1.6 g for male adults and 1.1 g for female adults (10).

Some of the best food sources of ALA omega-3 include the following options:

Docosahexaenoic acid, also known as DHA, is a type of omega-3 found in animal-based foods, and especially seafood.

Unlike ALA, DHA is highly bioavailable, and it is already in its active form. In other words; the body can use it instantly, and it requires no further conversion inside the body.

DHA is also the primary omega-3 fatty acid used by the brain, and among its numerous benefits, it is thought to hold importance for cognitive health (11).

Eicosapentaenoic acid, abbreviated as EPA, is another type of omega-3 fatty acid found in animal-based foods.

EPA and DHA often come packaged together in food, and they share many of the same benefits.

However, there are still differences between the two, and some recent research suggests that EPA may have unique liver-protective properties (12, 13, 14, 15).

Guidance from the 2015-2020 Dietary Guidelines for Americans recommends a daily intake of at least 250 mg DHA and EPA combined (16).

On the negative side, the majority of individuals have an insufficient intake of these essential fatty acids.

Based on a systematic review of 53 studies across 17 countries, only 26% of people consume EPA and DHA as recommended by national guidelines (18).

Some of the best food sources of DHA and EPA omega-3 include the following options:

It is important to get enough DHA and EPA since they are the active forms of omega-3.

For vegetarians or vegans, it is also possible to get EPA and DHA from algae-based supplements (19).

To find out more about the amount of omega-3 in different foods compared to other fats, see this guide here.

Key Point: There are three main types of omega-3, and the most important of these are EPA and DHA.

A wide array of research has investigated the potential benefits of dietary omega-3 intake.

Based on the existing evidence, here are some of the most proven benefits of omega-3 fatty acids.

Omega-3 fatty acids have anti-inflammatory actions within the body.

On this note, a systematic review of 26 randomized controlled trials evaluated the effect of omega-3 on inflammatory biomarkers (20).

Among the findings of this research, the review demonstrated that 1.2 to 6-grams of omega-3 per day reduced blood levels of pro-inflammatory cytokines such as interleukin-6 (21)

However, we know less about how omega-3 affects levels of inflammation in otherwise healthy people. There is also no consensus on the exact optimal dose for anti-inflammatory benefits.

The triglyceride-lowering impact of omega-3 is one of the most recognized benefits of these fatty acids.

However, the research shows that relatively high doses are required for a substantial effect in this regard:

May Have Cognitive Benefits

Another area of research on omega-3 relates to the positive impact these fatty acids may have on cognitive health.

On this note, a recent systematic review looked at 25 randomized controlled trials in this area and found evidence for (31):

However, the evidence for omega-3 improving cognitive health is inconsistent.

In this regard, a further systematic review concluded that “it is still unclear” if omega-3 intake “can improve cognitive development or prevent cognitive decline in older adults” (32).

Key Point: Higher intake of omega-3 fatty acids may have cognitive benefits, but the evidence for this is inconclusive.

Mixed evidence exists on the potential benefits of omega-3 in reducing cardiovascular risk.

First of all, two extensive reviews found that omega-3 supplementation has little effect on the prevention of cardiovascular disease.

The first of these was a Cochrane systematic review of 79 randomized controlled trials lasting for 12 months or longer. This systematic review showed that moderate to high-quality evidence shows no cardiovascular benefit from increasing DHA and EPA (33).

Secondly, another broad systematic review looked at ten clinical trials featuring 77,917 participants. In these participants, omega-3 supplementation for a mean of 4.4 years had no significant impact on cardiovascular events or the development of cardiovascular disease (34).

It is important to note that the above-mentioned systematic reviews were based on clinical trials featuring omega-3 supplementation.

In other words, they were conducted in participants with pre-existing health conditions, and they weren’t looking at dietary omega-3 intake from foods such as oily fish.

Interestingly, studies that investigate the impact of dietary omega-3 from food sources have contrasting findings to those that analyze omega-3 supplementation.

For example, a systematic review and meta-analysis of 26 cohort studies and 12 randomized trials demonstrated that oily fish intake had a protective effect against cerebrovascular disease (35).

Also, a meta-analysis of 91 studies featuring 408,305 participants found that fish had a dose-response protective effect. In a dose-response analysis, each additional 100 grams of fish per week associated with a 5% decreased the risk of acute coronary syndrome (36).

Why Is There Mixed Evidence?

As shown, mixed evidence exists on omega-3 and cardiovascular risk.

It could also be because individuals eating higher amounts of oily fish and seafood generally have a healthier overall diet.

However, the existing evidence base suggests that food sources of omega-3 are likely a better choice than supplementing with fish oil.

Key Point: Omega-3 may have a protective effect against cardiovascular disease. However, the current evidence is inconsistent, and clinical trials involving fish oil show a lack of efficacy.

May Improve Symptoms of Depression

There is an extensive range of research into the potential benefits of omega-3 for individuals with depression.

The more recent research appears to show that moderate to high doses of omega-3 can reduce symptoms of depression:

The researchers behind the second meta-analysis hypothesized that EPA (but not DHA) might lower the production of omega-6 fatty acid arachidonic acid.

This line of thought is likely due to previous research showing that the blood ratio of arachidonic acid to EPA significantly correlates with depression (39, 40).

Some studies suggest that omega-3 intake may help to lower blood pressure.

Firstly, a meta-analysis of randomized controlled trials demonstrated that (41):

However, another meta-analysis of randomized trials on omega-3 supplementation found conflicting results.

In this analysis of 45 randomized controlled trials, there were no significant changes to blood pressure readings from omega-3 supplementation (43).

Key Point: Omega-3 supplementation may have small benefits for blood pressure, but the data is inconsistent.

Overall, the research shows that a higher dietary intake of omega-3 fatty acids may have several potential benefits.

Among these, most evidence exists for their anti-inflammatory and triglyceride-lowering functions.

However, there is a lack of strong evidence supporting the proposed benefits of fish oil supplements.

Since food sources of omega-3 also offer various essential vitamins and minerals, sourcing omega-3 from seafood may be an optimal choice.

For more on dietary fat, see this guide to monounsaturated fatty acids.