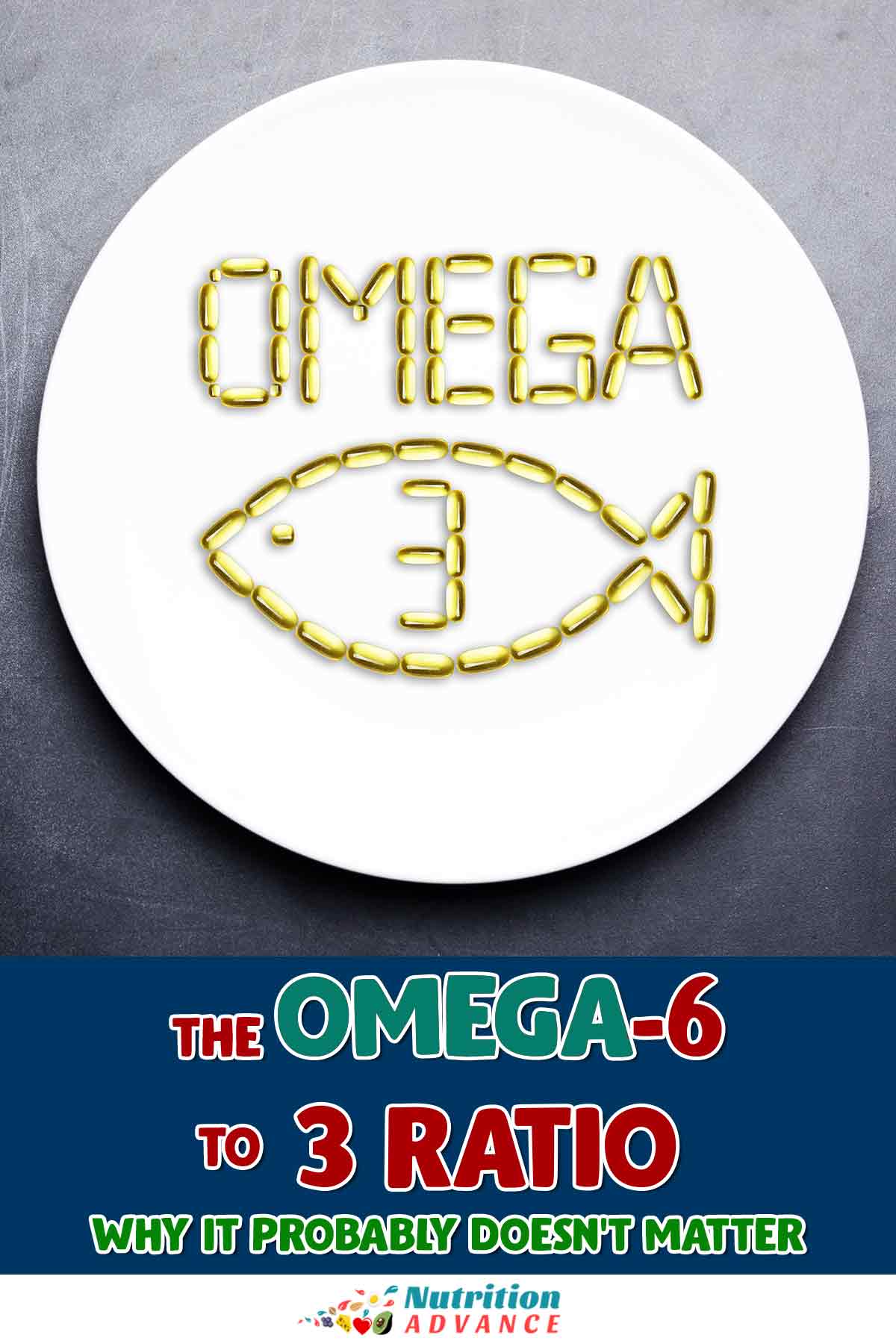 Omega-3 and omega-6 are both essential fats.

The term ‘essential’ means that the human body cannot make these fats, so we need to acquire them from our diet.

Over recent decades, several researchers have hypothesized that the omega-6 to 3 ratio of the human diet might play a key role in health and disease risk (1, 2).

This article discusses whether the omega-6 to 3 ratio of the human diet matters and the most important considerations.

If you have six apples and one orange, the ratio of apples to oranges is six to one (or 6:1).

In other words: the omega-6 to 3 ratio refers to the amount of omega-6 we consume compared to omega-3.

Both of these fats have different functions within the body.

The Omega-6 to Omega-3 Ratio Has Changed Within Human Diets – But Does It Matter?

According to some researchers, humans evolved on a diet that provided omega-6 and omega-3 at a relative ratio of around 1:1. However, estimates based on current dietary trends now place this ratio anywhere between 15 to 1 and 20 to 1 (1).

The reason for much of this change is how humans eat.

As people have started to eat less seafood and fewer whole foods, omega-3 intake has fallen. Also, our intake of omega-6 has risen rapidly, mainly due to vegetable oil intake.

Meat, poultry, and nuts can also be substantial sources of omega-6, particularly when consumed in large quantities.

As previously stated, some people argue that we have an imbalanced dietary ratio of omega-6 to omega-3 that may have negative connotations for human health (1, 2).

But does the latest evidence support this assertion or is there more to it?

First of all, it is important to note that blood levels of omega-3 are quite consistently associated with improved cardiovascular outcomes.

The omega-3 index is a clinical measurement that establishes (7, 8):

For those unaware of any of these abbreviations, EPA stands for eicosapentaenoic acid, a highly bioavailable form of omega-3 found within seafood. The same is true for DHA, which is an abbreviation of docosahexaenoic acid (9).

Research demonstrates that a higher omega-3 index has beneficial effects on human health. Notably, a higher EPA to ARA ratio in the blood appears to lower the risk of cardiovascular disease and cardiovascular events (11, 12, 13).

Furthermore, a comprehensive meta-analysis analyzed 19 observational studies involving more than 45,000 participants. This meta-analysis showed that the risk of fatal coronary heart disease fell in a consistent linear pattern when comparing participants with higher blood levels of EPA and DHA to lower levels (14).

Data also shows that increasing our dietary intake of EPA and DHA may benefit various markers associated with cardiovascular risk.

Does a High Dietary Omega-6 To Omega-3 Ratio Have An Adverse Effect?

Now that we have established the benefits of a higher omega-3 index, it’s time to assess the importance of the relative amounts of omega-6 and omega-3 we consume.

Does a high dietary omega-6 to omega-3 ratio negatively influence the omega-3 index?

First, as discussed, it is clear that higher tissue levels of omega-3 to omega-6 (e.g. the ratio of EPA to ARA) are beneficial.

However, evidence suggests that the absolute amount of omega-6 compared to omega-3 in the diet is probably not the main issue. Instead, the issue appears to be more about an omega-3 deficiency.

Let’s now look at some reasons why.

The Claim That Omega-6 Is Inflammatory

One of the main reasons people have historically touted the omega-6 to omega-3 ratio is the claim that omega-6 fatty acids are inherently inflammatory. However, this claim is overly simplistic and lacks understanding of the metabolism of omega-6 fatty acids and their effect on the body.

The original idea that omega-6 fatty acids are inflammatory largely stems from the following research findings:

This is an overly simplistic (and incorrect) view.

Dietary Omega-6 Is Not Inflammatory

Firstly, it is true that arachidonic acid can be converted into a range of eicosanoids (signaling molecules). But while some of these are pro-inflammatory, others have anti-inflammatory functions (27, 28).

Secondly, the amount of EPA/DHA to ARA in the cells influences inflammatory processes rather than omega-6 to omega-3 in the diet.

On this note, a higher intake of linoleic acid (omega-6 from oils, nuts, meat, etc) does not lead to significant increases in arachidonic acid. For example, research has shown that tissue levels of arachidonic acid stop responding to increased dietary linoleic acid when the amount is above 2% of total energy (29).

Some further significant research findings that dispel the idea that dietary omega-6 is inflammatory:

Do Omega-6 and Omega-3 Compete For Cellular Uptake?

Do the omega-3 and omega-6 we consume compete with each other for uptake and absorption?

The three most common forms of omega-3 are:

The ALA form of omega-3 and the omega-6 linoleic acid indeed compete with each other for conversion to their bioavailable forms. Thus, consuming large amounts of omega-6 and relatively small ALA amounts will lower the amount of ALA that the human body can absorb (34).

However, the same is not true for EPA/DHA. Higher amounts of linoleic acid in the diet do not affect the amount of omega-3 we can absorb from EPA and DHA.

Furthermore, omega-3 from preformed EPA and DHA sources (like oily fish) are extremely bioavailable, but ALA already has meager absorption rates. Based on trials in healthy human participants, the amount of ALA that the human body can convert to EPA may be as low as 8% and for DHA, only 0-4% (35).

This really emphasizes the importance of consuming sufficient amounts of preformed omega-3.

The Real Issue: Getting Sufficient EPA/DHA Is More Important Than the Omega-6 to 3 Dietary Ratio

As we have seen thus far, increasing dietary linoleic acid intake does not significantly increase inflammatory markers, and it has relatively little effect on tissue levels of arachidonic acid.

So, what does have an effect?

The answer to that question is pre-formed omega-3. Increasing the amount of preformed omega-3 (EPA/DHA) we consume has several effects:

Thus, ensuring sufficient intake of omega-3 from EPA and DHA is the main issue rather than the total amount of omega-3 and omega-6 in our diet.

Yet Most People Don’t Consume Enough EPA and DHA

Unfortunately, the vast majority of people do not consume enough EPA and DHA.

A recent global survey analyzed the amount of EPA and DHA in the bloodstream among adults all over the world (38).

Although certain regions, such as Japan and Scandinavia, had high blood levels of EPA and DHA, most of the world did not.

In Japan, the percentage of EPA and DHA as a fraction of total fatty acids was very high (>8%). Yet, it was very low (<4%) in the Americas, Europe, the Middle East, Southeast Asia, and Africa.

One of the key reasons for this low intake is the lack of dietary omega-3 from seafood sources. For instance, data shows that US adults only consume an average of 0.43 ounces of fish, of which only 0.07 ounces is from oily fish, per day (39).

Key Point: The absolute intake of EPA and DHA is more important than the dietary ratio of omega-6 and omega-3. However, intake levels of EPA and DHA are low in much of the world.

How Can We Get More EPA and DHA Omega-3 From Our Diet?

The best and most reliable way to get more EPA and DHA from food is to increase our oily fish consumption.

For a helping hand in this area, here are some of the most omega-3-rich fish options.

Fish oil supplements that provide decent amounts of EPA/DHA are also good options for those that don’t like fish.

Most health organizations tend to recommend consuming at least 250-500 mg EPA and DHA per day:

However, some countries advise consuming much higher amounts. This resource shows the global recommendations for EPA and DHA from different countries around the world.

Considerations For Vegans and Vegetarians

It can be difficult to find sources of EPA and DHA on a vegan diet.

However, microalgae supplements (known as algal oil) are a vegan-friendly source of preformed EPA and DHA (42).

As with fish oil supplements, look for a product that contains a good amount of EPA and DHA.

That said, research has shown that the actual amount of EPA and DHA in omega-3 supplements can often differ from the label claims (43).

As a result, it is important to choose a reputable brand: the website Labdoor provides a guide to popular fish oil and vegan omega-3 supplements. This analysis covers whether or not the supplements meet their label claims and their degree of heavy metal contamination, so it is a good way of checking how reputable a specific supplement is.

Key Point: Seafood, fish oil supplements, and algal oil are the most reliable sources of EPA and DHA.

As covered in this article, here is a summary of the main take-home points: