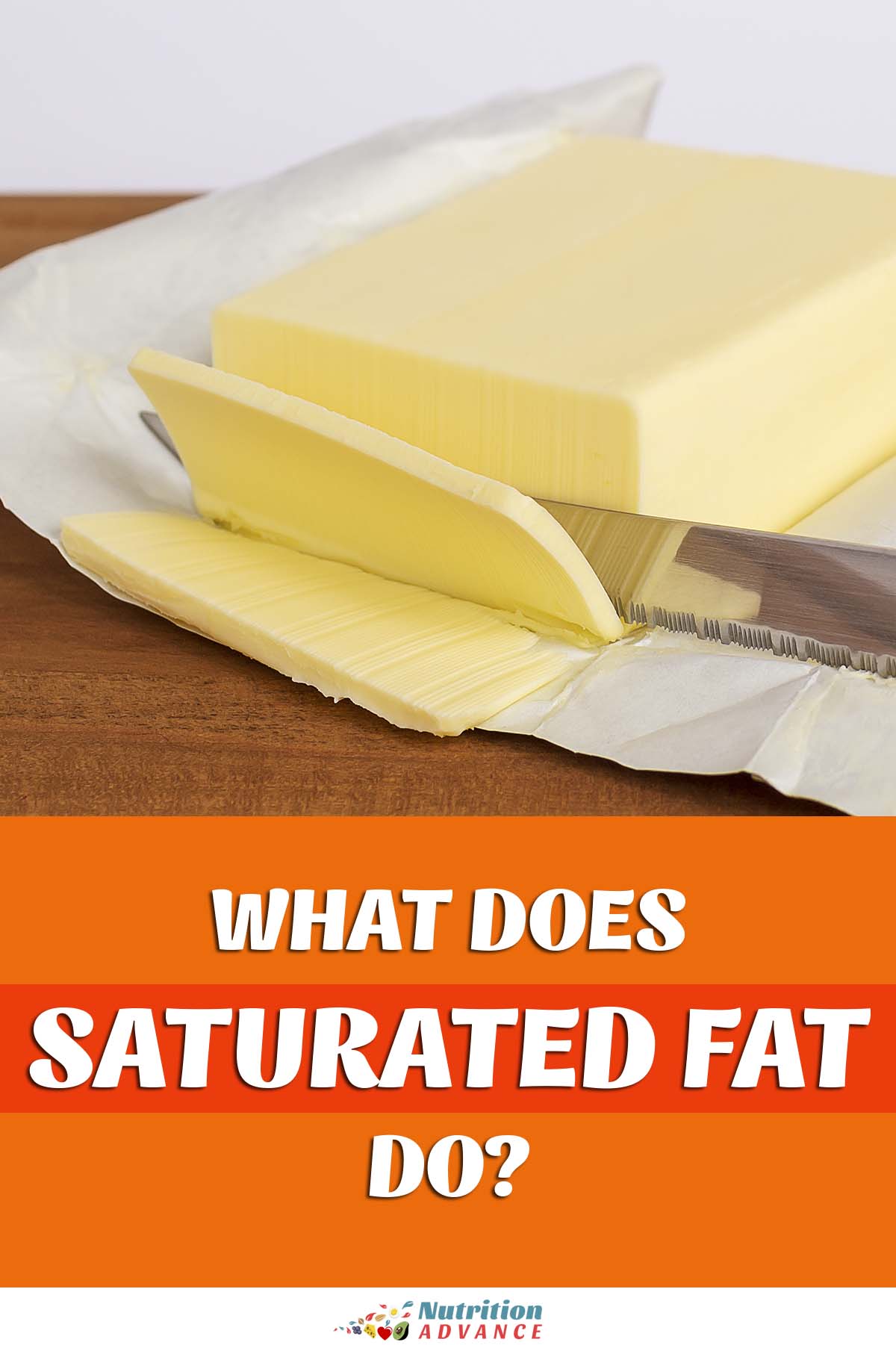 Saturated fat is a topic that causes a lot of confusion for many people.

Unfortunately, this type of fat has an undeserved reputation for ‘clogging arteries’ in the media.

However, in reasonable amounts, saturated fat is a perfectly normal component of food.

This article will explain what saturated fat is, what it does, and the potential benefits and drawbacks it can have.

What Is Saturated Fat? 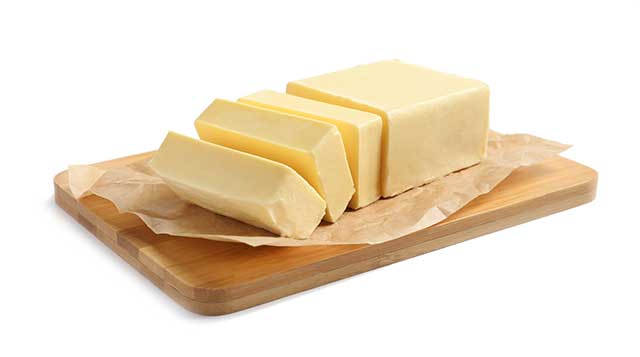 First of all, saturated fat is not just one thing, and there are many different kinds of saturated fatty acids.

Furthermore, each of these saturated fatty acids has different effects.

For this reason, care is necessary when discussing how ‘saturated fat’ has a specific effect.

What Are Saturated Fatty Acids?

The most important difference between saturated fat and other fats is that saturated fatty acids contain only single carbon to carbon bonds in their backbone.

To understand this further, see the diagram below;

As shown in the diagram, you can see single bonds between the carbon (C) atoms.

These carbon atoms are fully surrounded—or saturated—by hydrogen (H) atoms, which are attached to each carbon atom.

In contrast, an unsaturated fatty acid contains double bonds between the carbon atoms, as shown below;

The double bond(s) means that some carbon atoms are not connected to a hydrogen atom, and thus are not fully saturated.

In the table below, you can find a list of the different saturated fatty acids along with their common name, organic chemical (IUPAC) name, and their structure.

The ‘C’ in the structure refers to how many carbon atoms each of the fats contains. The ‘0’ refers to the (zero) number of double bonds.

These terms just refer to the number of carbon chains in the fat;

The Most Common Saturated Fatty Acids In Food

Not all the saturated fatty acids in the above table are common in food.

The following table shows the most common dietary saturated fatty acids and some of the foods that contain them;

However, it is worth pointing out that not all saturated fatty acids have this effect.

Among the saturated fatty acids, those that cause the most significant rise in LDL levels include (2, 3, 4, 5);

Additionally, irrespective of the saturated fatty acids present, the overall nutritional profile of specific food can affect whether that food raises LDL.

The reason for this is something called the milk fat globule membrane, which is still intact in lesser processed dairy products like milk, cheese, and cream (7, 8).

Research suggests that other saturated fats, such as stearic acid, may lower LDL levels (9).

Does Saturated Fat Cause Cardiovascular Disease?

Generally speaking, the idea that saturated fat is inherently bad for the heart follows this line of thought;

But is this correct?

If we look at the existing research, it is true that higher saturated fat intake (generally) tends to raise LDL (10).

It is also true that LDL is associated with higher rates of cardiovascular disease (11).

However, remember that association does not equal causation.

That said, some systematic reviews do suggest that replacing saturated fat with other fats may lower cardiovascular risk (14, 15).

In addition to the effects on LDL levels, saturated fat also seems to influence the size of LDL particles.

Some researchers believe that larger LDL particles are not as atherogenic (causational in cardiovascular disease) as small, dense particles.

This HDL-raising effect is particularly true for lauric acid, which increases HDL levels by a significant amount (18).

Such changes also improve the ratio of total cholesterol to HDL cholesterol, which some researchers believe is more important than LDL levels alone (19, 20).

What Does Saturated Fat Do In the Body? 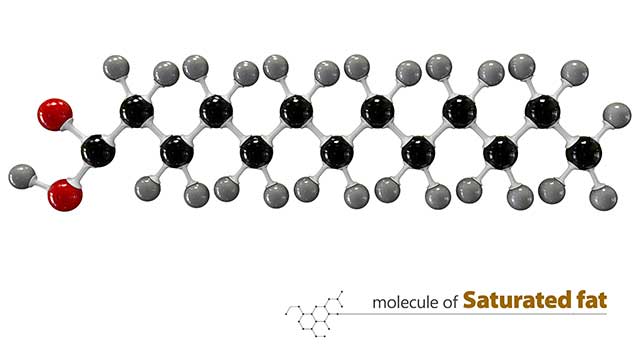 Saturated fat is not essential, and the only essential fatty acids are omega-3 and omega-6 (21).

However, saturated fatty acids still have various functions within the human body.

For instance, saturated fat plays (or may play) a role in;

Overfeeding On Saturated Fat May Be Harmful To the Liver

Although saturated fat is fine in reasonable amounts, studies show that overfeeding on it can cause harm to the liver (28, 29).

In the above-referenced studies, participants consumed a surplus 1000 calories from saturated fat every day for three weeks. This overfeeding resulted in worsened markers of non-alcoholic fatty liver disease.

Bear in mind: these harms were seen in studies that overfed the participants by 1000 calories per day with saturated fat.

Therefore, this does not mean that including foods that contain saturated fat in the diet—such as beef, cheese, or olives—is bad for you.

However, it does show that overeating saturated fat can be harmful. In truth, too much of any food will cause problems.

That said, there has been a prevalent myth in recent years that unlimited fat diets don’t have any adverse effects.

This is not true.

Key Point: Like with any food/nutrient, overfeeding on saturated fat can cause problems.

A good point about saturated fatty acids is that they are the most stable of all fats, and they are highly resistant to heat-induced oxidation (30, 31).

In contrast, vegetable oils are extremely high in omega-6 fatty acids, which have the lowest oxidative stability out of all fats.

Research indicates that cooking with them at high temperatures can form various oxidation products (32, 33).

For this reason, some researchers believe that saturated fats—such as butter, ghee, and other animal fats—are a good choice of cooking fat.

Over the past forty years until around 2013-2014, saturated fats were widely thought to be one of the main causes of cardiovascular disease (35).

For this reason, the dietary guidelines advised us to cut down on our saturated fat intake.

However, an important consideration here is this; when we removed saturated fat from our diets, it needed replacing.

What did we replace it with?

Unfortunately, it turned out that the majority of people who lowered their saturated fat intake replaced it with refined carbohydrate (36).

As shown in the above-referenced study, this swap did not improve cardiovascular outcomes and was even positively associated with higher cardiovascular risk.

One of the reasons for this may be that diets high in refined carbohydrate have adverse effects on blood glucose regulation and appear to raise cardiovascular risk (37, 38).

All in all, saturated fats can be part of a healthy dietary pattern, and we shouldn’t fear foods that contain them.

However, that doesn’t mean we should eat them in unlimited amounts either.

For more on dietary fat, see this guide to omega-3.

4 thoughts on “What Is Saturated Fat and What Does It Do?”