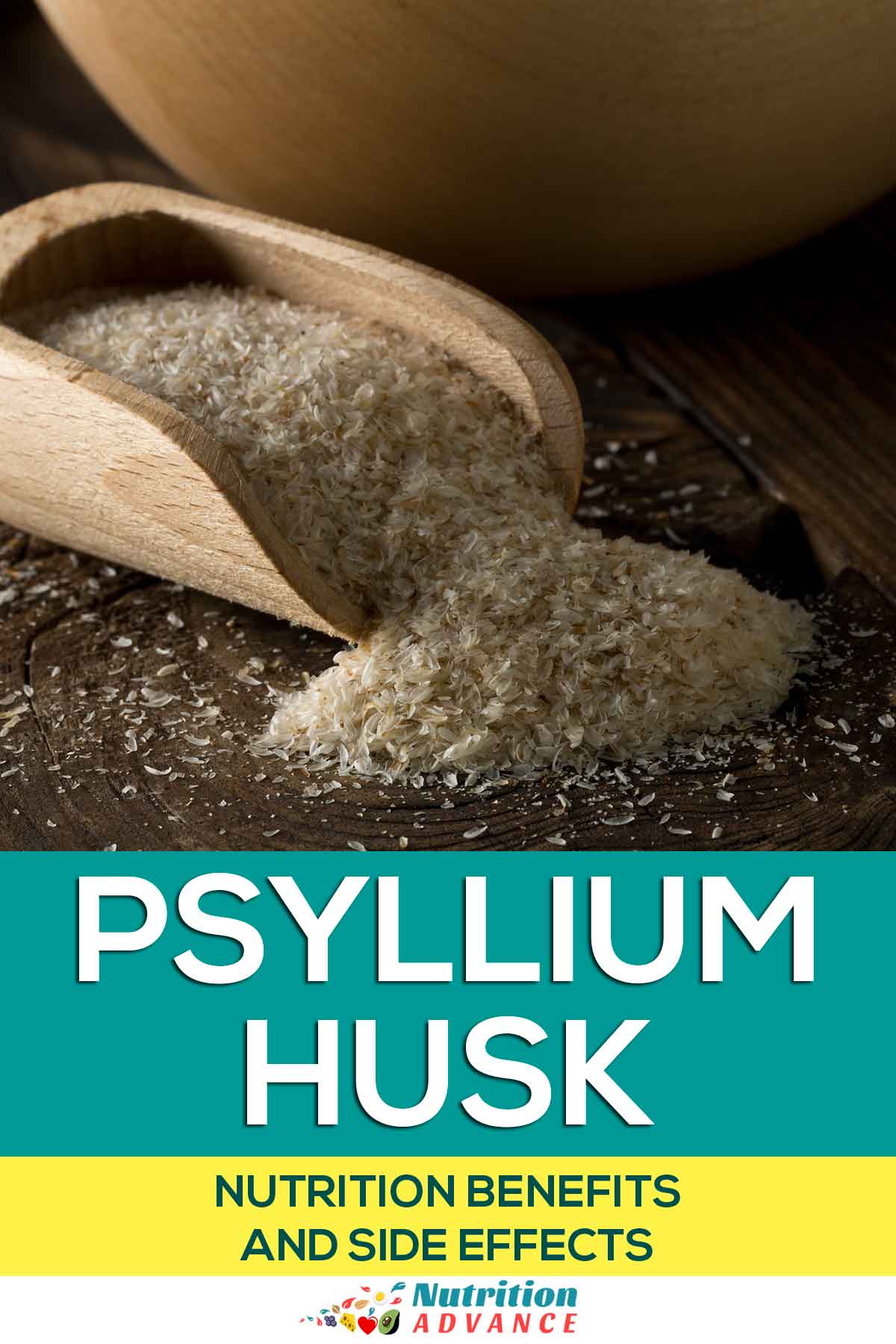 Psyllium husk is a concentrated source of dietary fiber.

Often used as a fiber supplement, psyllium is also known by the brand name of Metamucil.

However, psyllium husk has many different uses.

For one thing, it is a common thickener in the food industry. Some people also use psyllium alongside low carb flours to make baking products with a wheat-like texture.

In this article, we explain what psyllium is, how to use it, its nutrition benefits, and potential side effects.

What Is Psyllium Husk? 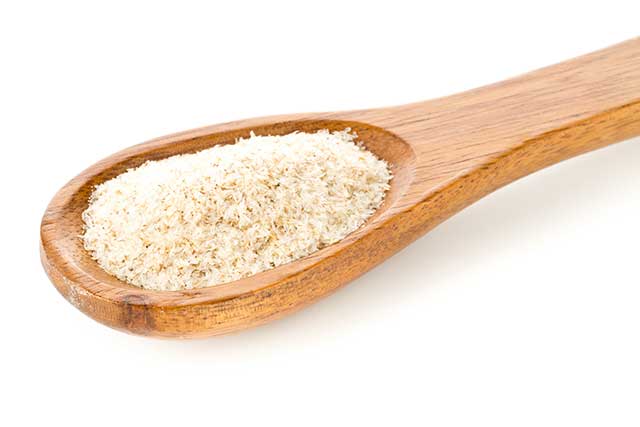 Psyllium husk is a type of dietary fiber that comes from the seeds of the Plantago ovata plant.

This plant grows around the world, and producers obtain the fiber by grinding the outer layers (i.e., “husks”) of psyllium seeds.

Psyllium contains a hemicellulose fiber called arabinoxylan, a type of viscous water-soluble fiber that attracts and binds with water (1).

After absorbing water, psyllium forms a clear, gel-like substance that increases in volume by up to 10x the starting volume (2).

Psyllium is bulk-forming, the small intestine does not digest it, and it absorbs water as it passes through the digestive system.

What Is Psyllium Used For?

Due to its characteristics, psyllium husk has several potential uses.

Bakers often use psyllium to thicken bread products and cakes.

Using psyllium in this way absorbs moisture and helps to give the finished product a dense, thicker texture.

There are also many low carb bread recipes that use psyllium to achieve the typical thickness of regular bread.

2) As a Commercial Thickener

Psyllium husk enjoys popularity as a thickener in the food industry.

Many companies use it, and research shows that common foods like ice-creams, cakes, frozen desserts, and milkshake products use psyllium (3).

Many people choose to take psyllium husk as a dietary supplement for its purported health benefits.

There are many claims about how psyllium can help improve conditions like constipation, blood glucose levels, and more.

We will examine these claims—and the evidence for them—in more detail later.

Key Point: Psyllium is a fiber extracted from Plantago ovata seeds. It is a soluble fiber that escapes digestion and absorbs water.

In the following table, you can see the full nutrition profile for ground psyllium husk.

These values are based on a serving size of one tablespoon (approximately eight grams).

The source of the nutrition data is the NCC Food and Nutrient Database.

Since our body does not digest the carbohydrate in psyllium husk, it contains zero ‘net carbs’ (total carbohydrate minus fiber) per serving.

As shown in the table, psyllium is not a particularly good source of vitamins and minerals.

However, it does contain small amounts of calcium and manganese.

Psyllium husk is one of the most popular supplements, so why do people use it?

Here are some potential benefits of this dietary fiber.

Psyllium is capable of slowing the post-meal release of blood glucose.

When taken alongside a carbohydrate-rich meal (or snack), the fiber in psyllium slows down the breakdown of carbohydrates into glucose, thereby improving the glycemic response (4).

In a randomized controlled trial featuring forty patients with type 2 diabetes, 10.5 grams of psyllium, supplemented daily, led to improvements in (5);

A further study looked into this topic and found similar results.

In a study of 34 men with type 2 diabetes, 5.1 grams of psyllium twice daily led to 11% lower postprandial glucose levels (6).

Since psyllium is a bulking agent, it can help with feelings of fullness and satiety.

As a result, supplementing with psyllium may potentially encourage weight loss.

There are several studies in this area too, and they demonstrate that the fiber may be helpful for weight loss purposes.

Additionally, randomized controlled trials on psyllium and weight loss do show some signs of effectiveness.

For instance, in an intervention study lasting one year, participants took five grams of psyllium before each meal daily. The participants did not change any other dietary habits.

Compared to participants in a rice flour placebo group, individuals taking psyllium lost an average of 1.4 kilograms more weight over the year (8).

Key Point: Psyllium may increase satiety and reduce feelings of hunger, and this may potentially lead to small amounts of weight loss. 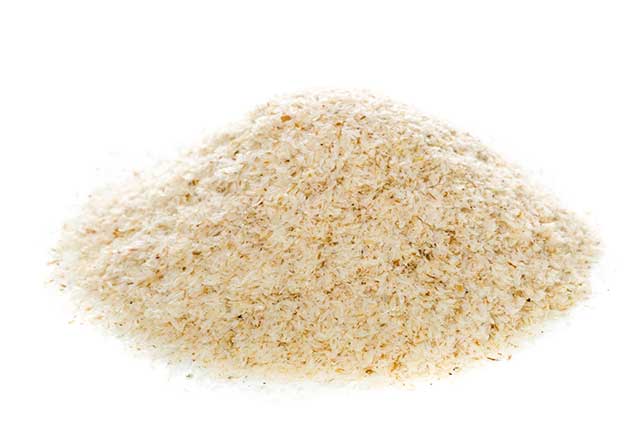 There is some evidence that psyllium husk supplementation may slightly reduce blood pressure.

However, there is not a significant amount of high-level research in this area.

That said, a systematic review and meta-analysis of existing randomized controlled trials demonstrated that psyllium supplementation has an “overall lowering effect” on systolic and diastolic blood pressure (9).

4) May Help With Diarrhea (Inconsistent Research)

On the positive side, some studies show that psyllium supplementation can improve stool consistency in diarrhea patients (11, 12).

However, research is inconsistent in this area.

In contrast to the above studies, a recent randomized trial of eighty-three individuals found that 15 grams of psyllium per day had no benefits on reducing diarrhea incidence (13).

Notably, though, this study was in elderly patients fed by enteral tube, and may not be representative of how psyllium affects otherwise healthy individuals.

Key Point: Psyllium husk could potentially help relieve diarrhea symptoms. However, the research base is small, and the evidence is inconsistent.

5) May Help To Relieve Constipation

Constipation can cause a great deal of discomfort, and unfortunately, in some cases, it can occur chronically.

In this situation, fiber supplements such as psyllium husk can sometimes be beneficial.

The reason for this is because psyllium absorbs water, and it helps to increase the size (and water content) of stools.

Key Point: Psyllium may be a useful tool for improving symptoms of diarrhea.

Association does not necessarily infer causation, but higher levels of low-density lipoprotein (“LDL cholesterol”) are associated with increased cardiovascular risk (15).

There are many different theories on what the most significant risk factors for cardiovascular disease are.

For instance, some researchers believe high triglyceride levels and higher levels of fasting glucose and insulin may be more significant risk factors than LDL-C alone (16, 17).

However, LDL-C is still associated with cardiovascular risk, and some people are uncomfortable with having high levels of this lipoprotein.

Aside from dietary changes, there are other LDL-lowering options available, and these include psyllium supplementation.

Interestingly, numerous controlled studies show that supplementing with psyllium can significantly decrease concentrations of LDL cholesterol. This reduction appears to sit between 5-10% depending on the study (18, 19, 20).

Furthermore, a recent systematic review and meta-analysis of randomized controlled trials confirmed that psyllium has a significant LDL-lowering effect (21).

7) May Potentially Improve Symptoms of IBS

Irritable bowel syndrome, otherwise known as IBS, can cause a lot of stress, pain, and gastrointestinal symptoms such as bloating and cramping.

Although IBS is a complex condition that affects different people in different ways, research suggests that, in some cases, psyllium husk can provide benefits (22, 23).

In a systematic review of 14 randomized controlled trials, psyllium supplementation had a significant beneficial effect on reducing the severity of IBS symptoms (24).

Drawbacks, Concerns, and Side Effects

Although psyllium husk can have some beneficial health impacts, care is necessary when supplementing with pure fiber.

Here are some potential negative considerations about psyllium.

1) Psyllium Can Increase the Risk of Bezoars (Intestinal Blockage)

It sounds scary, but excessive intake of psyllium can potentially lead to something called a bezoar.

To be direct; a bezoar is a type of intestinal blockage caused by a mass of fiber/indigestible ingredients (25).

Unfortunately, case reports show that on some occasions, psyllium has been the cause of this condition (26, 27, 28).

However, it is worth noting that bezoars are incredibly rare, and the chance of experiencing this condition is low.

As always, it is crucial to stick to the recommended dose for any supplement. Sufficient water should be consumed when supplementing with psyllium.

In some cases, these reactions have been serious enough to cause anaphylactic shock (severe allergic reaction) (29, 30).

The likely cause of this allergy is specific proteins found in psyllium seeds (31).

It is essential to seek medical attention if anyone suspects they are having an allergic reaction.

3) Psyllium Can Be a Choking Hazard

Psyllium could potentially be a risk for choking if it were to absorb water and bulk up in the throat.

For this reason, it is important to take psyllium husk with a sufficient amount of water (rather than swallowing it down dry).

According to the advice given to participants in intervention studies using psyllium, they were instructed to take their psyllium dose with 150 ml of water (32).

4) Other Fiber Sources May Be More Beneficial (For Constipation)

With a specific focus on constipation, fiber from fruit and vegetables may be more effective than supplementing with psyllium.

For instance, a systematic review of randomized studies shows that prunes were more effective for improving stool frequency and consistency than psyllium (33).

Key Point: Psyllium can have a variety of side effects, particularly in excess or when dosage instructions are not followed.

Where To Buy Psyllium Husk

While there are numerous different psyllium products available, the pure psyllium husk powder offers the best value for money.

It is possible to buy this product in health stores, larger grocery stores/supermarkets, and it is also available online.

Overall, psyllium husk is a useful supplement that may have several valuable benefits.

However, we should not see supplements like this as a substitute for a healthy diet.

While psyllium can potentially help with health markers like blood pressure and blood glucose levels, a healthy diet should always be the priority.

For another excellent fiber source, see this coconut flour guide.

2 thoughts on “Psyllium Husk: Nutrition Benefits and Side Effects”