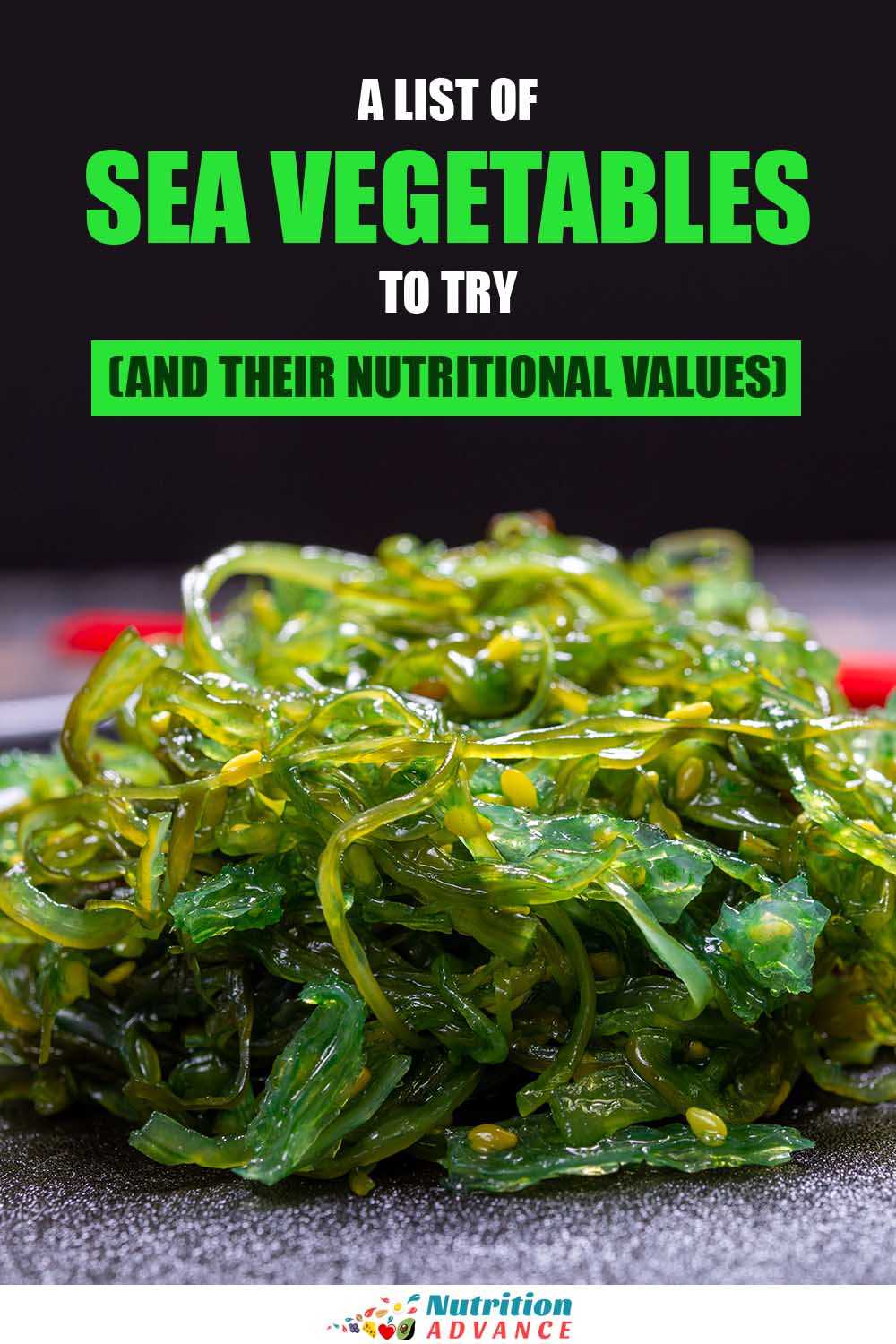 We can often hear advice about how seafood is a nutritious group of foods to include in our diet.

However, most of us forget that seafood also includes the various vegetables that grow in the sea. Furthermore, when most of us think about sea vegetables, one word often comes to mind: “seaweed.”

The truth is that there are hundreds of different varieties of sea vegetables, and most people don’t know them by name.

This article examines some of the most common edible sea vegetables in the world, where they’re found, and how to use them.

What Are Sea Vegetables?

Sea vegetables are otherwise known as edible seaweed that come from the sea.

Generally, seaweed refers to three main types of algae, as listed below (1):

Sea vegetables are consumed around the world, but they are particularly popular in Asia. According to the Food and Agriculture Organization (FAO) of the United Nations, the biggest consumers of sea vegetables are China, Japan, and South Korea (2).

However, due to the growing popularity of Japanese cuisine, these vegetables from the sea are becoming increasingly popular.

All forms of seaweed tend to be extremely nutrient-dense, which means that they offer a broad range of vitamins and minerals for very few calories. They also contain some unique polyphenols and other phytonutrients that may have potential benefits (3, 4, 5).

Key Point: Sea vegetables are edible forms of seaweed from the ocean. There are hundreds of different varieties, and they may have some potential health benefits.

In this section, we will look at some of the most popular sea vegetable varieties from around the world.

Sometimes known just as green laver, the Japanese name of aonori refers to a type of green algae.

Aonori is popular in East Asian nations where it is cultivated, including Korea, Japan, and Taiwan.

However, its flavorful dried and powdered form, which can be used to season various dishes, is available worldwide. This product is sometimes known as ‘aonori flakes.’

Eisenia bicyclis, commonly known as arame, is a type of brown algae. Processed, packaged, and sold in a dried state, arame typically has a dark and brittle appearance.

This sea vegetable is often added to soups and stews as seasoning. As the water boils, the seaweed reconstitutes and starts adding a lot of flavor to the dish, with hints of umami-like flavors and a slight saltiness.

Arame can also be cut into long thin strips and then used as a flavor-enhancing ingredient in stir-fries.

Alaria esculenta, more commonly known as badderlocks or winged kelp, is a popular form of green algae that grows worldwide.

Dabberlocks is a type of ‘kelp,’ which refers to large brown algae. As shown in the above illustration, this sea vegetable has a long leaf-like appearance.

Although it grows all around the world, badderlocks is particularly concentrated around the British Isles (6).

Traditionally, badderlocks is consumed either raw or cooked in soups, stews, salads, and stir-fries.

Palmaria palmata, better known as dulse, is a sea vegetable that belongs to the red algae family.

Dulse can be found in oceans around the world, and interestingly, this red seaweed may offer more protein than most other sea vegetables.

People use dulse in various ways:

Pyropia and Porphyra are forms of red algae.

Seaweed belonging to the species of Pyropia and Porphyra is commonly used in East Asia to make dried seaweed sheets. These products are known by the names of ‘nori’ in Japan and ‘Gim’ in Korea.

Interestingly, these dried seaweed products have been demonstrated to contain a rare plant source of vitamin B12 (8).

However, the Academy of Nutrition and Dietetics has stated that nori “cannot be relied upon as an adequate or practical source of B-12” and that vegans should consume supplements or fortified foods (9).

There are lots of interesting ways to use nori sheets:

Eucheuma is a type of algae that can grow in three different colors: brown, green, or red.

This sea vegetable is mostly cultivated in the Philippines as a food source and also for carrageenan production (10).

Sometimes known as guso, this seaweed is a popular ingredient in ‘seaweed salad’ dishes in the Philippines (11).

Here is a good example recipe for a eucheuma seaweed salad.

Hijiki is a traditional sea vegetable that has been consumed in East Asia for centuries, and it is a form of brown algae.

After being harvested, hijiki is usually boiled and then dried, after which it develops a dark color. When it is time to cook hijiki, the dried seaweed should be soaked in water and then cooked as part of a dish (or to be eaten alone).

As with most seaweed, hijiki is an excellent source of fiber, vitamins, and minerals. That said, there have been some concerns over hijiki consumption in recent years.

These concerns revolve around the high levels of inorganic arsenic, which is a human carcinogen, that hijiki can contain (12, 13).

Due to these concerns and animal studies showing that arsenic accumulates in rats fed hijiki, several governmental agencies have advised their citizens to avoid the consumption of hijiki. These agencies include the United Kingdom’s Food Standards Agency (FSA) (14).

Chondrus crispus is a type of red algae more commonly known as Irish moss. This sea vegetable has a reddish-purple color, and it is a rich source of fiber, protein, vitamins, minerals, and polyphenols (15).

Despite the name, Irish moss grows from the United States to Southern Europe, and as far East as Japan (16).

Like many other seaweeds, Irish moss tends to be used in soups and stews rather than eaten fresh. Irish moss is also used to produce significant amounts of carrageenan, a thickener used within the food industry (17).

Kombu is a form of large brown algae, a group commonly known as kelp.

We can find kombu in oceans around the world, but it is most extensively cultivated in China, Japan, and Korea (18).

Kombu has a tough texture, it is thick, and it takes a long time to soften when boiling it in water. However, it works well for seasoning purposes and its flavors work well in soups and stews.

It is also possible to make a stock using kombu. Known as ‘kombu dashi’ in Japanese, we can use this flavor-enhancing stock as a base ingredient for various soups and stews.

There is a useful guide on how to make it here.

An important point to note about kombu is that it offers extremely high levels of iodine, which can be positive and negative.

While it is an excellent source of the mineral, due to the significant iodine levels it contains, it can be easy to consume too much iodine. For instance, research has shown that per dried gram, kombu can contain as much as 2353 mcg of iodine (19).

In contrast, the FDA’s recommended daily value for iodine is set at only 150 mcg per day (20).

Laminaria digitata, known by the common name of oarweed, is a type of large brown algae (kelp).

This sea vegetable grows in the North Atlantic region, and it is prevalent around the United Kingdom, France, Denmark, Sweden, Norway, Finland, and Iceland (21).

Similar to other types of brown seaweed such as kombu, oarweed is commonly used to add flavor to soups and stews or to make a seaweed stock.

Species of Gracilaria are red algae sea vegetables, and they are more commonly known as ogonori or ‘ogo’ for short.

Ogonori grows around the world. However, as with many varieties of seaweed, China, Japan, and Korea are some of the biggest producers.

This seaweed may be consumed either by itself or in ‘seaweed salads’ or in soups and stews.

Caulerpa lentillifera is better known by the names sea grapes and green caviar, and it is a type of green algae.

These names make sense, as this marine vegetable does look like small balls of green caviar.

The commercial cultivation of sea grapes is exclusive to Asia, and most of it comes from Japan and the Philippines.

Sea grapes contain a range of beneficial nutrients, and based on animal research, their intake may potentially have benefits (22).

However, there is a lack of human research on this food. Furthermore, one potential problem with sea grapes is that food poisoning can be an issue, so the seaweed requires careful and appropriate storage (23).

Ulva lactuca, or sea lettuce, is a type of green algae that grows around coastlines globally.

Research into sea lettuce has demonstrated that it contains a broad range of minerals in significant amounts (24).

On the downside, depending on where it grows, sea lettuce can also be a source of heavy metals such as lead (25).

Wakame is one of the most popular sea vegetables in the world, and it is a variety of kelp (large brown algae).

This seaweed features in some famous international dishes such as miso soup (Japan) and seaweed soup (Korea).

If fresh wakame is not available locally, it should be easy to find a dried imported version to buy. This simply needs to be rehydrated by placing it in hot water for around five minutes or so.

Several studies have investigated the potential health effects of wakame. A recent human trial suggested that wakame may have benefits for the management of blood glucose and insulin levels (26).

Is spirulina a sea vegetable?

Spirulina is a chlorophyll-rich blue-green algae, but it grows in freshwater rather than the ocean. It has an excellent nutritional profile, and some people may find it beneficial, but it is not technically a sea vegetable.

What is the difference between seaweed and sea vegetables?

Technically, sea vegetables and seaweed are very similar. They are both forms of marine algae that grow in oceans around the world. However, sea vegetables only grow in the ocean, and we do not find them in freshwater lakes and rivers. Furthermore, not all types of ‘seaweed’ are edible.

What is the difference between kelp and kombu?

Aside from both being similar-sized Japanese words starting with a K, kelp and kombu have quite different meanings. Kelp refers to the whole group of sea vegetables of the order Laminariales (large brown algae). In contrast, kombu is a specific type of kelp – others include arame, oarweed, and wakame.

Where can you buy sea vegetables?

Sea vegetables such as kombu and wakame can add a lot of flavor to food, and they can thicken soups and stews.

In addition to this, seaweeds offer a wealth of essential nutrients, including high levels of iodine, calcium, magnesium, and folate.

For those that enjoy their taste, sea vegetables have a lot to offer. Including them in the diet from time to time can contribute a range of culinary and nutritional benefits.