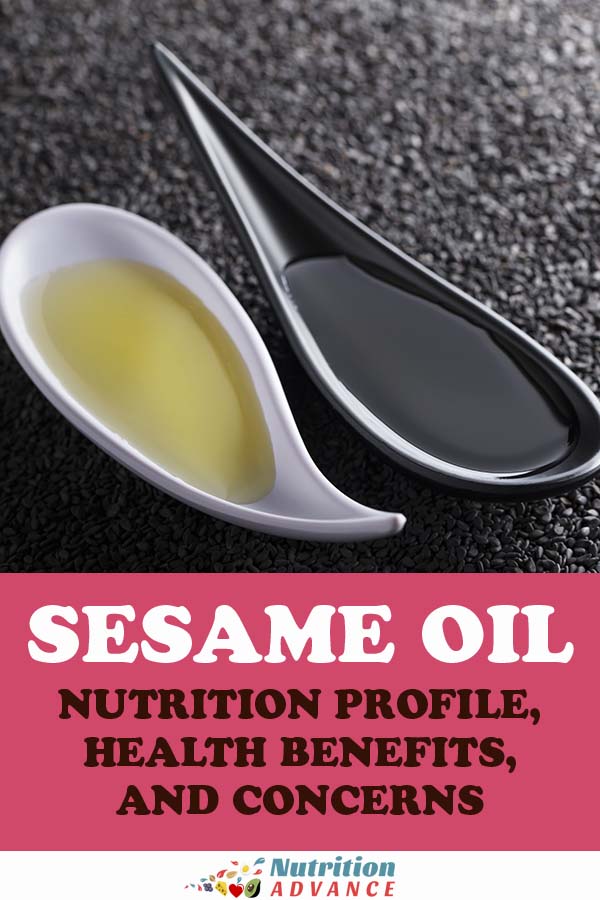 Sesame oil is the best-tasting oil in the world, and it imparts a delicious flavor to food.

Unlike most oils, cooks use sesame oil more as a condiment—a flavoring aid—rather than as cooking oil.

There is no arguing that sesame oil is tasty, but is it healthy?

This article takes an in-depth look at the oil’s nutrition profile, benefits, and concerns.

What Is Sesame Oil? 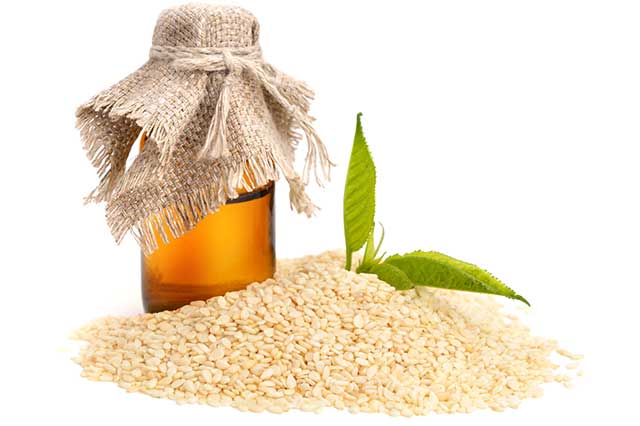 In contrast to most vegetable/seed oils, sesame oil has a naturally nutty and flavorful taste, and it does not require refining to make it edible.

A lot of sesame oil is pressed at a low heat and then bottled ready for sale. However, some manufacturers use a solvent-extraction process to make their oil.

Generally speaking, the reason for using such refining processes is that it requires less time, effort, and money.

Unrefined, freshly pressed sesame oil has a light and nutty flavor, and it can be yellow to amber or dark brown.

On the other hand, refined sesame oil has no real flavor, and it has a light color similar to other vegetable oils.

Sesame oil is most popular in Asia and the Middle East, and it plays a big part in Chinese, Korean, and Japanese cooking.

In addition to the refined and unrefined versions, there are different categories of sesame oil too.

These different varieties include;

Key Point: Sesame oil is a flavorful oil used for seasoning, and the appearance and taste depend on the oil’s processing.

However, the tables below show all the significant nutritional values.

All values are per tablespoon and based on the USDA’s Food Composite Database (1).

Sesame oil provides 119 calories per tablespoon, and it does not contain any carbohydrate or protein.

The fatty acid composition is mainly monounsaturated and polyunsaturated fat, and the oil contains a large amount of omega-6.

A tablespoon of sesame oil provides a small amount of vitamins E and K.

Sesame oil does not contain any minerals. 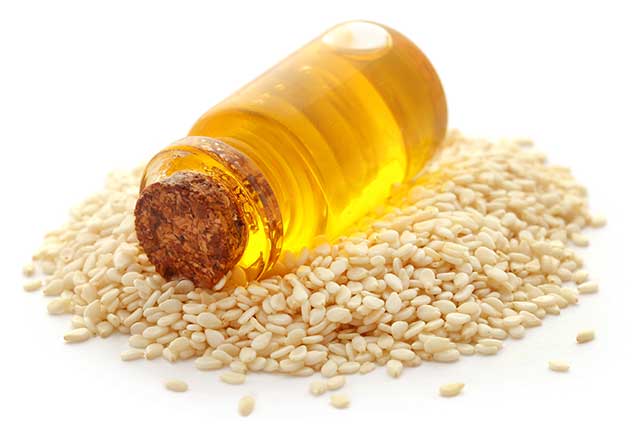 Many of the often-claimed benefits of sesame oil, such as the vitamins it contains, are not worth considering.

For example; vitamin E is beneficial for our health, but 1% of the RDI is not going to have much of an effect.

However, of the numerous studies looking into potential health benefits of sesame oil, there are some interesting findings.

These positive findings revolve around the lipid (cholesterol) profile and anti-inflammatory effects.

There are many opposing viewpoints when it comes to cholesterol and the lipid profile, but there are two things that all the experts agree on;

According to Dr. Thomas Dayspring, an influential cardiovascular researcher, the science on “good cholesterol” (HDL) versus “bad cholesterol” (LDL) may be too simplistic, as it appears the specific LDL particle type is the most important factor (8).

2) Sesame Oil Is More Heat-Stable Than Other Seed Oils

First of all, sesame oil is not as heat-stable as animal fats and cooking oils such as avocado, coconut, and extra virgin olive oil.

To be 100% clear; it is not the best option for high-heat cooking.

That said, sesame oil appears to provide better heat-stability than many other common “vegetable” (seed) oils.

Considering that sesame oil is relatively high in polyunsaturated fat (41.5%), we would expect it to be susceptible to heat-induced damage.

However, due to the polyphenols it contains, sesame oil appears to be somewhat resistant to oxidation. 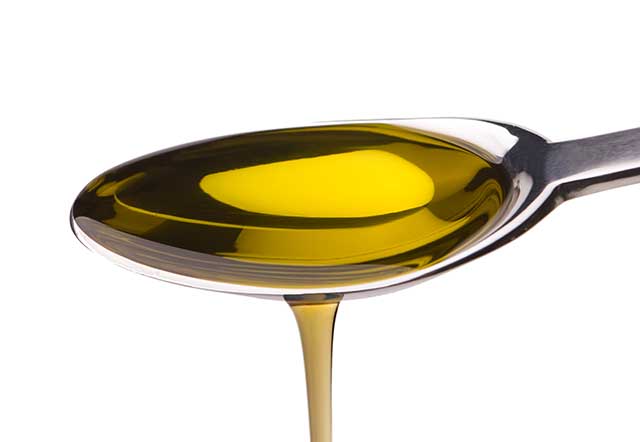 In a trial comparing sesame to soybean oil, the sesame oil displayed significantly better oxidative stability than the soybean oil (9).

Another study examining the antioxidant properties of sesame oil made a similar finding.

In this study, adding roasted sesame oil to either soybean or sunflower oil increased the antioxidative properties and thermal resistance of each oil (11).

Overall, sesame oil has a higher monounsaturated fat and polyphenol content than other seed oils, and this likely plays a role in its higher resistance to oxidation.

However, this is not a reason to use it for cooking, and there are far more heat-stable oils for this purpose.

We will look at the best way to use sesame oil a little later in this article.

Key Point: Sesame oil offers better oxidative resistance than other vegetable oils, but it is far from being the most heat-stable oil.

Take this one with a pinch of salt, but numerous rat studies have demonstrated that sesame oil may have anti-inflammatory properties.

In these studies, rats suffering from induced oxidative stress were supplied with sesame oil orally.

Compared to the (control group) rats who did not receive sesame oil, oxidative stress was consistently and “significantly attenuated” in the rats receiving sesame oil (12, 13, 14).

Researchers believe that sesamol, a lignan contained within sesame oil, is responsible for these protective effects against inflammatory damage.

However, we cannot assume that animal experiments apply to humans, so further human trials are necessary.

Key Point: Sesame oil may have anti-inflammatory properties, but further human research is required to confirm this.

Nothing in nutrition is black and white, and there are some concerns about sesame oil to be aware of. 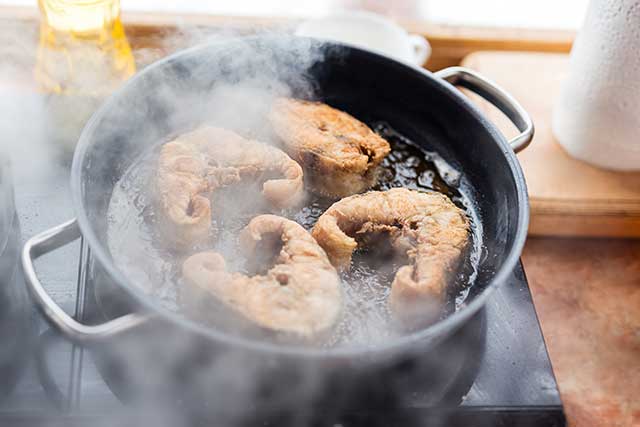 However, it is still not suitable for high-heat cooking.

For example, studies show that;

These findings demonstrate that although sesame oil has some resistance to oxidation, it is not one of the better cooking oils.

According to laboratory tests, coconut oil and extra virgin olive oil are the two most heat-stable oils (18).

Fats higher in saturated fats such as butter, ghee, and tallow are also heat-stable options for cooking.

A second potential concern about sesame oil is the imbalance of omega-6 to omega-3 that it supplies.

As an occasional ingredient in a Chinese-style dish, this is not something worth worrying over.

However, regular consumption of large amounts of sesame oil may create an imbalance between omega-6 and omega-3.

Notably, most of us are already consuming far too much omega-6 to omega-3, and researchers believe this ratio may even be over 20 to 1 (19).

The problem here is that too much omega-6 and not enough omega-3 may potentially create a pro-inflammatory environment (20).

Additionally, an imbalance in favor of omega-6 largely inhibits the conversion and absorption of plant sources of omega-3 (ALA) (21).

How To Use Sesame Oil

Since we have established it is better to use sesame oil as a condiment, here are some different ways we can use it.

1) Add It At the End of Stir-Frying

Just because sesame oil isn’t well-suited to high heat cooking does not mean that we can’t use it in stir-fries.

Traditionally, the chef adds the oil near the end of cooking (which also better preserves the flavor).

In other words; use coconut oil or olive oil for the stir-frying part, and stir in some sesame oil at the end for its flavor.

2) Use It In a Marinade or Dressing

For a tasty marinade or dressing, try combining the following ingredients in a bowl;

This recipe makes an excellent marinade for steak or other types of red meat.

Add some sesame oil into a soup or stew to impart its nutty and flavorful taste; a little goes a long way.

We can also use sesame oil in the same way that we would use salt, pepper, or a sauce.

This tasty oil adds a lot to almost any food, and adding a few drops would likely improve any meal.

Key Point: There are many different ways to use sesame oil, and works well as a condiment with almost any food.

Overall, sesame oil has a mixture of benefits and drawbacks.

It is probably better to avoid using it for high-heat cooking, but it is a very flavorful condiment that adds a lot of taste to food.

For more tasty condiments, see this complete guide to kimchi.