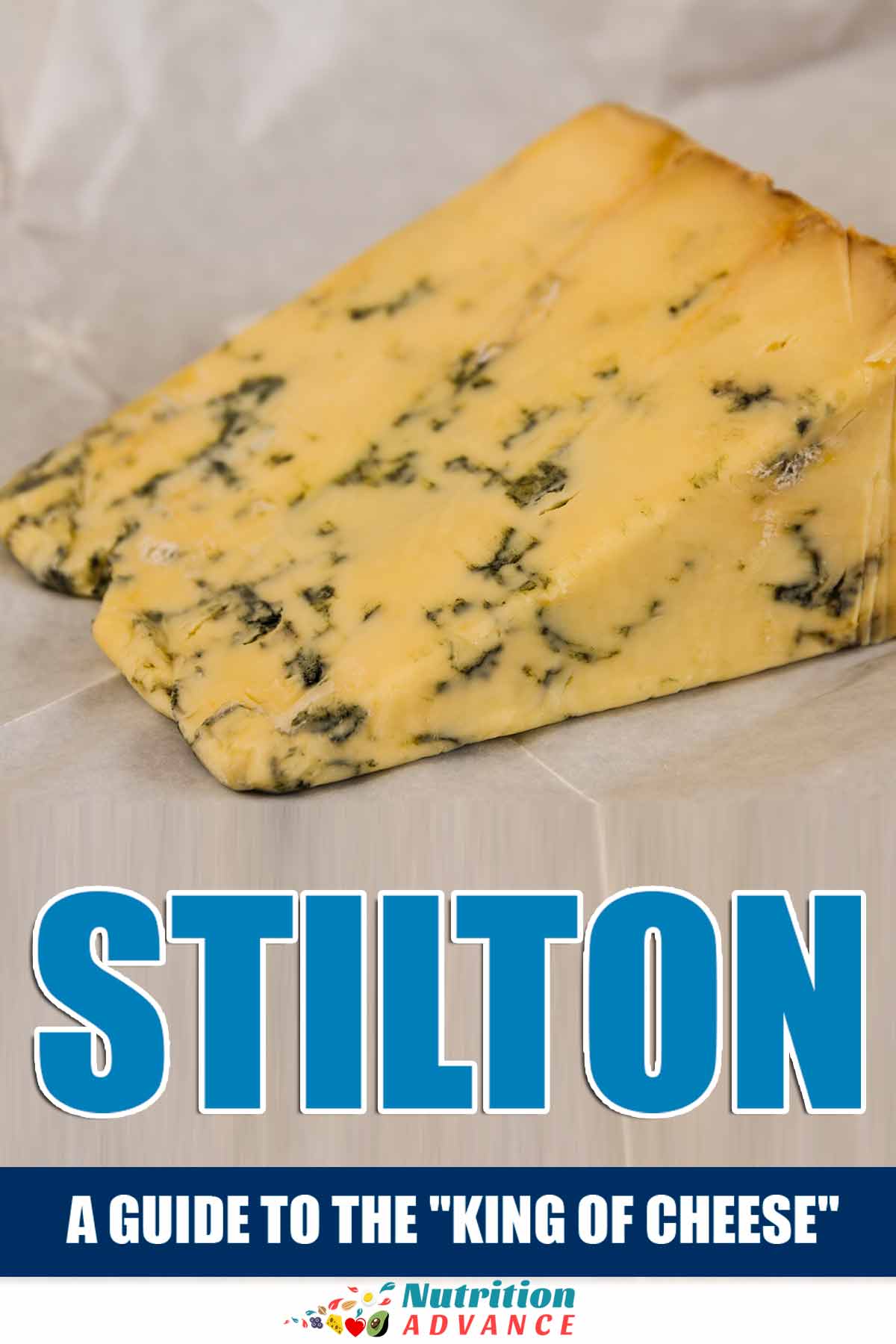 Stilton is an English cheese with over 300 years of history.

Due to its quality and production, people often refer to the cheese as “the king of cheese.”

This article provides a complete guide to Stilton, its unique characteristics, production process, and nutrition benefits.

Stilton is a traditional, semi-soft English cheese that dates back to the early 18th century or perhaps even earlier.

Behind Cheddar and Wensleydale, it is one of the oldest cheese varieties from England.

On this note, the first recorded mention of Stilton was in a letter dated from the year 1722 which contained the recipe for the cheese (1).

The origins of the cheese lie in the village of Stilton, Cambridgeshire, and Stilton’s popularity soon spread throughout the country.

In recent times, Stilton production tops more than one million wheels per year, with exports going to countries around the world (2).

There are two main varieties of Stilton, and both are made locally from fresh cow’s milk;

For this guide, we will focus on the more popular option – blue Stilton.

Stilton Has a Protected Designation of Origin (PDO)

Stilton gained a Protected Designation of Origin (PDO) in 1996, and as of 2019, there are currently only seven dairies in the world licensed to produce it.

This PDO specifies that to be called Stilton, a cheese must (3);

Key Point: Stilton is a famous cheese with over three hundred years of history, and it has a rich and creamy taste.

Here is the basic nutrition profile for Stilton for a small serving and per 100 grams (4);

Key Point: Nutritionally, Stilton is high in fat and protein, and it contains very low amounts of carbohydrate.

Research demonstrates that fermented dairy may have a positive impact on our health.

Additionally, the nutrient profile of Stilton offers some dietary benefits.

1) Stilton Is An Excellent Source of Vitamin K2 (MK4)

For example, research suggests that it can play an important role in skeletal health by increasing the deposition of calcium to our bones (5).

Additionally, the vitamin also appears to reduce the risk of vascular damage through inhibiting arterial calcification (6).

Not many foods contain vitamin K2 in large concentrations.

However, certain varieties of cheese contain high amounts of the vitamin, and this includes Stilton.

Specifically, the MK-4 variant of vitamin K2 is purported to play a role in cardiovascular health (7).

As shown in the table below, Stilton contains large amounts of MK4 – more than most other types of cheese;

For one of the best cheese sources of vitamin K2, see this guide to Gouda cheese.

2) Stilton Is High In Vitamin A

Among its many functions, vitamin A plays an essential role in vision and immune health (9).

Calcium has a significant role in the skeletal system, and a sufficient intake helps to maintain strong and healthy bones (11).

4) Stilton Cheese Is High In Protein

Stilton offers high amounts of protein, and it provides approximately 25 grams of protein per 100 grams (4).

However, Stilton isn’t the most protein-dense cheese option since it is also high in calories.

For anyone looking for the most protein-dense cheese, ricotta is an excellent choice.

First of all, there is no causal proof that fermented dairy improves long-term health.

However, some research shows an association between higher fermented dairy intake and positive health impacts.

For example, recent meta-analyses and systematic reviews have suggested that;

Once again, these are only associations, and they do not prove anything.

However, the mixed evidence from such studies generally shows a neutral or positive association rather than negative findings.

Key Point: Stilton is an excellent provider of protein, vitamin A, and calcium. Fermented dairy products like Stilton may also have additional long-term benefits, but the evidence is unclear.

How Is Blue Stilton Made?

Stilton is a unique-tasting cheese, and this may be due to its (also unique) production method.

For one thing, the cheese is entirely hand-made.

The video below explains how cheese producers make Stilton;

Here is a quick summary of this process;

Key Point: Stilton has a relatively unique production method for a cheese, which contributes to its distinctive characteristics.

How To Eat Stilton

Stilton is a popular Christmas cheese, but we can enjoy it at any time of the year.

Here are some popular ways to eat it.

For those that like wine, red wine goes very well with this combination (and Stilton in general).

Cream cheese has a relatively mild flavor, but crushing and mixing equal parts of Stilton into it can upgrade the taste.

Stilton on top of a burger offers extra flavor compared to the typical mild slices of cheese.

Many people enjoy eating Stilton on slices of fresh fruit such as apples and pears.

5) Melted Into a Soup Or Stew

Broccoli and Stilton soup is a popular (and tasty) recipe; find out how to make it here.

That said, melting Stilton into just about any soup or stew can instantly enhance the flavor.

For more Stilton recipe ideas, there are more than 50 recipes here.

Key Point: There are many delicious ways to enjoy Stilton.

Overall, Stilton cheese is reasonably nutritious, and it tastes delicious.

Although the cheese is not particularly nutrient-dense, it does offer a good source of protein, vitamin A, vitamin K2, and calcium.

Stilton has a creamy and flavorful taste, and this makes it suitable for a wide range of recipes.

It is also why people have been enjoying it for hundreds of years.

For more information on cheese, see this guide to the most popular cheese varieties.