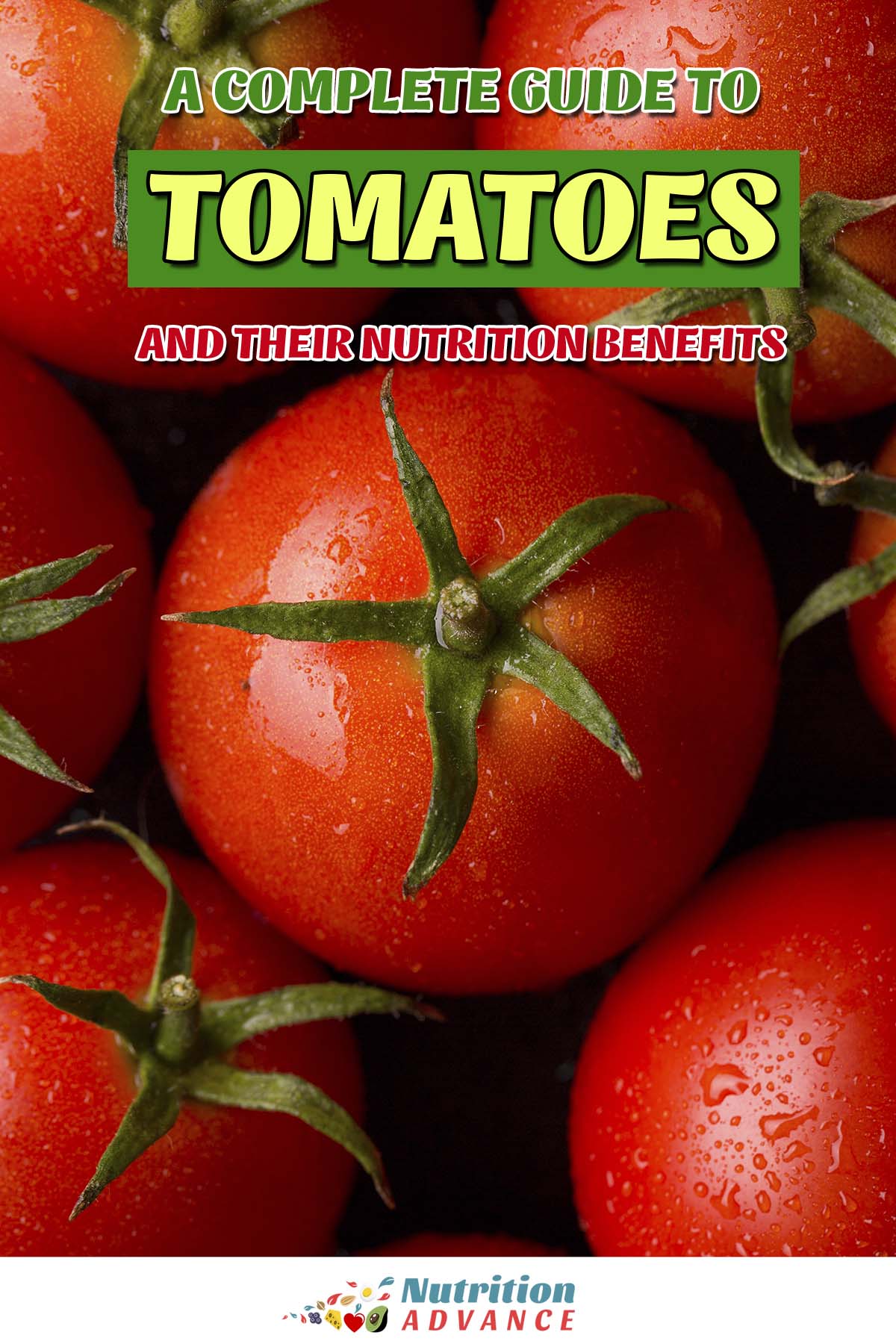 Tomatoes add a hefty dose of flavor to food, and they play a significant role in cuisines around the world.

Perhaps surprisingly, tomatoes are botanically a fruit, and they are officially a type of berry.

However, we tend to use them as a vegetable in a culinary sense.

Tomatoes are thought to have several potential benefits, mainly due to their provision of lycopene.

This article takes an in-depth look at their nutrition profile and potential benefits. 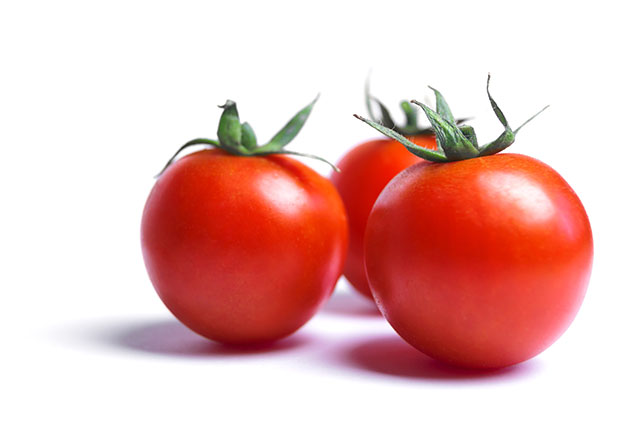 The following section shows the nutrition facts for tomatoes per 100 grams. The source of the data is the USDA’s FoodData Central (1).

(For reference purposes, a typical tomato weighs approximately 91 grams, 123 grams, or 182 grams depending on whether it is small, medium, or large).

As shown in the nutritional values, tomatoes contain 3.9 grams of carbohydrate, and this is mainly from fiber and the sugars fructose and glucose.

They also contain minimal amounts of fat and protein.

Tomatoes offer a wide range of vitamins, but most of them are only in small to moderate concentrations (1):

As we can see, tomatoes are a good source of vitamin C.

Despite containing almost every mineral, the amount of each mineral that tomatoes provide is relatively small (1):

Key Point: Tomatoes are fairly nutrient-dense, and they offer a reasonable amount of vitamin C.

There has been a lot of scientific interest in lycopene.

Lycopene is a kind of carotenoid that has presumed antioxidant effects within the body, and it is responsible for the deep red color of tomatoes (2).

What Are the Benefits of Lycopene?

Here are some recent findings from published research on lycopene:

Key Point: Systematic reviews and randomized controlled trials show that lycopene, a carotenoid in tomatoes, may have health-protective effects.

Lycopene Content and Bioavailability In Tomatoes and Tomato Products

Lycopene is present in all tomato products. However, fresh and processed tomatoes have a few differences.

While processing can sometimes reduce the nutritional content of food, research suggests it is the other way round for lycopene.

In a study, tomato paste offered much higher lycopene bioavailability than fresh tomatoes containing an equivalent amount of the compound (9).

On this note, here is a guide to how raw and cooked vegetables can differ.

It is also worth noting that tomato paste offers a higher concentration of lycopene than fresh tomatoes. Since most research studies use between 7.5 mg and 15 mg doses of lycopene, this may be something to bear in mind for anyone eating tomatoes for their lycopene content.

According to the USDA FoodData Central database, fresh tomatoes provide approximately 2573 mcg (2.5 mg) of lycopene per 100 grams. Therefore, an equivalent dose to research studies would be around 300 to 600 grams (1).

Find out more about the benefits of tomato paste here.

Although cooking tomatoes can increase the amount of bioavailable lycopene, the compound can break down when it reaches certain temperatures.

On this note, a study investigating the effects of cooking conditions on lycopene content found that the carotenoid degrades faster at temperatures above 100°C (212°F) (12).

Using data from this study, the table below shows the degradation of lycopene in tomatoes at different temperatures.

As shown in the table, lower heat levels appear to preserve higher concentrations of lycopene.

According to the study, baking and microwave cooking preserved much higher amounts of lycopene than frying.

Lycopene is a fat-soluble nutrient.

In other words, it is optimal to consume a source of fat alongside tomatoes for the highest absorption of lycopene. This fat content could be some meat or fish that is part of the meal, plant-based fats such as avocado, or added fats such as butter or olive oil.

For instance, in one study, consumption of a tomato-containing salad without fat showed no measurable increase of lycopene in the body. On the other hand, the same salad consumed with avocado led to a 4.4-fold increase in lycopene levels (13).

Lastly, it is worth noting that other red fruits and vegetables, such as bell peppers and specific varieties of carrots, are also good sources of lycopene.

Key Point: Tomatoes are an excellent source of lycopene, but tomato paste is the easiest way to consume higher amounts of the compound.

Tomatoes Are Easy To Use

Another positive point about tomatoes is their versatility and just how easy to use they are.

We can easily see this by looking at how prevalent tomatoes are in recipes around the world.

Throwing some tomatoes into a salad or stir-fry or adding some tomato paste to a stew are all simple ways to improve the nutrient value (and taste) of food.

Key Point: Tomatoes are easy to use and they work well in a wide variety of recipes.

On the whole, tomatoes are fairly nutritious, and they offer more positives than negatives.

However, here are some potential drawbacks to be aware of.

There are rare reports of tomato allergy, and this reaction appears to result from several allergenic proteins found within tomatoes (14).

Also, cross-reactivity exists between tomato and pollen allergies. Research has established this is due to the similarity between the structures of the Sola l 4 protein in tomatoes and an allergen in birch pollen called Bet v 1 (15).

Based on a small trial, 9% of 32 patients with pollen allergy had cross-reactions with tomatoes (16).

Little is known about the true prevalence of tomato allergy, but in patients with existing food allergies living in the Mediterranean, 6.5% of the population had sensitivities to tomato (17).

The majority of tomato products are reasonably nutritious.

That said, it is worth noting that some types of tomato-based sauces and marinades can contain substantial amounts of added sugar and oils.

For anyone looking for tomato products without the extra sugar and oils (and calories), make sure to check the ingredients label.

Tomatoes are not just one thing, and like other fruit, there are dozens of varieties of tomatoes throughout the world.

If you take a visit to a farmers’ market, you can probably find some unique breed that you’ve not yet seen.

Here are some of the most common varieties of tomatoes around the world:

Beefsteak tomatoes are the biggest commonly available tomato, and they have significant commercial value. For instance, fast food chains frequently use these tomatoes in their products.

These tomatoes are quite sweet, and they can grow bigger to several pounds (1 kg +) in weight.

In terms of size and appearance, Campari tomatoes are somewhere in between cherry tomatoes and plum tomatoes.

Campari tomatoes are widely thought to be one of the sweetest—and most flavorful—commercial varieties of tomato (18).

Kumatoes are a similar size to regular red tomatoes.

However, they have an off-green to reddish-brown color, and they contain higher amounts of fructose than regular tomatoes (19).

As a result, the Kumato has a slightly sweeter taste than the standard red tomato.

Cherry tomatoes are small and round, and they resemble a grape in terms of size.

Salads often make use of cherry tomatoes as they provide a crunchier, juicier taste than regular tomatoes.

Although they may look like a new tomato variety, cherry tomatoes have been around for centuries.

Perhaps surprisingly, they were the first tomato grown in Europe.

Grape tomatoes are similar in size to cherry tomatoes. However, they have more of an oblong shape rather than being round.

Roma tomatoes are one of the most popular commercial tomato varieties, and they share a similar appearance to grape tomatoes.

This variety is also known as ‘Italian tomatoes,’ but they grow across continents.

Commercial production takes place in Australia, the United Kingdom, and the United States (20).

Roma tomatoes have an oblong shape and share a similar appearance to grape tomatoes.

Key Point: There are many different kinds of tomato, each with a slightly different appearance and taste.

Overall, tomatoes have a lot to offer, and they come in all different shapes and sizes.

Nutritionally, they are among the best dietary sources of lycopene, and they provide a respectable amount of vitamin C.

There is also an excellent reason why tomatoes are so popular around the world: they enhance the taste of the many different dishes we use them in.

56 Different Types of Vegetables (and Their Nutrition Profiles)