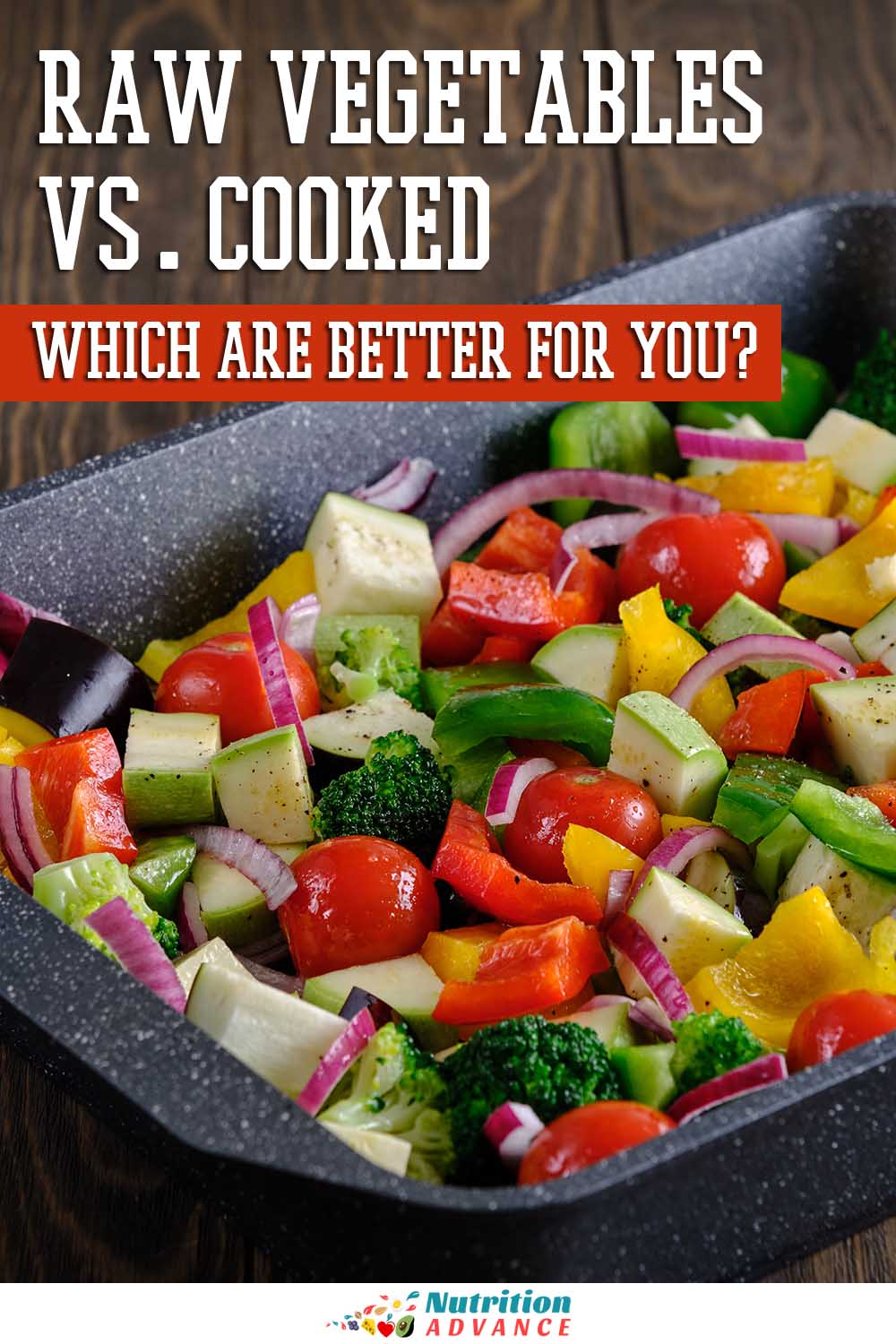 Vegetable consumption is consistently associated with benefits, and we always hear about how we should include more vegetables in our diet.

However, should we be consuming raw or cooked vegetables?

As is so often the case with nutritional topics, the truth lies somewhere in the middle. Not all vegetables are the same, and each vegetable has different properties and a unique blend of nutrients, which the heating process affects to varying degrees.

Let’s examine how raw and cooked vegetables compare and what research findings in the area have shown. 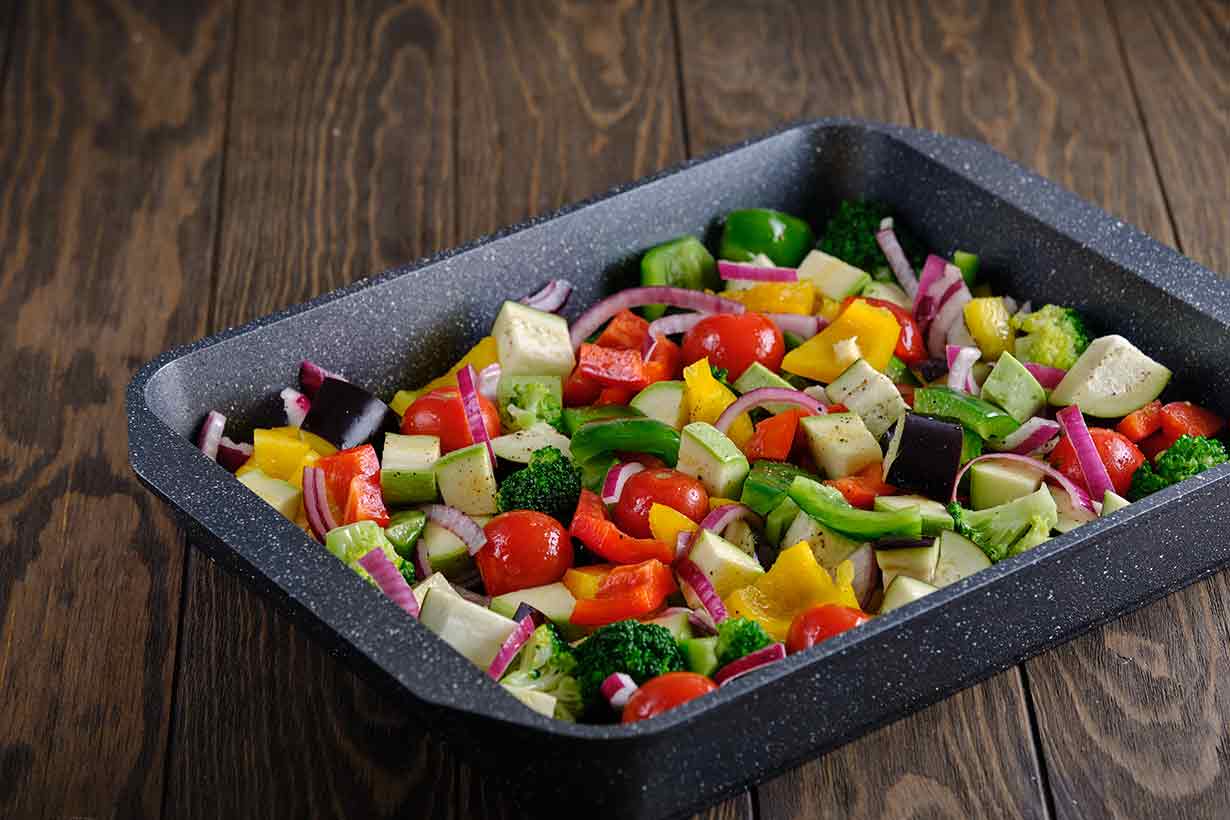 Cooking Can Degrade the Water-soluble Vitamin Content of Vegetables

The concentration of some vitamins, such as vitamin C and folate, can decrease during the cooking process (1, 2, 3).

This loss happens because they are water-soluble vitamins, meaning that they are stored in the water that vegetables lose due to the heating process as they cook.

Some cooking methods are worse than others for the loss of water-soluble vitamins. For example, boiling will result in the vitamins leaching into the water and being lost.

In this regard, research consistently shows that boiling results in much higher losses of vitamin C than other cooking methods due to the increased water contact. In contrast, blanching, steaming, and microwaving lead to higher vitamin C retention after cooking (2, 4).

Some sources of vitamin C (such as potatoes) need to be cooked to be appealing. However, if preserving vitamin C content is the aim, it may be preferable to eat vegetables rich in the vitamin, like bell peppers, raw.

This same premise holds for other water-soluble vitamins like folate, which can also significantly degrade during cooking. For the highest folate retention, it is better to eat folate-rich foods (such as spinach) raw (1).

Also, when cooking vegetables like potatoes, leaving their skin on helps retain more of their vitamin C content.

A study in this area showed that cooking peeled potatoes resulted in a 40-45% loss of vitamin C, whereas unpeeled potatoes only lost approximately 7% (5).

Key Point: Cooking can lower the water-soluble vitamin content of vegetables. If this is a concern, raw vegetables will offer higher concentrations of these vitamins.

Some Compounds Can Be Easier To Absorb In Cooked Vegetables

Cooked vegetables can also have benefits over raw vegetables. One such benefit is the increased bioavailability and absorption of certain compounds.

We can see one of the best examples of this with lycopene, a carotenoid with antioxidant properties that we can find in foods like tomatoes and red bell peppers (6).

While raw tomatoes do provide a moderate source of lycopene, it is partly bound by the fibers and plant walls of the tomato, which reduces its bioavailability.

Other carotenoids, such as beta-carotene, are also significantly more bioavailable after cooking the vegetables that contain them.

Key Point: Cooking and the heat processes involved can make some compounds in vegetables more bioavailable. Two good examples of this are beta-carotene and lycopene.

Compared to water-soluble vitamins, the mineral content of vegetables generally seems to be less affected by heat.

That being said, one study found that cooking vegetables lowered the total mineral content to 60-70% of that found in raw vegetables (12).

There is relatively little research in this area, so it isn’t easy to ascertain exactly how cooking different vegetables may impact the absolute mineral content.

However, while cooking vegetables could slightly lower their mineral content, it may make those minerals more bioavailable.

For example, certain compounds found within vegetables can bind to minerals, thus reducing the mineral’s bioavailability. One such example is oxalic acid, also known as oxalate, which can bind to calcium and magnesium (13, 14).

Boiling appears to be the best cooking method for reducing oxalate levels. According to research, across nine different vegetables, boiling reduced soluble oxalate content by an average of 30-87% compared to 5-53% for steaming (15).

As all this data shows, the nutritional content of raw versus cooked vegetables is a confusing topic, and the cooking process (and specific method) can have varying benefits and drawbacks.

Key Point: Cooked vegetables may contain slightly lower mineral levels than raw, but particular minerals, such as calcium and magnesium, may be more bioavailable.

Chives, garlic, leeks, onions, shallots, and spring/green onions are all vegetables that belong to the Allium genus of plants (16).

These vegetables contain various organosulfur compounds such as allicin and ajoene, which are sometimes known as thiosulfinates. These sulfur compounds play a role in the spicy taste and strong odor of vegetables in the allium family, and they may potentially have some health benefits (17).

For example, various cell (test tube) and mechanistic studies have suggested that these compounds may have anti-cancer properties (18, 19, 20).

It is important to recognize that there is a lack of human outcome studies in this area. Thus, the findings need to be supported by high-quality evidence from human trials and cohorts before making strong claims.

There is a notable difference in the level of these sulfur compounds within raw and cooked vegetables. Numerous studies have demonstrated that cooking garlic and onions results in the partial loss of thiosulfinates (21, 22, 23).

Thus, it may be better to eat them raw for the full (potential) health benefits of garlic and onions. Studies also note that the partial loss of these compounds can be compensated by simply increasing the amount consumed (21).

We can see the same occurrence happen with the sulfur-containing compounds (glucosinolates) found within cruciferous vegetables like broccoli and kale. Cooking these vegetables also results in the loss of sulfur compounds, most significantly so when boiling them (24, 25).

One often neglected point is that raw vegetables are one of the most common causes of foodborne illness.

We tend to associate foodborne illnesses with raw animal-based foods, but raw vegetables are also a common cause of E. coli, norovirus, and salmonella outbreaks (26, 27).

While the risk of food poisoning is relatively rare from eating raw vegetables, cooking them reduces this risk significantly:

Key Point: The risk of contracting a foodborne illness form vegetables is low, but raw vegetables can harbor bacteria that can cause illness.

Taste Is An Important Factor

Thus far, we have looked at how the preparation and cooking methods of vegetables can affect their nutrient provision.

However, we should not forget that taste is an important factor; most people would agree that cooked vegetables taste much better than raw vegetables.

Even in the contexts where raw vegetables are nutritionally superior, this doesn’t mean much if people won’t eat them because they don’t enjoy the taste.

Oven-roasted and stir-fried vegetables result in minimal nutrient losses compared to methods such as boiling, and they significantly enhance the taste of vegetables.

With this in mind, if cooking encourages greater vegetable consumption, then cooked vegetables have an advantage over raw vegetables, irrespective of anything else.

Taste is so often a consideration we forget when talking about the benefits of particular foods and diets. In short, enjoyment of the food we eat is vital for sustaining healthy eating behaviors.

Key Point: Cooked vegetables taste better than raw vegetables, and people are more likely to consume vegetables if they enjoy the taste.

The Effect of Cooking Vegetables On Their Polyphenol Content

Polyphenols are bioactive compounds found within foods that may confer benefits for human health (30, 31).

However, the impact of the cooking process on polyphenol content depends heavily on the food, specific polyphenol, cooking method, and more.

In a study on leafy green vegetables, boiling the leaves actually increased their available polyphenol content, but higher-heat processes such as frying reduced polyphenol levels (32).

Just for a quick recap, here is a look at some reasons to consider eating more raw vegetables:

Summarizing the potential benefits of cooking vegetables, here are some of the key points:

As evidenced in this article, there are both benefits and downsides to raw vegetables and cooked vegetables.

All in all, the best bet may be to consume a range of different vegetables and include both raw and cooked vegetables in the diet. However, there is no real need to choose raw or cooked vegetables over the other, and both can be beneficial.

As taste is a big factor for many people, what suits the individual and personal preferences should be considered.