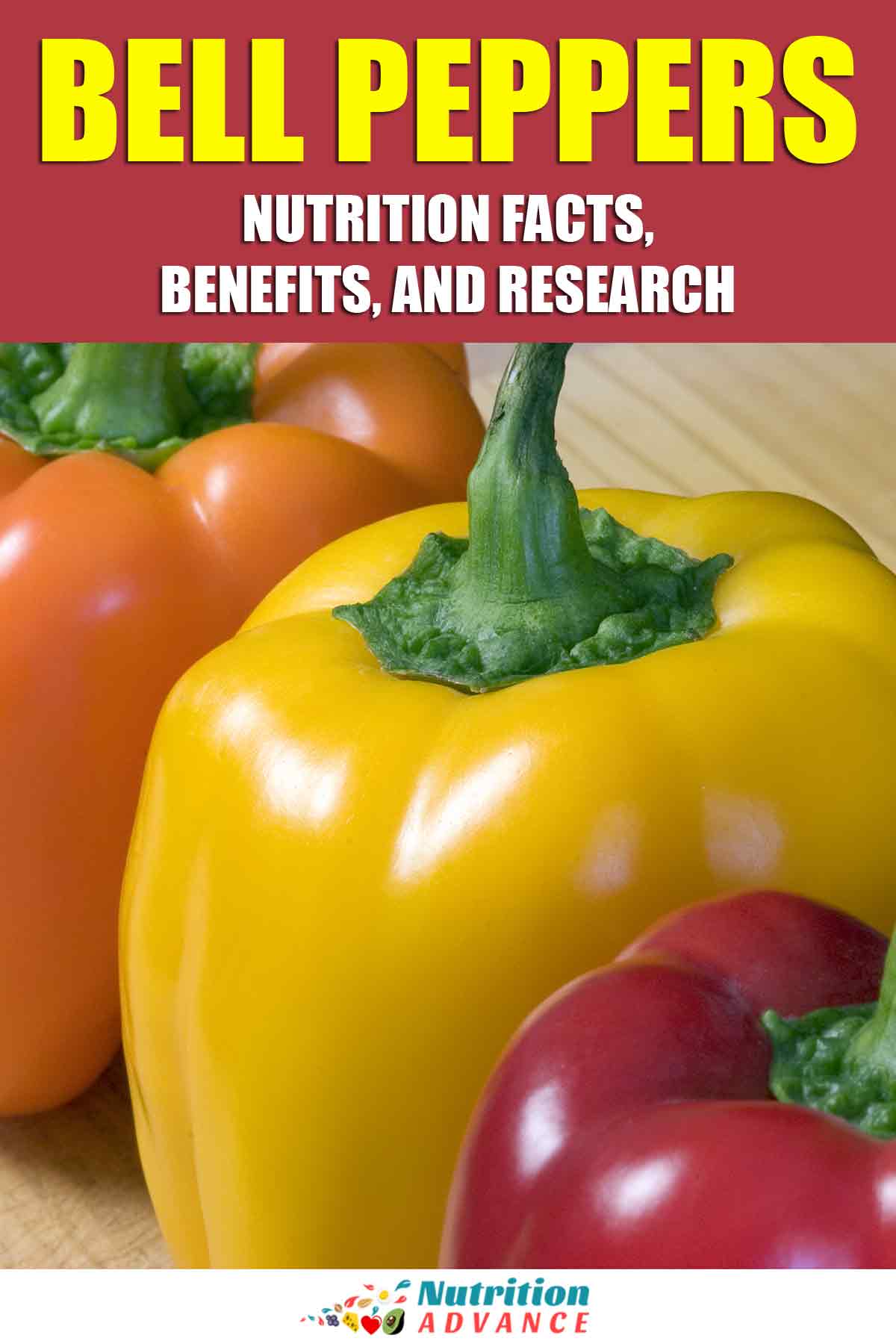 Bell peppers are delicious, crunchy, and full of flavor.

While we think of them as vegetables, bell peppers are technically a fruit that belongs to the Capsicum annuum species of plants (1).

Nutritionally, bell peppers provide a substantial vitamin C source, a wide range of nutrients, and they may have some interesting benefits.

This article takes an in-depth look at bell peppers and their nutritional values, potential health benefits, and how to use them.

What Are Bell Peppers?

Bell peppers originated in Hungary, but their story started in Central and South America.

In 1493, Christopher Columbus and his team of explorers returned from the Americas with the (spicy) pepper. It quickly became popular in Spain and soon spread throughout Europe and the rest of the world (2).

However, the (mild) bell pepper wasn’t developed until the 1920s in Hungary. The bell pepper had a recessive gene that halted the plant’s capsaicin production, the chemical compound responsible for the hot spicy taste in chili peppers (3).

For this reason, despite being a “pepper,” bell peppers are not spicy like the rest of the Capsicum family. To help make this point clear, people sometimes refer to them as ‘sweet peppers.’

Depending on their color, bell peppers can taste anything from slightly bitter to sweet and juicy.

As a type of pepper, bell peppers are also part of the wider nightshade family of plants, which includes eggplants, potatoes, and tomatoes (4).

Is the Bell Pepper a Fruit or Vegetable?

Like other foods in the nightshade family, such as tomatoes and cucumbers, confusion often exists as to whether bell peppers are a type of fruit or vegetable.

The botanically correct answer is that bell peppers are a fruit since they contain seeds and develop from the ovaries of a plant (5).

However, while technically a fruit, we tend to think of bell peppers as vegetables for culinary purposes.

In short: bell peppers are a fruit that we typically use as a vegetable.

Key Point: Bell peppers are a non-spicy pepper that first originated in the 1920s.

Below is the full nutrition profile for one medium red bell pepper; all nutritional values are courtesy of the USDA FoodData Central Database (6).

The daily values have been calculated by contrasting the nutritional data with the FDA’s published daily values.

Bell peppers are composed of approximately (6):

This makes bell peppers one of the most hydrating food options.

Bell peppers are a rich source of several phytonutrients, and these include:

Aside from converting to vitamin A inside the body, carotenoids are thought to offer further potential health benefits.

Lycopene is an interesting carotenoid found in a wide variety of red-colored vegetables and fruits, including tomatoes, guavas, and watermelons (11).

It is also interesting that these studies used realistic dietary amounts of lycopene (ranging from 5 mg to 30 mg per day). On this note, a study that investigated the bioactive compounds in bell peppers showed that they could contain anywhere from 1.5 to 8.6 mg of lycopene per 100 grams, depending on the specific variety (8).

Oxidative stress is a state caused by an imbalance (and an over-abundance) of free radicals to antioxidants within the human body. High levels of oxidative stress over prolonged periods are a risk factor for several chronic diseases (13).

For more foods high in lycopene, tomatoes offer more than any other food.

Key Point: Bell peppers are one of the richest dietary sources of lycopene, a carotenoid with potential health benefits.

When we cook fat sources at high temperatures, they can oxidize (or break down), particularly when cooking for prolonged periods. Certain types of fatty acids, particularly polyunsaturated omega-3 and omega-6, are also more prone to oxidation (14).

There is little evidence from human trials on the exact implications of consuming oxidized fats, but mechanistic and cell studies theoretically link them with adverse health effects (15, 16, 17).

Due to the range of carotenoids and polyphenols in bell peppers, they may have an antioxidant effect that protects fatty acids and cholesterol from oxidizing during cooking.

In one study, the researchers tested slurry extracts from four different bell peppers (orange, yellow, orange, and red) by heating them alongside cholesterol and docosahexaenoic acid (DHA – an omega-3) (18).

Notably, each of the four pepper extracts “significantly” reduced oxidized cholesterol and fat levels compared to using no bell pepper extract. The effect seen was highest in red bell pepper, which contains higher amounts of carotenoids than other color peppers (19).

This suggests that using bell peppers (or other foods high in phytonutrients) can help stop fatty acids from oxidizing during cooking. Previous studies support this assertion, too, showing that cooking meat alongside polyphenol-rich red wine or green tea marinades protects the fat from oxidizing (20, 21, 22).

Key Point: Bell peppers are one of the richest dietary sources of lycopene, a carotenoid with potential health benefits.

High In Vitamin C, Which Contributes To a Healthy Immune System

Vitamin C plays a crucial role in the human immune system, and bell peppers are packed with this essential nutrient.

As shown in the nutrition facts section, red bell peppers contain 152 mg of vitamin C, equivalent to 158% of the recommended daily value (6).

The amount of vitamin C in one red bell pepper is more than double the amount in a medium orange and more than eating a whole cup of lemon (6, 23, 24).

Key Point: Bell peppers are provide a significant dose of vitamin C. They are one of the most vitamin C-rich foods available.

What Is the Difference Between Green, Yellow, Orange, and Red Bell Peppers?

Firstly, all bell peppers have a somewhat similar nutrient profile regardless of their color.

However, the main point that some people don’t realize is that every color of bell pepper comes from the same plant. The color just represents different stages of ripeness.

For example, a green bell pepper is simply one that has been picked from the plant before reaching maturity. In contrast, red bell pepper is at the final stage of maturity.

Since red bell peppers have the longest time to develop, they tend to have a better nutrient profile and sweetness level.

Studies that have looked at the nutritional differences show that vitamin C slightly increases depending on the maturity stage from green to yellow and orange to red (29).

Key Point: Different colored bell peppers are all from the same plant, but they become slightly sweeter and more nutritious as they ripen. Red is the final stage of maturity.

How To Use Bell Peppers

The good news is that bell peppers taste delicious however you eat them, and they are quite versatile too.

These crunchy peppers can be eaten raw, where their sweetness and crunchy texture dominates. But they also work well in various dishes and recipes.

Here are a few of the best ways to eat bell peppers:

Key Point: Bell peppers are delicious, and they taste good however you use them.

Bell peppers come in all different colors and sizes, and they are all nutrient-rich options.

For those looking to maximize their nutritional benefits, the red varieties contain the most nutrients.

Bell peppers provide substantial amounts of vitamin C, and they may offer further benefits through its provision of carotenoids and polyphenols.

As a bonus, bell peppers offer all these nutrients for very few calories, and they taste delicious too.