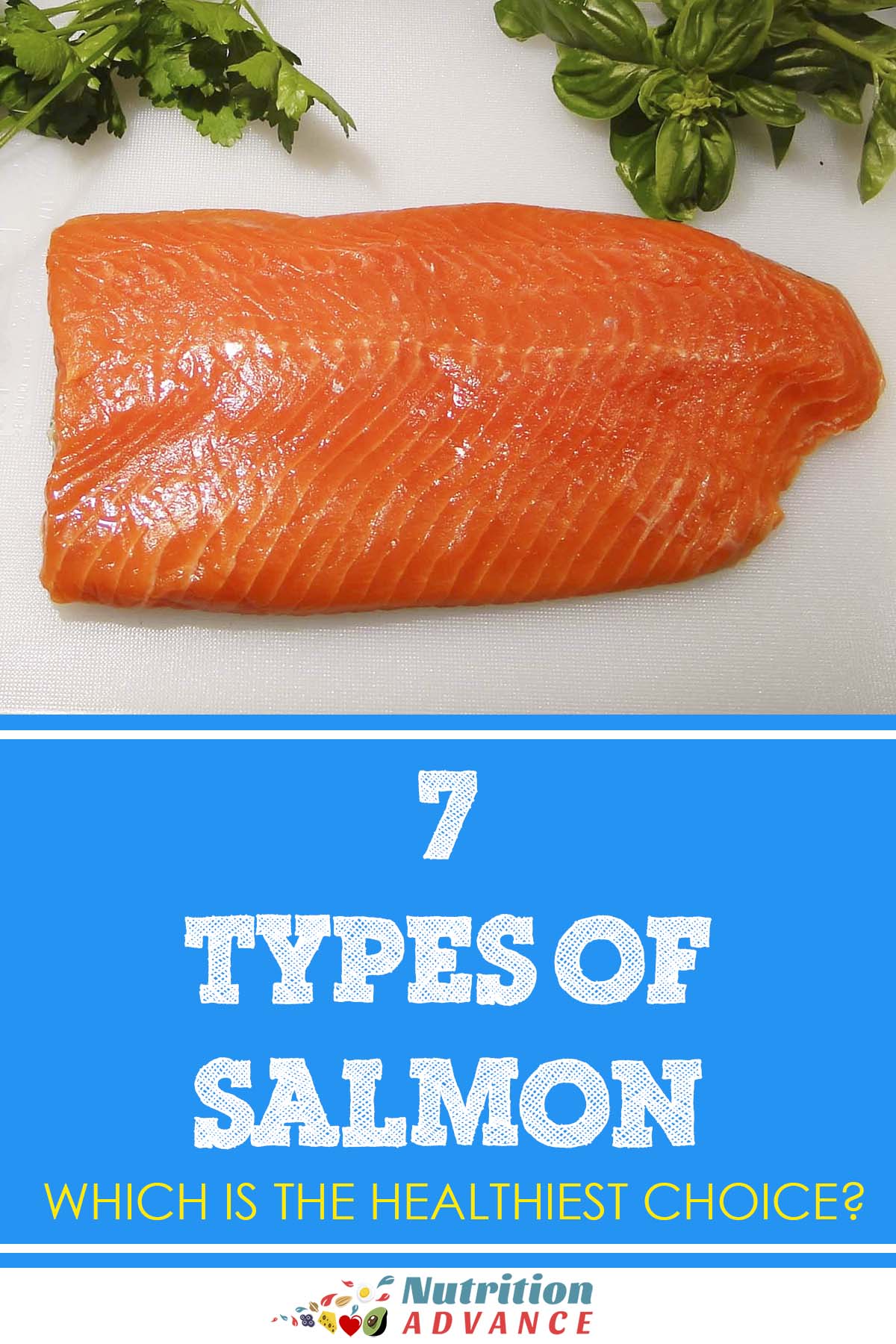 Salmon is one of the healthiest foods from the sea, and it is full of omega-3 fatty acids and other beneficial nutrients.

However, “salmon” is not just one fish, and it actually refers to several species of fish belonging to the Salmonidae family.

Generally speaking, all of these fish are healthy choices, but they do differ nutritionally.

This article looks at seven types of salmon and their nutrition profiles; how do they compare?

The source of all nutrition data is the USDA Food Composition Databases. 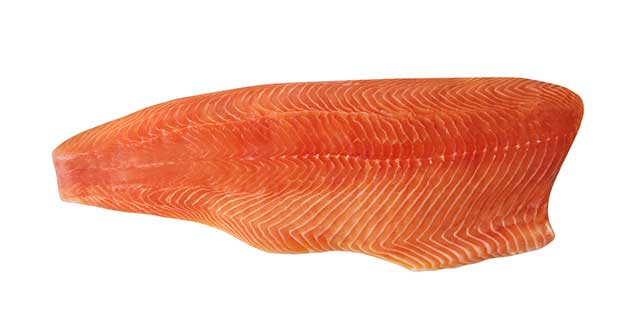 The Atlantic salmon is the most popular type of salmon for commercial food production, and it is available in both farmed and wild form.

Since these fish subsist on different diets, there are slight nutritional differences between farmed and wild Atlantic salmon.

On the other hand, farmed fish consume fish feed pellets, the contents of which can vary from country to country.

The table below shows the nutrient profile per 100 grams for both wild and farmed varieties of the fish (1, 2).

A Note on Vitamin D

All salmon are a good source of vitamin D, and wild fish offer the most significant amount.

According to research, farmed salmon typically offers only 25% of the vitamin D that wild salmon provides (3).

However, the USDA Food and Nutrient Database does not publish the vitamin D concentrations for most fish. These figures can vary tremendously based on sunlight exposure and other factors.

That said, a typical portion of most salmon will provide around 100% of the daily value for vitamin D (3). 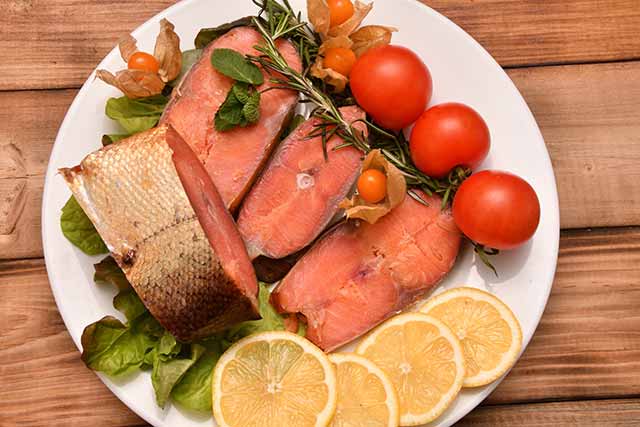 You may also know Chinook salmon by the name of ‘king salmon,’ and this fish resides in the waters of the North Pacific Ocean.

Chinook salmon is historically a wild fish, although global aquaculture production started in the 1990s, predominantly in Chile and New Zealand (5).

Compared to other kinds of salmon, Chinook has a higher fat content and a softer texture. 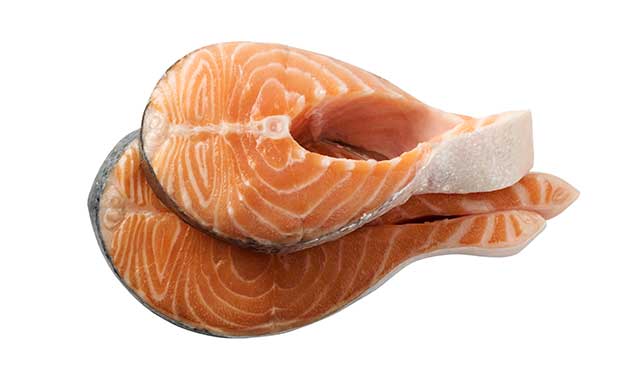 Chum salmon goes by several alternate names such as ‘dog salmon’, ‘keta’, and ‘silverbrite,’ and it is native to the Pacific ocean.

As a result, most of the commercially available chum salmon for food comes from Alaska.

Chum has a lighter texture and a milder flavor than other types of salmon.

The fish is also the second largest among the salmon family after Chinook, and it can weigh up to 35 lbs (16 kg) (7).

Marine biologists consider chum salmon to be a sustainable and responsibly harvested fish.

The nutritional values for Chum per 100 grams are shown below. As shown, it is much lower in fat than other species of salmon (8). 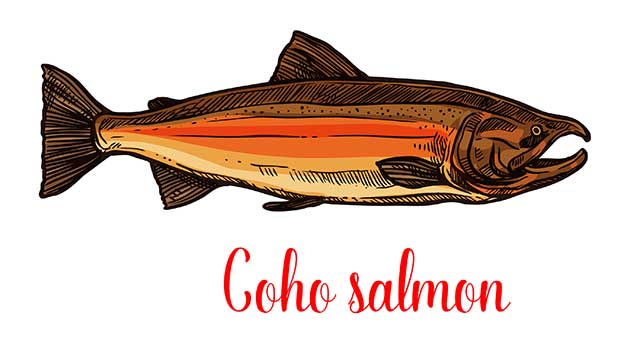 Coho is one of the most commercially available salmon species, and it is available in food markets around the world.

Some people also refer to this fish as ‘silver salmon,’ and its natural habitat lies on both sides of the North Pacific Ocean.

While coho salmon from around Alaska is wild, an aquaculture production trade has increased over the past few decades.

Coho is a medium-fatty salmon, and per 100 grams it offers the following nutrition profile (10, 11); 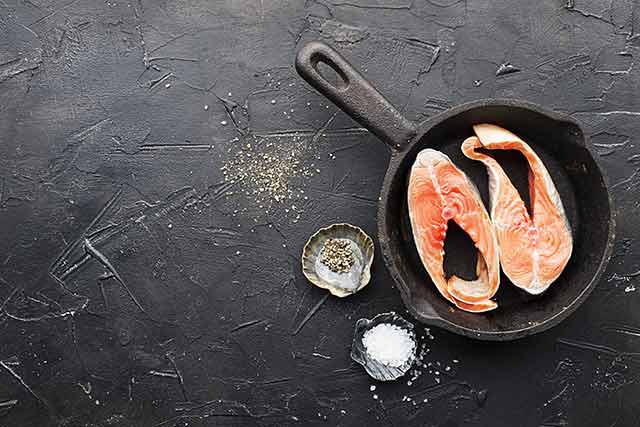 Pink salmon, sometimes referred to as ‘humpback,’ is the smallest type of Pacific salmon, and it mainly lives in the North Pacific, particularly around the Alaska area.

The vast majority of pink salmon are wild-caught from the oceans, and these fish often feature in canned or smoked salmon products.

Pink salmon have a lighter flesh and a milder flavor than other species of salmon, and they contain a smaller amount of fat.

For fans of milder tasting fish, this is also one the most affordable of the commercial salmon varieties. 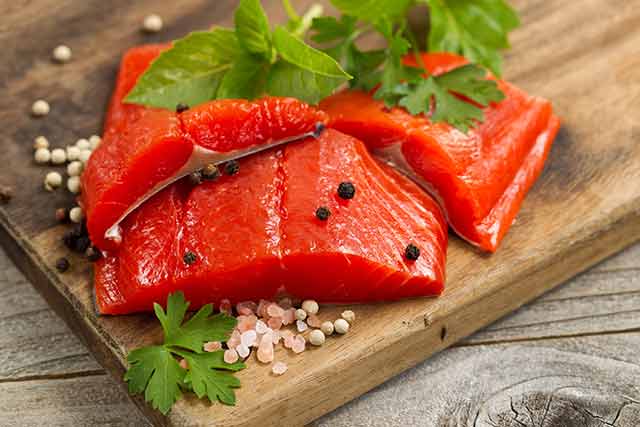 Also known as ‘red salmon’ or ‘blueback,’ sockeye salmon is a species of fish that lives in the North Pacific Ocean and surrounding river habitats.

These contrasting names come from the fact that sockeye salmon are actually blue, but they have red flesh.

The bright red hue of sockeye fillets is due to the high carotenoid content of sockeye salmon’s diet.

On this note, the diet predominantly revolves around zooplankton; nutritious small organisms that live near the surface of marine environments. This zooplankton provides significant amounts of carotenoids and B12.

With a medium fat content, sockeye salmon is considered to be one of the best-tasting (and healthiest) types of salmon.

For a full guide to the health benefits of sockeye salmon, see this article. 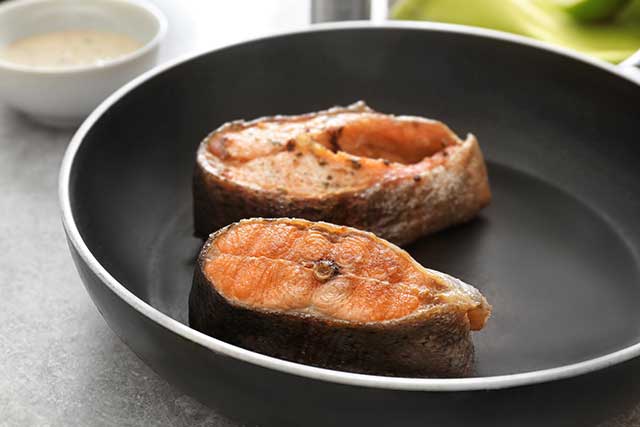 Steelhead creates confusion over whether it’s a salmon or a trout, and it even has the nickname of ‘salmon trout.’

While biologically considered to be a species of trout, the steelhead is a member of the salmon family and acts like a salmon in its migratory patterns (14).

Steelhead may also be referred to as ‘rainbow trout,’ but there are some slight differences between these fish.

On the other hand, steelhead fish migrate to and from the ocean.

Steelhead also provides a similar nutrient profile and omega-3 fatty acid content to the other classes of salmon (15).

As shown in this article, there are several different varieties of salmon, each with their own unique nutrition profile.

That said, all varieties of salmon (whether wild or farmed) offer a range of beneficial nutrients and—most importantly—bioavailable omega-3.

Therefore, you can’t go wrong with whatever option you choose; salmon is one of the healthiest foods we can eat.

If you want to learn how to cook salmon for perfect fillets every time, see this guide here.

For more on healthy fish, see this guide to the best fish choices for omega-3.