We always hear that we should get more omega-3 in our diets.

There is a good reason for this too; the modern diet is extremely high in omega-6, yet very low in anti-inflammatory omega-3.

As the human body cannot make fatty acids such as DHA and EPA, this makes them an essential nutrient.

The best place to get them is seafood, and there are a wealth of oily fish options available to us.

However, many fish have high levels of mercury due to industrial pollution.

For instance, tuna is one of the best sources of omega-3, but it’s very high in mercury, which can cause problems if it builds up in the body.

This article examines nine fatty fish which are high in omega-3 but also low in mercury.

Salmon belongs to a family of fish named Salmonidae, which also includes species such as trout.

Salmon is one of the most famous types of fatty fish, and thankfully it’s low in mercury too.

It’s also one of the very best sources of omega-3 out of all foods.

Salmon tastes great no matter how you cook it; it’s particularly famous as sushi or sashimi and smoked salmon is delicious too.

It’s also much more than just a fatty fish; it has some impressive additional health benefits too.

Interestingly, salmon isn’t just one fish, and there are numerous different types of salmon.

Key Point: Salmon is one of the best-tasting fish, and it’s high in omega-3 fatty acids and low in mercury.

Coming second on the fatty fish list is mackerel.

However, it’s important to realize that there are several different species of this fish, and three of the most common are;

Mackerel has the additional benefit of being very affordable compared to fish such as salmon.

For more information, see this complete guide to mackerel.

Key Point: Atlantic Mackerel is one of the best oily fish for health, and it’s an affordable source of omega-3s. 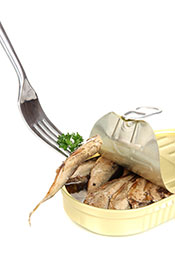 Sardines belong to the family of fish known as Clupeidae, and these species are small oily fish in the herring family.

You may also hear sardines referred to as “pilchard,” but these two names are interchangeable – it’s the same fish.

Due to their size, sardines naturally have very low mercury levels, and they’re among the cleanest of seafood options.

Due to the fact we eat the whole fish, sardines are a nutritional powerhouse. For instance, they’re a unique source of dietary calcium since we eat the bones (6).

Sardines are available either in fresh or canned form.

While fresh food is always preferable, sardines in a can are a healthy choice too.

Wild Planet is a respectable brand that sells some of the best canned sardines – available here.

Key Point: Sardines are one of the highest omega-3 fish and one of the very lowest in mercury.

The herring belongs to the same family of fish as sardines, and it is most common in the Atlantic and North Pacific ocean.

It has a lot of history as an edible fish, and traditionally it has been consumed either fresh, smoked, or pickled.

As the table shows, herring are full of omega-3 fatty acids and contain approximately 2418 mg per 100g (7).

Despite being slightly higher in mercury than the previous fish, the levels are still relatively compared to most species with 0.078ppm of mercury (4).

Belonging to the same family of Salmonidae as salmon, there are several commonalities between the trout and salmon.

They both have an orange-pink hue due to the presence of astaxanthin, an aquatic carotenoid antioxidant with numerous health benefits (8, 9).

Sharing a similar texture and appearance, the taste of the two fatty fish is also relatively similar.

But how does trout fare versus salmon regarding omega-3 and mercury?

Although the profile isn’t quite as good as salmon, it’s still decent, and trout usually comes at a more economical price too.

For more information on trout, see this article on rainbow trout’s health benefits.

Key Point: Trout are a sibling of salmon and they provide similar health benefits and a great taste.

This one is cheating slightly since kippers are just an alternate way of preparing herring.

However, not many people realize that kippers and herring are the same fish.

Kippers are simply smoked herring, and they were especially popular in the UK as a traditional breakfast food.

That’s right – there was a time when breakfast still meant a nutritious home-cooked meal rather than sugary cereal.

As a result of the smoking, kippers have a slightly different omega-3 content to fresh kippers.

If you’ve never tried kippers, they taste great with a bit of melted butter on top.

As a traditional breakfast, people would commonly eat them alongside fried eggs, and that’s a healthy meal I’d recommend to anyone.

Similar to sardines, kippers are also available to buy in canned form.

See here for a full guide to kippers.

Key Point: Once a traditional British breakfast, kippers aren’t as popular as in the past. However, they’re worth looking out for due to their delicious flavor and an abundance of omega-3.

Anchovies are another small oily fish—even smaller than sardines—prevalent in the Pacific ocean.

Generally speaking, we eat them in whole form – skin, organs, and even eyes!

In fact, they are so small that they appear in a wide variety of dishes – you can even find them on pizza.

Here are their stats;

The table shows they have a minimal mercury content alongside a substantial amount of omega-3 fatty acids.

Furthermore, since they typically contain around 0.012ppm mercury, they have one of the very lowest mercury concentrations among fish (4, 12).

Key Point: Small in size but full of nutrients, anchovies are one of the best fatty fish for our diet.

The catfish takes its name from the whisker-like barbels surrounding its mouth.

Interestingly, different species of catfish live in the seas of every continent, in both freshwater and saltwater.

Notably, catfish is one of the most popular fish in the United States—and around the world—due to its taste and inexpensive price.

Additionally, this healthy fish has one of the lowest mercury concentrations in the ocean and only contains 0.024ppm (4).

Key Point: Catfish are tasty, cheap, nutritious, reasonably high in omega-3 and one of the least contaminated fish around.

Shrimp is a type of shellfish that belongs to the crustacean family of animals.

They are also very similar to prawns, and the two names are often used interchangeably, despite the two being slightly different.

People harvest shrimp for food all around the world, and they are the most popular seafood in the United States.

On the positive side, shrimp contain the least mercury out of everything in this list – just 0.009ppm (4).

Why is Omega-3 Important?

First of all, our body cannot make omega-3 fatty acids, and so we need to obtain them from our diet.

Throughout history, evidence suggests that humans consumed an approximate 1:1 dietary ratio of omega-6 to omega-3.

Sadly, these days estimates place the rate at anything up to 20:1 in favor omega-6. This ratio is such an imbalanced level, and it likely causes a pro-inflammatory state in our body (15).

Since inflammation has links to almost every chronic disease in existence, we should do what we can to reduce our consumption of foods high in omega-6 (16, 17).

In other words, by cutting down on vegetable oils (such as soybean and corn oil), we can avoid most of this excessive omega-6.

Including a source of fatty fish two or three times per week can also make a positive difference.

Why Should We Choose Low-Mercury Seafood?

Humans have done a good job of polluting the environment.

Unfortunately, pollution of the oceans with heavy metals such as mercury is a big problem. Worse still, the fish and seafood we eat contain this heavy metal in various concentrations.

Mercury can build up in our body over time, and researchers believe that exposure poses long-term health risks.

To be specific, these risks include neurological diseases such as ALS, kidney problems, and impaired development in children (18, 19, 20).

While this research is still ongoing and there is currently no conclusive evidence of causation, it’s better to err on the side of caution.

In contrast, there are some hypotheses that fish with a higher concentration of selenium than mercury may not be a problem. The theory here is that since selenium can bind mercury, there won’t be any “free mercury” to affect our body negatively.

However, there are some problems with this belief;

This excellent infographic from the National Resources Defense Council gives an overview of mercury in fish.

Specifically, the graphic ranks fish from those lowest in mercury to the fish with the highest concentrations.

All in all, most people are eating way too much omega-6 and far too little omega-3.

The nine fatty fish listed in this article are among the healthiest of seafood.

As a result, they probably deserve a place on your plate.

How to Cook Salmon: Perfect Fillets Every Time

I was looking for a replacement for salmon, as salmon farming has contributed to the decline of the Southern Resident Orca population. Even if I buy wild caught salmon now I feel like I am taking fish out of the mouths of an endangered species. I’m wondering if switching to trout will be less harmful.

If you’re looking for the most eco-friendly option, then pink salmon might be worth looking into. As far as I’m aware, the orcas only eat Chinook salmon. You can find more info on the different types of salmon here: https://www.nutritionadvance.com/types-of-salmon/

I avoid eating fish because of the mercury. Is taking fish oil a good substitute instead of eating fish?

For omega-3 it can be. However, you will be missing out on the other nutrients (protein, vitamins, and minerals) that fish offers. Also, if you’re going to buy omega-3 supplements then the quality can vary quite a lot from brand to brand.

For example, some products have been shown to contain contaminants like heavy metals, incorrect amounts of omega-3 compared to the label claims, and oxidized fats.

To find a good supplement, there is a listing of how the major brands performed in consumer tests here: https://labdoor.com/rankings/fish-oil/quality

What is the serving size you’re using for the Omega 3 levels listed for each fish?

Love the information here. The mercury issue is a serious consideration when it comes to fish. It’s easy to get overwhelmed when trying to work out the best way to get enough omega-3 and also avoid mercury.

I’m glad that salmon makes it onto the list. It may be a fairly expensive choice but it certainly tastes amazing.

(Wild) salmon is definitely the best fish option… perhaps sardines are more nutritious overall, but the taste/health combo of salmon wins out!

Glad you found it useful!