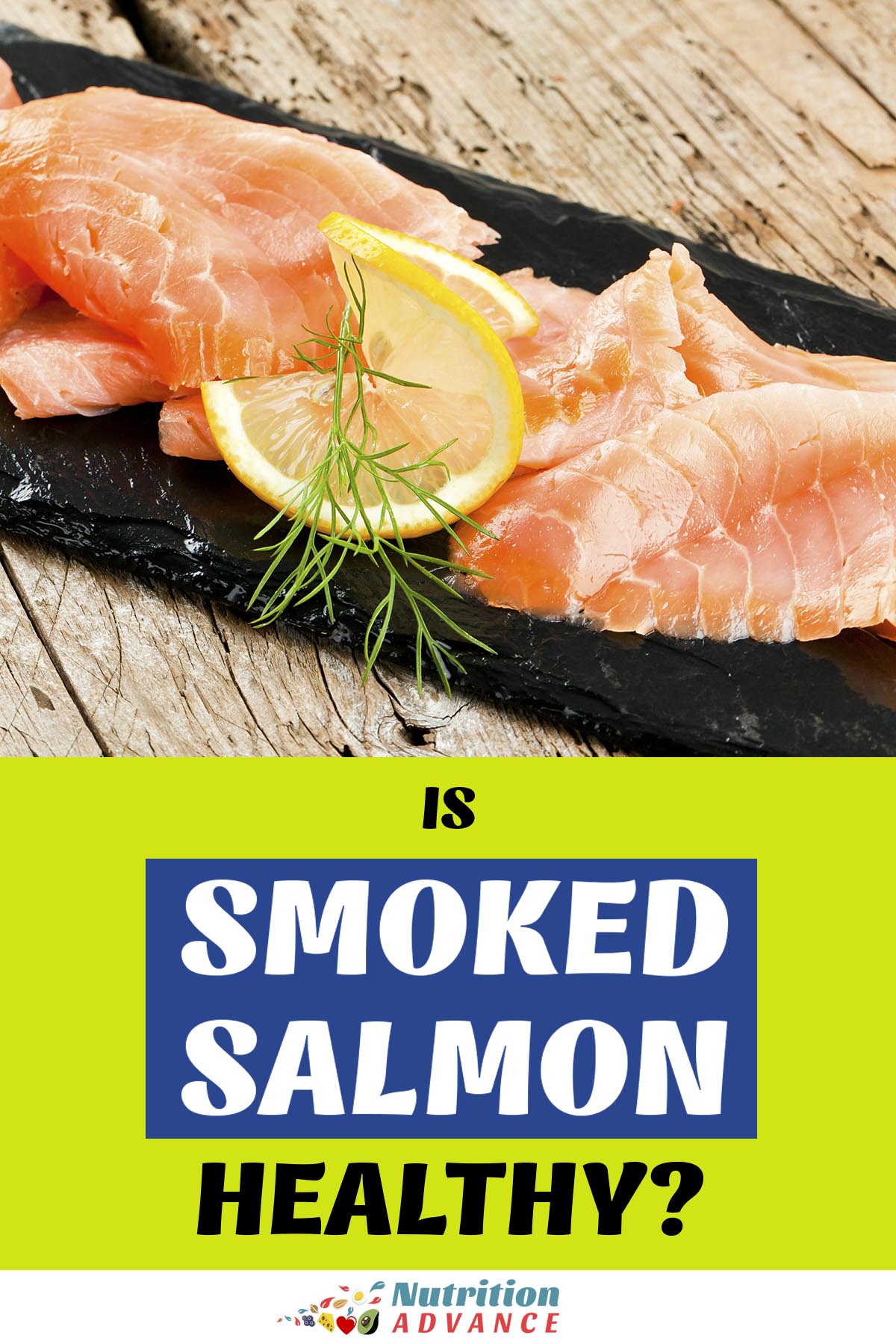 Smoked salmon is a salt-cured preparation of salmon that can be either cold or hot smoked.

While the omega-3 benefits of oily fish are well known, is smoked salmon good for you too?

This article looks at the production process of smoked salmon, its nutritional benefits, and some potential concerns.

Is it a healthy choice?

What Is Smoked Salmon? 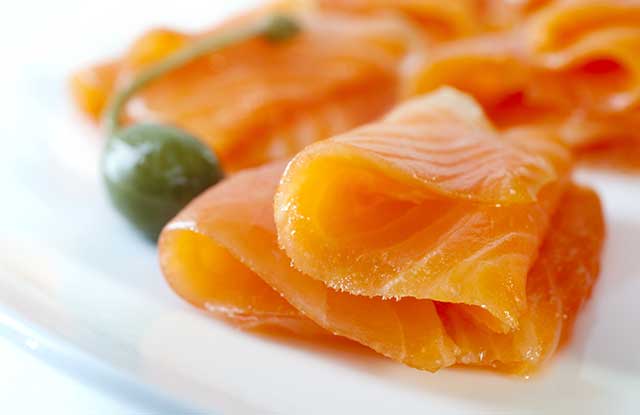 Smoked salmon refers to any salmon that undergoes a curing and smoking process.

These smoking processes can be vastly different depending on the specific producer, and they can either smoke the fish at high heat or leave it technically raw.

Smoked salmon has a slightly different nutrition profile to a regular salmon fillet, but it shares most of the same benefits.

However, it does tend to have a stronger and more flavorful taste than fresh salmon does, and it is also more expensive.

This way of preparing salmon has a long history, and smoking the fish was a traditional method of preservation before the advent of refrigeration.

Although the exact origins are debatable, it appears that smoked salmon has been around since ancient times (1).

Smoked salmon is a popular ingredient in salads and canapés, and common accompaniments include capers and cream cheese.

Key Point: Smoking salmon was traditionally a way of preserving and cooking the fish. In recent times, the production of smoked salmon is purely for the taste profile.

How Is Smoked Salmon Made?

The production process of smoked salmon depends on whether the producers use the cold-smoking or hot-smoking method.

First of all, the salmon undergoes a brining process in a salt-water solution that may also contain (minimal amounts of) sugar and herbs and spices.

After this, the salmon goes through the smoking process.

Here is a summary of the production methods for cold-smoking and hot-smoking.

As a result, cold-smoked salmon is still technically raw, and it has a more delicate, tender texture.

According to the FDA, the temperatures/times and process to safely cold-smoke salmon are as follows (2);

The temperatures used during the cold-smoking process should either;

Generally speaking, the majority of cold-smoked salmon producers use a temperature not exceeding 99°F (37°C) (3).

The process is as follows (4);

Unfortunately, the total cooking times used during the hot-smoking process are unavailable as they can vary depending on the size and type of the fish.

Firstly, the exact nutritional values will depend on the specific type of salmon used for smoking.

However, there isn’t a vast difference from species to species.

Note: Salmon is also a rich source of vitamin D, but the USDA Food Composition Databases doesn’t include this data for smoked salmon.

As shown, smoked salmon is an excellent source of selenium, and it is also high in sodium, phosphorus, and copper.

Key Point: Smoked salmon has a fairly good nutrition profile, and it provides a large source of omega-3, vitamin B12, and selenium. 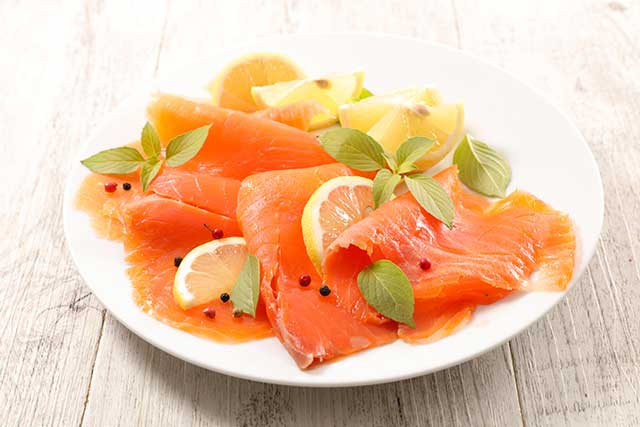 As a nutritious food from the sea, smoked salmon offers several nutrition benefits.

Similar to all salmon products, whether fresh fish, salmon roe, or processed salmon foods, the smoked version of the fish is rich in omega-3.

EPA and DHA are the most bioavailable way to get omega-3 in our diet, and their absorption rate is much higher than ALA (found in seeds and plant foods) (7).

With more than 18 grams of protein per 100 grams, smoked salmon is an excellent source of protein.

Among these compounds, astaxanthin appears to have several benefits for skin health.

On this note, studies suggest that a higher intake of astaxanthin may help to improve our skin’s UV resistance (9, 10).

Additionally, a wide range of studies on lutein and zeaxanthin appear to support a beneficial impact on visual health (11).

For little more than 100 calories, smoked salmon provides a wide range of essential nutrients including large amounts of key vitamins such as B12. 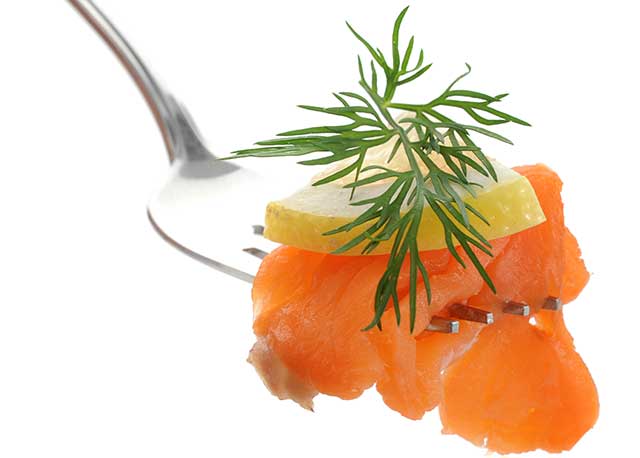 Although there are several health benefits, there are also some potential drawbacks of smoked salmon.

Here is a summary of some of the main concerns people have.

While salt is an essential mineral and perfectly healthy in reasonable amounts, too much salt can cause problems for some people.

This is especially true for individuals who are known as ‘salt sensitive,’ and for these people, higher salt intake can dramatically raise blood pressure (12, 13).

For this reason, anyone with salt sensitivity should be aware that smoked salmon is a reasonably high sodium food.

The salt content will vary from brand to brand, but as shown in the nutrition facts section, you can expect smoked salmon to contain around 784 mg of sodium per 100 grams (5).

Key Point: Smoked salmon might not be suitable for people with salt sensitivity.

One common question that people have about smoked fish products is whether the smoking process can damage heat-sensitive omega-3 fatty acids.

There is not a lot of research on this topic, but some of the existing studies have interesting findings.

For instance, one study found that oils from salmon exposed to high-temperature smoking at 95°C (203°F) contained fewer oxidation products than oil from fresh salmon (14).

The likely reason for this is that fresh fish spoils quickly, and smoking helps to preserve its freshness.

On this note, an earlier study found that “processing operations such as salting, cooking, and mincing promote oxidation while smoking, dehydration, and freezing retarded oxidation” (15).

However, this may depend on the smoking method, and excessive temperature/time might potentially cause problems.

Key Point: Oxidation products in smoked salmon don’t appear to be a big problem. However, hot smoking methods have more of an adverse effect on fatty acids than cold-smoking.

Polycyclic aromatic hydrocarbons (PAHs for short) are a group of chemical compounds that occur during the burning of materials such as coal and wood (17).

As a result, foods such as smoked salmon may contain these compounds, some of which are classed as carcinogenic (18).

A systematic review of observational studies on the effects of PAHs found that they are associated with an increased risk of cardiovascular disease and blood pressure. However, these are observations rather than proof of causation (20).

Cold-smoked salmon is recognized as a risk for Listeria monocytogenes, a bacteria that can cause a foodborne infection called listeriosis (22).

Listeriosis is a severe condition which can be fatal in some cases, especially for high-risk groups including young children, the elderly, and those with weak immune systems. Since cooking (i.e. hot temperatures) kills the bacteria, it is primarily linked to cold-smoked salmon rather than hot-smoked products.

An outbreak of listeriosis, linked to ready-to-eat salmon products, infected 12 people in Denmark, France, and Germany between 2015 and 2018. Sadly, these 12 cases included four deaths (24).

Despite this, it is worth remembering that listeriosis is extremely rare.

According to the Centers for Disease Control (CDC), there are approximately 800 laboratory-confirmed cases of listeriosis per year, 260 of which are fatal (25).

It is also important to note that almost any raw food can cause this illness, including raw milk, prepared salads, and other refrigerated products.

Key Point: Listeriosis is a (thankfully rare) foodborne illness that has been associated with cold-smoked salmon.

As we saw in this article, smoked salmon is a delicious, traditional and flavorful preparation of the fish.

Smoked salmon offers similar benefits to the fresh variety, and it is a great source of omega-3, vitamin B12, and numerous minerals.

There are some potential health concerns, but these risks seem to be fairly small.

As an occasional food, smoked salmon is a perfectly healthy option.

However, for regular consumption, fresh salmon is probably a healthier choice.

2 thoughts on “Is Smoked Salmon Healthy?”