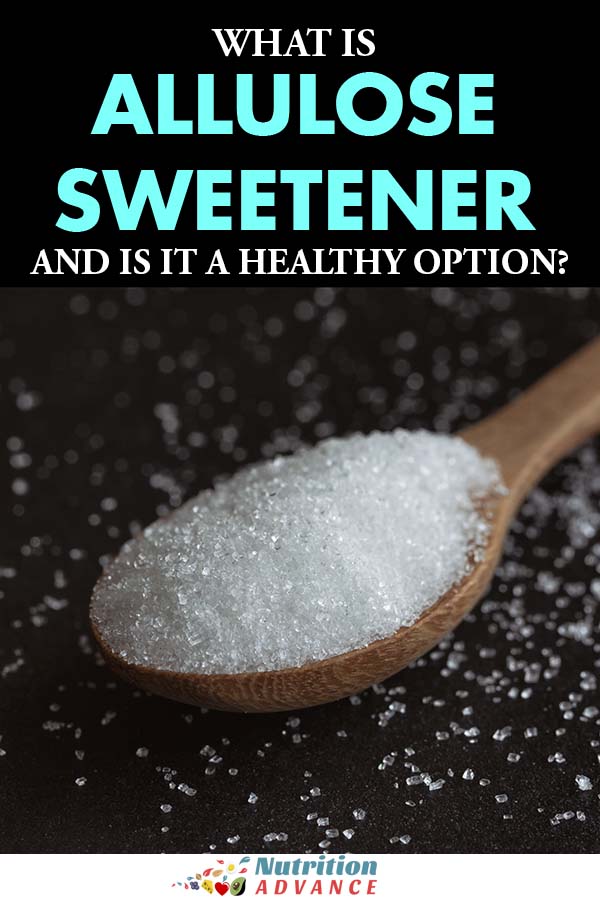 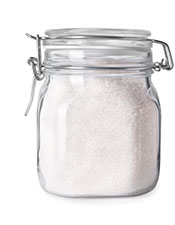 There is a long line of sugar alternatives out there already, but allulose is the latest popular choice.

The claims about allulose state that it has all the taste of sugar without the calories.

However, is this sweetener a healthy option or is it too good to be true?

This article examines what allulose is, and the potential benefits and drawbacks it has.

Otherwise known by the name D-Psicose, allulose is a very low-energy sugar that naturally exists (in small amounts) in various plant foods, most notably corn.

It is also commonly referred to as a “rare sugar.”

Scientists first discovered how to produce allulose in 1994, and it went on commercial sale for the first time in 2015 (1).

Tate & Lyle claims that allulose is non-glycemic, and 70% as sweet as sucrose (sugar) with the same taste properties (2).

In contrast to sweeteners such as stevia that can have a bitter aftertaste, allulose tastes just like sugar.

Several products have started to use allulose as a sweetening agent, and this includes Quest bars among others.

Allulose is a monosaccharide, which is the simplest form of sugar, and it is known as a “rare sugar.”

However, there is a big difference between allulose and other forms of monosaccharides such as fructose and glucose.

The most significant difference is the number of calories the three offer.

Allulose is very low in calories. Despite claims that the sweetener is zero-calorie, it contains about 10% of the calories that regular table sugar does (3).

Either way, it is almost free of calories, but not quite.

The reason why this sweetener is so low in calories is that we do not actually metabolize allulose, and it does not digest into glucose. As a result, there is no impact on blood glucose or insulin levels, and almost 84% of the sweetener is excreted unchanged in the urine (4).

Since allulose is extremely low in carbohydrate, it has become popular with people following low carbohydrate and ketogenic diets. Allulose can be used in a wide variety of products such as baked goods, soft drinks, and anywhere else that uses sugar as an ingredient.

Key Point: Allulose is a very low-calorie sweetener that tastes just like sugar and has 70% of the sweetness.

What Is Allulose Made Of? 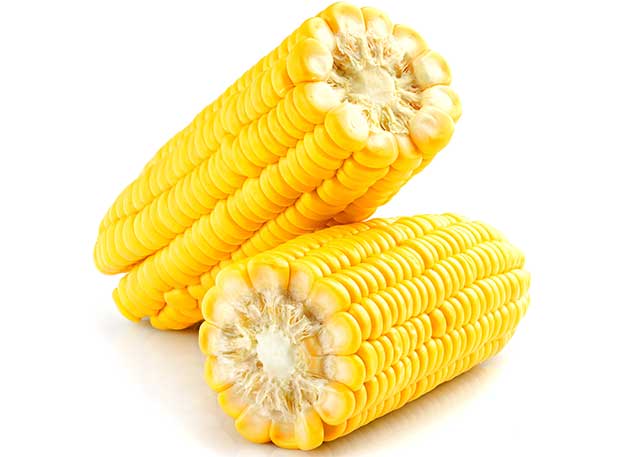 The main ingredient used to make allulose is corn.

First of all, an extraction process isolates the fructose in corn.

After this, the fructose is treated with an enzyme which converts it into allulose.

Although we know the production of allulose relies on the enzymatic conversion of corn, the process itself is “proprietary” (a trade secret,) so it is difficult to explain in greater detail.

In an interview with the food trends website ‘FoodNavigator,’ a vice president at Tate & Lyle explained (5);

“The simple way of explaining the process is that we take the carbohydrate from corn and then go through an enzymatic conversion process to produce allulose.”

In short; the production process combines the fructose within corn with enzymes to convert it into allulose, but we know little about the exact methods.

The sugar alcohol erythritol, which is the main ingredient in Swerve Sweetener, uses a seemingly similar enzymatic conversion of fructose in corn.

However, we do not know enough about allulose’s manufacture to compare these two processes.

Key Point: The production of allulose revolves around the enzymatic conversion of fructose.

What Benefits Does It Have?

There are several benefits that allulose sweetener can offer, and here are some of the primary considerations.

Using allulose in place of regular sugar may lead to better dental health.

First of all, sugar is a significant contributor to dental problems such as dental caries, and research demonstrates that sugar damages our teeth in a dose-dependent manner (6, 7).

The more sugar we consume, the worse the effect it has on our teeth.

However, allulose is different.

The enzymes in our mouth cannot break allulose down, so oral bacteria cannot feed on it like they can with regular sugar.

As a result, these bacteria cannot produce the by-product acids that attack tooth enamel.

Notably, it seems that allulose may even hold dental benefits.

Some initial research from the Faculty of Medicine at Kagawa University, Japan asserts that allulose effectively controls bacteria that can lead to periodontal disease (8). 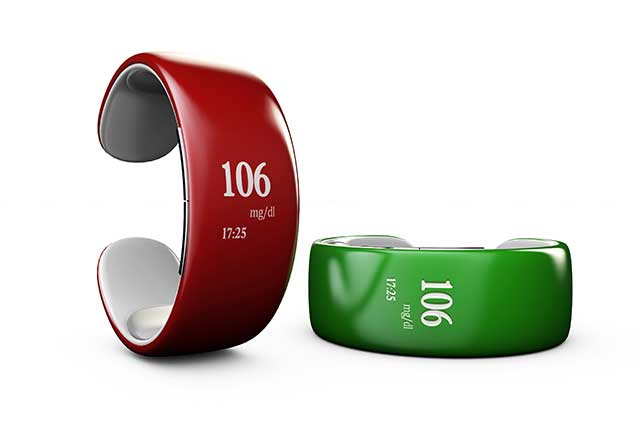 Numerous studies have looked into the effect allulose may have on blood sugar and insulin levels.

Some of these studies have been animal trials, and others used human participants.

Firstly, one study showed that consuming allulose alongside glucose lowers the blood sugar and insulin response in dogs (10).

Replacing sugar with allulose sweetener has a positive effect on blood glucose in animal models, but what do human trials show?

In a medium-term randomized controlled trial, 26 adults took either zero or five grams of allulose with three meals per day over a period of 12 weeks.

The results demonstrated “significantly lower” blood glucose levels in the allulose group. These blood sugar levels were lower while fasting and for up to 2 hours after each meal (12).

A reasonably large study from Korea suggests that supplementing the diet with allulose sweetener may help with weight loss.

This study was a randomized controlled trial featuring 121 Korean adult participants, and it investigated potential weight loss effects from low-dose allulose and high-dose allulose, alongside a control group using sucralose.

Markedly, the results found that supplementing with allulose decreased body fat in a dose-dependent manner (13).

But…. Allulose Is Not Magic

It is important to note that the benefits of the study above are not caused by adding allulose to the diet.

I know, it would be great to add some sweetener to our diet and magically lose some weight, but that isn’t how it works, unfortunately.

In contrast, the most likely explanation for the weight loss is that as the participants used allulose, they did not use sugar (or replaced caloric choices with the sweetener).

Additionally, knowing that you are in a weight loss trial can be a significant motivational factor in losing weight.

To sum up, this study still shows that allulose can assist with losing fat mass, but the important thing is what the sweetener is replacing.

Key Point: Allulose has a neutral/positive effect on our dental health. Additionally, as part of a healthy lifestyle, it may contribute to better glucose control, insulin sensitivity, and improved body composition. 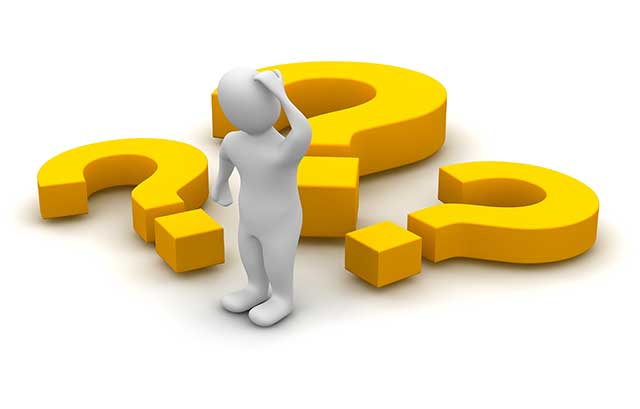 So far, we have established that allulose is a low-calorie sweetener that has several positive health effects.

Allulose Is ‘Generally Recognized As Safe’

In the United States, allulose has ‘generally recognized as safe’ (GRAS) status.

This designation means that the existing literature on the product satisfies the safety requirements of the FDA (14).

Although allulose is also available in other countries (such as Japan, Korea, and Mexico,) it does not currently have approval for sale in the EU.

On the positive side, allulose does not appear to cause any significant side effects.

Based on the totality of the evidence, there is little to suggest harm;

Despite the lack of side effects, there is a caveat; allulose is still a relatively new sweetener. At this time, long-term safety testing in humans does not exist.

Additionally, there is always the chance that some people may experience sensitivities to allulose as they do to other sweeteners.

Key Point: Overall, there is nothing to suggest allulose is not safe, but there is not a substantial amount of research at this time.

Is Allulose Safe For Diabetes?

Furthermore, a recent study looked specifically at the effect of allulose taken alongside carbohydrates for individuals with type 2 diabetes.

This particular study was a randomized controlled trial, and it featured 24 participants with type 2 diabetes.

The results of the study demonstrated that allulose could “moderately” reduce the postprandial response to glucose intake in people with type 2 diabetes (16).

All in all, the available research shows that allulose intake does not raise blood sugar levels. The sweetener may also help to improve fasting blood sugar and insulin sensitivity.

However, it is important for anyone with type 2 diabetes to speak to their medical team before making dietary changes.

Key Point: The current research suggests that allulose has a positive impact on blood glucose and insulin levels.

How To Use Allulose

Allulose is a common ingredient in sugar-free baking, and it acts as a straight sugar replacement in recipes.

Furthermore, it is possible to use allulose to sweeten a wide range of foods and drinks such as tea, coffee, desserts, sauces, and more.

In other words, use allulose like you would use regular sugar.

Where To Buy Allulose

Allulose is available in both granulated and syrup form, and it may be possible to find it in a local health food store.

However, there is also a wide range of allulose goods available online.

Allulose is an alternative to sugar that tastes just like the real thing.

The sweetener also seems to offer several benefits such as improved blood sugar and insulin levels.

Although there are no indications of any side effects or other drawbacks at this point, the existing evidence base is only small.

Overall, using allulose as a replacement for sugar appears to be a healthy choice.

For a look at an alternate sweetener, see here for a review of monk fruit.