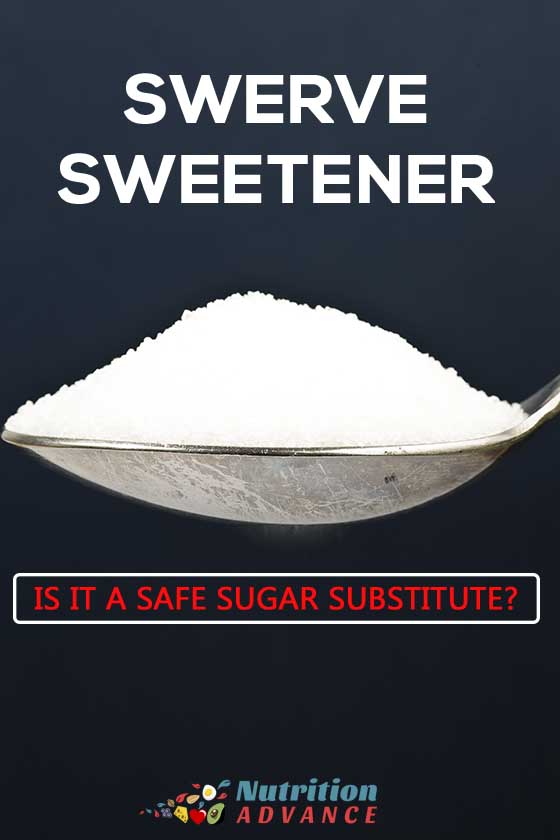 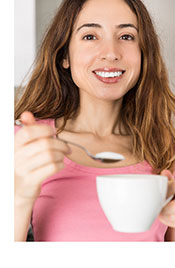 Swerve sweetener is a sugar substitute that often receives the “natural” tag, and it is the self-proclaimed “ultimate replacement for sugar.”

This article examines whether that claim is really true.

With the popularity of low-carb and keto diets, more people are looking into sugar replacements for their kitchen.

As a result, there are a vast number of natural and artificial sweeteners on the market, but is Swerve a safe choice?

What Is Swerve Sweetener?

First of all, Swerve is a sweetener produced by a company of the same name: Swerve.

Low carb dessert and baking enthusiasts love Swerve and use it for a wealth of different recipes.

It can also be used as a straight swap for sugar to sweeten drinks such as coffee and tea.

The company who make it claim that their sweetener is natural and safe, as shown in the quote below;

In this article, we will try to verify these claims of safety. 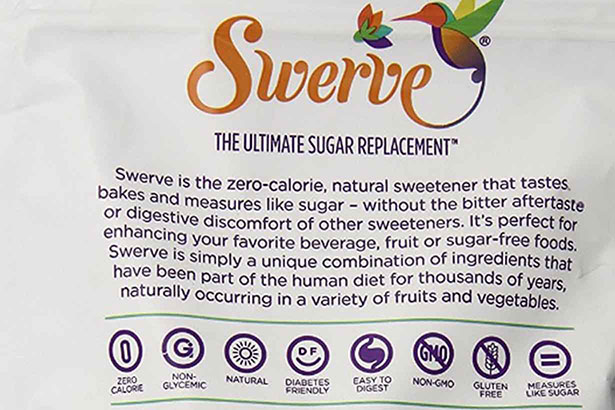 First of all, let’s examine the three ingredients that Swerve contains.

The product is a blend of three supposedly natural ingredients;

Swerve comes in two varieties; one is granulated, which has a texture similar to regular table sugar.

The sweetener also comes in a powdered confectioner’s style.

Erythritol is the main ingredient in Swerve, and it is a sugar alcohol derived from corn (1). While it looks and tastes similar to sugar, it has almost none of the calories.

Despite its “natural” reputation, erythritol is an industrial product. As part of its manufacture, a hydrolysis process extracts glucose from corn.

Next, the producers add a type of yeast — often Moniella — which ferments this glucose.

Finally, the product is cleaned by filtering and then undergoes a crystallization process, resulting in erythritol (3).

Surprisingly, the initial discovery of erythritol came way back in 1848, Scotland (4).

According to Swerve, their erythritol is certified non-GMO.

Oligosaccharides are a type of prebiotic fiber that naturally occurs in various plants (5).

Swerve uses an extract of this fiber initially derived from vegetables. Although the manufacturer does not disclose the exact source, we can guess based on the plant foods that are high in oligosaccharides.

Typically, the sources of these sweet-tasting compounds are vegetables such as chicory root, garlic, leek, onions and scallions (6).

Oligosaccharides add to Swerve’s sweet taste, and as they are prebiotic fiber, they may provide some benefits for our gut bacteria too.

Food products often label this ingredient as ‘inulin,’ which is a common alternate name. 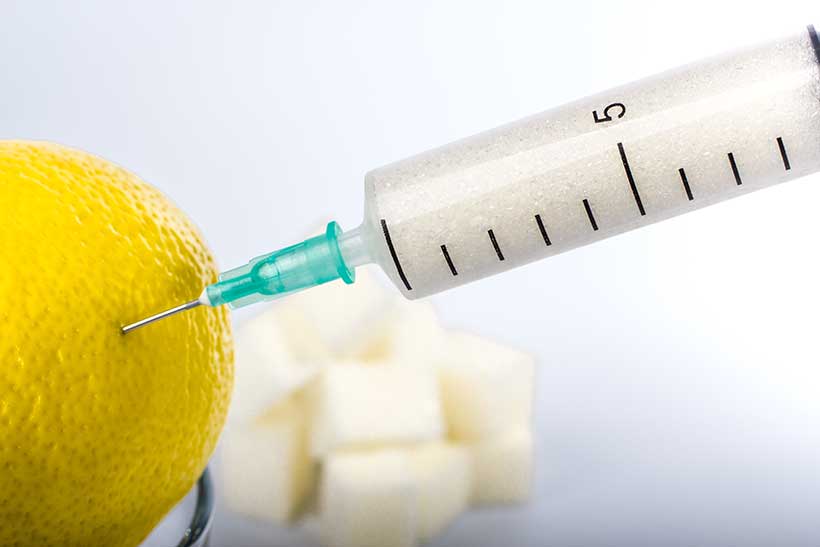 While ‘natural flavors’ certainly sounds better than ‘artificial flavors,’ they are not so different in reality.

On the other hand, natural flavors use a chemical initially found in nature.

After extracting and modifying this ingredient, it is then mixed with various other things.

In fact, these ingredients can number in the hundreds, and the extraction process often uses solvents (7, 8, 9, 10, 11).

Sadly, the legislation surrounding the use of the term ‘natural flavors’ is lacking.

Providing an extract originated from food, it doesn’t matter what happens next.

In other words; that extract can be fried, boiled, mixed with various solvents, or anything else the flavor producers want to do.

And it still gets to keep the name ‘natural.’

Personally, I view ‘natural’ and ‘artificial’ flavors as the same thing; neither is something you will find in nature.

How Are Swerve’s Natural Flavors Made?

Unfortunately, this information is not public.

The real question is; what process is used to make the flavors?

Unless this information is made available, we don’t know.

Key Point: Swerve sweetener is a combination of erythritol, inulin, and (not so) natural flavors. 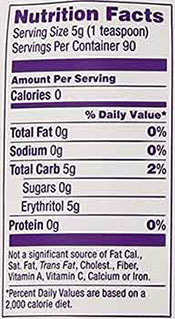 How Many Carbs Are In Swerve?

While Swerve sweetener’s label claims to be ‘zero-calorie,’ this isn’t entirely accurate.

For example, according to the FDA label requirements, anything containing less than five calories per serving can be called zero-calorie (12).

The serving size for Swerve is listed as one tsp (4g). While this might be okay for a cup of coffee, baking recipes call for cups rather than teaspoons.

Despite this, the actual calorie content is still reasonably low; Swerve contains 51 calories per cup serving.

Although this sounds very high, the body doesn’t metabolize these carbs.

As a result, erythritol is non-glycemic and does not affect blood sugar and insulin levels (13).

Key Point: Swerve contains 51 calories per cup and a small amount of carbohydrate. However, these carbs have no impact on blood sugar levels.

To understand the safety profile, we have to examine each of the ingredients.

Erythritol is the main ingredient in Swerve sweetener.

I set out trying to find both positive and negative impacts of erythritol, but the studies are generally positive.

In a study looking at pre-diabetics, a daily dose of erythritol for two weeks did not affect blood glucose levels (14).

Additionally, unlike natural sugars, erythritol appears to have a positive impact on dental health. Studies show that it inhibits harmful bacteria and reduces plaque – even more so than xylitol does (15, 16).

And most significantly, toxicity and carcinogenicity tests on erythritol show that it’s very safe for humans.

Overall studies on inulin appear to be very positive.

Another study also shows that inulin had a significant effect on decreasing fasting glucose levels in forty-four subjects with prediabetes (23).

Of course, these doses are much higher than what you will find in a few servings of Swerve sweetener. However, they do show that oligosaccharides are beneficial for health rather than something to cause worry.

As previously mentioned, ‘natural flavors’ can include hundreds of different ingredients.

Therefore, it is difficult to know precisely what these ‘natural flavors’ contain. 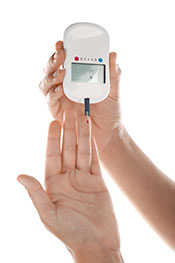 People with diabetes are some of the biggest consumers of low-carb sweeteners.

Therefore, it is essential to know what effect Swerve may have on blood glucose and insulin levels.

As shown while discussing the various ingredients, nothing in Swerve appears to impact blood sugar adversely.

In fact, it appears that these ingredients may reduce fasting glucose levels.

However, it is important to note that anyone with diabetes should always discuss dietary changes with their medical team.

For one thing, using Swerve as a replacement for sugar may require existing medication doses (such as insulin) to be lowered.

Is Swerve Safe For Children?

Unfortunately, there is nothing specific in the literature concerning the safety of the ingredients in Swerve for children.

However, there is also no reason why it should cause harm.

After all, children and adults are not so different biologically. Furthermore, the FDA would not allow a baking product to go on sale if it was explicitly harmful to children.

It is worth remembering that children are little, though, and this means that their digestive system is only small too.

As a result, any digestive sensitivities to erythritol would be “felt” at a lower dose than what a fully grown adult would experience.

If a child displays any discomfort after trying food containing Swerve, then its use should be discontinued.

One potential adverse effect to be aware of is that sugar alcohols, including erythritol, are capable of causing mild side effects.

These side effects revolve around high-dose consumption causing slight digestive discomfort such as bloating and gas.

The reason this can occur is that we don’t fully digest sugar alcohols and they are left to ferment in the intestines, which leads to the above symptoms.

However, these side effects of erythritol are uncommon in anything other than high doses.

For instance, controlled studies demonstrate erythritol is “well-tolerated” at repeated daily doses of 1 gram per kg of body weight, for seven consecutive days.

Key Point: Generally speaking, the ingredients in Swerve Sweetener have positive effects on health. However, the unknown nature of natural flavors is not ideal.

How Does Swerve Sweetener Compare To Stevia?

Both Swerve and stevia are natural sweeteners, and many people wonder which one is best.

The truth is that both these sweeteners are reasonably good choices, especially in contrast to their artificial alternatives.

Stevia has a mild, slightly bitter aftertaste which some people dislike (24, 25).

It’s also not as well suited to baking as Swerve is. For instance, Swerve serving sizes are simple because it’s a like-for-like, cup-for-cup sugar replacement.

In contrast, working out the required serving size of Stevia necessitates some guesswork.

While the refined version is similar to Swerve concerning the natural flavors and unknown ingredients, the whole-leaf version is not.

Whole-leaf stevia is merely the dried green leaves of the stevia plant; nothing is added nor taken away, no extractions, and it is 100% natural.

However, whole stevia leaves are much milder in sweetness, and they would not be suitable for baking.

Key Point: Stevia and Swerve sweetener are quite similar. If the taste is your top priority, then go with Swerve. If you want something as close to nature as possible, go with unrefined stevia leaf.

First, they are both very sweet, contain no digestible carbs, and substitute for sugar in many foods and drinks.

However, when it comes to their safety profile, there is one clear winner: natural sweeteners.

The links between artificial sweeteners and cancer, weight gain and gut health are unclear.

While some studies find connections, others do not.

To summarize, here are a few recent negative findings on artificial sweeteners:

However, in the interest of balance, there are also many studies showing no link between artificial sweeteners and illness (36, 37, 38, 39).

But why take the chance of using artificial sweeteners when we can use something that appears to be much safer?

One of the most intriguing and evolving areas of research concerns sweet taste perception.

Sweet taste has an impact on the ‘reward center’ of our brain, activating dopamine receptors. This action may profoundly influence satiety and the amount of food we want to eat (40, 41).

Researchers query whether this might be the reason for artificial sweeteners having a link to weight gain; perhaps they decrease the satiety response and thus encourage over-consumption of food (42).

However, most of this research is on artificial sweeteners and, unfortunately, very little exists on erythritol.

Could “natural” sweeteners like Swerve sweetener have the same effect on dopamine receptors?

With this in mind, it may be better to avoid any form of sweetener should you be prone to sugar (or sweet taste) cravings.

Key Point: Artificial sweeteners may impact the reward center of the brain in the same way sugar does. However, little research is available on erythritol, the main ingredient in Swerve sweetener.

Where To Buy Swerve?

Swerve sweetener is available in many health stores, including Whole Foods. If you cannot find it offline, then you can also buy on Amazon.

If you buy this product, then you will probably want some ideas for what to do with it.

Just to repeat; it is a like-for-like sugar replacement, so you can use it in the same amounts as you would use sugar.

Is Swerve Good or Bad For You?

So, is Swerve sweetener a healthy replacement for sugar?

Well, sugar is one of the worst ingredients in the modern diet, and Swerve certainly makes a great substitute.

However, I wouldn’t specifically call it ‘healthy.’

Despite this, the safety profile of Swerve is relatively good, and there are no standout concerns.

All in all, there is nothing wrong with using it for an occasional sweet treat.

But it is always best to base diets around nutrient-dense whole foods.

For more on sweeteners, see this guide to the sugar alcohol sorbitol.

137 thoughts on “Swerve Sweetener: Is it a Safe Sugar Substitute?”