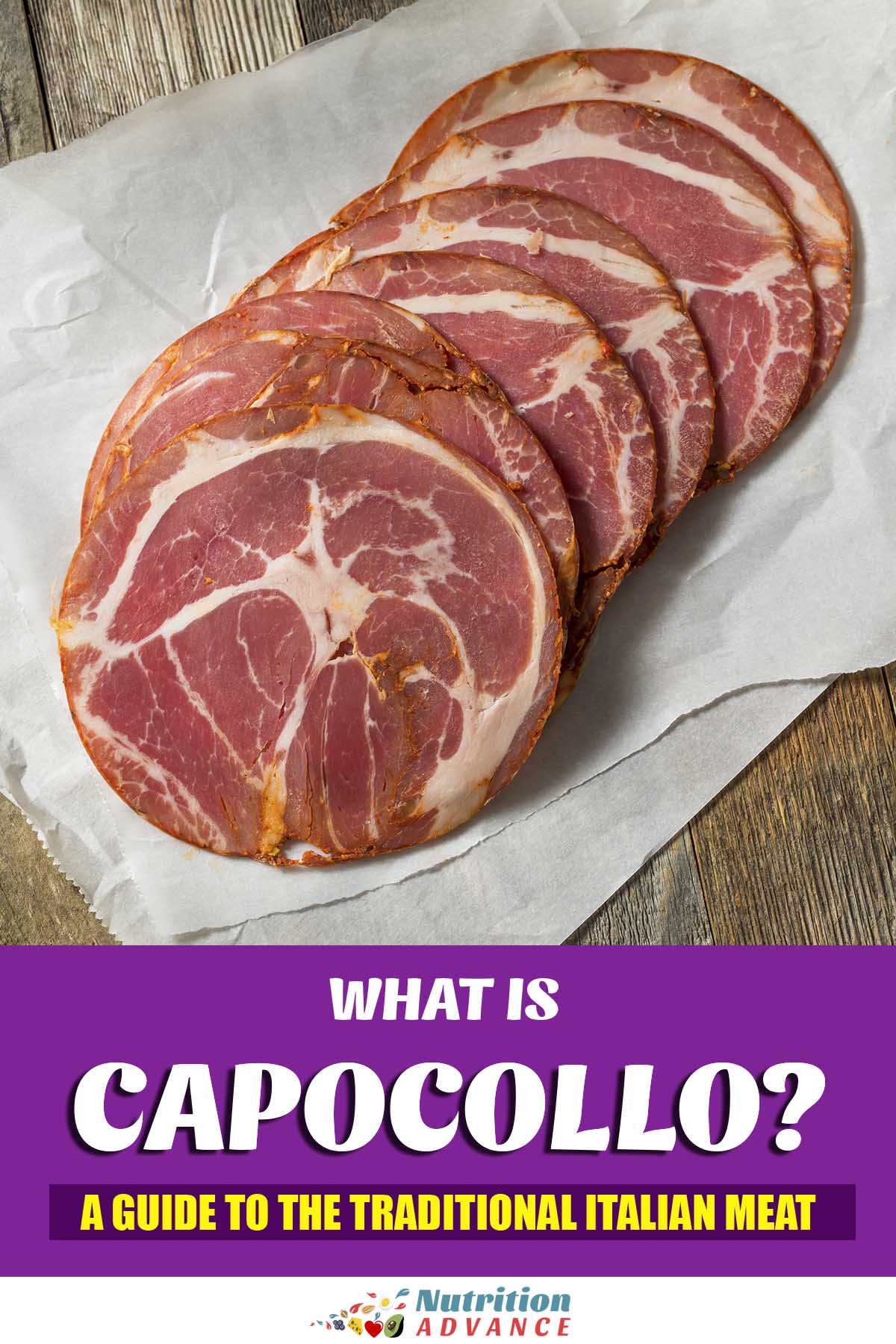 Otherwise known by the names coppa, capicola, and gabagool, capocollo is one of Italy’s most famous cured meats.

While not as well known as other cured meats like jamón, prosciutto, and pepperoni, capocollo is one of the most valued culinary cuts.

This article provides a guide to capocollo, the production process, nutrition profile, and how to use it. 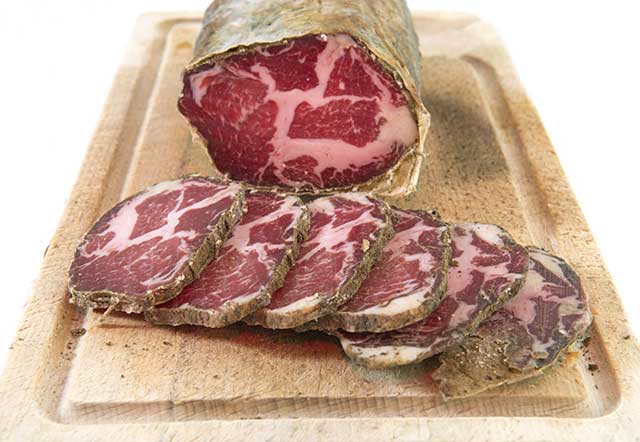 Capocollo is a seasoned, cured, and thinly-sliced cold cut of pork taken from the neck or shoulder.

Historical records demonstrate that capocollo has been in production since the early 1800s, but its first origins may go back to somewhere between the 8th and 5th century BC (1).

While the production process is similar to prosciutto, capocollo is from a different cut of meat, and it contains seasonings in addition to just salt.

How Does It Taste?

Capocollo has a soft and tender texture, it is slightly chewy, and it has a fatty, salty, and spicy taste.

However, the herbs and spices are not overpowering, and they add a delicate flavor.

The exact flavor can differ from product to product, as the herbs and spices used in the production vary between different Italian regions.

Capocollo also has a thin texture like prosciutto, and it is much thinner texture than Spanish cured hams such as jamón.

Key Point: Capicollo is an Italian cured meat which has a soft and tender texture and a slightly spicy taste.

There are seven main varieties of capocollo, each with their own slightly different recipe;

Key Point: There are seven primary varieties of capocollo and all of them have a slightly different production process and recipe.

In the table below, you can find the basic nutrition profile for a typical capocollo product.

In this case, the product is from ‘Busseto Foods.’

The nutritional values come from the USDA Food Composition Databases (9).

Unfortunately, detailed food composition details for capocollo have not been published, so the data for the fat breakdown, vitamins, and minerals are missing.

However, based on published nutrition data for fresh pork shoulder meat (which is used to produce capocollo), the fatty acid breakdown per 100 grams would be as follows (10);

Additionally, the major nutrients include;

Key Point: Nutritionally, capocollo is high in fat and protein. This cured meat is also a good source of selenium, zinc, and B vitamins.

As shown in the nutritional values, capocollo offers a large amount of high-quality protein.

In addition, it is very high in selenium, which is an essential mineral that plays a role in DNA production and enhances immune health (11).

Capocollo is also an excellent source of B vitamins, including the crucial vitamin B12.

B vitamins have a wide range of important functions that include energy production, DNA synthesis and repair, and the production of various neurochemicals required by the brain (12).

Further to the nutritional benefits of capocollo, this cured meat is also very convenient and straightforward to prepare.

In other words; we can use it directly, and it requires no cooking, no preparation, and no time-consuming recipes.

Key Point: Capicolla is easy to use and it provides several essential nutrients.

Capocollo is exceptionally high in salt too.

As shown in the nutritional values, it contains more than four grams of salt per 100 grams.

Over the past several decades, salt has indeed been overly-demonized for its role in raising blood pressure. However, there are variable differences in the individual response to salt, and some people are ‘salt-sensitive’ (13, 14).

In such individuals, high salt intake can have an adverse impact on blood pressure, and it has links to hypertension (15).

For this reason, people who are sensitive to salt may wish to limit their capocollo intake or discuss with their physician.

Some, but not all, capocollo products may contain sodium nitrate or nitrite.

Nitrates and nitrites are preservatives that can (potentially) convert to nitrosamines. These compounds are thought to be carcinogenic (16).

High-heat cooking temperatures are thought to play a role in this conversion process, but it can also happen within the body (17).

Interestingly, though, these compounds may also convert to nitric oxide, which has a variety of health benefits (18).

How Much Nitrate and Nitrite Does Capocollo Contain?

A recent study on the amount of nitrate/nitrite in food found that capocollo has a much lower amount than bacon and even many vegetables.

Using the study’s data as a source, the table below shows the mean amount of nitrate and nitrite in capocollo compared to other cured meats and vegetables (19);

For those who have concerns over nitrate/nitrite consumption, vitamin C is thought to help inhibit nitrosamine formation (20).

Additionally, some capocollo products only use salt for preservation, so nitrate-free options are also available.

Key Point: The salt and preservative content of capocollo may be a concern for some people.

How To Serve Capocollo 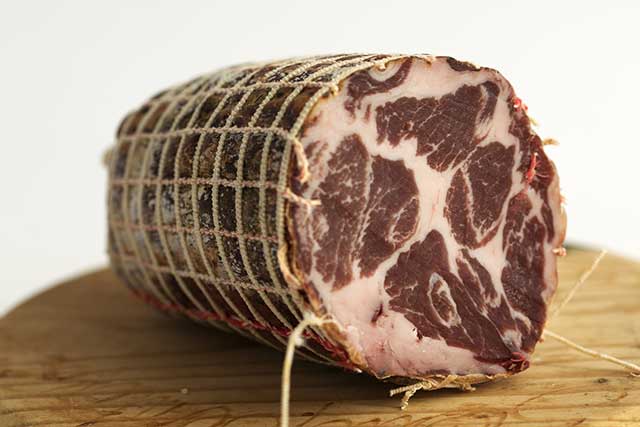 Capocollo is a versatile cured meat, and we can use it in many different ways.

Commonly, people serve capocollo in sandwiches, on pizza, in salads, and as part of cheese platters.

Here are two more tasty ways to use the meat.

Chicken breasts can be a little boring served plain, and wrapping them in capocollo can add some flavor.

Two tasty ways to do this include;

2) As Part of a Cheese Board

Combining capocollo with some different types of cheese, cured meat, and fruit can help to make a delicious cheese board.

Some different ingredients to consider could include;

Overall, capocollo is a delicious and traditional Italian cured meat that offers lots of flavors.

Capocollo is also a good source of several nutrients, particularly protein, selenium, and B vitamins.

There are also some common concerns surrounding this—and all—cured meat.

However, in reasonable amounts, this cured meat can be a tasty addition to the diet.

For more on cured meats, see this guide to traditional salami products.