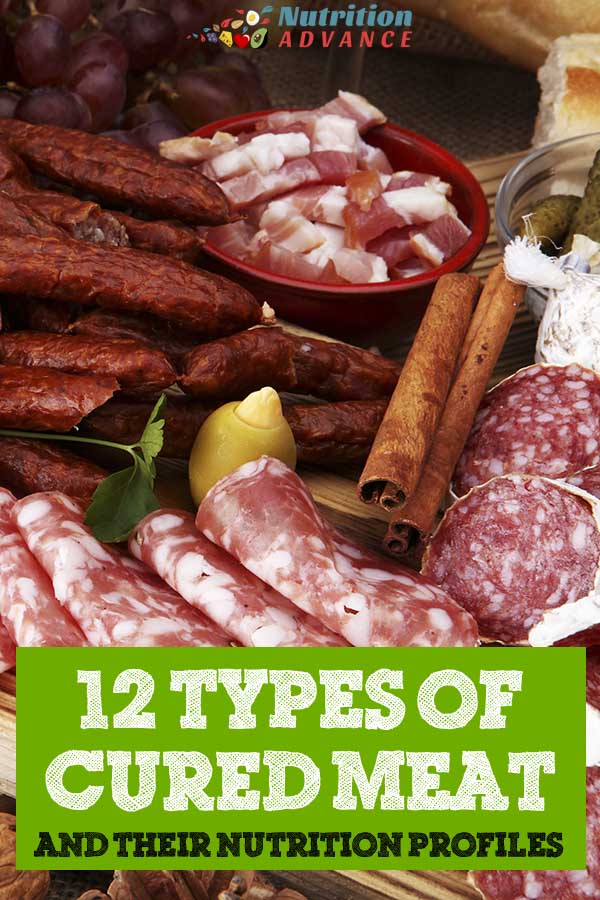 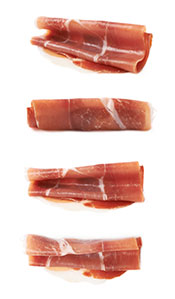 Cured meats have been one of our most traditional foods going back to ancient times.

They are a popular part of Mediterranean diets and often play a starring role in tapas and antipasto dishes.

While you probably already know jamon, prosciutto and salami, there are many other interesting options too.

This article takes a look at 12 different types of cured meat alongside their nutrition facts and profiles.

What is Cured Meat?

Before we delve into the 12 types of cured meats, let’s first examine what cured meat is.

To put it simply; curing involves the salting, drying and aging of meat as a way of preservation, slowing spoilage, and preventing the growth of harmful bacteria.

Before refrigeration, curing was a lot more common (and necessary) than in today’s age of convenience.

In other words; if we didn’t cure out meat, we wouldn’t have had any!

We tend to cure meat in two different ways;

Cured meat tends to have a deeper flavor and softer texture than fresh meat and people sometimes refer to it as ‘cold cuts’.

However, not all cold cuts are cured/fermented, and some are just precooked hams.

Although this isn’t always the case, cured meat usually comes in the form of dry-cured beef/pork sausages (such as salami) or whole muscle meat slices (like prosciutto).

Key Point: Cured meat is simply meat that has been preserved to prevent spoilage. It has a unique taste and texture.

For each one, you will find information on the history, nutrition profile, and interesting trivia. Cervelat is a kind of cured sausage with origins in Switzerland.

However, it is also produced in some regions of France and Germany.

History shows that this dry-cured sausage was first mentioned back in the mid-16th century.

At that time, it was made in a very different way and the recipe called for a mixture of beef brains and meat.

In modern times, the ingredients include a tasty mix of bacon, beef and pork alongside various spices for seasoning.

Unlike most cured meat, cervelat is often cooked before eating and the sausage is typically boiled, fried or grilled.

Key Point: Cervelat is a traditional dry-cured Swiss sausage made from a variety of meats and spices. One of the better-known types of cured meat, chorizo is a Spanish pork sausage with a spicy flavor.

Similar to cervelat, chorizo has a long history and predates the industrial revolution (2).

Chorizo has an interesting taste; it is a little bit spicy and very fatty but in a good way.

As shown in the ingredients box chorizo is seasoned with a kind of smoked paprika known as ‘pimenton’.

Pimenton plays a prevalent role in Spanish cuisine, and it is responsible for the red color of chorizo.

Depending on the type of pimenton, chorizo will either be classed as picante or dulce. The former uses spicy paprika while the latter uses a sweet variety.

Since chorizo is made from a mix of pork and lard (pork fat), it has a higher calorie and fat content compared to other cured meats (3).

Key Point: Chorizo is a spicy dry-cured Spanish sausage and it is one of the most popular cured meat varieties. Coppa marks the first entry for an Italian cured meat.

The pork shoulder is served in thin slices which have a deep flavor.

There are several different variants of coppa and all use their place of origin within their name.

In total, coppa is produced in six different Italian regions and each variety is named accordingly;

As shown above, the varieties of coppa written in bold have Protected Designation of Origin (POD) status under EU law. Culatello is another cured meat originating from Italy and it dates back to the 14th century (5).

The full name includes the region from where it is produced; Culatello di Zibello.

Although not as famous internationally as cured meats like prosciutto, culatello has a stellar local reputation.

In fact, the locals refer to it as the “king of cured meats”.

Culatello di Zibello has a mild and slightly sweet flavor which somewhat depends on the aging time – some versions are over three years old.

As you can see in the nutrition profile, culatello is slightly leaner than other cured meats and this shows in the fat (and calorie) content (6);

Key Point: Culatello is a cured and seasoned Italian pork thigh. Some people call it the king of cured meats and it certainly tastes delicious. Guanciale is a type of cured meat made from pork cheeks.

In fact, the name comes from the Italian word for ‘cheek’, which is ‘guancia’.

Once again, this cured meat hails from the country of Italy.

Despite being made from a different part of pork, it slightly resembles pancetta, but it has a more flavorful taste.

On that note, some people refer to it as ‘the belly pork of cured meat’.

Guanciale contains high amounts of fat, so you only need a little as it is very rich (7);

Key Point: Guanciale is a very fatty cured meat that almost melts in the mouth. If you like bacon and pork belly, you should give this a try. Hailing from Spain and Portugal, Jamón is one of the most famous cured meats in the world.

For those that have yet to try it, Jamón has a rich, flavorful and slightly chewy quality.

It is somewhat akin to prosciutto but has a deeper flavor, perhaps on account of the longer curing time.

This is particularly true of Jamón Ibérico which has a curing time of anywhere from 2 years to 5 years.

Notably, there are two distinct variants of Jamón.

The first is Jamón Ibérico and the second is Jamón Serrano.

Although these are the most famous versions of the cured meat, there are several other regional varieties too.

Here is the typical nutrition profile for Jamón (8);

Key Point: Jamón is one of the most famous, widely-available and best-tasting cured meats in the world. If you like your meat fatty, then a type of salumi (Italian cold cut) called lardo is just what you are looking for.

Lardo is otherwise known as ‘Lardo di Colonnata’ and ‘Lardo di Arnad’ based on the regions which produce it.

Producers make lardo by curing strips of fatback (pork back fat) in salt and seasoning with various herbs and spices.

Interestingly, lardo is one of the oldest cured meats around, and historical accounts go back to the Roman times.

Lardo is pure fat, and restaurants traditionally serve it as an antipasto.

As the nutritional profile shows, lardo is exceptionally high in fat (9);

Key Point: As you might be able to tell from the name, Lardo is pure cured pork fat… and it tastes delicious. With a name that looks impossible to pronounce, ‘Nduja is a spreadable (and spicy) cured meat from Italy.

Renowned for its deep and intense flavor, this spicy cured meat is somewhat unique.

Specifically, it is spreadable, and it has a wide range of culinary uses.

For example, chefs use it as a dipping sauce, with bread, as a marinade for meat and even as a pasta sauce or pizza topping.

As ‘Nduja uses pork belly, it has a relatively high fat content which helps create the soft texture (10);

See this complete guide to ‘nduja for more information.

Key Point: ‘Nduja is a soft, spreadable type of cured meat with a delicious fatty and spicy flavor. Since it comes from the same part of the pig, Pancetta is very similar to bacon and pork belly in nutritional terms.

As with so many other cured meats, pancetta comes from nation of Italy.

It is possible that you have tried pancetta before – perhaps even without realizing.

For instance, we can often find it in pasta/pizza dishes, and it is sometimes sold alongside cheese.

Like any cured meat that uses pork belly, pancetta has a ‘fatty’ nutrition profile (11);

This complete guide to pancetta provides a more in-depth look.

Key Point: Pancetta is the bacon of cured meats. And it is delicious. Prosciutto is Italy’s answer to Jamón Ibérico, and they share many of the same qualities.

This thinly sliced dry-cured ham comes in several different varieties from the various Italian regions which produce it.

Typically, prosciutto will undergo a curing process that can last anything up to two years.

A good traditional version of the meat should only have two ingredients; pork and salt.

However, some cheaper varieties make use of nitrites as a preservative instead of salt.

Prosciutto has quite a mild taste, and it works well in a range of dishes, or just by itself on a cheese platter.

For a full guide to the origin, manufacture, and health aspects of prosciutto see here;

What is Prosciutto and is It Good or Bad For You?

You will also find information on how to make it at home if that appeals!

Key Point: Prosciutto is a thinly sliced Italian cured meat with a light and delicate flavor. It works well alongside cheese and a bit of fruit/wine. Pepperoni is a type of salami, and it is the only cured meat on this list to originate from outside of Europe.

For those that don’t know; pepperoni originates in the United States.

Although the origin isn’t fully known, it was an Italian-American idea that became popular before 1930 (12).

Pepperoni is very similar to varieties of salami from Italy. However, there are a few major differences;

Since it uses a combination of paprika and chilli, pepperoni has a very red and spicy appearance.

Notably, it is officially the most popular pizza topping in the United States.

The nutrition profile of pepperoni is very similar to other dry-cured sausages (13);

Key Point: Pepperoni is an American cured meat that enjoys huge popularity in its homeland and around the world. Here is one last Italian cured meat to finish; soppressata.

Soppressata is a kind of salami and the way to make it varies wildly from region to region.

Soppressata has a similar taste to other types of salami, but each regional variety is purported to have a unique flavor.

While the most popular varieties of soppressata usually use premium cuts of pork, some varieties follow the nose-to-tail mantra.

For example, Sopressata di Tuscany makes use of pig heads and tongues.

Here is the typical nutrition profile for soppressata (14);

Key Point: Soppressata is a popular and tasty variety of salami.

The twelve options in this article are just some of the cured meats that are available.

There are so many varieties, some of which have roots way back in ancient times.

Additionally, these meats all make a great combination on a cheese platter.

It is a perfect meal for when you don’t have much time, so next time you’re stuck for dinner ideas, try picking up a few types of cured meat.