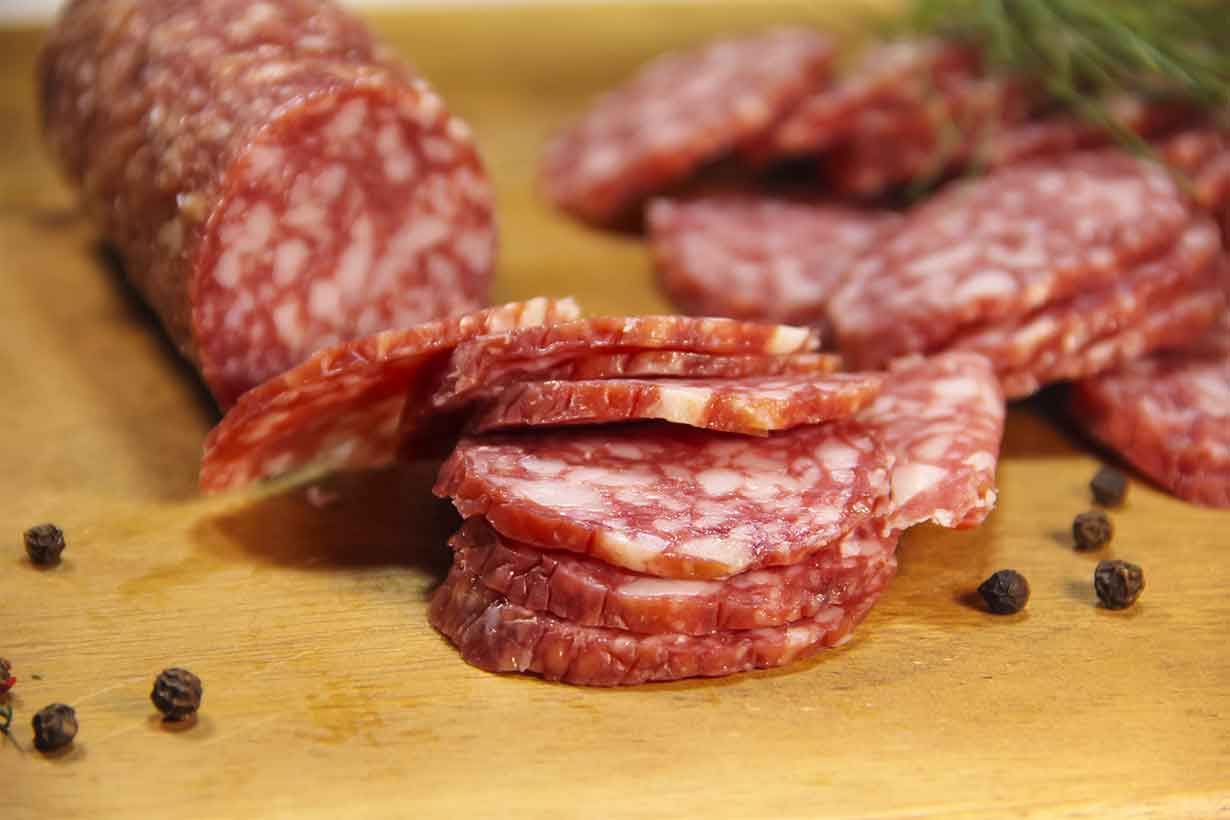 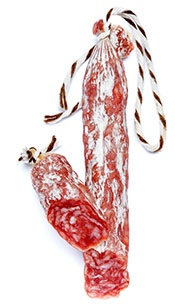 Salami is a traditional type of fermented meat hailing from the Mediterranean region of Southern Europe.

With thousands of years of history, this tasty delicacy is now famous throughout the world.

However, opinion is split on the relative health merits of this food.

While some claim it is traditional, healthy food, others claim that, as processed meat, we should avoid it.

This article takes a look at salami in more detail and examines the health claims.

What Is Salami Made Of?

Put simply; salami is a type of fermented sausage made by curing meat.

Pork is the most common ingredient, but salami may also contain beef.

Additionally, some manufacturers produce salami from other meats such as goose, veal and venison.

For this article, we will focus on the traditional pork salami.

To make salami, producers usually use a combination of the following ingredients;

Typically, salami makes use of starter bacterial strains such as lactobacillus, micrococcus and staphylococcus xylosus (1, 2).

Although using these starter cultures is not essential, they do help to kickstart the fermentation process.

Salami may contain any combination of the listed ingredients, or it might be only pork and salt.

How Is Salami Made?

To make salami, it must go through three phases;

During this stage, producers grind and mince the raw meat and then mix it with other ingredients such as salt and spices.

Once the salami mixture is ready, the producers place it into sausage skin casings.

Next, the salami sausages are set to hang in a warm and humid room for a few days. This stage allows for the growth of bacteria necessary for fermentation to occur.

After this warm fermenting stage, the salami moves to a cool but humid area where it can slowly dry.

During the fermentation, the bacteria create lactic acid which adds a sour note to the flavor, and due to the acidity, lactic acid helps to protect against pathogenic bacteria developing.

Following the fermentation and cooling stages, the salami undergoes a drying process.

Once dry, nitrates may be added to the salami as a preservative.

Alongside the removal of water (drying) and salt-curing, the use of nitrates is a way to help protect against the development of microbial bacteria, ensuring the salami is safe to eat in its “uncooked” state.

Although salami has not been cooked, it is not technically “raw,” and it is better to class it as a “cured” meat.

Key Point: Salami goes through a preparatory, fermentation and drying stage before it is ready.

Many people are curious regarding the differences between pepperoni and salami.

The simple truth is that pepperoni is one of many types of salami, and overall, there are dozens of different varieties.

For the most part, they are all relatively similar, and slight differences include how soft (or hard) the texture is and different spices and flavorings.

Here are some of the most popular kinds of salami;

While these are some of the most popular salami varieties, there are hundreds of different fermented sausages around the world.

When you buy salami, the packaging should clearly label which kind it is.

Key Point: Salami isn’t just one thing; there are hundreds of varieties around the world. Some of the most popular of these include Chorizo, Pepperoni and Soppressata.

Does salami have any nutritional benefits?

Perhaps surprising to some people, salami contains a moderate supply of nutrients.

The following tables show the nutritional profile of salami per 100 grams (3).

Since salami is mainly meat, it has a high protein content and provides 22.6 grams per 100 g.

The carbohydrate content will depend on whether the specific salami uses sugar in the seasoning mix or not.

Salami is a rich source of B vitamins; particularly vitamins B1 and B12.

As shown above, salami provides a wide range of essential minerals.

Similar to other fermented meats like prosciutto, salami is very high in sodium.

Selenium, zinc and phosphorus are also present in reasonable concentrations.

Key Point: Salami is low in carbs, high in protein and fat, and it contains a wide range of vitamins and minerals. 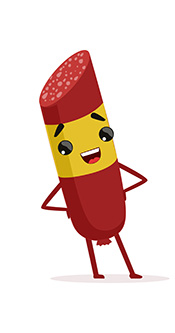 Like all food, salami has some benefits and drawbacks.

First of all, salami shares some benefits with fresh meat, and others are unique to the fermented sausage.

1. Major Source of B Vitamins

Salami is a significant source of nutrients in the B vitamin group.

B vitamins play an incredibly important role in the human body.

Meat is the single best source of these vitamins, and salami contains a significant concentration of them.

It may sound unusual for a high-salt content to be listed as a positive.

However, dietary sodium is a nutritional double-edged sword, and depending on the overall diet, an additional source of sodium could be helpful.

For one thing, studies show that excessive amounts of sodium can be harmful, but inadequate amounts can cause just as many problems (7, 8).

To put it another way; there is a good reason why sodium is an ‘essential’ mineral.

In fact, a recent meta-analysis even identified that insufficient salt intake might increase the risk of mortality (9).

For people who are eating a predominantly whole foods based diet, small amounts of salami could provide a useful dose of sodium.

Similar to how probiotic yogurts and kimchi contain beneficial bacteria, so too does salami.

During the fermentation process, large amounts of bacteria grow on the sausage – mainly around the casing.

This bacteria is not harmful to human health and is therefore known as ‘beneficial bacteria’.

Interestingly, microbial analysis of Italian traditional salami products demonstrates that these bacteria successfully transfer from the casing into the meat (10).

While there is little research on potential effects from these microbes, it is feasible that they may offer some benefit.

For instance, some research shows that lactic acid bacteria in fermented sausages can reduce nitrate concentrations (11, 12).

As we saw in the nutrition profile, salami has a relatively healthy range of nutrients.

While it won’t ever be the most nutritious food around, salami does provide a decent mix of protein, vitamins, and minerals.

Key Point: Salami is relatively nutrient-dense and it provides a decent source of important vitamins and minerals. 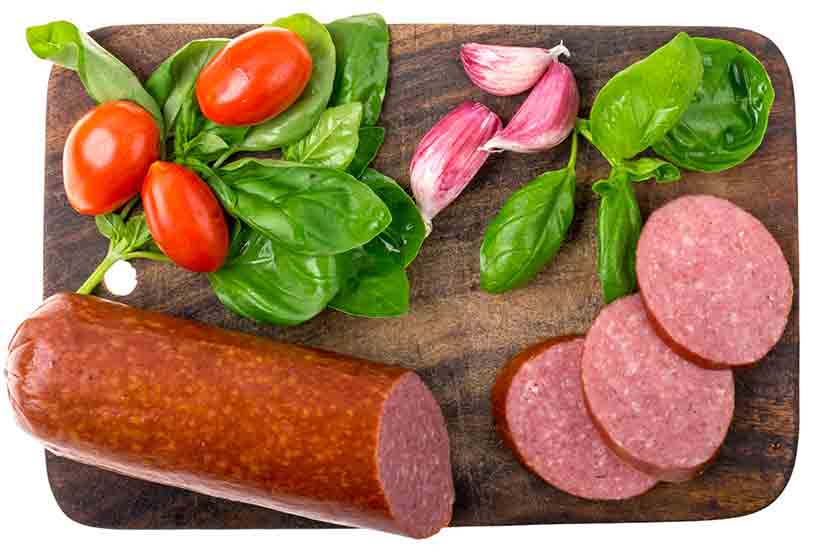 On the downside, there are also some health concerns regarding salami.

Mostly, these stem from the fact that salami is a type of processed meat which is very high in sodium.

Let’s look into these issues in a bit more detail.

Does processed meat cause cancer?

Well, yes – according to the official word at least.

In 2015, the World Health Organization (WHO) undertook an evaluation on the carcinogenicity of processed meats.

As part of this review, they examined epidemiological population studies and determined that processed meat was a group 1 carcinogen (13).

However, there are some issues with this.

Secondly, processed meat is a broad umbrella term that can mean many different things. Spam is processed meat. So is a hot dog in a bun that comes with a side of fries and cola. So is traditionally fermented meat like salami. Do all these foods have the same effect? Could the associations between processed meat and cancer be because processed meat often means fast food?

Thirdly, the reason for the associations between processed meat and cancer could be down to something we can call ‘healthy user bias.’ This phrase refers to the fact that people who adopt one supposed unhealthy behavior are more likely to embrace others.

For instance, people who eat more processed meat are also more likely to smoke, drink excessively, and exercise less. In this case, it is hard to isolate which behavior causes the higher risk.

While epidemiological studies find an association between processed meat and cancer, it is important not to overplay these associations and to understand the relative risk.

For instance, smoking is said to raise the lifetime risk of lung cancer by 2500%.

However, the associations found by the WHO identify processed meat as raising the lifetime risk of colon cancer by only 6%.

How Can We Reduce Health Risks From Processed Meat?

Suppose someone is worried about processed meat intake and believes that it does cause cancer.

In this case, how can we minimize our risk?

First of all, researchers believe that the use of nitrates and nitrites in processed meat is what makes it dangerous. For example, a recent meta-analysis shows that high consumption of these compounds appears to increase the risk of colon cancer (14).

As a result, the easiest way to reduce risk is not to consume salami that contains nitrates or nitrites.

Instead, opt for a traditional salt-cured salami which does not use chemical preservatives.

However…. Nitrosamine or Nitric Oxide?

An important point to consider is that nitrates and nitrites can be metabolized into two distinctly different compounds.

The first of these compounds is nitrosamine, which is possibly carcinogenic, and this is something we don’t want to happen.

The second is nitric oxide, which is beneficial for our body and, among other benefits, helps to lower blood pressure.

It is worth pointing out that vegetables are the number one source of dietary nitrate.

Numerous vegetables contain naturally-occurring nitrate, and this nitrate converts to nitric oxide in the body (15).

Given this, the logical question to ask is; why does nitrate in vegetables convert to nitric oxide, but nitrate in processed meats doesn’t?

Key Point: The simplest way to reduce potential risks from nitrosamine is to buy preservative-free, salt-cured salami. Otherwise, research suggests that not heating it and eating it alongside some vitamin C will inhibit nitrosamine. 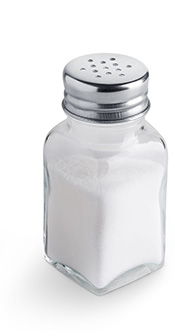 In the benefits section, we examined how the sodium content could potentially be a benefit.

However, salami does contain significant amounts of salt, and the science is quite clear that excessive salt consumption can cause harm, especially in salt-sensitive people (18).

If an individual is already consuming sufficient salt, adding large amounts of salami on top could be detrimental.

For example, anyone eating a diet of processed food is likely eating more than enough salt already.

Whenever we eat raw, cured or fermented foods, bacterial contamination can be a possible (but very rare) issue.

In recent years, there have been several cases of salami contaminated with foodborne pathogens such as salmonella (19, 20).

However, these occurrences are far from typical.

Additionally, it is unusual for salami that uses a lactobacillus starter to become contaminated.

Key Point: Salami is very high in salt, so moderation is advisable. Bacterial contamination is also a rare but not unheard of issue.

Is Salami Good or Bad For You?

All in all, salami is a tasty and traditional food that offers some health benefits.

It is also adaptable, and it tastes delicious whether on its own or as part of a cheese platter.

With a similar nutrition profile to pork, salami is a nutrient-dense option that provides a range of essential vitamins and minerals.

However, salami does have a few health concerns, mainly regarding the use of nitrates and (large amounts of) salt.

While fresh and unprocessed meat is the healthier option, eating salami from time to time is nothing to worry over.

After all, it would be a shame to avoid one of our most traditional foods over exaggerated health fears.

For more on traditional cured meats, see this guide to chorizo or this in-depth look at coppa.