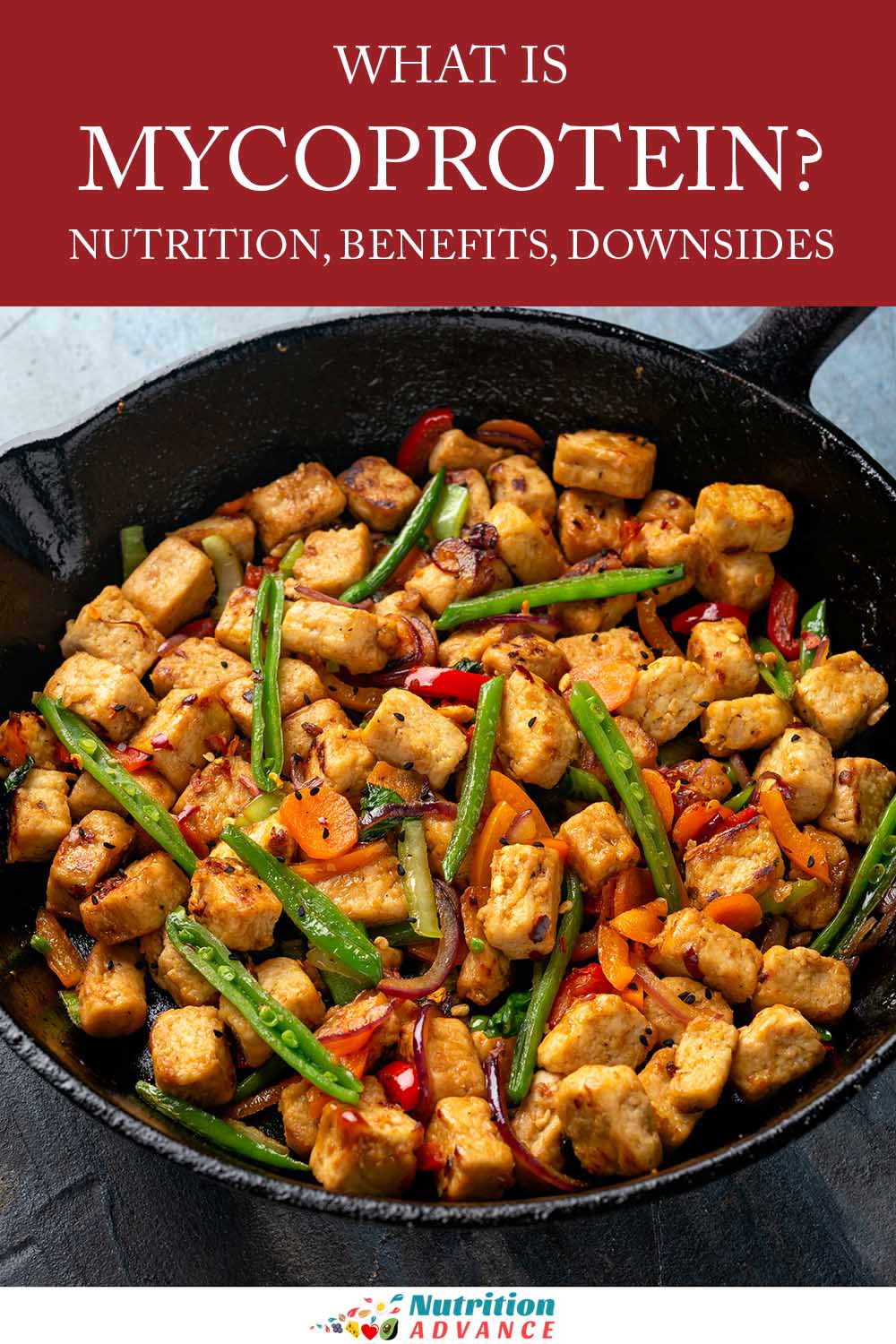 Mycoprotein is an interesting protein-rich food product that has increased in popularity over the past decade.

Although often categorized as a ‘plant-based protein,’ mycoprotein is technically a fungal protein.

This article takes an in-depth look at mycoprotein, its nutritional values, and its potential benefits and downsides.

Mycoprotein is a protein made through the fermentation of a microfungus called Fusarium venenatum using glucose (1).

Although mycoprotein is not from mushrooms, it is part of the wider fungus category, which also includes mushrooms.

Mycoprotein sells under the brand name ‘Quorn’ and first went on sale in the United Kingdom in 1985 (2).

Quorn is sold worldwide, including in the United States, by the company’s ‘Quorn USA’ arm.

Many Quorn products aim to replicate different animal products. For example, Quorn sells everything from ‘meatless grounds’ (also known as ‘vegetarian mince’) to ‘chicken style pieces,’ all based on mycoprotein.

So-called ‘meat alternatives’ have increased in popularity over recent years, but evaluating the respective nutritional properties of such products is essential. As we progress through this article, we will look at what mycoprotein offers nutritionally and identify any positive or negative points.

Key Point: Mycoprotein is a protein made from a fermented fungus called Fusarium venenatum sold under the brand name ‘Quorn.’

The following table shows the full nutritional values for several of the most popular mycoprotein products per 3.5 oz (100-gram) serving, including:

As shown in the nutritional values, mycoprotein products are relatively high in protein.

Additionally, 100 grams of the listed products provide more than 10% of the daily value for the following vitamins and minerals:

Key Point: Mycoprotein products are high in protein and fiber, and they provide a good range of vitamins and minerals.

Mycoprotein is the key ingredient in Quorn ‘products,’ but what other ingredients do these products contain?

The product is suitable for vegans.

The product is suitable for vegetarians but not for vegans.

The product is suitable for vegetarians but not for vegans.

Unlike the chicken pieces and ground meat Quorn products, the ‘meatball’ product contains a broader variety of ingredients. It has significantly less protein and more added ingredients in the form of flour and oil.

As shown, Quorn’s Meatless Patties’ have a long list of ingredients similar to what a regular chicken burger may contain.

This product is suitable for vegetarians but not for vegans.

Which Quorn Mycoprotein Products Are Best?

If a high amount of protein for relatively few calories is the goal, then products with the highest mycoprotein content are ideal.

In this context, ‘Quorn Pieces’ and ‘Quorn Grounds’ are superior to Quorn meatballs and patties.

Key Point: The ingredient profile of Quorn products can significantly vary. Some products are little more than mycoprotein, whereas others contain a range of flours, sugars, and oils.

Mycoprotein products have several potential benefits based on their nutritional profile and published scientific research.

Quorn products with a high percentage of mycoprotein provide a rich source of protein.

Furthermore, mycoprotein is a high-quality protein source with an estimated true digestibility of 86%. This gives mycoprotein a ‘protein digestibility corrected amino acid score’ (PDCAAS) of 0.99, which compares favorably to beef (0.92) and soy (0.91) proteins (10, 11).

PDCAAS is a score designed to evaluate protein quality, with a score of 1.0 being the highest possible score. Many plant proteins have an inferior score compared to mycoprotein, with kidney beans and lentils having a PDCAAS score of 0.549 and 0.628, respectively (12, 13).

In a 2021 randomized controlled trial, nineteen healthy older adults consumed 1.9 grams of protein per kilogram of body weight per day for three days (14).

Participants were split into two groups; one consumed an omnivorous diet, and the second ‘vegan’ group met their protein needs primarily through mycoprotein intake. Over the three days, tests showed no differences in protein synthesis rates between the two diets.

The amounts of each were leucine-matched to ensure they had the same amount of leucine, a critical amino acid for protein synthesis. This meant that the supplementary doses of protein from mycoprotein and milk proteins were 31.5 grams and 26.2 grams, respectively.

Based on blood and muscle samples taken before exercise and protein ingestion and four hours after, the results showed that the mycoprotein stimulated muscle protein synthesis rates at a higher level than the milk protein.

2) May Help To Decrease Food Intake

Based on the findings of a 2020 systematic review that reviewed five randomized controlled trials, the researchers noted that mycoprotein intake might lower subsequent energy intake (16).

The researchers noted that this might be due to mycoprotein’s combined protein and fiber content, which may help increase satiety levels.

Satiety refers to the feeling of being satisfied after a meal and a lack of desire to eat more.

However, the authors cautioned on the limited evidence currently available, as the review only covered five studies with a total of 122 participants.

Further research from more extensive trials is necessary to confirm the potential benefits of mycoprotein for lowering energy intake.

Twenty healthy adults were split into two groups; one consumed meat or fish daily for dinner (control), whereas the intervention group had mycoprotein.

However, there was a considerable difference in blood lipid results between the two groups.

While there was relatively little change in the control group, levels of low-density lipoprotein significantly decreased by 19.33% in the mycoprotein group (17).

These results back up previous studies that demonstrated significant decreases in LDL-C from mycoprotein-based interventions (18, 19).

Here is a summary of some of the potential drawbacks of mycoprotein products.

Not a Source of Vitamin B12

Vitamin B12 is an essential vitamin that plays a crucial role in human health.

Among its functions, B12 is vital for maintaining healthy blood cells, brain function, and making DNA (20).

Since many Quorn mycoprotein products position themselves as replacements for animal proteins like chicken or beef, it is essential to point out that mycoprotein is not a source of B12.

For this reason, it is vital to ensure that the diet has good sources of B12 elsewhere if using products like mycoprotein as a meat replacement.

In this context, taking a vitamin B12 supplement can be a safe and reliable way for vegans to obtain sufficient B12 (21).

For further information on this issue, see the following articles:

Key Point: Although often positioned as a meat substitute, Quorn does not provide a good source of vitamin B12.

Can Be High In Sodium

Salt is made up of equal parts sodium and chloride, also known as sodium chloride.

While sodium is an essential mineral, excessive intake (particularly when potassium is low) can increase blood pressure (22, 23, 24).

However, some Quorn mycoprotein products can contain relatively high levels of salt.

For example, Quorn ‘meatless meatballs’ contain 670 mg of sodium per 100 grams, equivalent to 29.2% of the recommended daily value.

If wishing to moderate salt intake, the more basic Quorn products such as ‘Quorn Grounds’ and ‘Quorn Pieces’ have a moderately low sodium content.

Key Point: Some Quorn mycoprotein products can contain high levels of salt. Check packaging labels carefully if this is a concern.

Several case studies and testimonials demonstrate that mycoprotein can cause allergic reactions in some individuals (25, 26, 27).

However, fortunately, these allergies appear to be relatively rare.

A 2019 review paper examined the extent of these reactions to mycoprotein, and some of the findings included (25):

Key Point: There may be rare occurrences of sensitivity/allergy to mycoprotein products. However, the available scientific literature suggests that mycoprotein allergy is extremely rare.

Here are the answers to some commonly asked questions about mycoprotein.

Technically, mycoprotein belongs to the fungi category rather than plants. However, it is often referred to as a ‘plant-based protein’ since it contains no animal products.

Is mycoprotein suitable for vegans?

How does mycoprotein compare to meat?

Mycoprotein offers a similar amount of protein per calorie to lean meats and provides a reasonable range of vitamins and minerals. However, mycoprotein products are a poor source of several nutrients commonly found in meat, such as iron, zinc, and vitamin B12. Therefore, if using mycoprotein as an alternative to meat, it is important to ensure these critical nutrients are obtained elsewhere in the diet.

Are Quorn products suitable for vegetarians?

All Quorn products are vegetarian, but not all are suitable for vegans.

Products containing a high proportion of mycoprotein tend to offer a good source of protein and fiber for relatively few calories.

Additionally, these products provide a moderate amount of numerous vitamins and minerals.

However, it is worth remembering that some mycoprotein products can contain relatively small amounts of mycoprotein and numerous other ingredients, such as flour and oils.