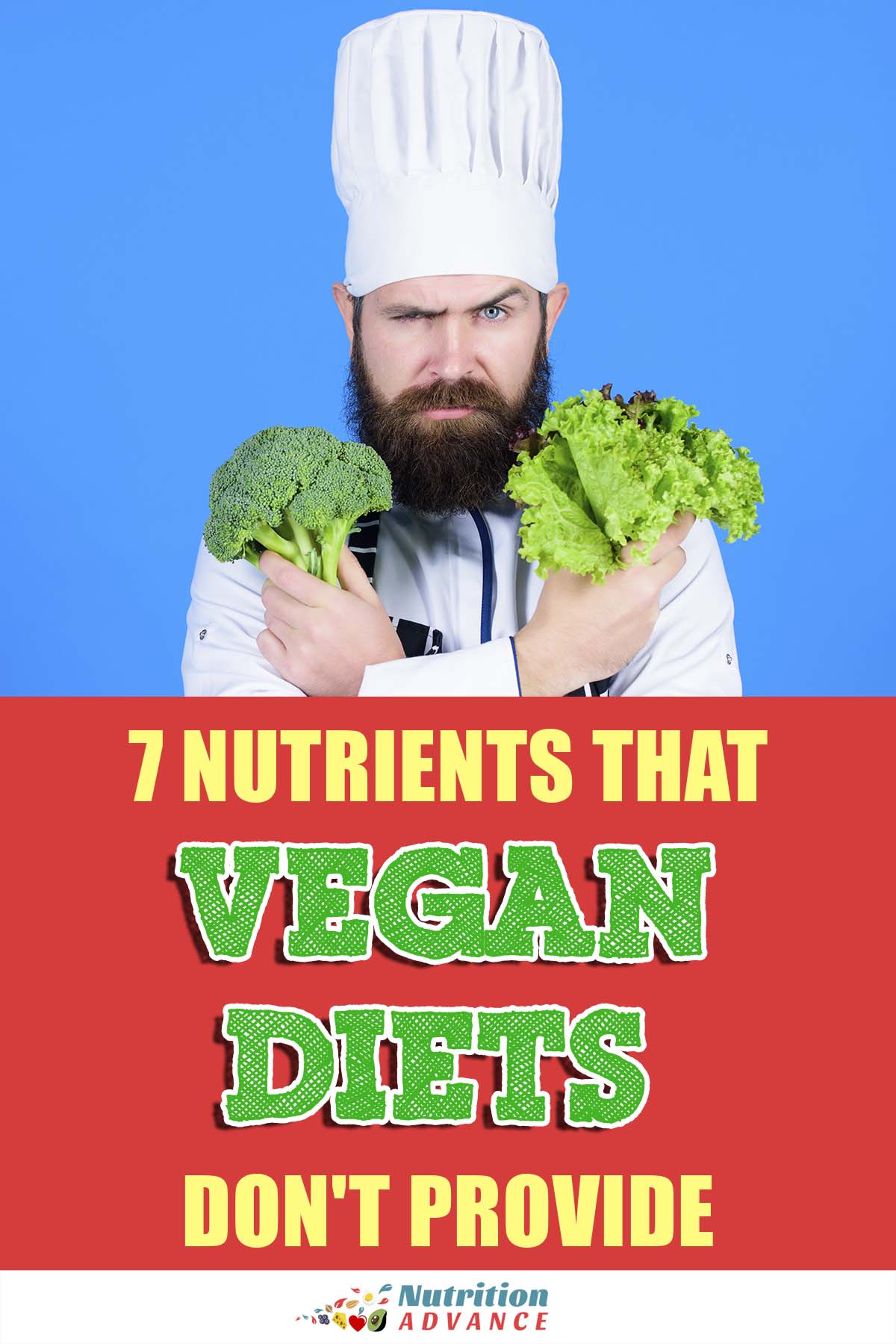 It is clear that well-formulated vegan plant-based diets can be a healthy choice of diet.

However, there are potential nutrients of concern for people following the diet, and it is important to be aware of these.

Firstly, animal-based foods contain some unique nutrients not found elsewhere. We must consider what happens when we remove these foods from the diet and whether we need to replace them.

In this article, we examine some specific nutrients that vegan diets don’t provide, whether these nutrients are essential, and how we can obtain them on a vegan diet.

Vitamin B12, otherwise known as cobalamin, is an essential water-soluble vitamin with a wide range of important functions.

Among these functions, vitamin B12 is vital for forming and maintaining healthy red blood cells and energy metabolism (1).

Furthermore, a chronic vitamin B12 deficiency may potentially lead to adverse health conditions including but not limited to (2, 3, 4);

We can only naturally find this vitamin in animal foods such as meat, eggs, fish, and other seafood.

Is Vitamin B12 Essential?

Yes, vitamin B12 is essential for human health, and it is vital to ensure an adequate intake when following a vegan diet.

However, research shows that the average depletion and deficiency rates for vitamin B12 among vegetarian dieters are (5);

The research also shows that these deficiency rates are higher in vegans.

Can Vegan Diets Provide Vitamin B12?

Vegans may get vitamin B12 from two sources:

Out of these two choices, a supplement is the safer (more guaranteed) source if not meticulously tracking food/nutrient intake.

Note: This is not an “optimal” choice – it is an essential one. If following a vegan diet, it is important to ensure a sufficient intake of vitamin B12.

The amount you need each day, stratified by sex and age, can be found here.

Key Point: Vitamin B12 is an essential nutrient that vegans need to supplement or obtain from fortified foods.

Vitamin A is an essential fat-soluble vitamin that is available in two forms – retinol and provitamin A carotenoids. This important nutrient plays a key role in immune health and red blood cell production (6).

Retinol, found in animal foods, is pre-formed vitamin A in its active state. Without going into extensive detail, this simply means that the body can use it in its current form without relying on any conversion.

When we consume carotenoids, the body needs to convert them to retinol in the intestines, but the conversation rates can be quite poor (7).

In other words: retinol is a more effective source of vitamin A gram-for-gram.

The Difference In Vitamin A Bioavailability

To make the difference more clear between retinol and beta-carotene, the Food and Nutrition Board at the Institute of Medicine of the National Academies created a new way to measure vitamin A in food called ‘retinol activity equivalents’ (RAE) (8).

This measurement helps individuals to better understand the relative bioavailability of vitamin A from different sources.

According to the measurement system, the difference between the carotenoid beta-carotene and retinol is (8);

According to the retinol activity equivalents system, retinol is approximately 6x more bioavailable than beta-carotene as a source of vitamin A.

However, this is not a significant issue for vegans who consume carotenoid-rich plant foods.

The reason for this is because foods like carrots and sweet potatoes contain such substantial amounts of carotenoids that the difference in bioavailability is less of a concern.

Is Vitamin A (As Retinol) Essential?

Vitamin A is an essential nutrient, but we can get it from retinol or carotenoids.

Pre-formed retinol is not essential.

Can Vegan Diets Provide Vitamin A?

The recommended daily value for vitamin A is 900 mcg RAE (retinol activity equivalents).

Here are some vegan foods that provide significant amounts of retinol activity equivalents:

Thus, if an individual following a vegan diet eats enough carotenoid-rich plant foods, vitamin A should not be a nutrient of concern.

Tip: consuming carotenoids alongside a source of fat increases the absorption rate.

Key Point: Retinol is preformed vitamin A and we can find it in animal foods. Retinol is the most bioavailable source of vitamin A, but this should not be an issue if vegans consume enough carotenoid-rich foods.

Vitamin D is more than just a vitamin, and it is a hormone that plays a significant role in the immune system (13).

This vitamin also regulates the amount of calcium in our blood, thereby having an important influence on bone health (14).

Vitamin D is an essential vitamin that we need to obtain in sufficient quantities.

On this note, low blood levels of vitamin D may potentially increase the risk of depression, bone loss, and a variety of chronic diseases (15).

Vitamin D3 is only available from animal foods such as eggs, oily fish, and organ meats (16).

However, it is possible to get vitamin D on vegan diets from foods such as UV-exposed mushrooms (vitamin D2) and fortified foods.

For vegans (and omnivores) who live in cold and dark places over winter, it may be worth considering a vitamin D supplement.

Key Point: Vitamin D3 is only found in animal foods, but a variety of vegan-friendly fortified foods contain vitamin D2. For vegans who don’t spend much time in the sun, it might be worth supplementing vitamin D.

Among its various roles, creatine provides energy for muscular contraction. It is a compound that we can only find in animal foods such as red meat, poultry, and fish (17).

However, the human body can synthesize and produce its own creatine through the amino acids glycine, arginine, and methionine. As a result, we do not need to obtain it from dietary sources (18).

Creatine is not essential, and a lower dietary intake of creatine does not appear to be a significant health concern.

Since vegan diets restrict the consumption of all animal foods, they cannot provide dietary creatine.

For this reason, vegan dieters who are serious about sports performance may wish to consider creatine supplementation as well as ensuring sufficient protein intake.

However, it is not a necessary consideration for general health.

For more on creatine, there is a good review of its potential benefits here.

Key Point: Vegan diets supply no dietary creatine, so supplementation could be worth considering to improve sports performance.

Iron is an essential mineral involved in forming hemoglobin and oxygen transportation (21).

There are two different forms of dietary iron, and these are;

Researchers estimate the bioavailability of iron from omnivore diets is around 14-18%. However, for vegetarian diets, this falls to 5-12% (22).

For this reason, the reference daily intake (RDI) for iron in vegans is 1.8x higher than for people consuming a diet including animal foods (23).

No, heme iron is not essential, and we can get iron from non-heme plant-based sources.

However, it is possible to maintain regular iron stores providing the diet contains enough non-heme iron.

Some of the richest food sources of non-heme iron include:

Key Point: Heme iron is the most bioavailable form of iron, and it is not available from plant foods. This should not be an issue providing vegans consume iron-rich plant foods.

Taurine is an important amino acid found in the human body.

We do not require taurine from the diet because the human body can produce it naturally from the amino acids cysteine and methionine (24).

However, despite dietary intake not being essential, there may be benefits from it. On this note, randomized controlled trials show that taurine supplementation can reduce blood pressure and lower markers of cardiovascular risk (25).

Since taurine does not occur in plants, vegan diets do not provide it. Further, vegans appear to have lower blood levels of taurine than omnivores do (26).

Taurine is not essential, and we do not require it from our diet.

However, a higher dietary intake may potentially have benefits.

No, vegan diets do not provide taurine, which is only available from animal foods.

It is not an essential dietary nutrient, but future research may help to ascertain whether it is an ‘optimal’ one.

The average taurine intake on an omnivore diet is thought to lay between 40 mg and 400 mg per day (27).

For this reason, it is a compound that may be worthy of supplementing.

Key Point: Vegan diets don’t provide taurine. It isn’t necessary to consume it from dietary sources, but doing so might be beneficial.

Carnosine is a dipeptide molecule formed by two amino acids: alanine and histidine (28).

Once again, our body can produce this compound, so it is not essential that we get it from our diet.

However, there is evidence that consuming it from our diet may have benefits. For instance, a recent systematic review on carnosine suggested that the compound has anti-glycating properties. In other words, it may help to reduce the formation of AGES (advanced glycation end products) in the body (29).

That said, most of the included studies in this systematic review were cell and animal-based studies, and more studies in humans are necessary to better investigate this.

No, it is not essential that we consume pre-formed carnosine as part of our diet.

However, doing so may potentially have benefits.

Vegan diets do not provide carnosine, which is only found in animal foods.

There is not a substantial amount of research available on this compound, but research shows vegetarians have a 26% lower blood concentration of carnosine than omnivores do (31).

Again, carnosine supplementation could change this, but it isn’t thought to be an “essential” supplement for vegan diets.

Key Point: Vegans have lower plasma levels of carnosine, a compound found in animal foods which may have potential benefits.

Docosahexaenoic acid (DHA) and eicosapentaenoic acid (EPA) are the active and most bioavailable forms of omega-3. These fatty acids are mainly found within seafood, particularly oily fish like salmon, sardines, and tuna (32).

The bioavailability of DHA and EPA is significantly higher than from alpha-linoleic acid (ALA), another form of omega-3 that we can find in plant-based foods such as seeds, nuts, and vegetables (32).

Recent research has demonstrated that DHA and EPA appear to have clear beneficial effects:

Based on the results from large observational studies, a higher omega-3 index is strongly associated with a reduced risk of coronary heart disease mortality (38).

Are DHA and EPA Essential?

It is not essential to consume DHA and EPA, but the scientific research on these fatty acids strongly suggests they are beneficial for human health.

The intake of DHA and EPA on a vegan diet is possible from supplementation.

Algae is a natural source of DHA and EPA, and algae-based supplements are available that can supply these fatty acids in a vegan-friendly way.

A variety of these supplements can be found here (disclosure: affiliate link)

Key Point: Vegan diets do not provide DHA and EPA omega-3s, which appear to be beneficial for human health. However, it is possible to buy vegan-friendly supplements that supply both of these fatty acids.

As always, nutrient-dense whole foods should be the main focus of healthy dietary patterns. This is the case whether the diet follows an omnivore, vegetarian, vegan, or any other dietary pattern.

However, as shown in this article, there are several nutrients and potentially beneficial compounds that vegan diets don’t provide.

For people who have decided to try a vegan diet, it is important to ensure sufficient intake of vitamin B12, which is an essential nutrient. The other nutrients mentioned may also be worth considering when planning the diet.

This guide to the best vegan-friendly source for all nutrients may help in this regard.

Lastly, it is also worth noting that plant-based meat products, such as the Awesome Burger, are not necessarily nutrient-matched meat substitutes, and this should be considered when making dietary changes.