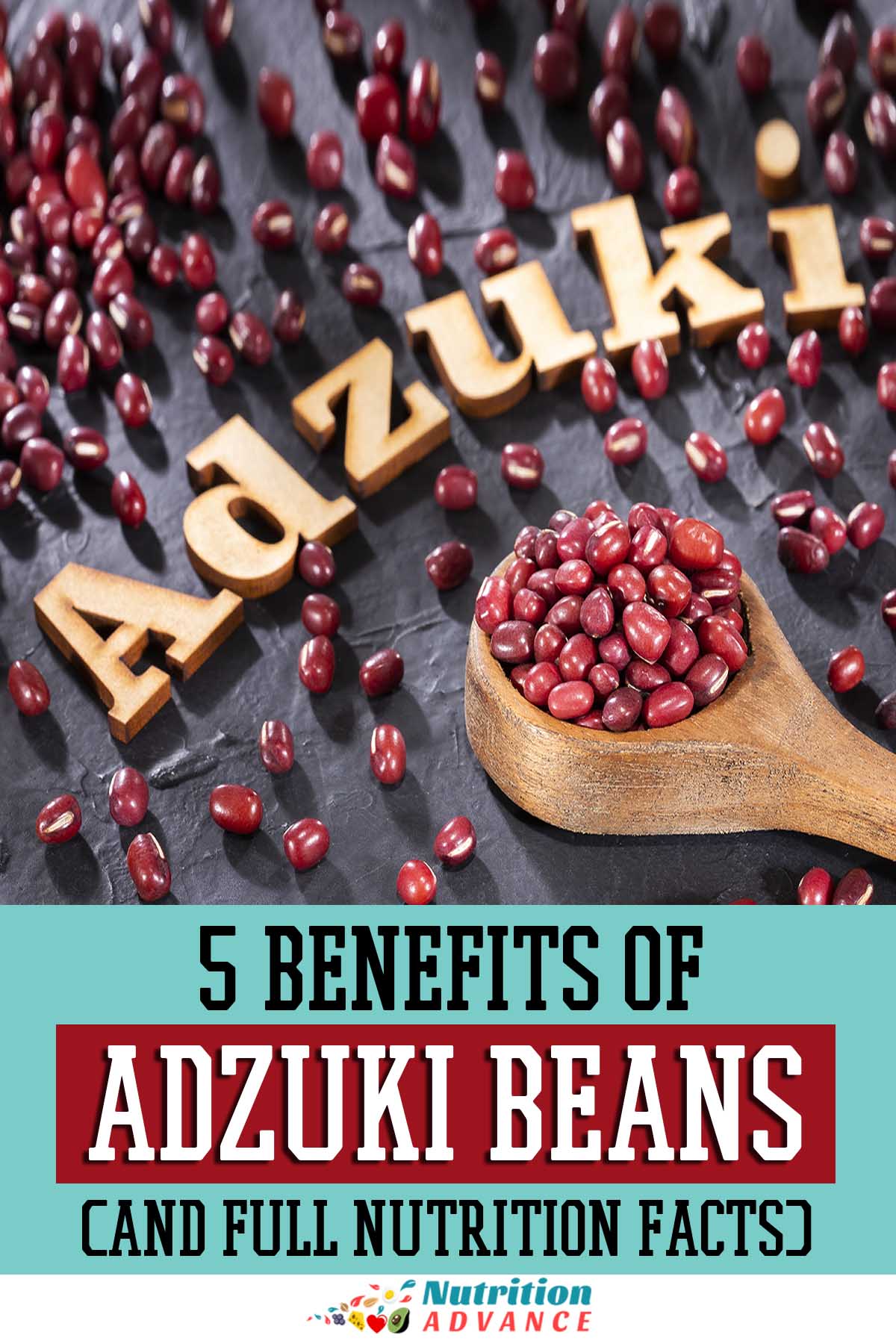 Adzuki beans are not as well known as other popular legumes such as soybeans and kidney beans.

However, these little red-colored beans offer excellent nutritional value, and they offer a few potential benefits too.

This article examines what adzuki beans are, their research-proven benefits, and their full nutritional values.

What Are Adzuki Beans?

These beans take their English name from their Japanese term ‘Azuki,’ and they play a prominent role in East Asian cuisine (2).

One reason for this is because they predominantly grow in East Asia (particularly China, Japan, and Korea).

Adzuki beans are also popular in India, with widespread distribution in the Himalayas. They also grow around the world, including in the United States (3).

The beans feature in savory and sweet dishes worldwide, and they may sometimes be referred to as ‘red beans.’

As shown in the image, adzuki beans are small red beans with a little white ridge on one side.

Although some people may initially presume they look like red kidney beans, the two are fairly different in shape and size. Adzuki beans are much smaller, approximately half the size, and they do not share the renowned ‘kidney-shaped’ appearance with kidney beans. They are similar in size (and have similar nutritional properties) to mung beans and cannellini beans.

Due to their high fiber content, adzuki beans have a somewhat firm and chewy texture.

As for their flavor, the beans have a slight nutty characteristic, and they are mild and less bitter than most beans.

Perhaps, for this reason, adzuki beans are the key ingredient in ‘red bean paste,’ which features in many dessert recipes.

Key Point: Adzuki beans are high-fiber legumes that grow around the world. However, they’re prevalent in East Asia and Himalayan nations, the two main cultivation areas.

Adzuki Beans Are a Rich Source of Protein

One of the main nutritional benefits of adzuki beans is their protein density. On this note, a cup serving of cooked adzuki beans provides 17.3 grams of protein (4).

This protein content places the beans relatively high among the best plant-based sources of protein.

Key Point: Adzuki beans offer a good amount of protein, and they are 17% protein by weight.

One of these studies was a randomized controlled trial that featured fifty participants with moderately high LDL-C levels (6).

LDL-C stands for ‘low-density lipoprotein’ cholesterol, but it is often simply referred to as “bad cholesterol” in the media. This is because high LDL-C levels are an established risk factor for cardiovascular disease (7).

In the study, the researchers split the fifty participants into two groups: one given a daily dose of polyphenol-rich adzuki bean extract, and one given placebo. The study lasted for eight weeks, and at the end of the study, blood lipids (cholesterol levels) were examined for each participant.

It is also worth noting that the high-polyphenol adzuki extracts used within this study contained 42.2 mg of polyphenols. In contrast, raw adzuki beans provide 8970 mg of polyphenols per 100 grams (9).

This study gave thirty-nine student participants either ‘adzuki juice’ or a placebo drink. At the end of the study, the adzuki juice group had significantly reduced triglyceride levels than the placebo group (10).

It is also worth noting that adzuki beans are a rich source of dietary fiber, which may influence cardiovascular health. A cup serving of cooked beans provides 17 grams of fiber (13).

Key Point: Research on adzuki beans demonstrates that they may improve several markers of cardiovascular risk.

May Have Benefits For People With Type 2 Diabetes

For people with type 2 diabetes, opting for low-glycemic foods can help to regulate blood sugar levels (20).

However, a recent randomized controlled trial compared the effect of grains deemed to be ‘low-glycemic’ (wheat bran, buckwheat, oats) with ‘convenience foods’ made from adzuki beans (21).

Fiber-rich carbohydrate sources, such as adzuki beans, are also more beneficial for blood sugar control than refined carbohydrates like white rice and pasta (23).

Packed With Vitamins and Minerals

Besides their protein and fiber content, adzuki beans are also a significant source of essential nutrients.

These beans contain some level of almost every vitamin and mineral.

Among these, they offer exceptional amounts of copper, folate, magnesium, manganese, phosphorus, and potassium.

Key Point: Adzuki beans contain a wide range of vitamins and minerals, some of which are present in particularly high amounts.

As previously mentioned, adzuki beans are a concentrated source of polyphenols. The beans are particularly high in flavonoids, such as proanthocyanidins, but they also contain saponins (9, 25, 26).

Similar to other high-polyphenol beans like black turtle beans, many of these polyphenols are located in the dark outer coat of the beans.

Studies using cell lines and mice have shown that these adzuki compounds may have beneficial effects against obesity and anti-cancer activity (25, 26).

However, there is very little relevant research from human trials in this area. Furthermore, findings from cell line and animal studies in no way indicate that the same effect would be seen in human trials.

Although polyphenols seem to have some benefits for human health, the evidence in the mechanisms for how are not clearly understood (27).

Research on phytonutrients and bioactive compounds in food is in its relative infancy, and further research is necessary to understand this area better.

Now that we’ve looked at some of the benefits of adzuki beans, here is their full nutritional profile. The following table shows the nutritional values of cooked adzuki beans per 3.5 oz (100-gram) serving.

The data source is the USDA’s FoodData Central database, and the daily values have been calculated using the FDA’s published daily values (4, 28).

Here are the various vitamins and minerals that cooked adzuki beans provide per 3.5 oz (100-gram) serving (4, 28).

How To Prepare Adzuki Beans

Soaking beans is often recommended to reduce the cooking time and lower levels of active lectins such as phytohaemagglutinin, as found in red kidney beans (29).

That said, pre-soaking the beans for a few hours can reduce the cooking time from roughly 90 minutes to less than an hour.

To cook adzuki beans, all you need to know is to put them in a pan with water, bring to a boil, and then let them cook until they’re soft enough to eat.

For those short on time, canned adzuki beans are the simplest and most convenient way to consume the beans. Such canned options have been pre-cooked, so they just need reheating in a pan.

Like other foods in the legume family, adzuki beans are very versatile and can be used in many ways.

It may be possible to find adzuki beans for sale in large grocery stores.

If not, any local Asian market/store will likely stock them. Additionally, it should be easy to find them available for delivery from various online stores.

For instance, Amazon has a wide range of adzuki products for sale (disclosure: affiliate link).

They’re a good source of protein, fiber, vitamins, and minerals. The beans are also a rich source of polyphenols, which may provide extra benefits.

For individuals seeking plant-based proteins, or for those looking to increase their protein and fiber intake simultaneously, adzuki beans may have a lot to offer.