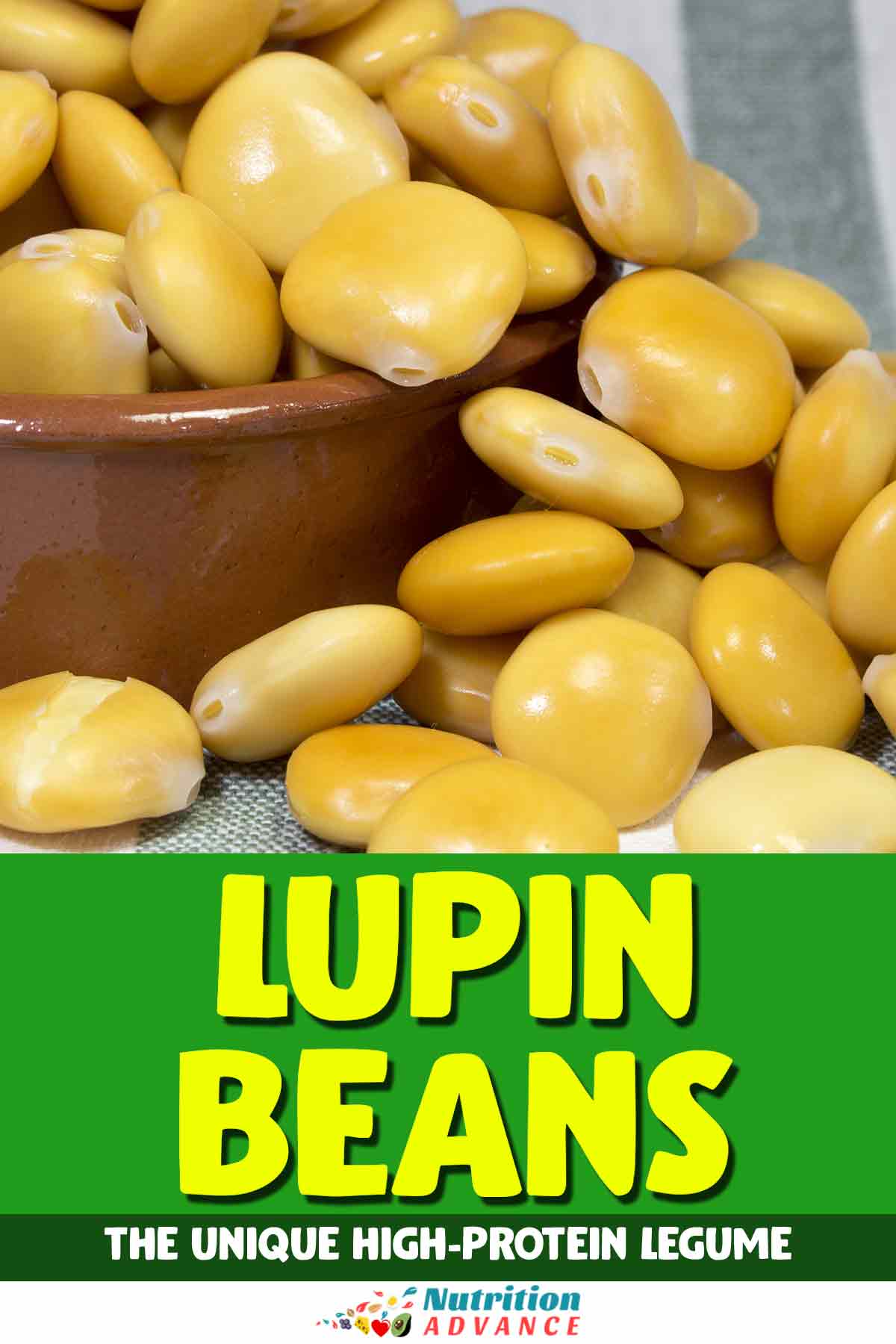 Lupin beans are unique among legumes for their high protein and low carbohydrate content.

However, most people are not as familiar with these beans as other legumes such as soybean and kidney beans.

In this article, we take an in-depth look at the nutritional benefits of lupin beans.

We’ll also examine their potential benefits, drawbacks, and how to use them.

What Are Lupin Beans? 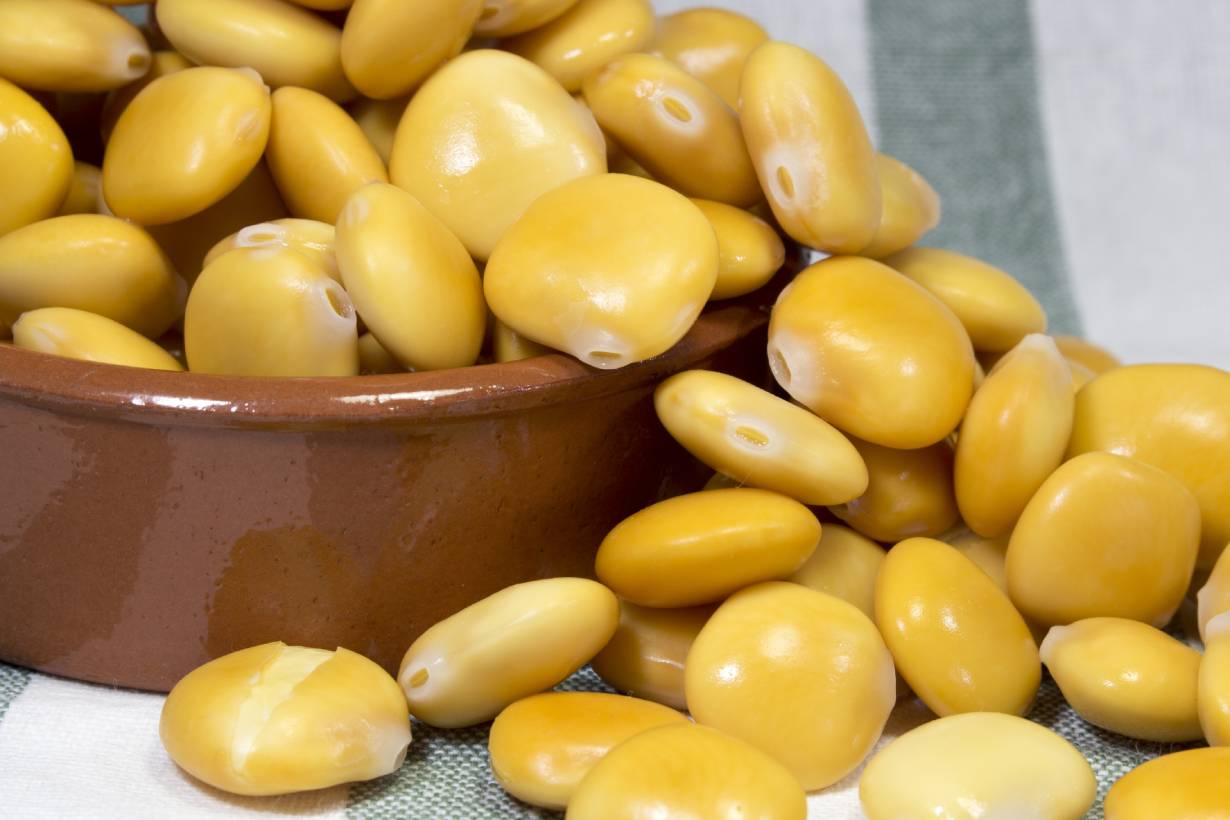 Plants in the lupinus genus of plants produce lupin beans, which are a small legume with yellow skin (1).

Lupin beans (sometimes known as ‘lupini beans’) have an interesting history, and they were part of the diet of the Ancient Egyptians and the Romans. It is thought that lupin beans have been cultivated as far back as 2000 BC (2).

Compared to other legumes, these beans contain much higher amounts of protein and fewer carbohydrates. Their unique point in this regard is that they contain almost no starch.

Despite this, most of the carbohydrates that lupin beans contain are fibrous carbohydrates, and the beans are considered a rich source of fiber.

The primary difference here is that lupin beans can either be sweet or bitter.

The bitter varieties contain various quinolizidine alkaloids that are mildly poisonous, including (3):

These bitter lupins mainly grow on a plant called Lupinus albus, which mainly primarily grows in the Mediterranean region (4).

In contrast, sweet lupins are produced by a domesticated version of a plant called Lupus angustifolius, which grows in Australia (5).

It is possible to eat bitter lupins, but they must first be soaked in salted water to remove the alkaloids they contain. Removing the alkaloids also eliminates their bitter flavor.

However, most of the world’s commercial lupin bean production (around 80%) comes from Australia and focuses on sweet lupin beans (6).

Key Point: Lupin beans are legumes that provide high amounts of protein and fiber, and they have been part of human diets for thousands of years.

Based on data from the USDA’s FoodData Central database, here are the nutritional values per cup (166 grams) of cooked lupin beans (7).

As shown in the above values, lupin beans are an excellent source of vitamins and minerals, particularly manganese, copper, and folate.

In addition to the essential nutrient content of lupin beans, they also provide a range of polyphenols, including flavonoids and phenolic acids such as (9):

Key Point: Lupin beans are low in fat, high in protein, and they contain a good range of nutrients.

Lupin Beans Are Lower In Calories Than Other Legumes

Since lupin beans contain very little starch, they have a low carbohydrate (and thus calorie) content.

This may suit people trying to lower either the amount of carbohydrates or overall calories they consume.

To illustrate this point, a cup serving of lupin beans has only 198 calories in total (7)

As previously mentioned, lupin beans are a high-protein legume with nearly 26 grams of protein per cup serving (7).

Interestingly, the group supplementing with lupin protein saw their low-density lipoprotein (LDL) levels fall by approximately 4% over a 28-day period.

For this reason, the researchers concluded that the high arginine content of lupin protein might be responsible for some of the effects.

Key Point: Lupin beans are among the best plant-based sources of protein. Additionally, the protein they contain may potentially have a beneficial impact on markers of cardiovascular health.

As lupin beans contain a small amount of carbohydrate (and much of this is fiber), they have a low glycemic index. The glycemic index (GI) predicts how individual foods can raise blood sugar levels.

Combined with glycemic load (calculated by multiplying the GI by total grams of carbohydrate and then dividing by 100), it can help estimate the blood sugar response to a meal (13).

While no specific studies show the GI of lupin beans, there have been studies looking at what happens to other foods with the addition of lupin flour.

For example, in one study, replacing 10% of the total ingredients used to make white bread with lupin bean flour led to significant reductions in the finished bread’s glycemic index.

Furthermore, whole lupin beans should have a lower glycemic index (and glycemic load) than other grains and legumes.

Key Point: Due to their high protein and fiber content, lupin beans have a low glycemic index. Adding them to a meal containing other carbohydrate-based foods should reduce the total glycemic index/load.

Despite the nutritional benefits of lupin beans, there are also some concerns to be aware of.

As mentioned earlier in the article, bitter lupin beans contain high concentrations of several quinolizidine alkaloids that are mildly toxic.

That said, if bitter lupins are not correctly soaked to reduce their alkaloid content, consuming them can have some potential side effects.

There is a study comparing the effectiveness of the various ‘debittering methods’ when preparing lupin beans here.

The EFSA’s final report noted that intoxication with unprepared bitter lupin seeds could have various neurological, digestive, and cardiovascular effects. However, intoxication is infrequent and rarely leads to life-threatening conditions.

This is because bitter lupins are usually prepared and packaged for sale in a jar as pickled lupins.

However, the EFSA did note that there needs to be more research on the consumption of lupin products.

Once again, these toxicity issues are not a concern with the sweet lupin variety of beans, which is the main commercial variety found for sale.

If preparing lupins seems too time-consuming, it may be better to opt for a different legume such as mung beans or soybeans. While slightly different from lupins nutritionally, both these legumes provide a good range of protein, fiber, vitamins, and minerals.

As a legume variety that belongs to the same wider family as peanuts, lupin bean allergy is a potential concern.

In a prospective study of 5,366 people, the cross-reactivity rate with lupin beans for patients with a peanut allergy was 17.1% (16).

A further study in this area demonstrated that among forty-seven children with peanut allergy, sixteen were sensitive to lupin when given a skin-prick test. Among these sixteen children, nine opted to consume a sample of lupin bean when asked. Two out of the nine developed clear symptoms of allergy, including an itchy mouth and a 20% fall in peak expiratory flow rate (17).

Key Point: Consumption of improperly prepared bitter lupins and a low (but significant) risk of allergy are two potential concerns regarding lupin beans.

How To Use Lupin Beans

Lupin beans can be used in many different ways depending on the type of lupin product purchased.

People can consume lupin beans in the same way as most other legumes. Some potential ways of using this legume include:

Pickled lupin beans are preserved in salted water and come in glass jars.

In this form, people generally eat lupin beans as a snack or mix them with some other snack-like foods such as olives.

Lupin flour is a low-carb, protein and fiber-rich flour used for baking. It is made from the sweet variety of lupin beans.

There are plenty of ideas on how to use it online, and a simple search should bring up various recipes.

Lupin beans offer an interesting nutritional profile, and they are an excellent way to get some extra protein into the diet.

They are also lower in carbohydrates and calories than most other legumes, which may appeal to some people.

While there are some concerns about improperly prepared bitter lupins, these can be avoided by opting for the Australian sweet lupin beans, which are the most prevalent variety of the legume.

The Benefits of Adzuki Beans (and Full Nutrition Facts)