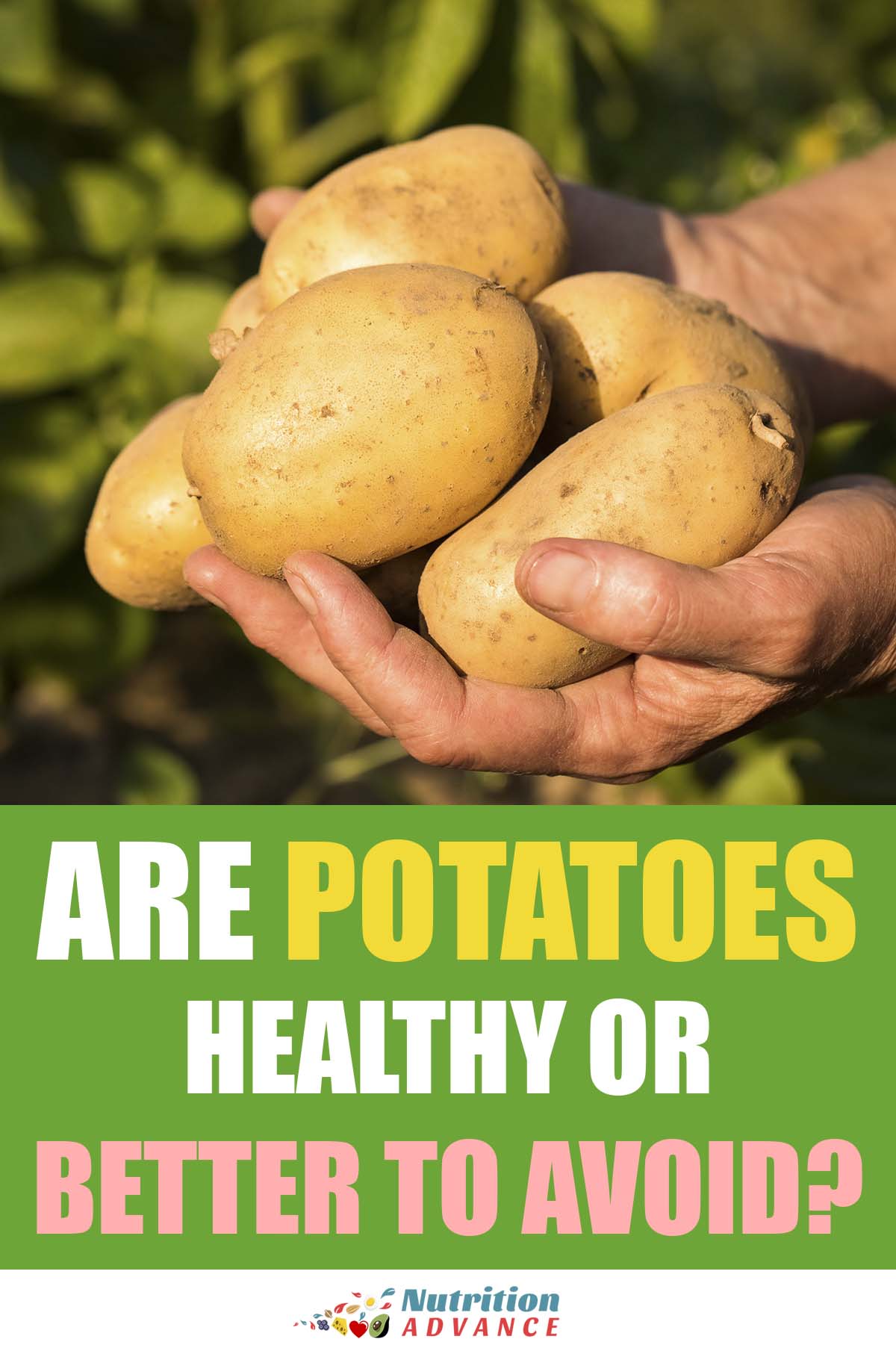 Potatoes are a popular type of vegetable and they are among the most significant staple foods in the world.

However, their health benefits have come into question over recent years, mostly due to negative coverage of “starchy foods” in the media.

In this article, we will examine the nutritional values, potential benefits, and possible downsides of potatoes.

Are they a nutritious option? 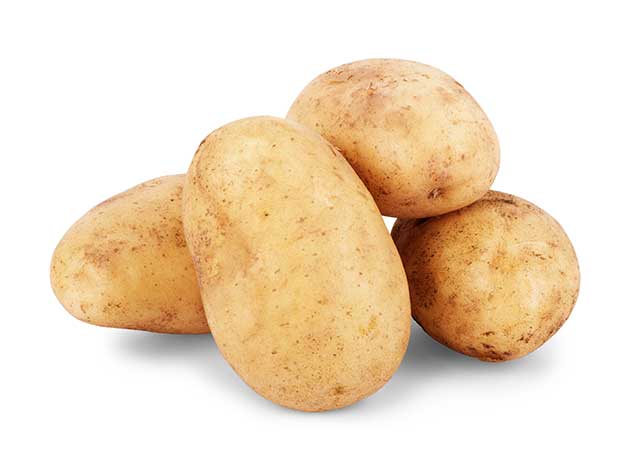 Botanically, potatoes are a tuber.

Tubers are an underground storage organ that forms at the bottom of stems from plants. Their primary function is to provide nutrients and energy so that the plant can grow.

They belong to the nightshade family of plants alongside bell peppers, eggplant, and tomatoes.

Culturally, potatoes have been an important source of food for centuries.

Interestingly, researchers recently found that the first domestication of potatoes occurred between 8,000 and 10,000 years ago (2).

Unlike most vegetables, which can be consumed either raw or cooked, raw potatoes can be difficult to digest and are thus almost always cooked.

According to an analytical report by Helgi Analytics, potato consumption per capita was 22.6 kg in 2013 (3).

There is also a wide variety of different potato varieties that grow around the world, and potatoes come in all shapes and sizes.

Key Point: Potatoes are an underground tuber that enjoys popularity around the world.

Potatoes Are a Good Source of Nutrients

Among the various nutrients they contain, potatoes offer particularly high concentrations of potassium and vitamin C.

According to the USDA’s FoodData Central database, here are the full nutritional values for a medium-sized (202-gram) cooked potato, including skin and flesh (8).

Potatoes, Carbohydrate, and the Glycemic Index

One of the common claims against potatoes is that they are high in carbohydrates, low in fiber, and thus have a relatively high glycemic index.

But is that true?

Per 100 grams, the table below shows how potatoes compare to other carbohydrate foods for total carbohydrate content and glycemic index rating (8, 9, 10, 11, 12, 13);

As shown, gram-for-gram, potatoes are closer to berries than grains in carbohydrate content.

Potatoes are a moderate source of carbohydrate, but they have a high glycemic index.

Potatoes and the Glycemic Index

As shown in the above table, potatoes have a higher glycemic index (78) than many other high-carbohydrate foods.

For comparison, sweet potatoes have a glycemic index of 63.

Dr. Walter Willet, professor of epidemiology and nutrition at Harvard, is a long-standing critic of potatoes due to their high-starch nature (14).

Along these lines, in one study, ten subjects with type 2 diabetes were given 50 grams of carbohydrate either from glucose or cooked potato.

But there can be significant variations in glycemic response 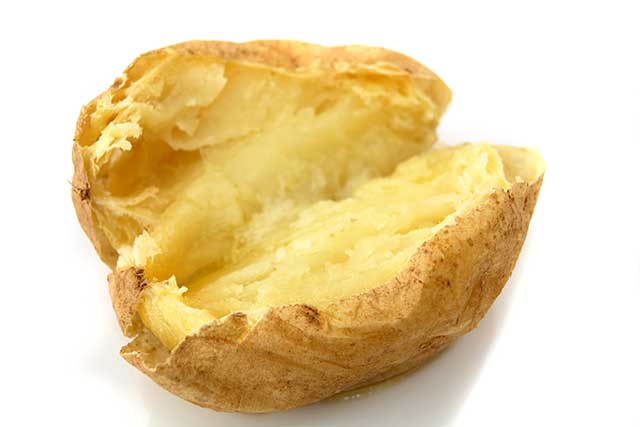 Firstly, glycemic responses to the same food can vary from individual to individual (16).

On this note, a study found that boiled and then mashed potatoes had a glycemic index of 108 when eaten alone. The researchers then tried adding chicken breast and oil to the meal, and the glycemic index fell to only 54 (17).

In the context of this whole meal, the glycemic index (GI=54) was similar to a snack of blueberries (GI=53).

Additionally, the way we prepare and cook potatoes can also affect the glycemic index. Cooking and cooling potatoes (and then re-cooking if desired) increases their resistant starch content, and since resistant starch is indigestible, it causes the GI to fall (18).

Key Point: Potatoes are a moderately high source of carbohydrate, and they have a high glycemic index. However, their GI is significantly lower when consumed as part of a meal with protein and fat.

Some studies have linked high “potato” consumption with chronic disease. However, others have shown no links in this regard.

On the other hand, many systematic reviews find no associations between potatoes and chronic disease:

Despite some of the links between potatoes and chronic disease, it is worth remembering that most of us don’t eat potatoes in a healthy way.

In other words; people eat potato chips and french fries more often than they eat homemade boiled potatoes. This fact could account for some of the negative studies on potato products as a whole.

The Studies On Potatoes Are Mixed

It is worth remembering that many potato products contain large amounts of oil, which is a potential confounder.

In other words; is the negative data from people eating a meal of whole potatoes with meat and vegetables?

Or is it from individuals eating a hamburger with french fries and cola?

Additionally, by the very nature of potatoes, “people with the highest potato intake” are also likely consuming significant numbers of calories, which is also a confounder.

Overall, the highest quality studies—the systematic reviews—seem to suggest that a modest/moderate consumption of plain potatoes is not something to worry over.

Key Point: Some studies find links between potatoes and type 2 diabetes, but many do not. This could depend on the type of potato product and cooking method.

Do Potatoes Cause Weight Gain?

If you do a quick search on Google, you will see many results discussing potatoes and weight gain.

“Can potatoes cause weight gain?”

Sure – potatoes are high in both carbohydrates and calories, and eating significant amounts of them probably isn’t good for the waistline.

How about consuming large amounts of oven-roasted potatoes?

The combination of oil and starch tastes delicious, may encourage over-consumption, and it is also very high in calories.

However, a better question is “will potatoes cause weight gain?”

The truth here is that no single food, eaten in reasonable amounts, causes weight gain on its own.

For instance, in a randomized trial, potato intake did not cause weight gain in ninety free-living individuals consuming 5-7 servings of potatoes per week, irrespective of their diet (24).

In a slightly more unusual case study, a two-month potato only diet led to a man called Chris Voight losing 21 pounds of weight (25).

While a potato-only diet may not be the healthiest idea in the world, it shows that potatoes don’t uniquely cause weight gain.

In fact, studies suggest that plain boiled potatoes are one of the most satiating carbohydrate foods (26, 27, 28).

However, bring cooking oil and ultra-processed potato products into the equation, and that may change things.

Watch Out For Green Potatoes 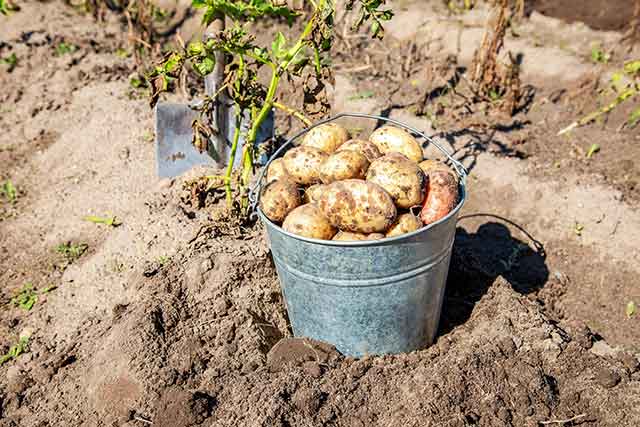 While food allergies and sensitivities can be an issue with any food, adverse reactions to potatoes are rare.

That being said, potatoes contain a chemical compound called solanine. This compound is a type of glycoalkaloid poison that is part of a plant’s natural defense system against pests (29).

When potatoes become exposed to light, their solanine content starts to increase.

At the same time as solanine increases, the chlorophyll content in potatoes also increases. We can see an indication of this from the potato’s green color.

The idea of poisonous potatoes may be surprising, but solanine can be toxic in small amounts, and it can build up very quickly. Eating potatoes with high concentrations of solanine can cause severe adverse symptoms (31, 32).

Potatoes are a reasonably good source of nutrients, they’re versatile, and they are good for satiety.

However, it is worth remembering that they are also high in calories. In other words; some vegetables, such as leafy greens, offer better nutrient-density.

Other than that, potatoes provide a good source of vitamins and minerals.

Providing we eat them in their unprocessed form, then potatoes are reasonably nutritious.

For more on vegetables, see this guide to root vegetables.