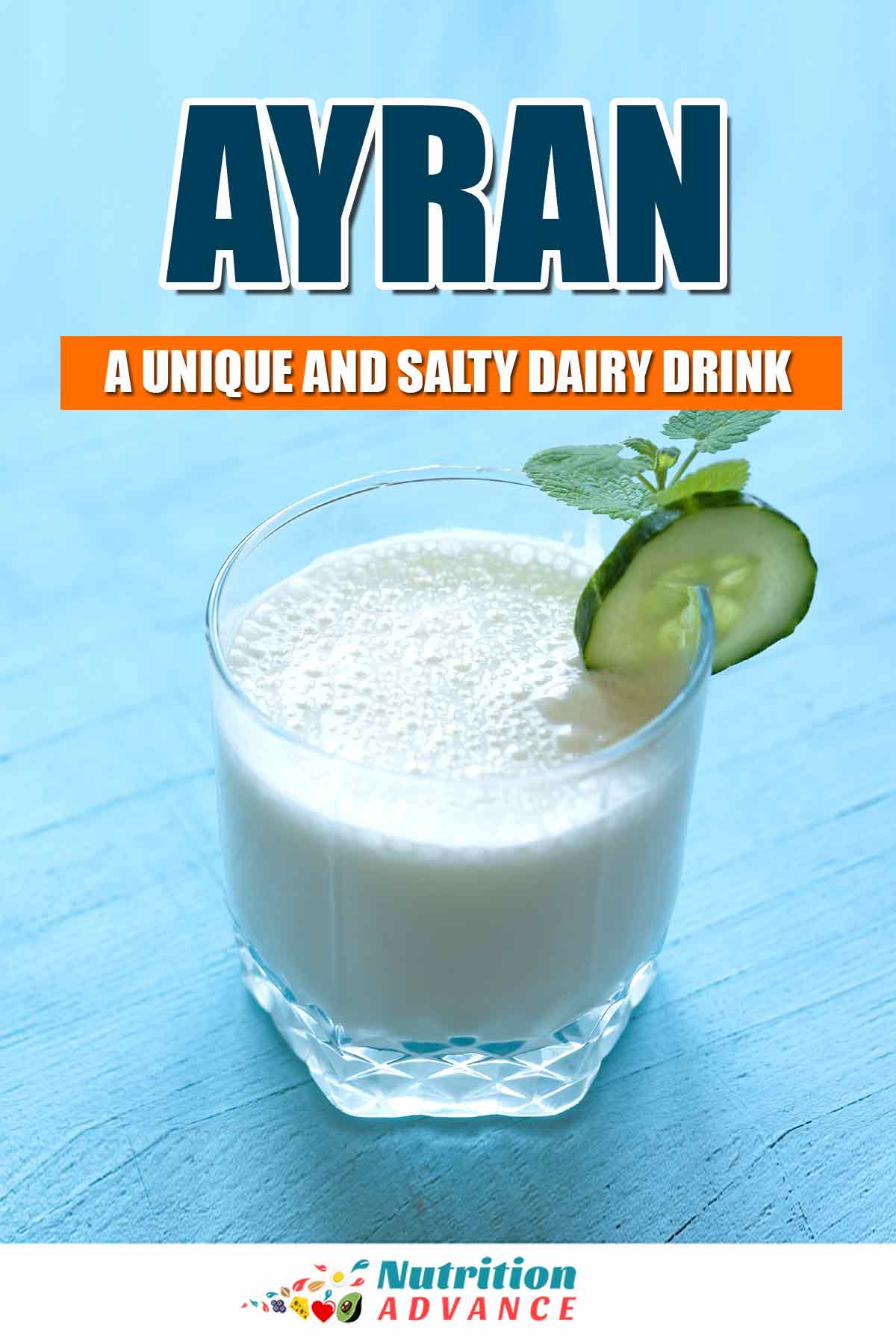 Ayran is a unique and salty yogurt-based drink that is extremely popular in much of the Middle East.

This enjoyable drink is a source of protein, probiotics and electrolytes, and it is a refreshing summer beverage.

In this article, we take a look at what Ayran is, what it offers nutritionally, and how to make it at home. 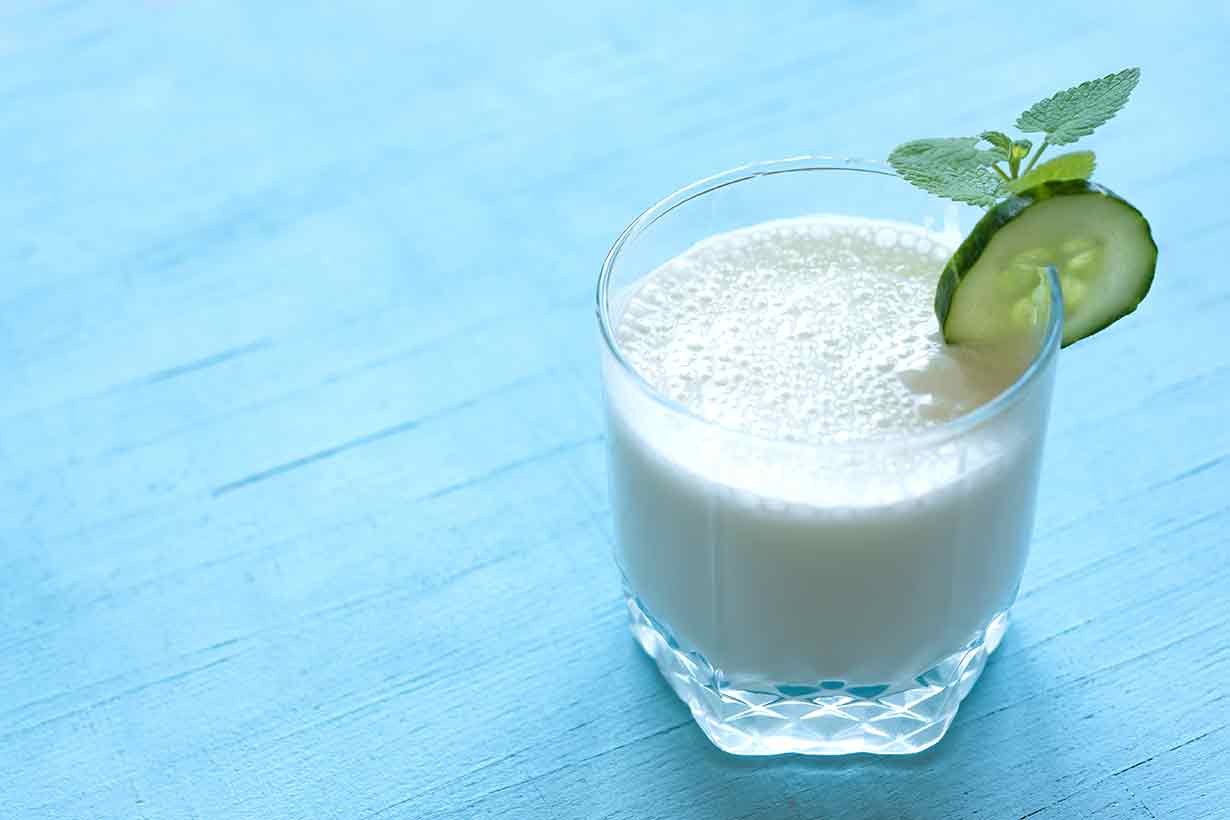 Ayran is thought to have started life more than one thousand years ago, and it has been a popular Turkish drink since that time.

According to a book detailing the various dairy products in the world, the Göktürks, who were Turkic people living in medieval Central Asia, discovered ayran during a time of war (1, 2).

Ayran is made by diluting regular yogurt with water, adding a small amount of salt, and then blending the three ingredients. Not surprisingly, the drink has a slightly sour and salty taste and a liquid consistency.

The drink is widely available in its homeland, and it is usually served ice cold. Ayran has also started to appear in grocery stores around the world over recent years.

According to a survey of 3411 Turkish adults, aside from water, ayran is the most consumed drink alongside lunch and dinner for adults over the age of 40. For younger adults, ayran is the second most popular drink after carbonated soft drinks (3).

The drink is consumed all-year-round, but it is especially seen as a cold and refreshing drink during the hot summer.

Key Point: Ayran is a popular Turkish dairy drink made from yogurt, water, and salt.

Due to the nature of its ingredients, ayran is nutritionally similar to any other yogurt regarding the ratio of nutrients it offers.

Unfortunately, the USDA has not published full nutritional data. However, the nutritional values of a commercially available ayran product (Merve) are shown below (4):

As shown in the table, ayran provides a combination of fat, carbohydrate, and protein.

According to the commercially available ayran drink’s nutritional values, it contains the following vitamins and minerals per 8 fl oz (241g) serving (4):

However, these nutrients are only the ones that are subject to mandatory nutritional labeling requirements (5).

It is worth noting that ayran will also offer the same nutrients that regular yogurts do, such as B vitamins, phosphorus, and zinc.

Key Point: Ayran is a good source of protein, B vitamins, calcium, and vitamin A.

Does drinking ayran have any health benefits?

Since the drink is a type of fermented dairy, ayran also contains various strains of probiotics.

The traditional ayran recipe involves mixing yogurt with water. In contrast, some industrially produced ayran products may use a slightly different production process of adding a yogurt starter culture to milk (6).

Either way, ayran products will contain the same probiotic strains as regular yogurt.

On this note, several high-quality studies suggest probiotic intake may have beneficial effects on human health.

A systematic review and meta-analysis of randomized controlled trials found that daily probiotic yogurt intake lowered blood levels of C-reactive protein (CRP). CRP is a type of protein found in the blood which rises in response to inflammation (9).

On this note, a systematic review and meta-analysis of twenty randomized controlled trials conducted by the University of York looked at the effectiveness of probiotics for reducing the duration of illness.

Interestingly, this study found that participants using daily probiotics had fewer absences from work/school and recovered from infectious respiratory conditions approximately one day faster than participants who were given a placebo (12).

Key Point: As a fermented dairy product, ayran contains a range of probiotics that may have potential health benefits.

How does ayran differ from kefir?

As a drinkable form of fermented dairy, there will be understandable comparisons between ayran and kefir.

Kefir is a nutritious dairy drink too, but there are some key differences between the two:

How to make ayran at home

One of the best things about ayran is just how easy it is to make. As a result, its simple to make at home and requires only a few minutes.

There is no exact recipe for ayran, and the amount of each ingredient used may differ depending on who is making the drink.

However, here is a simple recipe for two servings of a drink with a slightly thick consistency:

For those who want a drink with a runnier texture, doubling the water content should be about right.

Although traditional ayran is served unflavored, there are some additional popular ingredients that some people like to use for flavoring.

Some of these include cucumber, mint, and lemon or lime juice. Adding these extra ingredients isn’t necessary, but some people may like to experiment with different flavors.

Where to buy ayran

For those who would prefer to have their drink ready-made, ayran is now available at many large retailers around the world.

In the United States, Walmart stock a brand of ayran called ‘Merve.’ Likewise, Tesco in the United Kingdom sells the drink under the brand name ‘Nomadic.’

A quick Google search should be able to provide information on the ayran products available from country to country.

Despite having straightforward ingredients, ayran has a uniquely sour and salty taste that may be unusual for those who are not used to it.

However, it’s a tasty and refreshing drink, and it’s a good source of calcium, protein, and probiotics too.

All in all, it’s an interesting drink that is worth trying at least once.

21 Dairy Products From Around the World