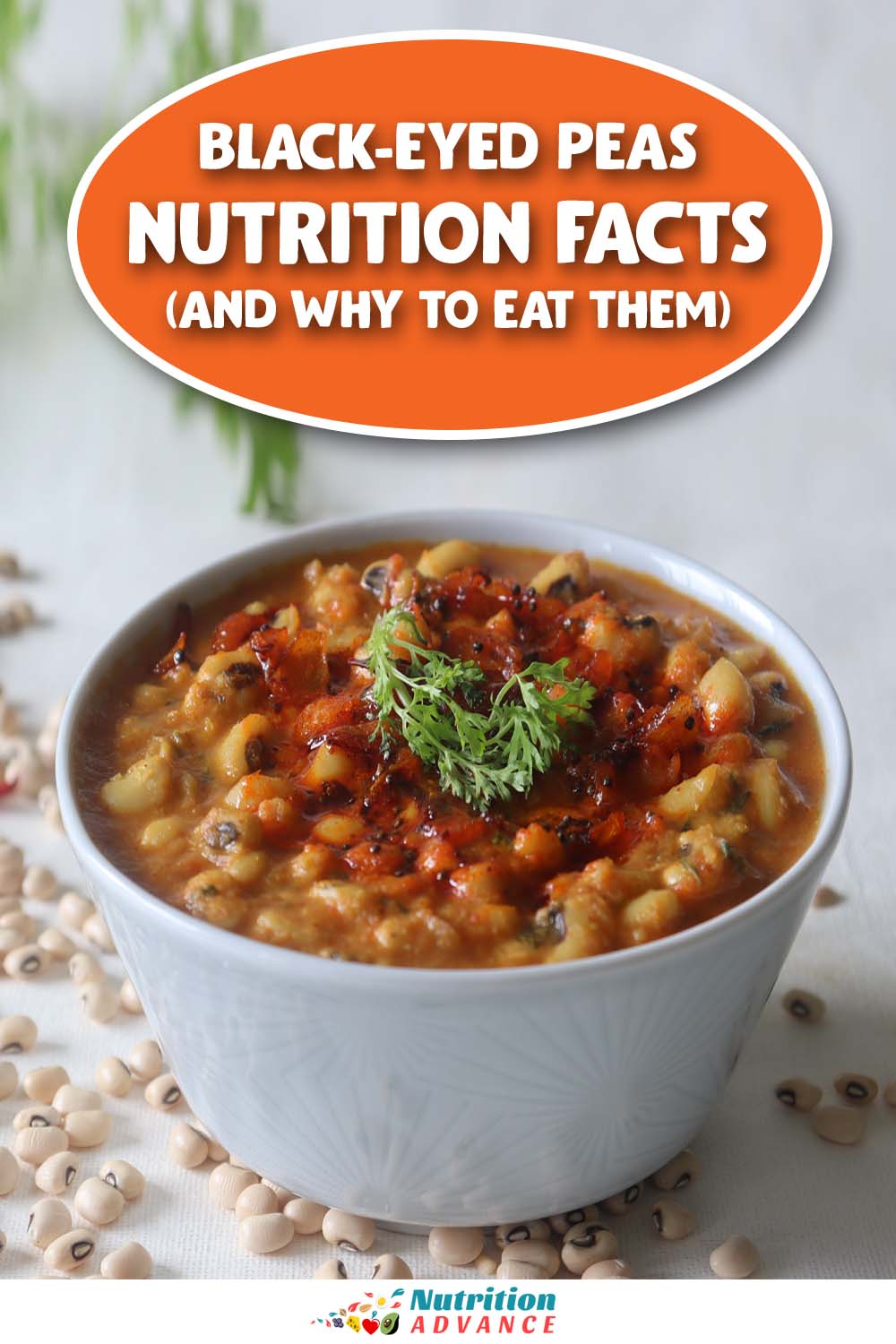 The black-eyed pea is a bean with some interesting nutritional properties.

Among these, black-eyed peas provide a wide range of nutrients and may have some beneficial health effects.

This article looks at the nutritional values, benefits, and potential downsides of black-eyed peas.

What Are Black-Eyed Peas?

Before we look at their nutritional properties, let’s first summarize what black-eyed peas are.

Black-eyed peas are a bean that belongs to the legume family (Fabaceae). Legumes are a large group of foods that includes beans and lentils.

Regarding their appearance, they are equivalent to a red kidney bean in size and somewhat similar in shape.

The name ‘black-eyed pea’ comes from the eye-like circular pattern on the bean, which is usually black but can vary in color.

Black-eyed peas are also known as cowpeas or black-eyed beans, and they have the scientific name of Vigna unguiculata.

It is thought that black-eyed peas originated in West-Central Africa. However, they grow throughout the world (1).

Since dried black-eyed peas are the most common, here are the nutritional values for the dried beans.

The following data shows the nutritional values for one cup (171g) of cooked black-eyed peas. The source for all nutrition data is the USDA’s FoodData Central database (2).

As shown, despite not offering quite as much as soybeans and lupin beans, black-eyed peas are a rich source of fiber and protein.

They also provide a good range of vitamins and minerals in high amounts.

Among these polyphenols, they are particularly rich in (3):

However, little is understood about the mechanisms through which polyphenols may have benefits. Therefore, further research is necessary to understand this area better (7).

Interestingly, research suggests that these polyphenols and peptides may have combined bioactive properties (8).

However, what happens in a test tube and the human body are two very different things. Furthermore, such studies often don’t pan out when tested in human trials. Thus, more research is necessary before making any strong claims regarding human health.

Key Point: Black-eyed peas contain polyphenols and bioactive peptides, both of which may provide benefits.

Another potential benefit of black-eyed peas is a relatively low glycemic index (GI).

GI refers to how a particular food affects blood sugar levels (how much it increases them) after consumption.

On this note, a study that involved 40 nondiabetic participants looked at the effect that black-eyed peas had on blood glucose levels when cooked in different ways (13).

The forty participants were split into four groups of ten, each provided with 50 grams of carbohydrate from either:

The glycemic load (glycemic index multiplied by the carbohydrate content of food in grams) is an important consideration for individuals, especially those with diabetes, trying to control their blood sugar levels.

Key Point: Several studies suggest that black-eyed peas have a glycemic index that is in the mid-40s.

Studies consistently demonstrate that as LDL-C and particularly Apo-B levels increase, the risk of cardiovascular incidence and mortality rises (16, 17, 18).

For this reason, dietary or medical interventions that can lower LDL-C levels can reduce the risk of cardiovascular disease and mortality.

In this trial, 38 adults with high LDL cholesterol levels (mean: 182.5 mg/dL) were provided with either 25 grams of cowpea protein isolate (intervention group) or 25 grams of casein daily (control group) for six weeks. Four weeks after finishing, the intervention and control group swapped round for six further weeks.

Notably, cowpea protein lowered LDL levels by 18.9% compared to casein and apoB levels by 14% when consumed daily over six weeks (20).

Interestingly, extracts from other legumes like adzuki beans have also shown potential for lowering LDL levels (21).

Key Point: A recent randomized controlled trial suggested that black-eyed pea protein may have a beneficial effect on markers of cardiovascular health.

On this note, research has demonstrated that bioactive peptides and polyphenols contained within black-eyed peas have angiotensin I-converting enzyme (ACE) inhibitory properties (22, 23).

To explain further, ACE is a hormone that plays a role in blood pressure regulation and causes vessels to restrict. Thus, anything that inhibits ACE will relax and widen blood vessels, decreasing blood pressure (24, 25).

Unfortunately, there is no direct research on whole black-eyed peas and the effect they may (or may not) have on blood pressure.

Rich Source of Fiber and Protein

One of the biggest benefits of black-eyed peas is that they contain significant amounts of both protein and fiber.

See this guide to mung beans for another high-protein, high-fiber legume.

As with other legumes, there are some potential downsides of black-eyed peas.

This does not mean that we shouldn’t consume them, as they are otherwise healthy and nutritious, but it is just something to be aware of.

Firstly, black-eyed peas contain several anti-nutritional factors (antinutrients) such as phytic acid. Phytic acid can bind to various minerals like magnesium and zinc, thus lowering the absorption rate for these minerals in the same meal (26).

Unfortunately, some people experience digestive discomfort to varying degrees, often presenting as bloating and flatulence, when consuming oligosaccharides. This is because humans lack the enzymes needed to digest oligosaccharides properly (28).

However, bacteria that live in the gut can digest oligosaccharides.

Therefore, oligosaccharides pass through the small intestine to the large intestine (colon), where gut bacteria ferment them. The resulting gases released from their fermentation can cause these digestive discomfort issues (29).

Individual variation exists between people, and some people may notice these issues while others may not.

For those who experience digestive issues with black-eyed peas, soaking them before cooking may help.

The researchers tested the oligosaccharide levels before and after soaking the beans for 12 hours and then cooking them. The findings were as shown in the following table (30):

Key Point: Black-eyed peas contain certain types of carbohydrates that can cause digestive discomfort for some individuals, particularly when consumed in large portions. However, properly soaking and cooking the beans leads to a substantial reduction in oligosaccharide content.

How To Cook Black-Eyed Peas

The process for cooking black-eyed peas will depend on whether the beans are dried or canned and whether they have been soaked.

After bringing water to a boil, cooking dried black-eyed peas from scratch will take approximately 60-75 minutes.

If the beans have been pre-soaked, it may take anything from 30-60 minutes to cook them, depending on the soaking time.

However, canned black-eyed peas have been pre-cooked and should only take around 5 minutes to reheat them on the hob at moderate heat.

How To Use Them

There are many different ways to use black-eyed peas, and these can include:

Legumes typically offer many nutritional benefits, and black-eyed peas are no different.

These little beans are a rich source of fiber, protein, vitamins, and minerals.

Most interestingly, they may also have health-protective properties beyond their nutrient profile.

The Benefits of Adzuki Beans (and Full Nutrition Facts)