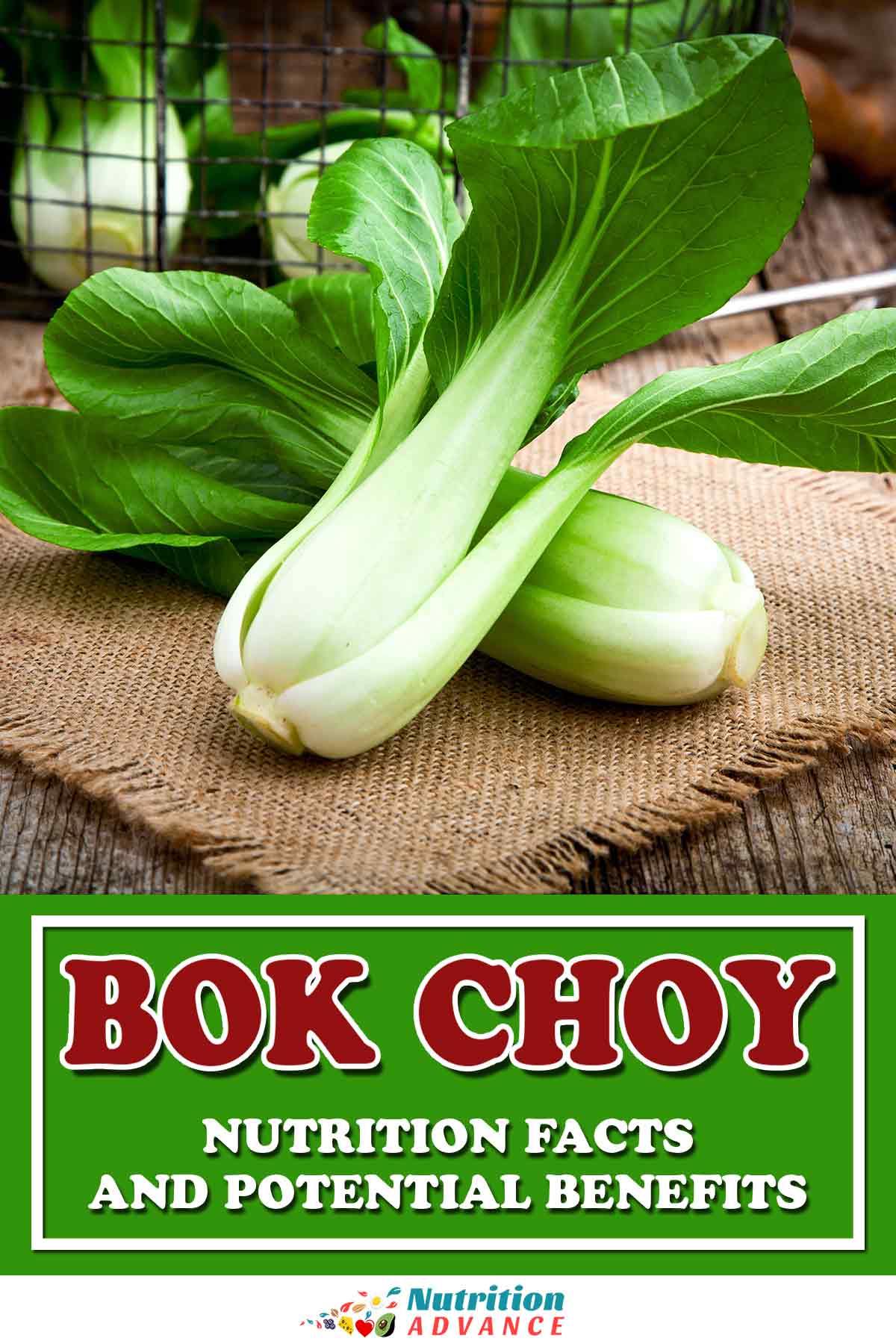 While the origins of bok choy lie in 5th century China, it is now one of the most popular cultivated vegetables around the world (1).

However, what does this common vegetable offer nutritionally, and what benefits might it have?

This article examines the nutritional values and potential benefits of bok choy. 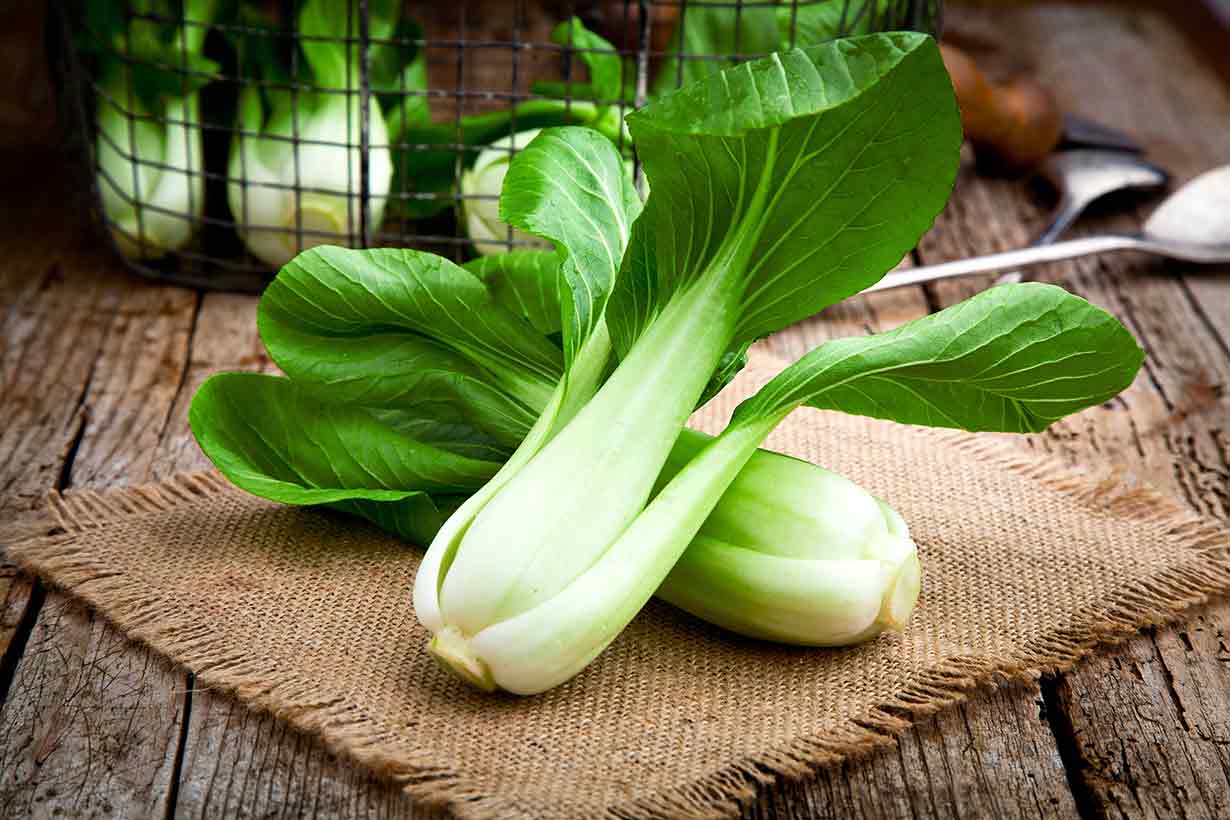 According to the United States Department of Agriculture’s (USDA) Food and Nutrient Database, here are the nutritional values per 3.5 oz (100g) serving of bok choy (2).

As shown in the nutritional values, bok choy is extremely low in calories and contains minimal amounts of carbohydrates, fat, and protein.

Alongside other vegetables such as kale, broccoli, and Brussels sprouts, bok choy is a member of the Brassica (cruciferous) family of plants (4).

The digestion of these compounds leads to the production of several metabolites, including isothiocyanate and nitriles (7, 8, 9).

Furthermore, research has demonstrated that these compounds are biologically active and may have some desirable effects. For example, cell (test-tube) studies have shown that glucosinolates and their metabolites can have an inhibitory effect on a wide range of different tumors (10, 11).

However, it is crucial to understand this information in the appropriate context. There is a lack of human trials demonstrating that these compounds have a protective effect against disease.

Further research is necessary to gain a better understanding of the potential effects of glucosinolates on human health.

Key Point: Bok choy contains glucosinolates and their bioactive metabolites, which may have potentially beneficial properties.

Bok Choy Is Low In Oxalates

Many leafy greens contain high amounts of oxalic acid, which is otherwise known as oxalate (12, 13).

For example, two of the most popular leafy greens – spinach and beet greens – have some of the highest oxalate concentrations among food and significantly increase urinary levels of oxalate (14).

It should be noted that foods containing oxalic acid are often very nutritious, and they are not an issue for most healthy people. However, some individuals with kidney stone issues may have been advised to follow low-oxalate diets (14, 15, 16).

On the positive side, bok choy is a leafy green with one of the lowest oxalate contents among all vegetables (17).

A Rich Source of Polyphenols

Bok choy is a significant dietary source of polyphenols, and it contains various flavonoids and hydroxycinnamic acids (18, 19, 20).

These polyphenols are thought to play a beneficial role in human health, although the exact mechanism through which they exert effects is not yet fully understood (21, 22).

Although most of us only know ‘bok choy’ as one thing, there are several different cultivars of the vegetable (26).

Among these cultivars, purple bok choy stands out, both in terms of appearance and nutritionally.

Here is a photo showing the appearance of purple bok choy: 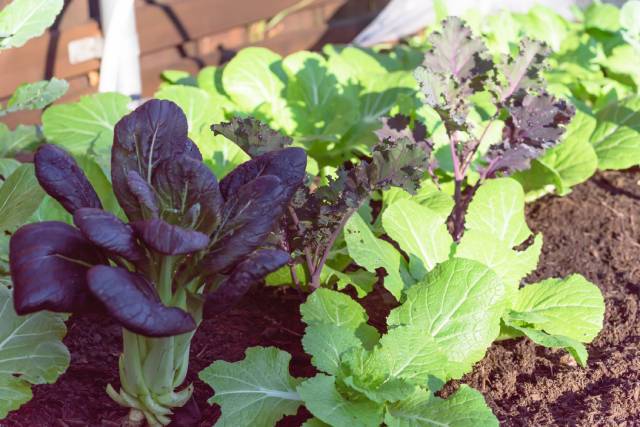 Purple bok choy varieties include ‘rubi’ and ‘purple hybrid,’ and they contain high concentrations of anthocyanins (27, 28).

Anthocyanins are a variety of polyphenol identifiable by their blue, purple, or red pigmentation. These compounds are responsible for the color of foods like blackberries, blueberries, and raspberries (29, 30).

On the topic of anthocyanins, a recent systematic review of randomized controlled trials suggested that anthocyanins may lower levels of low-density lipoprotein (LDL) cholesterol (31).

A further systematic review and meta-analysis of observational studies found that anthocyanins reduce the risk of mortality from heart disease (32).

Research also shows that purple bok choy contains higher amounts of other polyphenols such as kaempferol and quercetin (33).

Key Point: Purple varieties of bok choy are rich in anthocyanins, a type of polyphenol associated with potential health benefits.

A Significant Source of Vitamin A and C

As shown in the nutritional values section, bok choy is an excellent dietary source of vitamins A and C.

The total vitamin A content (from alpha-carotene, beta-carotene, lutein, and zeaxanthin) is 4468 IU (2).

However, none of these compounds are preformed vitamin A (otherwise known as retinol). Instead, they are carotenoids, which are also called ‘provitamin A’ because they can convert to retinol inside the body (34, 35).

The recommended daily value for retinol (preformed vitamin A) is 900 mcg. Based on the provitamin A content of bok choy, a 100-gram serving contains 223.5 mcg of retinol activity equivalents (RAE). Therefore, this is equivalent to 25% of the daily value (2, 3).

Vitamin A is an essential vitamin that plays vital roles in the immune system, vision, and overall growth and development (36).

Bok choy also contains a significant amount of vitamin C, which is equivalent to 50% of the daily value per 100 grams (2, 3).

Vitamin C has many vital roles within the human body. Among these, it plays a critical role in immune function and the production, growth, and repair of tissues (37, 38).

Key Point: Per 100 grams, bok choy provides a quarter of the daily vitamin A needs and half of the vitamin C requirements.

Note: Excessive Intake of Raw Bok Choy May Be Problematic

One potential downside of raw bok choy is that it contains several enzymes collectively known as myrosinase. These enzymes are part of the defense system for plants in the cruciferous family, and they are designed to discourage herbivores from eating the plant (39).

That being said, cases of harm from consuming raw cruciferous vegetables are extremely rare in the scientific literature.

In one case study, an 88-year-old woman was admitted to intensive care with a severe case of hypothyroidism after eating excessive amounts of raw bok choy. However, this woman had been consuming an estimated 1.0 to 1.5 kilograms of raw bok choy daily over many months (42).

While smaller/realistic portions of raw bok choy are unlikely to be an issue, it is also worth noting that heat (and thus cooking) deactivates the myrosinase enzyme (43, 44).

In this regard, the cooking process can change the properties of numerous different vegetables. There are often positive and negative differences between raw and cooked vegetables.

Key Point: Although there is little mention in the scientific literature, regular excessive intake of raw bok choy may be a potential concern for thyroid health.

How To Use Bok Choy

Moving away from the nutritional value of bok choy, let’s take a look at its culinary properties.

Bok choy has a deliciously fresh and flavorful taste with a crunchy texture.

These properties mean that bok choy combines well with a variety of ingredients, and it features in many stir-fried dishes.

In the case that anyone is looking for some recipe ideas, here are some tasty bok choy recipes to try out:

A collection of 32 bok choy recipes

There is a lot to like about bok choy.

This nutritious green vegetable offers large amounts of vitamins and minerals for a minimal amount of calories.

Although further research is necessary, bok choy may also offer additional benefits from the polyphenols and glucosinolates that it contains.

The fact that bok choy is one of the best-tasting vegetables is a bonus, and it works well in a range of meals.

All in all, bok choy is a tasty, affordable, and nutritious leafy green that deserves a place on the plate.

56 Different Types of Vegetables (and Their Nutrition Profiles)