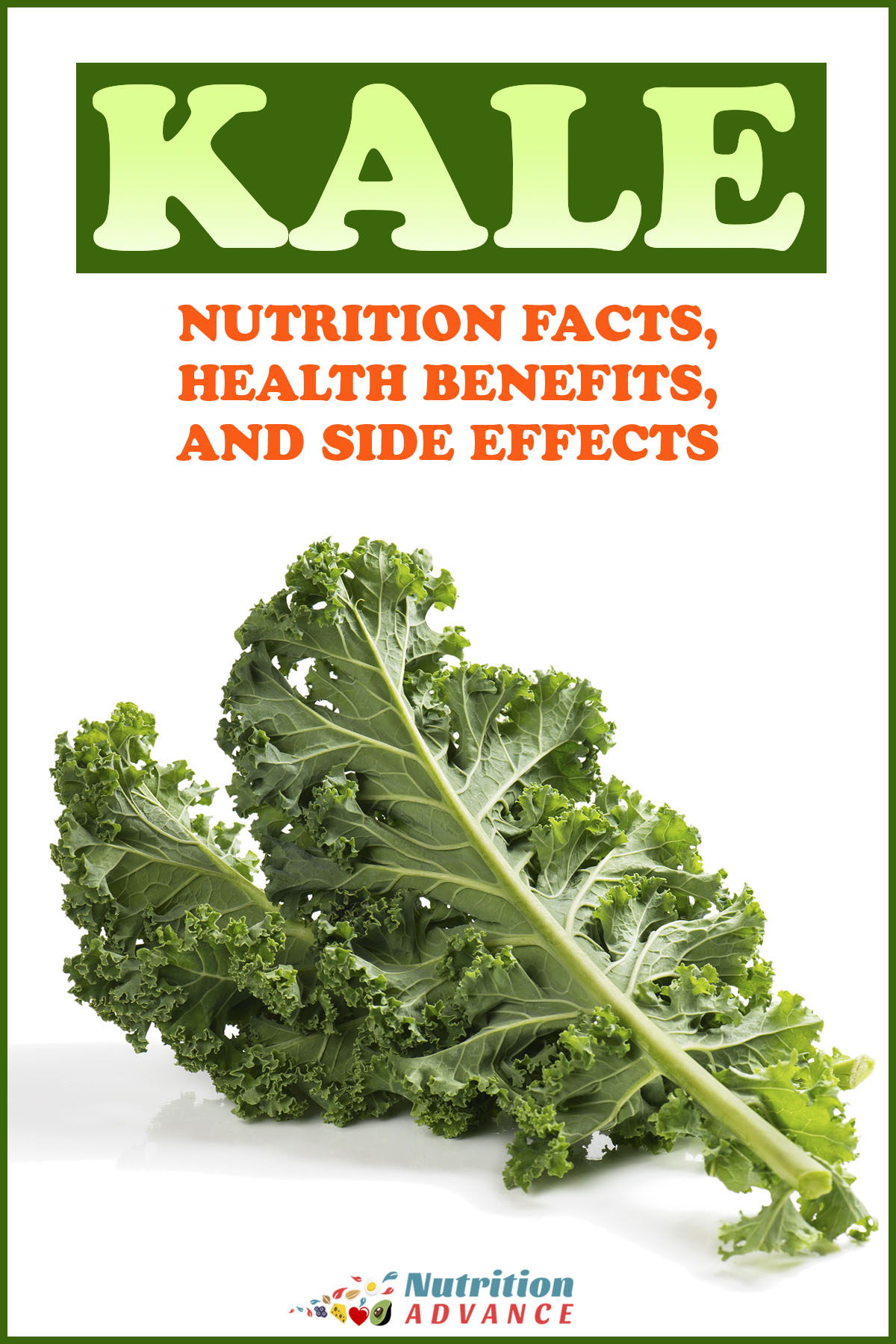 The past decade has been very kind to kale.

After previous years of being relatively unfashionable, this leafy green has become wildly popular in recent years.

These days, it’s hard to escape hearing about the benefits of kale, and you can find kale chips, salads, and smoothies almost everywhere.

However, does it deserve all the hype?

This article examines the facts and myths behind kale’s potential benefits.

1) Kale Is a Significant Source of Vitamin K1 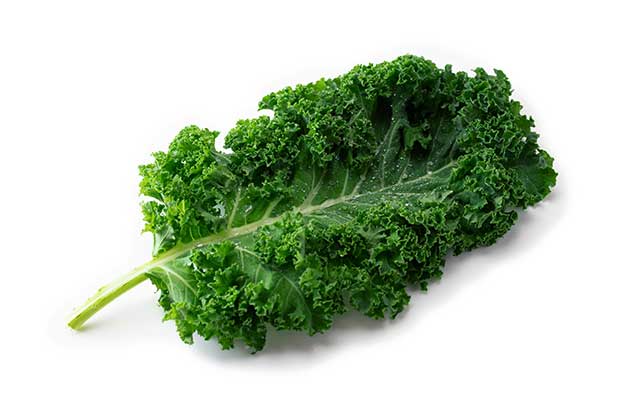 Kale is a substantial source of vitamin K1 (phylloquinone), and it contains 1021% of the reference daily intake (RDI) for the vitamin per 100 grams (1).

Vitamin K1 has numerous health benefits, and the nutrient plays a vital role in blood coagulation and maintaining healthy bones (2, 3).

However, it is worth noting that vitamin K1’s bioavailability is relatively low.

On this note, research shows that the average bioavailability of vitamin K1 from kale in humans is 4.7% (4).

As an aside, vitamin K2 (menaquinone) tends to be the most bioavailable form of vitamin K, and this is available from animal and fermented soy products such as aged cheese and natto.

2) Contains Isothiocyanates Such As Sulforaphane

Alongside other cruciferous vegetables like Brussels sprouts and mustard greens, kale is one of the most significant food sources of these compounds (6).

Studies show that after absorption, these compounds are conjugated (combined) with glutathione, which is known as the body’s “master antioxidant” (7).

Regarding isothiocyanates, there is a range of studies (and speculation) investigating their potential cancer-protective properties. Until now, studies show that isothiocyanates have anti-cancer effects in laboratory animals and human cell (test tube) studies (8, 9).

However, at this point, there is no proof that they have these effects in humans, and more research is necessary before such claims can be made (10, 11).

Perhaps the only significant study actually in human subjects was a clinical trial of an isothiocyanate compound in 86 healthy smokers.

In this randomized controlled study, the results demonstrated that the isothiocyanate group had a 7.7% reduction in the metabolic activation of a tobacco-smoke related carcinogen (12).

Key Point: Kale contains sulfur-containing compounds that are often claimed to have cancer-preventive properties. However, this is as yet unproven.

Nutrient density refers to the proportion of nutrients a food can offer compared to the typical amount of energy (calories) it provides.

In this regard, kale performs exceptionally well.

Furthermore, 100 grams of kale contains these nutrient concentrations for only 50 calories.

Kale also contains every single essential mineral in varying proportions. Among these, the vegetable is especially high in manganese, calcium, and potassium.

All leafy greens offer a lot of nutritional value for very few calories, and alongside vegetables like spinach, kale is one of the best.

Kale is one of the best dietary sources of vitamin C, and it offers approximately 200% of the RDI per 100 grams (1).

When you consider the amount of vitamin C per calorie, kale is a better source of the nutrient than some traditional vitamin C options.

For instance, the table below shows how much of the vitamin various foods contain relative to their calorie density (13, 14, 15);

As shown, kale compares very well to foods traditionally thought of as being high in the vitamin.

Vitamin C has antioxidant functions, and it is thought to help boost the immune system and protect against free radical damage (16).

Key Point: Kale is an excellent source of vitamin C.

5) Kale May Lower Blood Glucose Response To a Meal

Some studies suggest that kale may have a beneficial effect on postprandial blood glucose responses.

To put it another way; kale may help to suppress the blood sugar spike after eating a meal.

In a randomized controlled trial, 62 Japanese adults consumed a high-carbohydrate meal alongside either a placebo or small serving (7-14 grams) of kale.

Interestingly, the results demonstrated that the blood sugar response in the kale group was suppressed compared to placebo (17).

Other than this study, there is little research in the area, so there is limited evidence at this time.

6) Provides a Large Supply of Carotenoids (Provitamin A)

That said, kale does not contain pre-formed vitamin A, otherwise known as retinol, and instead, it provides pro-vitamin A carotenoids.

Retinol, found in foods like liver and eggs, is also known as “pre-formed vitamin A” and our body can use it in its natural form. However, our body must first convert provitamin A (as found in kale) to retinol to use it.

Unfortunately, the rate of conversion can be low, particularly in people with specific genetic variants of a gene called BCO1 (18, 19).

Despite this, vitamin A carotenoids are still associated with numerous health benefits (20).

In particular, a systematic review and meta-analysis of metabolic syndrome and carotenoid intake analyzed the relationship over 20 years (1997 – 2007) of studies.

The analysis found that there was a significant inverse relationship between carotenoid intake and metabolic syndrome (21).

However, as always, a statistical association does not infer that carotenoids were the cause of lower metabolic syndrome.

Key Point: Kale is a great source of provitamin A carotenoids. However, it might not be a good source of vitamin A for some people.

7) Contains the Antioxidants Lutein and Zeaxanthin 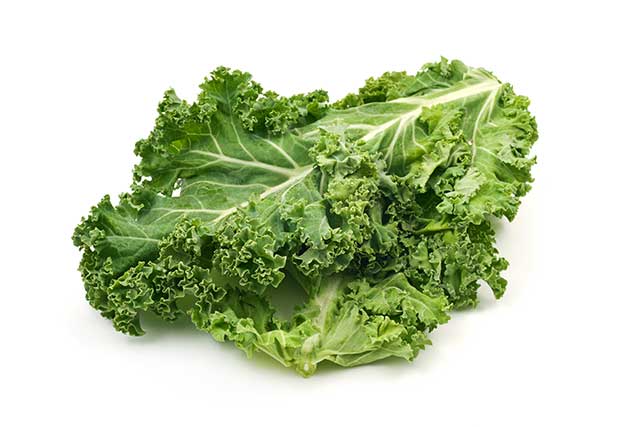 Specifically, kale provides two carotenoids that act as antioxidants in the body called lutein and zeaxanthin. Kale is one of the very best dietary sources of these two compounds (22).

Lutein and zeaxanthin are thought to have a particularly beneficial role in maintaining healthy eyesight.

For instance, systematic reviews and meta-analyses suggest that the two antioxidants may provide benefits in preventing and treating age-related macular degeneration (23, 24, 25).

Research shows that kale may help to lower blood pressure.

The nutrient profile of kale also supports the idea that this leafy green could have positive effects on blood pressure.

For example, kale is a rich source of magnesium, potassium, and vitamins C and K.

Studies show that magnesium and potassium are capable of reducing blood pressure, and low blood levels of vitamin K are associated with hypertension (27, 28, 29).

Some studies also show that vitamin C may help lower blood pressure, but the evidence is somewhat inconsistent for this (30).

That said, our whole lifestyle is important, and overall diet, exercise, and sleep habits all strongly influence blood pressure.

Key Point: Kale may help to lower blood pressure as part of a healthy lifestyle.

9) Kale Contains a Variety of Polyphenols

It is easy to find claims that these compounds have anti-inflammatory, blood-pressure-lowering and anti-diabetic properties.

However, most of the studies on kaempferol and lignans are test tube and animal studies, and little human research is available (35, 36, 37).

A systematic review of randomized controlled trials does support the claim that 500 mg> quercetin can lower blood pressure, but kale only contains 7.7 mg per 100 grams (32, 38).

For now, it is probably a good idea to take claims about kale polyphenols with a pinch of salt until better research is available.

Key Point: Kale contains polyphenols, but there is no evidence that the polyphenolic compounds in kale have benefit at the doses they are in.

Kale also has a couple of potential drawbacks regarding some of the compounds it contains.

1) Kale May Have Interactions With Warfarin Medications

Warfarin is a medication prescribed for people at risk of harmful blood clots, and it works by impairing vitamin K’s ability to help blood clot (39).

Since kale is such a significant source of vitamin K, it is a food that may potentially interfere with warfarin (40).

As such, anyone taking warfarin or other blood-thinning medications may wish to consult their doctor about consuming foods high in vitamin K.

Key Point: As a rich source of vitamin K, kale may potentially interfere with anticoagulant drugs.

Kale is a goitrogenic food and it contains compounds called goitrogens (41).

On the negative side, research shows that these compounds may negatively affect individuals with impaired thyroid function. Goitrogens can inhibit the uptake of iodine by the thyroid, which can further impair the synthesis of thyroid hormones (42, 43).

However, only “very high intakes” are an issue, and one study showed that a 150-gram daily intake of Brussels sprouts (also high in goitrogens) for four weeks did not affect thyroid activity (44, 45).

Lastly, cooking kale will significantly reduce its concentration of goitrogens (46).

Key Point: Kale contains goitrogens, which may be an issue for some people in very high amounts.

For reference purposes, here is the full nutrition profile for kale per 100 grams (1).

Overall, kale is a nutrient-dense food with several potential health benefits, mainly related to the essential vitamins and minerals it contains.

However, some of the more exaggerated claims about kale preventing diseases need taking with a grain of salt.

In summary, kale is a great way to get some extra nutrients into our diet, but it’s not a superfood with magical benefits.

To learn about another nutritious green vegetable, see this guide to the benefits of beet greens.

For more on vegetables in general, see this guide to (almost) every vegetable.