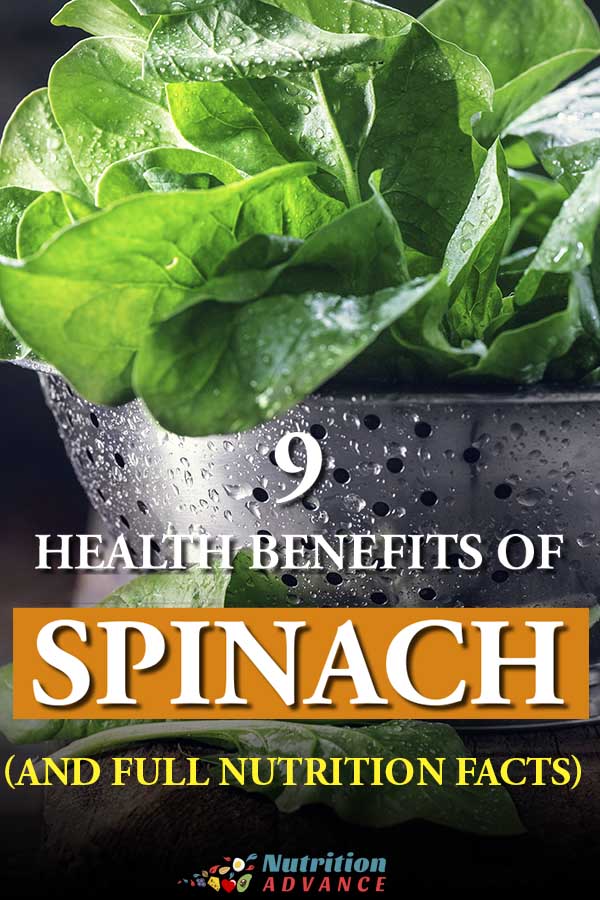 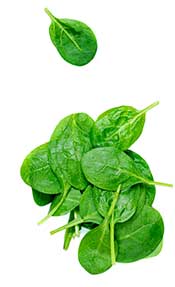 Spinach is one of the most nutritious vegetables in the world.

When it comes to nutrient-density, this leafy green vegetable is difficult to beat.

Although spinach is very low in calories, it is loaded with beneficial nutrients.

This article will provide a science-backed guide to spinach and its health benefits.

Known by the botanical name of ‘Spinacia oleracea,’ spinach is a leafy green vegetable that originated in South-West Asia (1).

There are many different species of spinach, but the vegetable generally has rounded, dark green leaves.

In the present time, spinach grows all around the world, and it is a popular part of the cuisine in many countries.

Spinach is also very adaptable, and people consume it in a variety of different ways, from soups and curries to raw salad leaves.

This leafy green vegetable has a strong, flavorful taste, a slightly bitter aftertaste, and it can sometimes overpower milder flavors.

Key Point: Spinach’s origins lie in Asia, but it now enjoys popularity throughout the world. It is a leafy green vegetable with a flavorful and bitter taste.

Here you will find the complete nutritional values for spinach per 100-gram serving (2).

As shown in the table, spinach is a very low-energy food and contains a minimal amount of calories.

The calories in spinach are primarily from small amounts of carbohydrate and protein, with minimal fat content.

Spinach is a rich source of minerals, and it is particularly high in vitamin K1 and carotenoid vitamin A precursors.

Spinach is a rich source of manganese and magnesium, and it contains a range of other minerals in small to moderate amounts.

Key Point: Spinach is a low-calorie vegetable, but it is high in many essential vitamins and minerals. 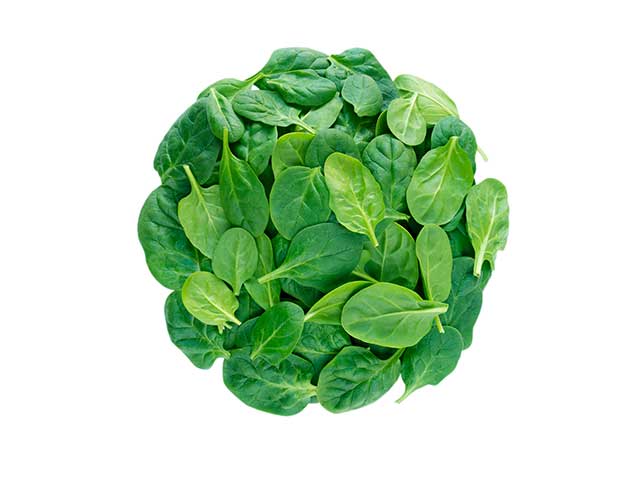 Most of the health benefits that spinach can confer relate to the nutrients it provides.

Additionally, spinach contains some interesting compounds such as kaempferol and nitrate, and these compounds may have a beneficial impact on our body.

1) Rich In Carotenoids (Vitamin A)

Vitamin A is an essential fat-soluble vitamin that can boost immunity and has antioxidant activity (3).

Spinach is one of the biggest food sources of provitamin A carotenoids. However, it is worth noting that carotenoids are not precisely the same as vitamin A.

In contrast to bio-available vitamin A (retinol) found in oily fish, eggs, and organ meats, carotenoids are not in a form the body can readily use (4).

To use carotenoids, our body must first convert these compounds into retinol. For this reason, carotenoids are often called vitamin A precursors.

Unfortunately, the rate at which humans can convert carotenoids to retinol is relatively low. Researchers believe that it takes around 12 parts of carotenoids to have an equivalent effect to 1 part of retinol (5).

However, because spinach still contains such a large amount of carotenoids, this would still provide benefit. Additionally, some carotenoid compounds have further interesting effects rather than just vitamin A activity. We will look at this in greater detail later.

Spinach provides over 604% of the RDA for vitamin K. This essential fat-soluble vitamin plays an important role in several biological processes.

Most notably, vitamin K is associated with cardiovascular and skeletal system benefits (6);

We can find vitamin K1 mainly in green vegetables and sea vegetation such as seaweed.

In contrast, vitamin K2 occurs in animal foods like cheese, meat, and organ meats, and also in fermented foods such as natto.

Similar to the vitamin A issue, plant sources of vitamin K have poor absorption rates in humans.

Researchers suggest that the efficiency at which humans absorb the vitamin K in spinach could be as low as 10% (7).

That said, since spinach is a significant source of vitamin K, even a worst-case scenario of only being able to absorb 10% would still account for more than 60% of the recommended daily allowance for vitamin K per 100 grams.

We can also increase the absorption rate of all fat-soluble vitamins (A, D, E, K) by consuming them alongside a source of fat.

A bit of butter on top of spinach is not only tastier but healthier too. 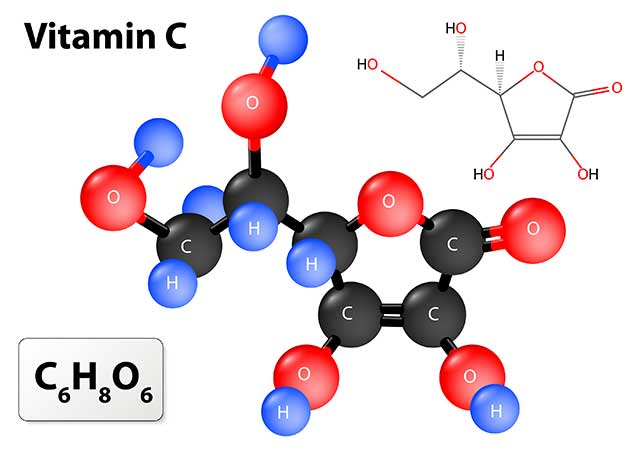 Among vegetable sources of vitamin C, spinach is one of the best, and it provides almost 50% of the RDA per 100 grams.

Vitamin C is an important vitamin that has several vital functions in our body (8, 9);

An easy way to meet 100% of vitamin C’s RDA would be a 200-gram portion of spinach alongside some steak. For extra flavor and better absorption of the fat-soluble vitamins, try sauteing the spinach in the remaining beef fat.

Key Point: Spinach provides a fairly good source of vitamin C, and it provides around half the RDA per 100 grams.

Spinach is rich in dietary folate, and it contains 49% of the RDA per 100 grams.

Folate is a member of the B vitamin family, and it has the crucial tasks of producing energy, making new DNA, and creating new red blood cells (10, 11).

Additionally, folate can help to protect against neural tube defects and other pregnancy-related complications.

As a result, it is especially important for pregnant women to consume enough of this vitamin (12). 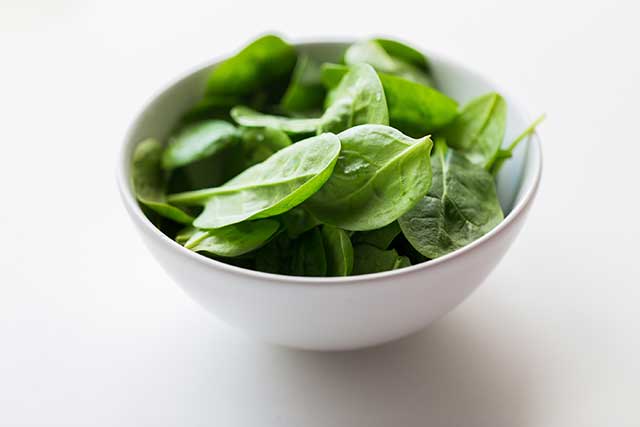 A further advantage of spinach is that it has high fiber levels.

100 grams of this leafy green provides 3.6 grams of carbohydrate, but most of this—2.2 grams—is fibrous carbohydrate.

In other words, over 60% of the carbs in spinach are from fiber.

On this note, fiber has some proven and also some theoretical benefits.

For one thing, higher fiber intake can;

6) May Help To Reduce Cancer Risk

Take this one with a pinch of salt, but research suggests that certain compounds in spinach may help to reduce the risk of cancer.

Here are some studies on this topic;

There is no causal proof that spinach—or any vegetable—can help to prevent disease.

However, since these foods are often a rich source of nutrients and phytonutrients, it is likely that they can help to boost various measures of our health.

Key Point: Spinach may potentially help to reduce the risk of cancer. 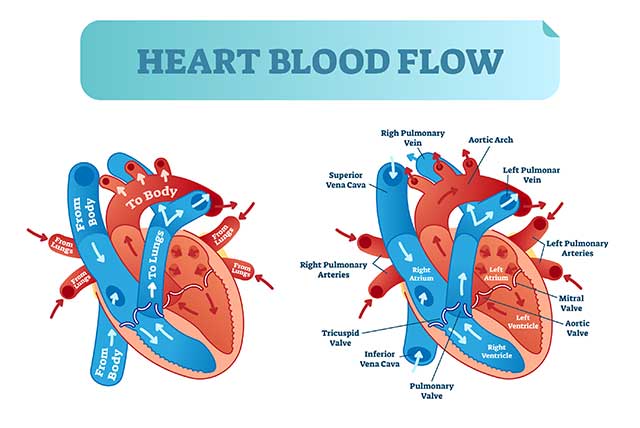 Spinach is one of the most concentrated sources of dietary nitrate (18).

This natural compound can accumulate in plants growing in nitrate-rich soil, and it can have some beneficial effects when we consume it.

For example, our gut bacteria can convert nitrate into something called nitric oxide (19).

Markedly, nitric oxide can have significant impacts on vascular health such as lowering blood pressure.

Here is a summary of some recent research;

Key Point: Spinach is a rich source of dietary nitrate, which can has benefits for vascular health.

Kaempferol is a flavonoid polyphenol which we can find in certain plant foods, and spinach is a particularly high source (23).

Numerous studies suggest that this compound may have various anti-diabetic, cardioprotective, and anti-inflammatory effects (24).

However, there is no proof of these effects in human clinical trials at this time, so the jury is still out. 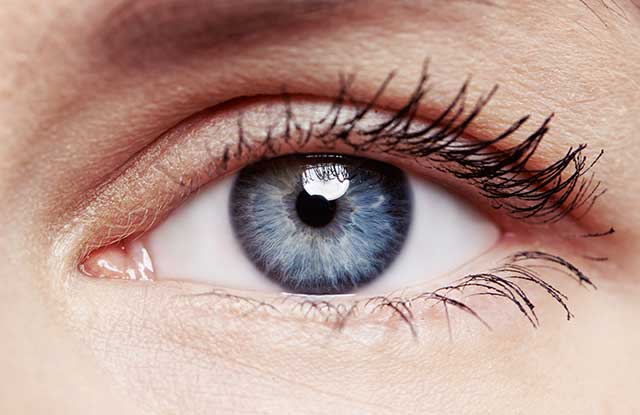 As mentioned earlier, spinach is a significant source of carotenoid compounds.

However, two of these compounds—zeaxanthin and lutein—are associated with specific health benefits for our eyes.

For instance, recent studies suggest that diets rich in these two compounds may protect against macular degeneration and other age-related diseases of the eye (26, 27).

Key Point: The carotenoids zeaxanthin and lutein may help us to maintain a healthy eyesight.

Concerns: Is Oxalate a Problem?

Most things in nutrition are neither black nor white. Just as spinach has many benefits, there are some potential drawbacks to consider too.

The main one of these is oxalate (otherwise known as oxalic acid), an organic acid that spinach contains in high amounts.

Spinach is one of the most concentrated sources of oxalate out of all food (28).

Unfortunately, some people are sensitive to this oxalate, and these individuals may develop kidney stones from a high-oxalate diet. Around 60% of kidney stones are found to contain oxalate (29, 30).

For individuals trying to limit food sources of oxalate, spinach is not a good fit.

However, realistic servings of spinach are not a problem for the majority of people, and many different foods also contain oxalic acid.

Although it is easy to find scare stories about “anti-nutrients” in vegetables, they are not a concern for most people.

Key Point: Spinach contains high amounts of oxalate and this can cause problems for a minority of people. However, most people do not need to worry.

Overall, spinach is a very healthy food that has a range of health benefits.

It is rich in vitamins and minerals, and it contains some other bioactive compounds that may further benefit our health.

Due to this leafy green’s impressive nutrient density, it can play an excellent role in a healthy diet.

For more on leafy greens, see this guide to the potential benefits of kale.