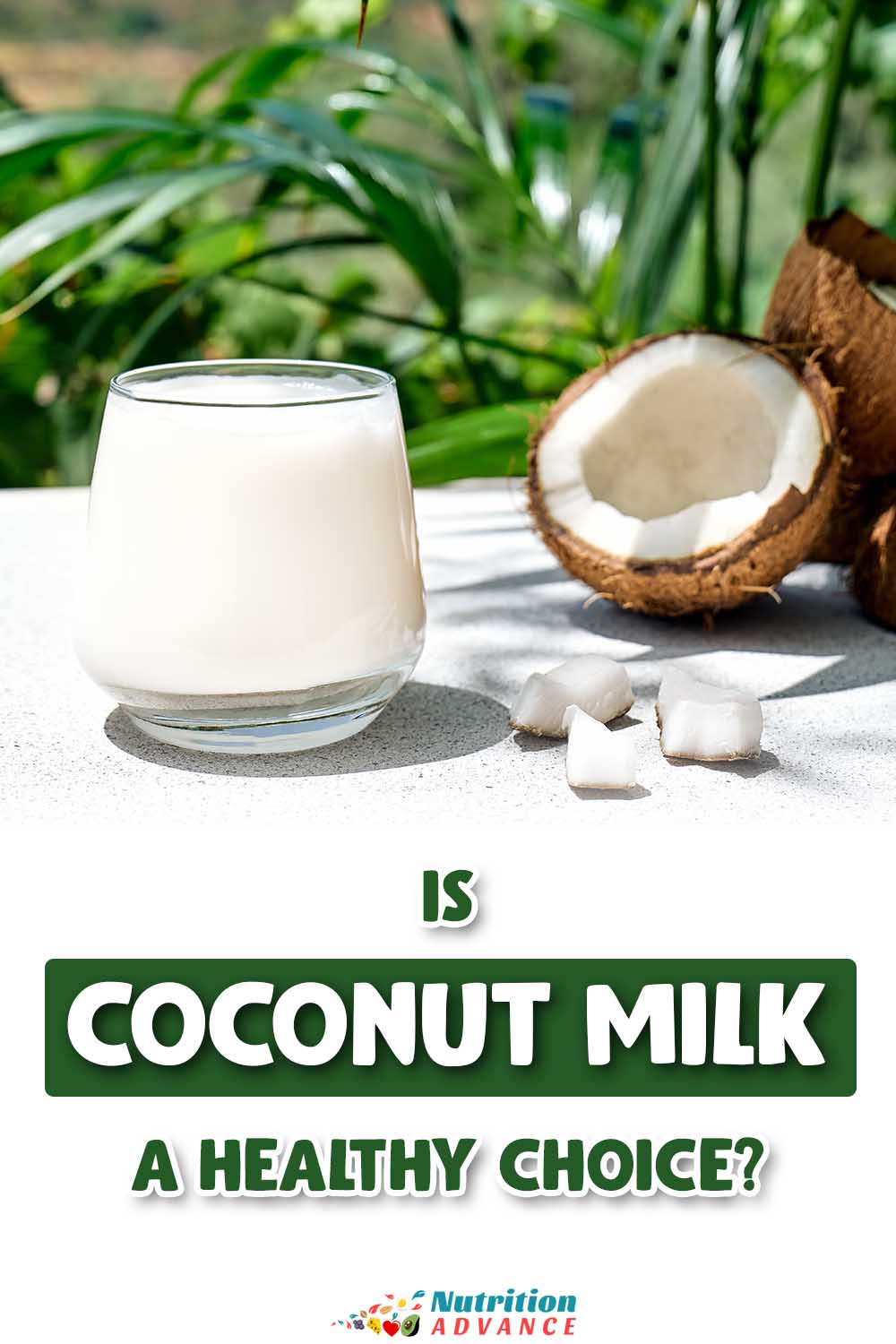 It tastes great and is an ingredient in a wide variety of dishes.

However, what does coconut milk offer nutritionally? And is it a healthy choice?

This article examines scientific research on coconut milk alongside its complete nutritional profile.

What Is Coconut Milk?

Coconut milk is a white liquid made by mixing grated coconut flesh with water.

In terms of appearance, the liquid resembles milk, and some people use (the light variety) as a replacement for dairy milk in drinks.

Coconut milk is popular as an ingredient in curries and stews and features extensively in Indian and South-East Asian cuisine.

This extensive list of dishes made using coconut milk provides more information on its culinary uses.

Most commercial coconut milk production occurs in tropical regions from freshly harvested coconuts. The major producers and exporters include Indonesia, Sri Lanka, Thailand, and the Philippines (1).

How Is Coconut Milk Made?

The commercial production of coconut milk is quite a simple process. Here is a summary:

Key Point: Coconut milk is a milk-like liquid made from grated coconut flesh. It features prominently in Indian and South-East Asian cuisine.

Nutritionally, the main components of coconut milk are water and fat.

Here you can find the total nutritional values for regular coconut milk per 15-gram tablespoon serving.

The source for nutritional data is the USDA’s FoodData Central database. Daily values have been calculated using USDA data and the recommended daily values from the FDA (2, 3).

In addition to its vitamin and mineral content, coconut milk contains some phytonutrients.

Phytonutrients, such as polyphenols, are bioactive chemicals found in plants that can affect the body (4).

According to research published in the International Journal of Food Science in August 2020, commercially available coconut milk contains the following polyphenolic compounds per 100 ml (5):

Coconut milk may have several benefits owing to its nutritional and culinary properties.

When visiting a popular coffee shop chain, it is common to see a non-dairy ‘coconut milk’ option.

Light coconut milk provides a smooth and creamy texture to drinks and does not contain lactose (milk sugar).

For this reason, coconut milk is a good dairy substitute for individuals with lactose intolerance or a vegan dietary preference.

However, it is worth pointing out that coconut milk is not the nutritional equivalent of dairy milk.

Key Point: Coconut milk is one of the best-tasting substitutes for dairy milk.

A Good Source of Minerals

People tend to consume coconut milk in relatively small serving sizes, so it is challenging to consume large amounts of nutrients from it.

However, gram-for-gram, coconut milk is a good source of essential minerals.

Key Point: Coconut milk is a good source of minerals.

In the study, rats with induced gastric ulcers appeared to suffer less inflammation and recover quicker when fed with coconut milk than a control (no treatment) and saline water (sham treatment) group.

These studies suggest coconut milk may have some gastroprotective properties. However, it is important not to take findings from small animal studies to imply the effect would be the same in humans.

In other words, more research in this area is necessary before making firm conclusions.

Key Point: Coconut milk may have gastroprotective properties, but there is limited evidence to support this.

As well as having benefits, coconut milk may also have downsides. Here is a quick summary of these potential drawbacks.

Coconut milk is a significant source of saturated fat, with a tablespoon (15g) serving providing 3.16 grams. This level of saturated fat is equivalent to 21.1 grams on a per-100-gram-basis (2).

High intake of saturated fatty acids can cause elevations in LDL cholesterol (LDL-C), which strongly correlates with an increased risk of cardiovascular disease (8, 9).

However, a 2013 study examined the effects of consuming coconut milk on LDL-C levels in sixty healthy adults (10).

Interestingly, the results of this study were not as expected. Instead, the study demonstrated that giving the participants coconut milk porridge (fat content: 23g) five days a week for eight weeks led to a significant fall in LDL-C levels compared to baseline (133.9 mg/dL to 119.0 mg/dL).

During an eight-week washout after the coconut porridge intervention, the participants’ LDL-C levels rose to 139.3 mg/dL.

Following this, providing the participants with soy milk porridge five days per week for eight weeks led to LDL-C levels falling (but less significantly than in the coconut porridge group) from 139.3 mg/dL to 127.5 mg/dL.

The study’s authors stated that the saturated fat content of coconut milk could not explain their study’s findings. Further, they speculated that other components of coconut milk, such as soluble fiber, may have influenced the unexpected effect it had on LDL in their study.

This is just one study, and more extensive and rigorous research is necessary to better understand coconut milk’s impact on LDL-C before concluding.

However, until then, caution should be warranted.

If looking for a milk option with lower saturated fat, other plant milk such as almond milk and skim dairy milk are both good alternatives.

Key Point: Similar to coconut oil, coconut milk is high in saturated fat, thus would be expected to increase LDL-C levels. However, the limited research on coconut milk does not show this effect.

All high-calorie foods can fit into a good overall diet when consumed appropriately.

However, high-calorie foods such as coconut milk tend to be easier to over-consume.

Key Point: Coconut milk is very high in calories, thus should be consumed in moderation.

Although rare, coconut allergy can have potentially serious consequences.

On this note, a 2021 retrospective review analyzed 275 records of patients showing coconut sensitivity at an allergy center in Chicago between 2002 and 2017 (14).

The review found that:

For this reason, any individual who suspects they may have an allergy to coconut should consult their medical team before consuming coconut milk.

While this article has focused on regular coconut milk, it is important to note that several coconut milk varieties exist.

The main difference between these coconut milk varieties is their fat content, and they include:

In the table below, based on USDA data, we can see the basic calorie and macronutrient composition of these coconut milk options per 100 grams (2, 16, 17):

The nutritional data shows that light coconut milk is much lower in carbohydrates, fat, and total calories.

As a result, it is far more suitable in larger serving sizes and for use in drinks compared to regular coconut milk.

The most common usage for coconut cream is using small amounts to thicken and flavor cooked dishes such as curry.

As mentioned earlier in the article, coconut milk is not the nutritional equivalent of regular dairy milk.

While the two are interchangeable based on preferences, this is not the case based on nutritional values.

Key Point: It is possible to use light coconut milk as a drink in the same way as dairy milk. However, these two options are very different nutritionally.

How To Use Coconut Milk

Here are some common ways to use coconut milk.

Coconut milk is a tasty and versatile ingredient, providing a good source of fiber and several minerals.

However, it is also relatively high in calories and saturated fat.

Coconut milk can fit into an overall healthy diet, but it is probably better to moderate its use and stick to recommended serving sizes.