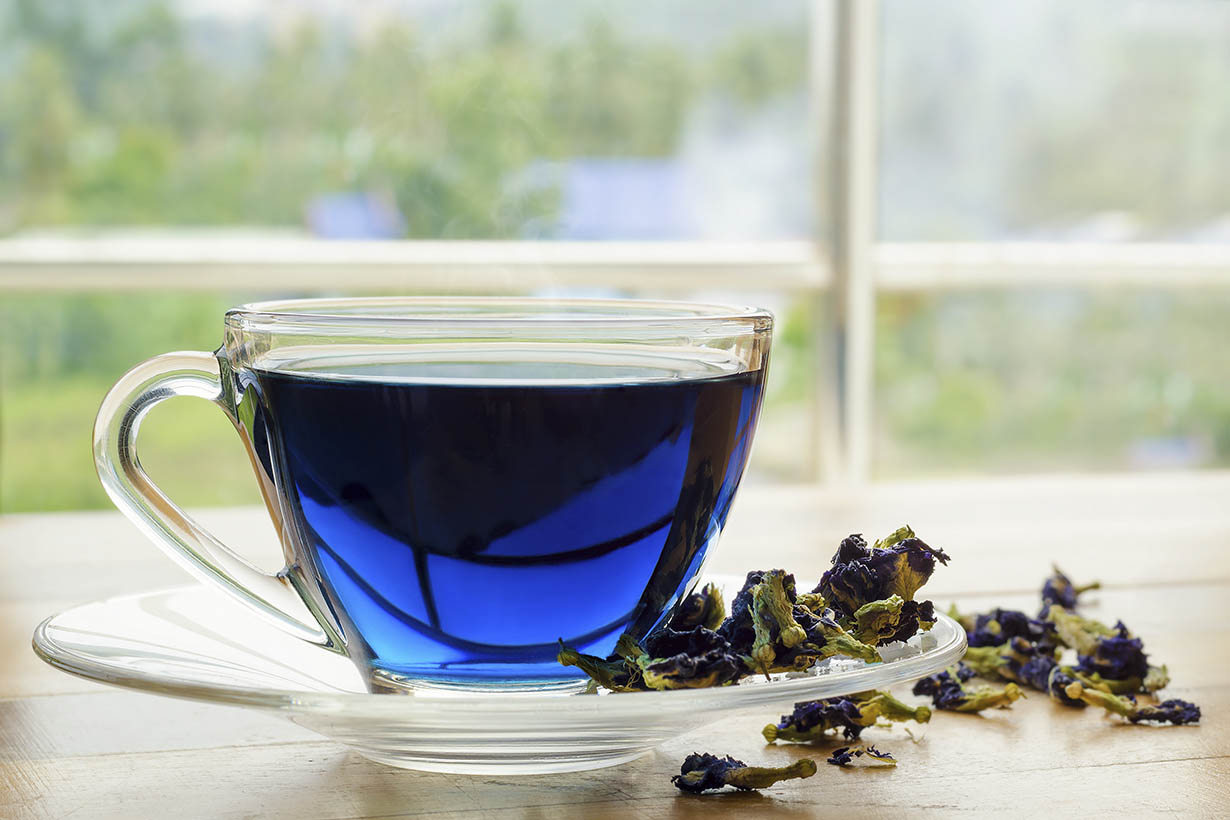 Polyphenols are a type of phytonutrient.

They are health-protective chemical compounds that are present in a variety of plant foods.

Firstly, unlike previously believed, these compounds are very unlikely to act as ‘antioxidants’ directly.

Recent research suggests they play an important role in cell signaling and up-regulating the immune system.

Polyphenols are part of the reason for the purported benefits of drinks like coffee, green tea, and red wine.

There are many foods high in polyphenols, such as blueberries, dark chocolate and herbs and spices.

However, this article takes a look at 13 drinks that are high in polyphenols, and some of them may be a little surprising. Coffee is one of the most popular drinks in the world, and it has a range of health benefits too.

We can attribute part of these effects to the caffeine content, which has a beneficial impact on mood, focus, and concentration (1, 2).

However, there is a host of chemical compounds — polyphenols — in coffee that have some research-backed benefits.

In fact, coffee is probably the single largest source of polyphenols in the modern diet.

Firstly, the polyphenols in coffee are a class known as phenolic acids. Two of the most significant of these are chlorogenic acid and caffeic acid. Red wine is another of the most significant (and best known) sources of polyphenols.

If you drink alcohol, it’s probably the healthiest choice of drinks too. Red wine contains a highly-concentrated variety of polyphenol classes, including phenols, anthocyanins, and flavanones (5).

Many different fruits contain polyphenols, and grapes are one of the most concentrated sources; wine concentrates these compounds even more.

Interestingly, there is a vast scope of research that suggests moderate red wine consumption may reduce the risk of cardiovascular disease (6).

Part of this could be because moderate alcohol intake increases insulin sensitivity and high-density lipoprotein (HDL) levels (7).

However, there is also evidence that polyphenols in red wine exert similar benefits.

For instance, in a randomized trial, de-alcoholized red wine had the same positive effects on insulin sensitivity as the full alcohol version (8).

[note_color=”#f4cfcf”]Key Point: Red wine is a tasty source of polyphenols, and providing that people consume it in moderation, it appears to be good for health.[/su_note] Black tea is trendy in the Western side of the world, particularly in the UK and Ireland.

It’s also quickly growing in popularity in the East, where it has traditionally been ignored due to green tea.

Black tea leaves are from the same plant as green tea, but they undergo a fermentation process which changes the properties of the leaves.

The primary polyphenols in black tea are catechins, flavonoids, theaflavins, and tannins.

A systematic review shows that black tea consumption lowers LDL concentrations, and significantly so in people with very high LDL-levels. At the same time, it does not affect HDL levels, and thus improves the HDL to total cholesterol ratio (9).

Key Point: Black tea is a very popular drink in the Western world, and it’s full of polyphenols too. Green tea is one of the most well-researched drinks on the planet, and it has been used medicinally in Chinese medicine for thousands of years.

There are several classes of polyphenols in green tea, and these include flavonoids and phenolic acids.

Among these, the most biologically active compound is epigallocatechin gallate, otherwise known as EGCG (10).

Numerous systematic and human studies show the beneficial effects this popular drink can have.

Some of these benefits include reducing inflammation, lowering blood pressure, and possibly decreasing cancer risk (11, 12, 13).

Green tea is a pleasant-tasting grassy tea, and it is much milder than black tea in strength.

Key Point: Green tea contains a significant amount of polyphenols, and it is one of the healthiest drinks in the world. The drink is a herbal tea made from the leaves of the Clitoria ternatea plant, which is native to Thailand and Malaysia.

The brilliant blue color of this tea comes from the concentrated source of anthocyanin polyphenols it contains.

It is a little difficult to find in Western countries, although you can buy it online from some places.

Lastly, just one thing to be aware of; ignore the weight-loss claims around this tea.

It’s important to realize that losing weight is all about a proper overall diet. There is no herbal tea that works as a miraculous weight-loss agent.

Key Point: Butterfly pea flower tea is high in anthocyanins, a type of polyphenol found in blueberries and other purple foods. Hibiscus tea is a slightly sweet, but mostly sour tea that has an attractive dark pink hue.

It’s an increasingly popular herbal tea, and the dried leaves contain a variety of anthocyanins (14).

Perhaps the most beneficial aspect of hibiscus tea is the blood pressure-lowering effect it has.

This particular benefit has been shown on numerous occasions, and a recent systematic review of randomized trials found hibiscus to lower both systolic and diastolic blood pressure (15).

Since blood pressure is one of the primary cardiovascular risk factors, this is an excellent benefit from simply drinking a cup of herbal tea. The simple reason for this is the tea leaves are ground into a fine powder, which tea drinkers consume.

As a result, matcha offers all the benefits of regular green tea but in a far more concentrated form.

Matcha has quite a bitter taste, and it is also popular to drink it as a (heavily sweetened) latte.

For the health benefits, just stick to the pure tea. Perhaps the most surprising drink on this list is whiskey.

Many people know that wine contains a range of polyphenols, but few realize that whiskey does too.

Commercial whiskey has been found to contain several polyphenols including; carboxyl ellagic acid, gallic acid, ellagic acid, and the creatively named “whiskey tannins A and B” (17).

Key Point: Whisky is a surprising source of polyphenols. Like all alcohol, there may be some benefits from light to moderate drinking. However, alcohol can be very harmful at higher doses.

Perhaps surprisingly, beer is another drink full of these compounds.

In fact, beer contains many polyphenol classes such as flavanols, flavones, flavonols, phenolic acids and more. Darker beers such as stout tend to provide the most polyphenols (20).

Recently, a randomized trial examined the effect of beer polyphenols (660 ml beer) in 33 male participants with high-risk of cardiovascular disease.

Markedly, the results of the trial demonstrated that phenols in beer reduced leukocyte adhesion molecules and inflammatory biomarkers of health (21).

All this said, remember that beer attracts the nickname of ‘liquid bread’.

While an occasional drink might be okay for some, regular drinking binges are unhealthy. We can buy lemongrass as a dried herb that is mainly used to make a citrusy-tasting tea.

It is also popular in South-East Asian cuisine, and many dishes use the herb for flavoring curries and soups.

The herb contains a wealth of polyphenols such as chlorogenic acid (also found in coffee), isoorientin, and swertiajaponin (22).

Unfortunately, there are not many clinical trials for lemongrass involving humans.

However, one study in mice showed that lemongrass polyphenols support gastrointestinal health, protecting against damage induced by alcohol and aspirin (23). Lavender tea has been popular in the Western world since the 1600’s when Queen Victoria’s love for it made it a popular choice.

The drink has a pleasant aroma and a mildly sweet taste.

Lavender tea is made from dried flower buds, and these buds are rich in flavonol and flavonoid polyphenols.

Only a few studies look into the effects of lavender, but in one animal study, high-strength lavender extract improved the LDL/HDL ratio and reduced the triglyceride to HDL ratio (24).

Additionally, there have long been claims for lavender aiding insomnia and stress.

This is supported by a range of human and animal studies show that a lavender oil extract results in a quicker onset of sleep (25).

That said, it’s worth remembering that these are high-strength extracts and the tea won’t be anywhere near as powerful.

Key Point: Lavender is rich in polyphenols, but the purported health benefits have only been shown with high-strength extracts. Oolong is a type of tea that falls somewhere between green and black.

For example, the tea is oxidized in the same way as black tea but for a shorter length of time, and the leaves remain (dark) green.

As a result, oolong tends to share a mix of characteristics from black and green tea. They share the same polyphenols too, and oolong has been found to contain at least 54 different compounds (26).

The mechanism for this effect may be through increasing insulin sensitivity, thereby stimulating increased uptake of glucose in adipocytes (fat storage cells) (28).

Key Point: Like all true tea, oolong contains a variety of polyphenols, and it has several beneficial health effects. Cocoa is one of the most polyphenol-rich foods in the world.

There is a wide range of human studies that show cocoa polyphenols to have some compelling health benefits too.

Cocoa is also one of the most significant sources of iron and magnesium out of all foods (31).

If you’re thinking of a sweet hot chocolate, then that’s the wrong kind of drink though.

For the full health benefits, stick to minimally-sweetened cocoa.

Key Point: Cocoa is extremely mineral-rich and it is packed with polyphenols.

There are many polyphenol-rich drinks out there.

As mentioned earlier, the idea of polyphenols acting as magical antioxidants is unrealistic.

However, all of these drinks contain different polyphenols which appear to have a positive impact on health and immunity.

Overall, including several of these drinks each day is likely to have beneficial effects on health.

This is particularly the case if they are replacing sugar-laden drinks such as soda and fruit juice.

For more on polyphenols, see this guide to flavonoids.

Does it matter if you drink the teas hot or cold?

No, whether the tea is hot or cold shouldn’t make any difference.

It’s interesting that these don’t act as antioxidants directly. That goes to show how much we’re still learning about health and nutrition.

Thanks, Janet! Glad you liked it. The Blue Chai tea has an interesting taste, but the appearance is the best thing about it!