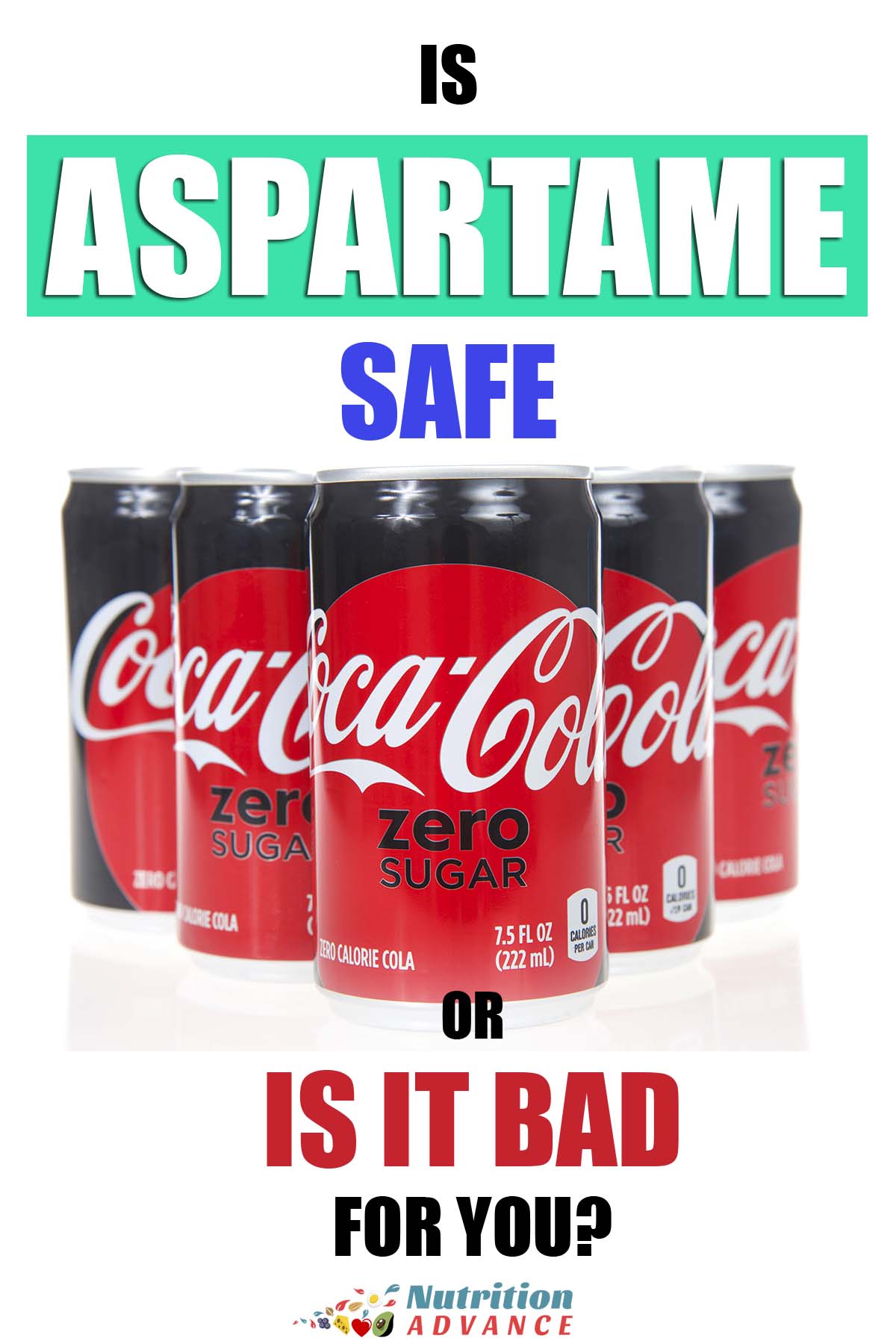 Reading media headlines about aspartame can be very confusing.

One month the sweetener is perfectly safe, the next it is linked to some scary health condition or another.

However, what does recent research on this artificial sweetener show?

This article will stick to the facts and summarize the current science in plain English.

Aspartame is one of many available sweeteners on the market.

This sweetener is mainly used for giving low-calorie, sugar-free foods and drinks a sweet taste.

Aspartame was approved for use in food back in 1981 by the Food and Drug Administration (FDA), and it has been a controversial food additive since that time (1, 2).

As an artificial sweetener, aspartame is of synthetic origin, meaning that it was made in a laboratory.

Producing these two amino acids requires the use of two types of bacteria; Brevibacterium flavum and Corynebacterium glutamicum. These bacteria are added to a tank containing all the things they need to grow, such as sugars and sources of carbon and nitrogen.

Once a large enough amount of bacteria is present, they are moved to a fermentation tank where they ferment/produce the amino acids aspartic acid and phenylalanine.

At this point, producers use a centrifuge to separate the amino acids from the bacteria.

Following this, the amino acids undergo a crystallization and drying process. Next, phenylalanine is mixed with methanol to produce the compound L-phenylalanine methyl ester.

After aspartic acid undergoes a modification of its own, the two amino acids are then left to mix in a reactor tank. During this process, the amino acids are heated, cooled, filtered, and dried.

Finally, the resulting compound is mixed with acetic acid to convert it into aspartame. The full (and more detailed) production process of aspartame is available here.

Key Point: Aspartame is a synthetic artificial sweetener. It is made by chemically combining the amino acids aspartic acid and L-phenylalanine.

What Is the Acceptable Daily Intake For Aspartame?

The ‘acceptable daily intake’ (ADI) is an estimate of the safe amount of a substance for daily consumption over a lifetime.

In other words, if consumers stay under the ADI for aspartame, there should theoretically be no risk of harm (according to those who set the ADI).

According to the FDA, aspartame has an ‘acceptable daily intake’ (ADI) of 50mg per kilogram of body weight.

Elsewhere, the ADI is slightly stricter, and the World Health Organization (WHO) and European Food Safety Authority (EFSA) advise a maximum of 40mg per kilogram of body weight for aspartame (3, 4).

Using the EFSA’s lower 40 mg ADI, this infers that an individual weighing 60 kilograms could safely consume 2,400 mg of aspartame daily.

For the record, one standard can of diet coke contains about 125 mg of aspartame (5).

Key Point: According to the FDA and EFSA, relatively high amounts of aspartame are safe. The ADI is equal to approximately 20 cans of diet coke.

Is Aspartame Safe Or Is It Bad For You?

Many people—including the FDA—believe that aspartame is safe.

On the other hand, there are also individuals who believe aspartame may have adverse effects on health. For instance, some influential Internet voices claim that aspartame is a “toxic” and dangerous substance.

There are also thousands of articles on the dangers of aspartame on the Internet.

However, many of these sources mostly pick negative (primarily animal) studies to suit the narrative of the story rather than fairly looking at both sides.

This seems to be a common theme with all artificial sweeteners rather than aspartame alone, and sweeteners like sucralose are also hotly debated.

Why Do Some People Think Aspartame Has Dangers?

Common concerns people have about aspartame relate to the compounds it breaks down into within the body.

These breakdown constituents include;

A common claim from those who are suspicious about aspartame is that high levels of aspartic acid may be capable of having a neurotoxic effect. Additionally, methanol is a toxin and formaldehyde is a known carcinogen, which also gets a lot of attention (6).

However, it is worth noting that the amounts of methanol present upon digestion of aspartame are minimal.

Here are some of the more recent and in-depth studies on aspartame.

This was a systematic review of 56 studies, and some of the findings of the analysis were;

This systematic review on artificial sweeteners included four papers that focused on aspartame and its potential gastrointestinal effects.

These studies showed that;

This was a systematic review of 29 randomized clinical trials (human participants).

The analysis demonstrated that;

This was a systematic review of 10 studies that provided complete histopathology (disease-related changes to body tissues).

The purpose was to analyze the potential carcinogenic effects of aspartame from animal feeding studies.

Here are the findings;

This systematic review examined studies looking at links between artificial sweeteners, including aspartame, and cancer.

The findings of this review related to aspartame included;

The specific findings on aspartame are listed below;

For an individual weighing 70 kg, the high-aspartame diet would be equivalent to 1750 mg of aspartame (14 cans of diet coke) per day.

Is Aspartame a Safe Sweetener?

Based on the systematic reviews and clinical trials listed in this article, here is a summary of the findings;

Overall, the majority of the evidence for harm from aspartame comes from animal studies using extremely high doses of the sweetener.

Additionally, the general consensus from systematic reviews is that there is no evidence of aspartame’s carcinogenicity in humans.

However, some individual studies do find associations between specific health conditions and aspartame, but the evidence for this is conflicting, and an association does not automatically imply causation.

At this point, the totality of the evidence from large review studies suggests that aspartame is safe at human consumption levels, and there is no strong evidence to suggest otherwise.

That said, I think it is difficult to categorically state that aspartame is 100% safe, and the fact human trials are ongoing probably demonstrates that more research is deemed necessary.

Here are some extra considerations about aspartame and the use of artificial sweeteners.

PKU is a genetic and inherited condition that results in the inability of an individual—from birth—to break down the amino acid phenylalanine. As a result, phenylalanine can build up inside the body to potentially harmful levels (8).

Since phenylalanine is one of the compounds that aspartame breaks down into, aspartame intake should be avoided (9).

For anyone who wishes to avoid artificial sweeteners like aspartame, it could be worth looking into a class of sweeteners called sugar alcohols.

While there are potential gastrointestinal distress issues at higher doses, sweeteners like erythritol have consistently shown no evidence for carcinogenicity in human or animal studies.

For more information on aspartame, here are some useful resources;

Appreciate this guide a lot. Thank you.

Nice bit of product placement…how much was in the brown envelope?

Firstly, this site has never received money or any other type of compensation for an article.

This one looks at the positives and negatives of aspartame based on larger systematic reviews and controlled trials over the past 5 years, most of which were free of industry funding.

I think looking at the pros and cons from larger studies is better than cherry-picking only negative smaller-scale studies. The larger ones already take those into account when looking at the totality of the evidence.

What about the simple fact that it makes food taste abhorrent?

Well, disliking the taste would certainly be a good reason to avoid it!