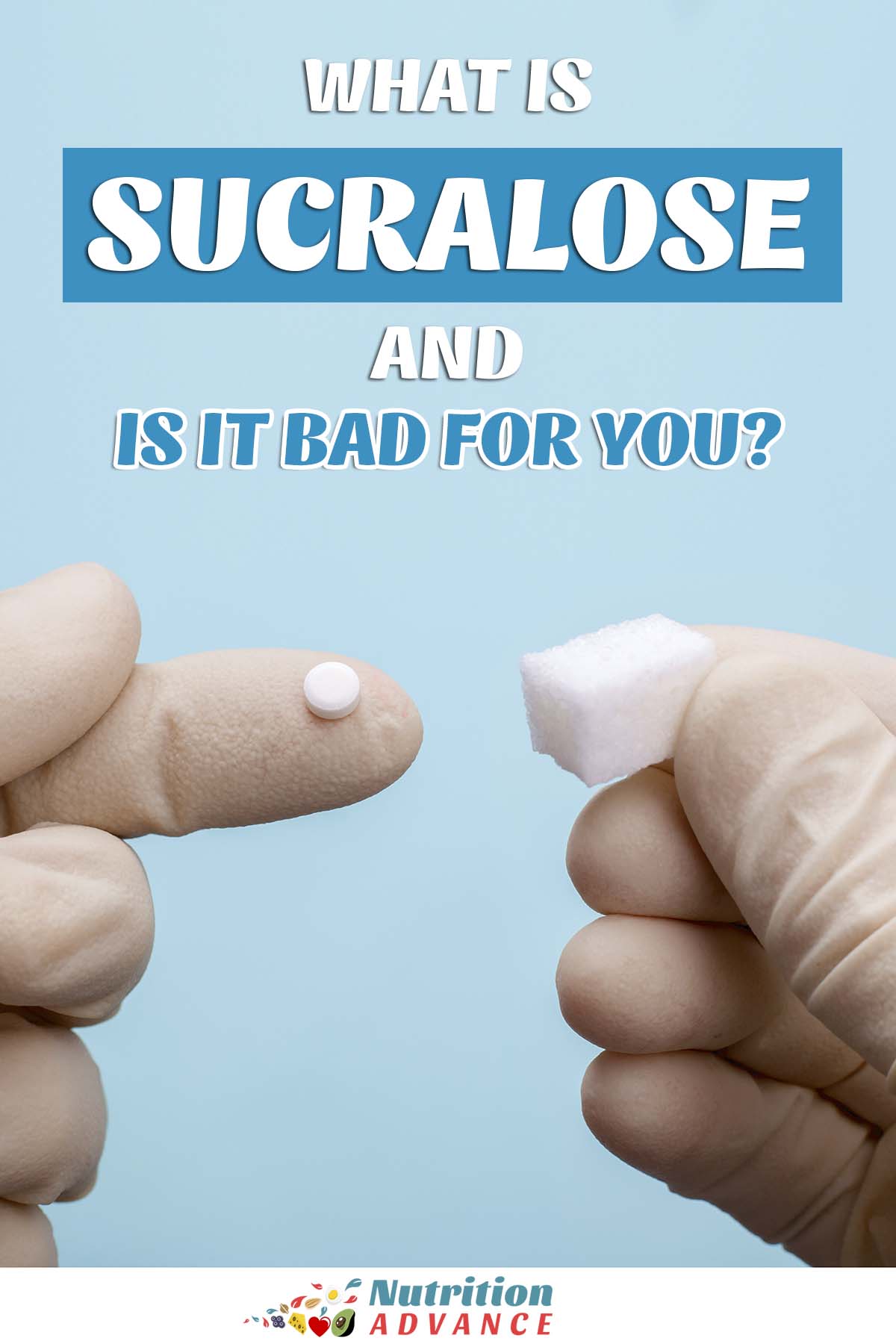 Sucralose is one of the most popular artificial sweeteners in the world today.

However, despite the FDA approving sucralose as safe, some people still feel otherwise and have concerns over the sweetener’s safety.

But what does the science say?

This article provides an evidence-based guide to the safety profile of sucralose. 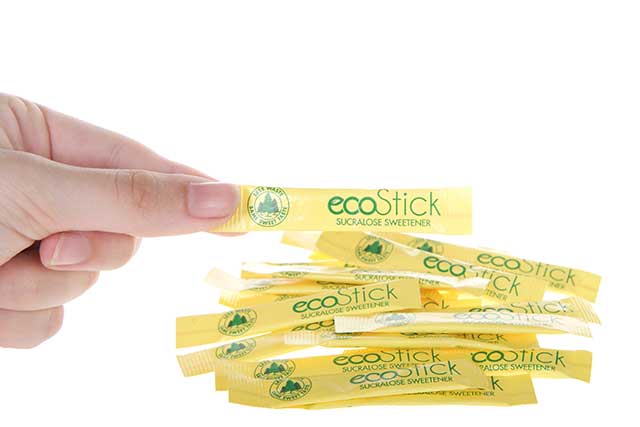 Sucralose is an artificial sweetener made by the chlorination of sucrose, otherwise known as table sugar (1).

For some people, sucralose might be more recognizable by the popular brand name ‘Splenda.’

However, this can be a little bit misleading. The truth is that sucralose offers more concentrated sweetness and only small amounts are necessary, but an average serving is not noticeably sweeter than regular sugar.

The FDA approved sucralose for use in the United States in 1998 and approval from the European Food Safety Authority followed in 2004 (3).

Sucralose has a variety of uses, and it is a common ingredient in low-sugar/sugar-free commercial products, chiefly soft drinks.

The FDA set an ‘adequate daily intake’ (ADI) for sucralose of 5mg per kilogram of body weight.

For a person weighing 60 kilograms (132 pounds), this ADI is equivalent to 23 packets of sucralose per day (4).

The ADI refers to the (predicted) maximum amount of a food additive that people can safely consume daily over their lifespan.

Similar to other artificial sweeteners such as aspartame, there is a certain amount of controversy surrounding sucralose.

For instance, if you do a quick search on Google, you will find lots of articles discussing how sucralose is harming our health.

However, is there a scientific basis for these claims?

We will now look at this issue in depth and provide a balanced overview of the totality of the evidence.

Key Point: Sucralose is a popular artificial sweetener, but some people feel it can have adverse health effects.

LD50 is an abbreviation for ‘lethal dose for 50%’, which means it is the amount that can kill 50% of people/test subjects consuming the compound.

Studies on mice and rats suggest that sucralose has an LD50 above and beyond 10-16 grams per kilogram of body weight. In other words; these doses were not lethal in the existing studies (5).

Since a packet of Splenda contains only 12 milligrams of sucralose, a lethal dose is realistically impossible in humans (6).

Additionally, studies show that daily sucralose intake of 900 mg per kilogram of body weight (or 75 packets of Splenda per kg) has no negative effects in dogs over 12 months (7).

Key Point: Based on animal studies, there is little realistic concern of sucralose toxicity in humans.

There has been some speculation that non-nutritive sweeteners like sucralose may affect appetite due to their sweet taste.

Interestingly, one mouse study appears to support this. The study found that when the mice were fed more sucralose, they started to eat more, and their total food intake increased (8).

However, the mice in this particular study were fed 7.5 mg of sucralose per day.

As previously mentioned, the adequate daily intake for sucralose in humans is 5 mg per kilogram of body weight.

Additionally, there do not appear to be human trials that support the theory that sucralose can increase appetite.

Key Point: Megadoses of sucralose may potentially increase appetite in animals. However, there is nothing to suggest the same is true for regular doses in humans.

Several clinical trials have looked at the effect of sucralose on human subjects.

In a 12-week clinical trial, participants consumed either a large amount of sucralose (333.3 mg) three times per day or a placebo. The results found that the sucralose group had no statistically significant changes to glucose, insulin, C-peptide, and HbA1c levels (11).

However, one study suggested that sucralose could affect insulin sensitivity. This study was a randomized controlled trial that investigated the effect of daily sucralose intake (at 15% of the ADI) for 14 days in healthy adults.

Since the study participants had a sucralose intake of 15% of the ADI, we can also calculate how much they consumed.

For a 60-kilogram person, the ADI (5mg per kilogram) would be 300 mg of sucralose. 15% of this amount would, therefore, equal 45 mg of sucralose (about four packets of Splenda).

The researchers noted that further, more extensive studies need undertaking in this area.

A further small study found that sucralose can lower blood glucose when combined with carbohydrates in healthy subjects. However, this effect didn’t occur in patients with type 2 diabetes (13).

There was a lot of negative press about sucralose in 2016.

The reason: a study claimed that sucralose leads to significant increases in cancerous tumors in mice over their lifespan (14).

However, a closer look at this particular study shows that we should take the claims with a grain of salt. One reason for this is because, once again, the mice received what can only be called megadoses of sucralose.

For anyone who clicked on the above study; it doesn’t initially make clear how much sucralose the mice were fed each day. However, in an interview, the researchers admitted that the dose was 60 mg per kilogram of body weight – which is 5x the acceptable ADI for humans.

Furthermore, the study itself reported that these (slight) increases in cancer occurred in male mice, yet neglected to say that there was a dose-dependent decrease in cancer risk for the female mice.

In other words; the findings were not statistically significant, and in some of the mice groups there was a reduced risk of cancer. Also, according to numerous sources, the research institute involved has a history of making controversial claims about artificial sweeteners.

What Do Other Studies Say?

In a review of the human studies on sucralose, researchers found that sucralose exhibits no carcinogenic activity even in extremely high doses (15).

A further review found that some toxicity effects were present when using very high doses in (a minority of) animal studies, but these were at unrealistic doses for human intake. Additionally, the majority of studies showed zero effects (16).

Lastly, a 3-month randomized, double-blind clinical trial in human participants showed no signs of toxicity or carcinogenic effects. The doses used in this study were above the maximum ADI (17).

Key Point: The vast majority of studies find that sucralose does not exhibit carcinogenic properties. Additionally, there is no evidence of any carcinogenic potential in human studies.

On the potentially negative side, some (animal) studies suggest that sucralose may induce changes to gut microbiota – the “good bacteria” that colonize our digestive system (18).

In one study, beneficial gut bacteria decreased by 50% when rats were fed between 100 and 1000 mg sucralose per kg of body weight (19).

Again, it is worth remembering that the ADI for humans is only 5 mg per kilogram, so these were extremely high doses.

In a further study, sucralose added to drinking water at 1-35 mg per ml caused gut dysbiosis in mice (20).

Once more, these are high doses compared to realistic human consumption.

At this point, there do not appear to be any studies on sucralose and gut health in human participants.

Hopefully, researchers will do some human clinical studies in this area in the future.

Key Point: High doses of sucralose appear to have an adverse impact on gut bacteria in rodent studies.

There does not appear to be any research linking sucralose to weight gain.

Is It Safe To Heat Sucralose?

Some recent studies suggest that exposing sucralose to high temperatures may cause the sweetener to degrade and release byproducts such as chloropropanols (21, 22).

At present, the scientific understanding of chloropropanols in food is relatively poor, but they are thought to have “toxic potential as carcinogens” (23).

Certain chloropropanols are thought to be of “low concern” for human health, and “limited data” prevents an accurate risk assessment of others (24).

In early 2019, the German Federal Institute for Risk Assessment (BfR) released a report warning about sucralose. In this report, they mentioned that heating sucralose to temperatures of 120°C – 250°C (248-482°F) might cause the formation of these potentially harmful chloropropanols (25).

Additionally, they recommended that consumers don’t bake with sucralose until a conclusive risk assessment has been completed.

In reply, the International Sweeteners Association stated that the BfR findings were “inconsistent with the significant body of scientific evidence demonstrating that sucralose is safe for use in foods and beverages” (26).

Overall, there is very little research on chloropropanols and sucralose. That said, those who prefer to err on the side of caution may wish to avoid baking with the sweetener.

Key Point: There are some potential concerns over heating sucralose to high temperatures. However, there is currently no evidence that this is harmful.

Overall, the existing evidence on sucralose from human studies suggests that it is a safe sweetener with few side effects.

Toxicity studies show that sucralose appears to be safe in humans, even at doses exceeding the recommended daily amount.

Very high doses of sucralose have shown adverse effects on the gut microbiome in rodent studies. Concerns have also been raised over the potential generation of harmful breakdown products when heating sucralose.

But at this point, other than some recent mixed studies on insulin sensitivity, there is no strong evidence to suggest that sucralose adversely affects human health.

As a non-caloric, sugar-free sweetener, it is also likely that many people could benefit from sucralose compared to regular sugar intake.

For more on sweeteners, see this review of allulose – one of the newest sweeteners to market.

I have used Splenda for 7 years and have experienced no negative effects whatsoever! I have lost 80 pounds thanks to Splenda and a Ketogenic Diet! And I have perfect digestive and elimination! And I do not crave sweets!

That’s great! Glad to hear it works well for you.