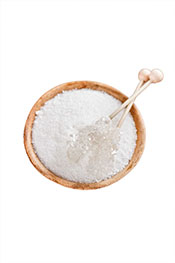 Erythritol is one of the most popular sweeteners in the world right now.

There are good reasons for this too; it tastes similar to sugar, contains virtually no calories, and it has zero effect on blood sugar and insulin levels.

Additionally, it doesn’t compromise our dental health like sugar can.

However, the big question; is this sweetener a healthy option?

This article analyzes the evidence and discusses the benefits and drawbacks of using erythritol.

Erythritol is a sugar alcohol (otherwise known as a ‘polyol’) that we can derive from sugars and starches in plants. The most common food these sugars are extracted from is corn.

Don’t worry about the “alcohol” in the name; sugar alcohols contain no ethanol, and they are entirely different from alcoholic drinks.

Sugar alcohols are prevalent in the food and oral hygiene industries, and they can be found in everything from chewing gum and toothpaste to diet soda.

Erythritol is most commonly used as a low-calorie, sugar-free sweetener in food and drinks.

While regular table sugar contains four calories per gram, one gram of erythritol only contains (approximately) 0.2 calories. In other words; erythritol contains less than 6% of the calories that sugar does (1, 2).

Erythritol has approximately 60 to 70% of the sweetness of regular sucrose (3).

Key Point: Erythritol is a low-calorie sweetener most commonly derived from corn.

How Is Erythritol Made? 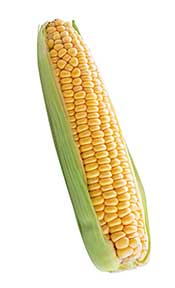 The manufacturing process of erythritol is relatively simple but requires several different steps.

Firstly, producers extract the starch from the raw material (usually corn), and this undergoes a process known as enzymatic hydrolysis.

In plain English, this means that enzymes are used on the starch to break it down into glucose.

Following this, the producers mix glucose with a type of bacterial yeast, which kickstarts a fermentation process.

There are several different yeasts that producers may use, and these include Moniliella megachiliensis, Candida magnolia, and Yarrowia lipolytica (4).

The fermentation process turns the glucose into erythritol, which is then heated to kill the yeast and washed to cleanse it of impurities.

Lastly, the erythritol is purified before undergoing crystallization into a solid form.

For anyone with interest in a sciencey technical breakdown of erythritol production, see here.

Key Point: Starch is broken down into glucose and then fermented to make erythritol.

Studies confirm that erythritol has no effect on blood-glucose and triggers no insulin response (5).

Additionally, more than 90% of the erythritol that we consume resists digestion and is excreted in the urine (6).

This is unlike some other glycemic sweeteners like maltitol.

One of the problems with several different sweeteners is that they don’t quite taste like sugar, and they can taste slightly bitter.

Stevia is a typical example of this, and many people dislike the strong aftertaste it has.

On the positive side, erythritol has a clean, sweet taste with no bitter aftertaste.

3. Well-Tolerated Compared To Other Sugar Alcohols 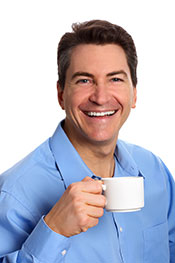 Sugar alcohols can sometimes lead to side effects such as bloating, gas, and other signs of digestive discomfort.

While this usually depends on the person and the specific dose, it is fair to say that these side effects are not uncommon.

The science confirms this too.

In this study, seventy healthy adults consumed either 20, 35, or 50 grams of erythritol on separate days. Following a wash-out period of seven days, this same group then consumed equal amounts of xylitol.

The table below summarizes the results (7);

As the table shows, erythritol is well-tolerated in everyday, realistic doses.

In this particular study, there were no symptoms of gastrointestinal distress at doses of up to 0.73 g per kg of body weight (8).

Key Point: Moderate amounts of erythritol do not cause symptoms of digestive distress.

Surprisingly, erythritol is not only not “bad” for our teeth, but it also has some beneficial effects on dental health.

Firstly, when we consume regular sugar, bacteria in our mouth (such as streptococci) break it down into lactic acid. This creates an acidic environment in the mouth which can damage tooth enamel over time (9).

Secondly, these bacteria use sugar to produce a sticky substance that forms plaque around the teeth. Plaque is the precursor to tooth decay, so excessive intake of sugar has strong links to poor dental health (10).

How is Erythritol Different?

The main positive about using erythritol is that no oral enzymes or bacterias can break it down. As a result, it does not “feed” the bad bacteria in our mouth.

Furthermore, research shows that erythritol can even promote dental health;

Key Point: Erythritol is not detrimental to oral health – it can even improve it. 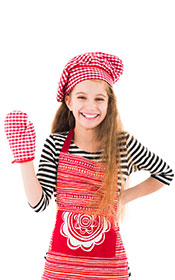 Erythritol exhibits good heat stability up to a temperature of 180°C (14).

On this note, a recent study investigated the effect of replacing sugar with erythritol in Danish cookies.

Interestingly, in a food preference test, there were no apparent preferences regarding the taste, texture, sweetness and “overall liking” between sugar and erythritol (15).

Since erythritol is stable at moderate heat, this makes it a good option for low-carb or sugar-free baking.

Key Point: Erythritol is suitable for cooking and baking – provided the temperature is 180°C or below.

Although using this sugar alcohol has several nice benefits, there are also a few drawbacks to note.

However, the potential for side effects is much reduced compared to other sugar alcohols like sorbitol.

As we discussed earlier, erythritol is relatively well tolerated.

However, that does not mean it cannot have side effects.

In large doses, the sweetener can cause gastrointestinal issues, and as previously mentioned, it can cause nausea at doses of 50 grams or above (7).

This seems to be a common occurence with sugar alcohols: higher doses can potentially cause digestive issues.

2) May Be Detrimental For Low-FODMAP Diets 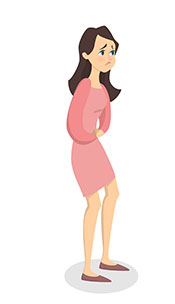 In plain English, these four compounds are short-chain carbohydrates that we cannot fully digest, and hence they ferment in the intestines. This can cause a variety of symptoms such as bloating and gas, which can cause discomfort.

Low-FODMAP diets are a common intervention that can help to ease the symptoms of irritable bowel syndrome (IBS) and other digestive issues.

Unfortunately, erythritol is a type of polyol, and hence a (small) source of FODMAPs (16).

Further to this, a randomized study found that combining erythritol and fructose (e.g. fruit) led to gastrointestinal issues in otherwise healthy adults, and it increased carbohydrate malabsorption (17).

For these reasons, erythritol may not be suited to a low-FODMAPs diet.

Key Point: Sugar alcohols can contribute to gastrointestinal symptoms when mixed with fructose, and it may not be the right choice for low-FODMAP followers.

There is some initial evidence that sweet taste may exacerbate cravings for sweet foods, thus increasing the risk of overeating.

Most of these studies have involved artificial sweeteners such as aspartame and saccharin.

To put it simply; research suggests that the artificial sweet taste may cause us to seek out food since we never receive the “expected” energy from the calorie-free sweetener.

Unfortunately, there is little research in this direction on erythritol. The only thing we have is anecdotal accounts from people who use it.

However, some people do claim that this sugar alcohol causes them to feel hungrier, so in the absence of anything more concrete, it is just something to be aware of.

If you are trying to cut down on sugar and erythritol doesn’t feel like the right fit, then there are a few other options out there.

First of all, stevia is a good calorie-free option.

Another option is monk fruit; it can be a little bit more expensive, but it is one of the more pleasant-tasting sweeteners.

To sum up; this sugar alcohol has no impact on blood glucose and insulin levels, it can improve our dental health, and it tastes pretty good too.

The only thing to watch out for is the potential for adverse gastrointestinal symptoms at high doses.

That being said, it is unlikely that people will consume high enough amounts for these issues to arise.

Overall, there are a lot of reasons to support the use of erythritol, and even more so if it is replacing regular sugar.

For those who enjoy using erythritol, Swerve Sweetener is another potential option. This sweetener uses a base of erythritol in addition to several other ingredients to try and replicate the taste of sugar.

Do we know what happens when erythritol is heated over 180 degrees?

From what I’ve read, it just melts and the erythritol’s effect on taste/texture disappears. As far as I’m aware, it doesn’t break down into anything harmful.

What is the ratio for monk fruit to replace the sugar?

All the info says monk fruit can be used as a 1:1 sugar replacement. I noticed that some people find this a little sweet though, so it may need adjusting a little depending on your taste preference.

Of course, it’s probably better not to feed it to our pets, but I suppose we can use it more comfortably than Xylitol, which is very risky for pet owners.

Where can erythritol be purchased?

You may be able to find it in a local supermarket/grocery store like Whole Foods.

If not, a local health store may have it.