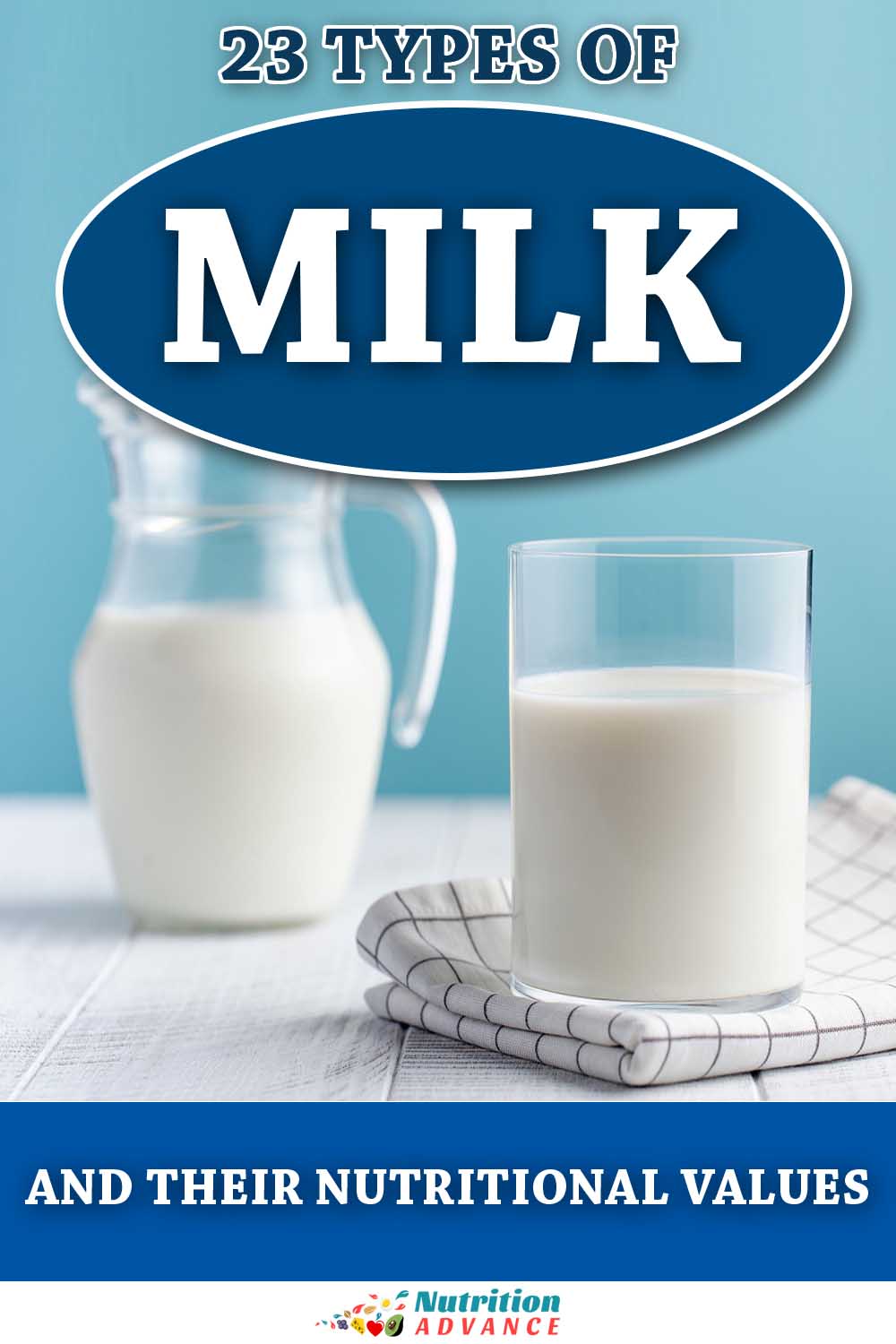 There are many different types of milk available.

The available varieties include numerous types of dairy milk and plant-based milk options.

This article examines each common variety of milk and its nutritional values. We will also compare some of the pros and cons of the available options.

What Counts As Milk?

If we wish to define milk, among the various definitions within the Oxford English Dictionary, there are two of importance:

Definition 1a accurately describes dairy milk products, such as whole milk and buttermilk.

Definition 5a can refer to various plant-based milk options, including almond milk and soy milk.

Let’s now look at the available dairy and plant-based milk options and their nutritional properties.

There is a wide range of dairy milk products, including milk of differing fat levels, flavored milk, and more.

Since it has a higher fat content than most other milk products, whole milk also contains more calories.

On the positive side, it has a fuller and creamier taste than reduced-fat options.

Whole milk is typically 3.25% milkfat within the United States, but this may change depending on the country.

For instance, whole milk in the United Kingdom has a milk fat content of 3.5% (1).

Here are the nutritional values for a regular 246-gram cup of whole milk (2):

See here for an evidence-based guide to whole milk.

Outside of the United States, in countries such as the United Kingdom and Australia, similar milk products may also take the name of ‘semi-skimmed milk.’

2% milk contains fewer calories than regular whole milk, and it tastes more like whole milk than milk options with even lower fat levels.

As its name may suggest, 1% milk has a milkfat content of 1%.

As a result, the milk has a less creamy taste and contains significantly fewer calories.

A regular 245-gram cup of 1% milk has the following nutritional properties (4):

As a result, it tends to be an excellent protein source as the protein to calorie ratio is very high.

However, it has a much more watery consistency than whole milk, and it does not have a creamy taste. For this reason, many people find it doesn’t compare well in terms of taste.

The nutritional values per 245-gram cup of skim milk are as below (5):

For more on skim milk and its nutritional properties, see this article.

These breeds were originally from the Channel Islands, but they now produce milk in countries around the world.

Compared to milk from cattle that most milk comes from (Holstein Friesians), whole milk from Jersey and Guernsey cattle has a higher fat and protein content.

For this reason, the milk has a slightly thicker consistency and a much creamier taste.

One 245-ml cup of Channel Island milk will offer the following nutritional values (6):

While there are many different flavored milk options, chocolate milk is arguably the most common option.

Interestingly, chocolate milk provides a slightly higher amount of minerals than regular milk due to its cocoa content (7).

Although the ingredients can vary, chocolate milk is usually a combination of dairy milk, cocoa powder, sugar, and sometimes thickeners.

A 250-ml cup of chocolate milk offers these nutritional values (7):

See this in-depth guide to chocolate milk for more information.

Half and half is a combination of whole milk and cream.

As the name implies, half and half contains 50% whole milk and 50% cream.

Half and half is often used in the kitchen for making soups and sauces rather than being for drinking.

The product can be a good compromise when cream is too heavy, and milk is too light for a particular dish or usage.

A regular 242-gram cup of half and half has the following nutritional profile (8):

Ultra-heat temperature milk is regular milk that has gone through a pasteurization process at an ultra-high temperature.

According to the International Dairy Foods Association (IDFA), this temperature must be 138ºC (280ºF) or above for at least 2.0 seconds (9).

Notably, UHT-processed milk still has the same nutritional properties as regular milk. However, it has a much longer shelf-life of approximately 30 to 90 days when refrigerated (10).

When tested by a trained sensory panel, the panel noted that UHT milk had “distinct cooked and sulfur flavors” compared with regular milk (11).

The nutritional profile of UHT milk will depend on the type (whole/reduced fat/fat-free) of milk.

The name of the primary sugar in milk is lactose.

However, much of the world’s population is lactose-intolerant. This means that regular milk can cause digestive symptoms in many people (12).

For this reason, lactose-free varieties of milk are available.

Notably, “lactose-free milk” still contains lactose, but producers add an enzyme called lactase to it. Lactase is the enzyme that helps break lactose down, which people with lactose intolerance do not produce in sufficient quantities (13).

Once again, the specific nutritional values of lactose-free milk can differ depending on the type of milk (whole/skim).

That said, here are the nutritional values of lactose-free whole milk per 244-gram cup (14):

Buttermilk is a drink made from the bacterial fermentation of milk using a lactic acid-producing culture (15).

Compared to milk, buttermilk has a thicker consistency and a slightly sour taste.

However, buttermilk is very close to regular milk in nutritional value.

Here are the nutritional properties for buttermilk made from whole milk, per 245-gram cup (16):

See this guide for more information on buttermilk.

Evaporated milk is a sweet milk-based drink, often used with cakes and other desserts.

Despite being sweet, evaporated milk contains no added sugar or additional ingredients.

Instead, the production process involves heating milk and letting some of the water content evaporate from it.

The result is that evaporated milk has a thicker consistency and double the sugar content of regular milk. Thus, it has a sweeter taste (17).

Since the water content of evaporated milk is much lower, it also has higher protein, fat, and calorie levels.

A 252-gram of evaporated milk provides the following nutritional values (18).

See this full guide to evaporated milk for more information

While most commercial milk comes from cattle, goat milk is a relatively common alternative.

Some people feel there is a difference in taste, with “grassy” being one common descriptor, but others find it hard to notice any difference.

The nutritional differences are minimal, too; the values per 244-gram cup of whole goat milk are below (19):

Milk powder (sometimes known as powdered milk) is produced from an evaporation process that removes all the liquid from milk.

Since it has no water content, the remaining milk powder has a much higher nutrient density.

Milk powder has multiple uses, and it is used in baby formulas, food production (e.g. milk chocolate), and baking.

Per 100 grams, whole milk powder has the following nutritional profile (20):

Compared to whole milk powder, milk powder made from skim milk has less fat and calories.

Here are the nutritional values per 100 grams of skim milk powder (21):

The process of making condensed milk is the same as evaporated milk.

When heating milk, some of the water evaporates, and the remaining milk becomes more concentrated.

A typical 304-gram cup of condensed milk has the following nutritional values (22):

Plant milk can come from various foods, including grains, nuts, and seeds.

There are dozens of plant milk varieties, but this guide will focus on the most common options.

Almond milk is the product of almonds and water, and it is available in sweetened and unsweetened forms.

Some almond milk products are also fortified with nutrients such as calcium, iodine, vitamin B12, and vitamin D.

However, this fortification (and the amount) will vary from brand to brand.

Almond milk is the most popular nut-based milk, and it has a light and nutty taste. It is also probably the lowest calorie variety of milk.

According to the USDA FoodData Central nutrition database, a 262-gram cup of unsweetened almond milk provides (23):

As we can see, unsweetened almond milk is low in calories, carbohydrates, and fat compared to dairy milk.

However, it is not a good alternative for its protein content.

See this full guide to almond milk for more information

Cashew milk is another popular plant milk produced from nuts.

However, the nutrition profile is quite different from almond milk.

Here are the nutritional values for a 240-ml cup of unsweetened cashew milk (24):

As shown, cashew milk has similar calories as whole dairy milk. However, it contains more fat and fewer carbohydrates and protein.

Coconut milk is slightly different from the other kinds of plant milk available.

For one thing, it has been available a lot longer, and it has been a traditional food ingredient for centuries in South-East Asia.

Additionally, regular coconut milk tends to be used in soups and curries rather than as a milk alternative.

That said, the light variety of coconut milk can also work in drinks like coffee.

Per 244-gram cup, coconut milk has these nutritional values (25):

See this article for a complete nutritional guide to coconut milk

Hazelnut milk has a significantly lower carbohydrate content than other nut-based milk products.

Regarding its taste profile, hazelnut milk is very mild and has a slightly nutty flavor.

Per 240-ml cup, the nutritional values for unsweetened hazelnut milk are as follows (26):

Despite being a seed, milk made from hemp tends to have a nutty taste similar to other kinds of nut milk.

The flavor is mild, and it has a thicker/creamier consistency than many plant milk options.

While the protein content of hemp milk doesn’t quite match dairy milk, it is higher than other nut milk varieties.

A 257-gram cup serving of hemp milk has the following nutrition profile (27):

Oat milk is the most popular type of milk produced from grains.

Also, it is the second most popular plant-based milk in the United States after almond milk (28).

Oat milk has a medium-thick consistency, but it is not as thick or creamy as whole dairy milk.

It has a light, oaty, and somewhat nutty taste, and it is lower in fat and higher in carbohydrate than many kinds of plant milk.

Unlike many types of plant-based milk, pea milk is a rich source of protein.

An unsweetened 240-ml cup of pea milk has the following nutrition profile (30):

Rice milk is relatively bland and mild and has no strong flavors.

However, it has a mild sweetness due to its high carbohydrate content.

Here is the nutritional profile for one 240-ml cup of unsweetened rice milk (31):

Soy milk is one of the oldest plant-based milk varieties and one of the most popular.

In the United States, it is the third most popular plant-based milk behind almond milk and oat milk (32).

Soy milk has a mildly sweet flavor, and many people seem to enjoy the taste.

Here are the nutritional values for a 240-gram cup of unsweetened soy milk (33):

Nutritional Comparison Table For Each Type of Milk

The following table presents the nutritional values per cup of each (liquid) milk in this guide for easy at-a-glance comparison.

Here are some crucial points to consider if opting for plant-based milk.

This article shows just how many different milk options are available for consumers.

However, they are not all like-for-like options.

For this reason, it is vital to be aware of the nutritional differences if particular nutrients are of importance.

If choosing plant-based milk, finding a product fortified with essential nutrients such as calcium, iodine, vitamin B12, and vitamin D is a good idea.

In contrast, if taste is the primary consideration, it is just a matter of choosing the preferred type of milk.