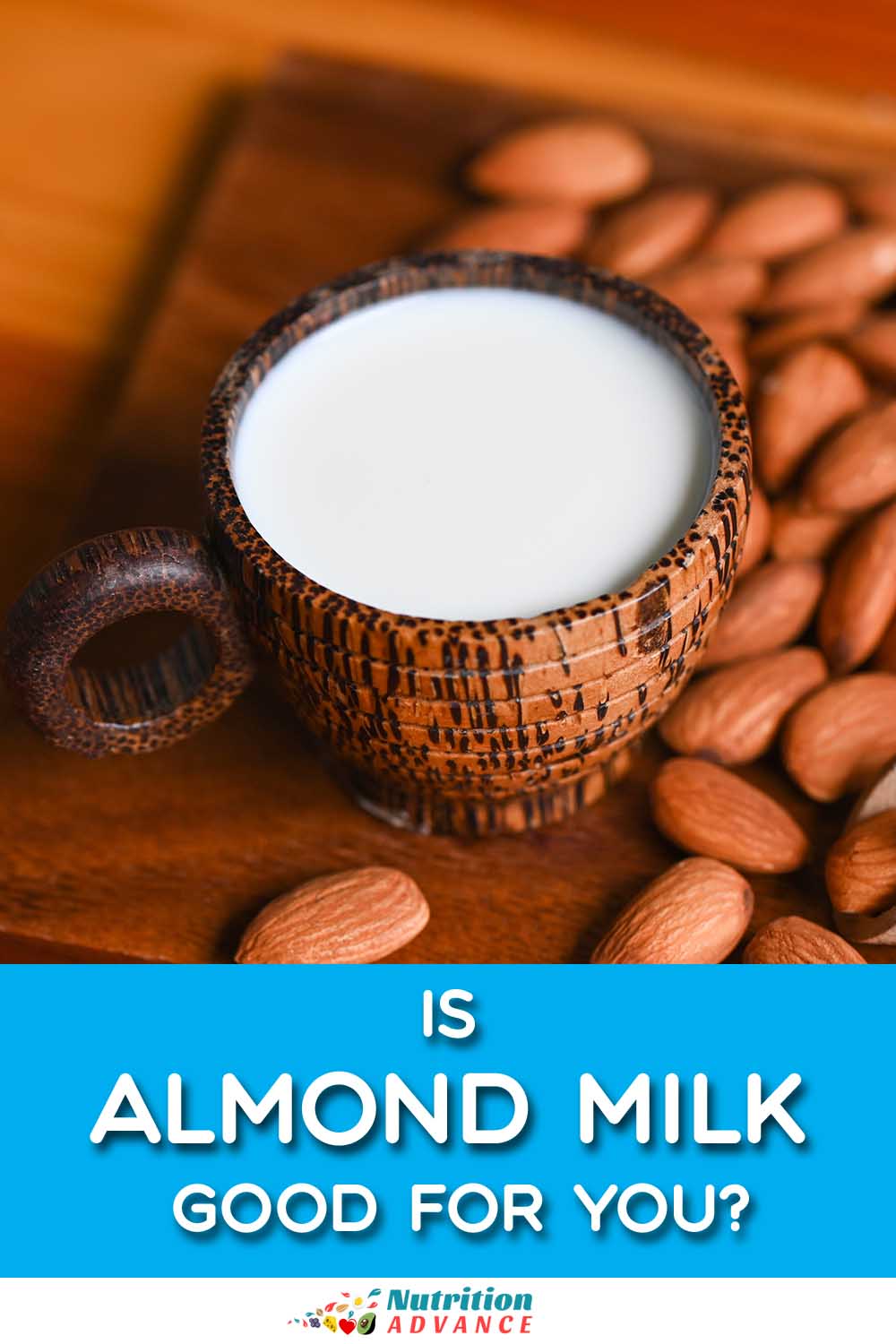 Almond milk is one of the most popular plant-based milk options.

However, what does it offer nutritionally?

Does almond milk provide ample nutrients, and is it a good alternative to cow milk?

This article examines the nutritional properties of almond milk, how it compares to regular dairy, and findings from scientific studies.

Is almond milk good for you? Let’s take a closer look.

What Is Almond Milk?

Almond milk is a popular drink made from filtered ground almonds and water.

However, almond milk may also have some additional ingredients:

Almond milk has a mildly sweet and nutty taste, with sweetened varieties having a less subtle and much sweeter flavor.

Like many plant-based kinds of milk, almond milk is growing in popularity.

According to the Almond Board of California, almond milk held a 77% share of retail sales for milk substitutes in the United States in 2021 (2).

How Is Almond Milk Made?

The Food Science and Human Nutrition department at the University of Florida published an informative guide to this process.

Here is a simple summary:

Key Point: Almond milk is a common milk alternative that is growing in popularity.

As previously mentioned, there are numerous varieties of almond milk. For this reason, the nutritional values will vary depending on the exact type (sweetened/unsweetened, flavored/unflavored).

That said, here are the typical nutritional properties of unsweetened, fortified almond milk per cup (262g). The source of the nutritional data is the USDA’s FoodData Central database (3).

Daily values (% DV) have been calculated using the FDA’s recommended daily values based on a 2000-calorie diet (4).

Key Point: Almond milk is low in calories and only contains small amounts of carbohydrates, fat, and protein. It is an excellent source of vitamin E.

Is almond milk a good dairy alternative? That depends.

To answer this question, we should first examine how it compares to cow’s milk and what the drinker wants from their milk.

Firstly, the table below shows the respective calorie, carbohydrate, fat, and protein content in one cup of almond milk, whole cow’s milk, and skim cow milk (3, 5, 6):

As we can see from the table, almond milk has significantly lower levels of calories, carbohydrates, fat, and protein.

Unlike dairy milk, almond milk contains no dietary cholesterol. It also has approximately double the sodium content of cow’s milk.

Thus, checking the label before purchase is necessary if looking for almond milk with higher levels of essential nutrients.

Studies Comparing Almond Milk To Dairy and Other Milk Products

We can also look at the results of a recently published study that compared the nutritional content of almond milk, other plant milk, and dairy milk.

Published in June 2022, the study looked at the nutrient composition of almond milk based on 12 different almond milk samples (7).

An earlier 2021 study noted that almond milk has less than half of the protein compared to dairy and soy milk. Although almond milk contained more calcium than other kinds of milk in the analysis, it had significantly lower levels of folate and vitamin B12 (8).

There was also an interesting observational finding from a study published on milk beverage consumption and childhood height in 2017 (9).

The researchers noted that further study is necessary to understand these relationships better.

Whether almond milk is a good dairy alternative (or not) depends on the context and what each individual deems important:

Key Point: Almond milk isn’t a like-for-like nutritional replacement for dairy milk. However, it might be a suitable alternative depending on the context of what the individual wants from their milk.

Here is a summary of some of the main beneficial aspects of almond milk.

A Good Source of Vitamin E and Calcium

Almond milk offers 16.6 mg of vitamin E per 262-gram cup, a substantial level of this essential nutrient, equal to 110% of the daily value per cup (3).

Among its numerous vital functions, vitamin E plays a crucial role in the immune system and protecting cells from damage (10).

Since dietary sources of vitamin E can be relatively hard to find, this is one of the key benefits of almond milk.

As previously mentioned, research has shown that almond milk also has higher calcium content than other plant milk (8).

Lactose is a simple sugar found in dairy milk.

A 2017 systematic review and meta-analysis evaluated the prevalence of lactose malabsorption based on data covering lactose tolerance tests, genotyping, and breath tests (11).

Unlike regular cow’s milk, almond milk contains no lactose. As a result, it offers a lactose-free milk option for individuals with lactose intolerance.

Since LDL-C is significantly associated with an increased risk of cardiovascular disease, people with high levels may wish to lower their saturated fat intake (13, 14).

For this purpose, almond milk (or skim milk) is a simple way to lower saturated fat intake when replacing whole milk.

In this context, almond milk is a better choice than coconut milk, which also tends to be high in saturated fat.

Most foods have potential pros and cons, and almond milk is no different.

Here are some of the potential downsides of almond milk.

For instance, a cup serving of almond milk provides only one gram of protein, eight times less than dairy milk (3).

For people who drink milk as a protein source, almond milk is an inferior nutritional choice to milk options such as dairy and soy milk.

Unfortified Almond Milk Is Low In Vitamins and Minerals

The fortification of almond milk with vitamins and minerals may vary from brand to brand.

Some versions may contain high calcium, vitamin D, and vitamin B12.

In contrast, other almond milk brands may be unfortified and thus very low in these nutrients.

If almond milk is a regular staple in the diet, it should be a fortified variety to better contribute to nutrient requirements.

A quick label check should show what vitamins and minerals the product has been fortified with.

This finding makes sense because almonds are recognized as one of the most oxalate-rich foods (16).

We can find oxalates in many different foods, and most people can usually consume them without issue. However, in rare cases, high intakes of oxalate can potentially be an issue for individuals prone to developing kidney stones (16, 17, 18).

Individuals currently on a low-oxalate diet or prone to kidney stones may wish to discuss almond milk with their medical team.

Almonds are tree nuts, and tree nuts are one of the most common allergenic foods (20, 21).

A 2020 study published in the Annals of Allergy, Asthma, and Immunology journal found that the prevalence rate of tree nut allergy ranged from around 1% to 3% worldwide (22).

Almond milk is unsuitable for anyone with a tree nut allergy.

Key Point: Almond milk has some potential downsides: depending on fortification, it can be low in essential nutrients. It has a small protein content and contains tree nuts and high oxalate levels, which may be an issue for a small subset of people.

How To Make Almond Milk At Home

It may seem easier to buy ready-made almond milk in a store.

However, making homemade almond milk in the kitchen is quick and simple.

All the process requires is blending almonds with water until the liquid has a smooth consistency. At this stage, strain out lumpy bits using a fine mesh strainer (disclosure: affiliate link) for the smoothest consistency.

One cup of almonds to four cups of water is about right, but changing the number of almonds has some effects:

Key Point: Making almond milk at home is possible, and it is quick and easy.

Almond milk doesn’t match up to dairy or soy milk for protein content and may provide lower vitamin and mineral levels.

However, it is an excellent source of vitamin E and can offer high levels of several essential nutrients when fortified.

Overall, almond milk can be a good milk option for those who enjoy the taste and don’t mind the lack of protein equivalence.

2 thoughts on “Is Almond Milk Good For You?”