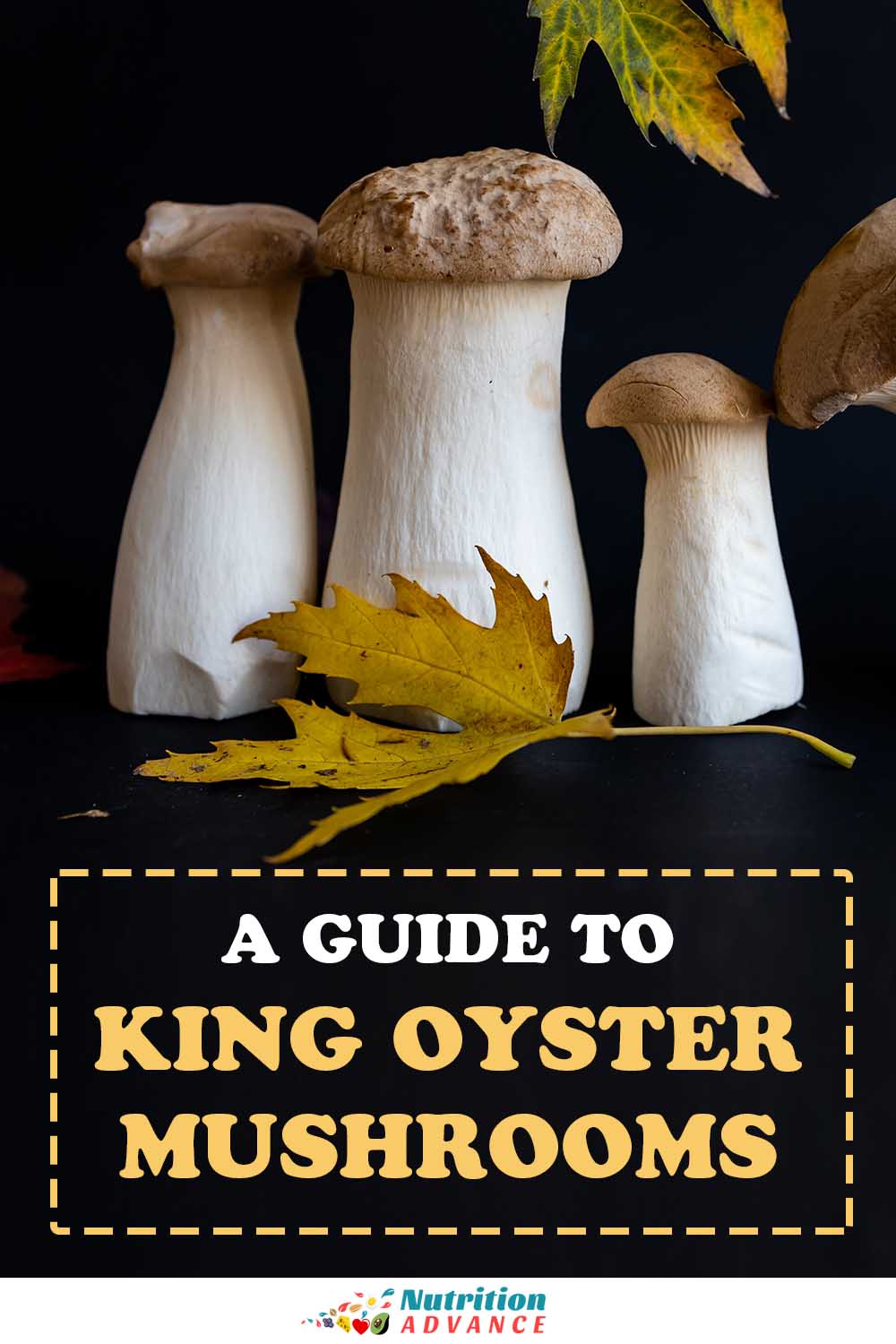 King oyster mushrooms are one of the world’s most popular culinary mushroom varieties.

However, what do they offer regarding nutritional benefits?

This article examines the nutritional properties and potential benefits of king oyster mushrooms.

What Are King Oyster Mushrooms?

King oyster mushrooms, also known by their scientific name ‘Pleurotus eryngii,’ are native to the Mediterranean, North Africa, and parts of the Middle East and Asia (1, 2).

As shown in the above image, king oyster mushrooms have a long and thick white stem and a brown cap that is commonly around two inches (5 cm) wide. They are among the largest edible mushrooms.

The mushrooms are particularly popular in East Asian cuisine and feature in various dishes from this region of the world.

In recent times, king oyster mushrooms have had worldwide distribution and production, and they are widely available in large grocery stores.

In addition to their ‘king oyster’ name, the mushrooms have several other nicknames, including ‘king trumpet.’

King oyster mushrooms have an interesting taste and texture.

Despite being relatively mild by themselves, they have a refreshing earthy flavor. The mushrooms also absorb flavors from dishes in which they are incorporated.

Since the mushrooms are thick and have a high water content, they are also quite juicy.

Key Point: King oyster mushrooms are a large and thick mushroom variety with a chewy texture and enjoyable taste.

The source of nutritional data is the USDA’s FoodData Central database. Daily values have been calculated using the FDA’s recommended daily values, based on a 2000-calorie diet (3, 4).

As shown in the table, king oyster mushrooms are low in calories. They provide a small to moderate level of carbohydrates and a low level of fat and protein.

Unfortunately, the USDA data does not provide the full nutritional breakdown for carbohydrates (fiber and sugar) and fat (saturated, monounsaturated, and polyunsaturated).

These B vitamins play a role in the metabolism of food and contribute to the immune system (5, 6, 7).

King oyster mushrooms have a high water content; they are 88% water by weight.

Key Point: King oyster mushrooms are primarily a source of water and carbohydrates and only contain small amounts of protein and fat. Among the vitamins and minerals they contain, the mushrooms offer a significant amount of riboflavin, niacin, and biotin.

There has been a lot of research on king oyster mushrooms, shiitake mushrooms, and mushrooms in general.

However, much of this research has focused on high-strength extracts used in in-vitro studies (sometimes referred to as “test tube” studies). As a result, it isn’t easy to ascertain how relevant findings from this type of study are to human health.

This section examines some potential benefits of king oyster mushrooms based on the compounds they contain, animal research, and study findings from trials using human participants.

After each meal, blood tests were taken every thirty minutes until three hours after the meal.

Notably, the participants had a lower blood sugar response after the meal containing king oyster mushrooms. Additionally, levels of a ‘hunger hormone’ called ghrelin were lower after the king oyster meal alongside higher ratings of self-perceived fullness and a lower desire to eat.

Key Point: Based on a small randomized controlled trial, king oyster mushrooms may potentially have a blunting effect on blood glucose levels after a meal. The mushrooms may also lower hunger levels and decrease ghrelin levels.

In one study, researchers fed rats with high cholesterol a powdered king oyster mushroom supplement for six weeks. Notably, the king oyster-supplemented group had a 62.5% reduction in LDL-C compared to rats not given the supplement (9).

Additionally, a 2020 study examined the effect of a polysaccharide extract from king oyster mushrooms on mice fed a high-fat diet. Polysaccharides are a type of carbohydrate found within the mushroom. Interestingly, compared to mice who did not receive the supplement, the mice fed king oyster polysaccharides had less body weight gain, and total cholesterol and LDL-C levels decreased (10).

The researchers noted the reason for this was likely that the bioactive polysaccharides extracted from king oysters improved the gut bacteria balance of the mice and increased the excretion of fats into feces (10).

It is important not to read too much into these animal studies. The results were in mice rather than humans and using high-strength extracts rather than whole mushrooms.

Key Point: Low-level evidence from animal studies suggests that king oyster mushrooms and the compounds they contain are capable of lowering LDL-C. This effect has not been confirmed in humans.

There are relatively few dietary sources that provide high levels of ergothioneine, and the compound is being investigated for its potential benefits for human health (12, 13, 14).

Recent research has established that blood levels of ergothioneine tend to fall with age. Also, some studies have noted that low levels appear to be associated with several chronic diseases and cognitive decline (15, 16, 17).

Ergothioneine also sells as a supplement; supplementary doses tend to be less than 30 mg (18).

However, research on ergothioneine is in its infancy, and there are a lot of unknowns at this stage.

Key Point: King oyster mushrooms are a rich source of ergothioneine, a type of amino acid that may have benefits for human health.

How To Use King Oyster Mushrooms

There are many different ways in which we can use king oyster mushrooms.

The mushrooms work well in stir-fries, curries, and soups, absorbing flavors from the respective dish.

Due to their large size, grilling these mushrooms is possible too.

Marinating them before grilling adds to the taste, and a marinade including ingredients such as those below can work well:

Here are some pictures of what king oyster mushrooms look like after cooking:

Key Point: It is easy to cook king oyster mushrooms. They are versatile and taste great cooked in many different ways.

If not, most Asian market stores should have them for sale, particularly those that focus on selling Chinese, Japanese, and Korean foods.

Additionally, due to the compounds they contain, such as ergothioneine and bioactive polysaccharides, they may have further benefits for human health.

However, at this stage, there is a lack of randomized controlled trials involving human participants to confirm this.