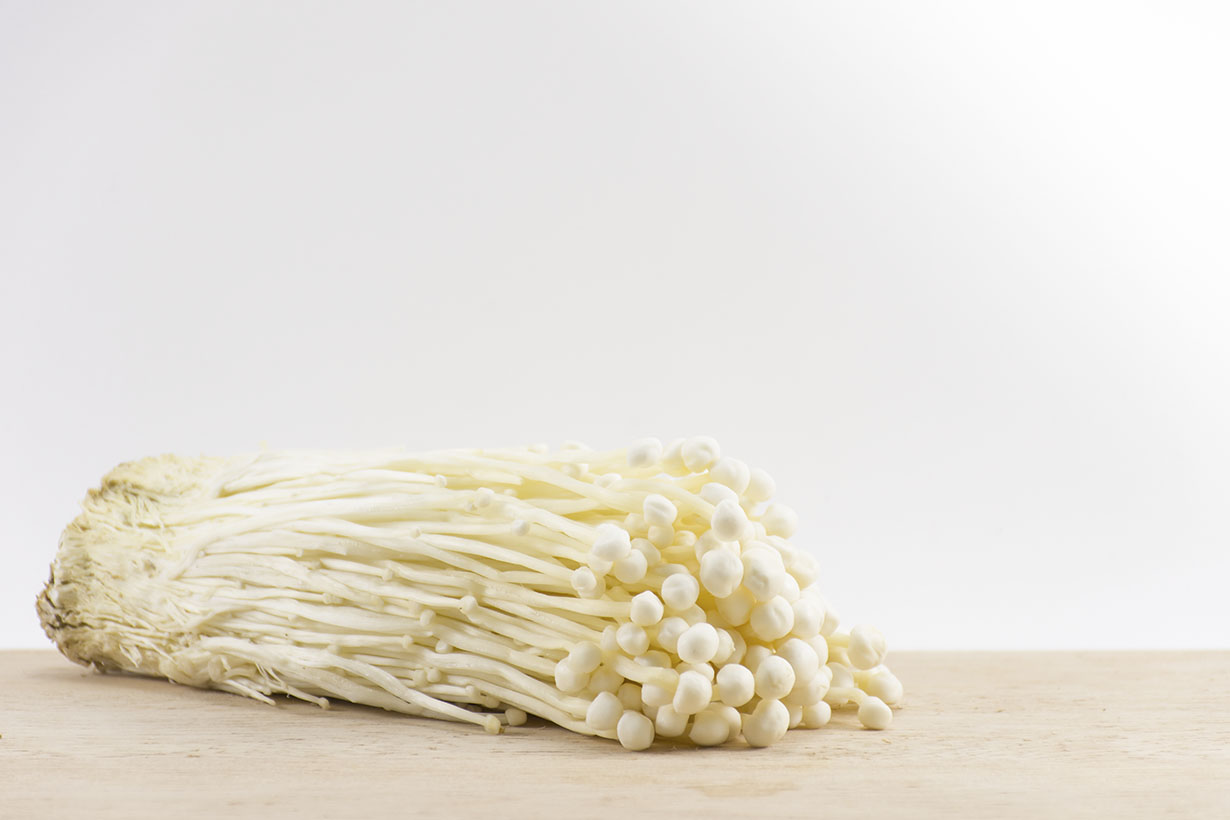 Enoki mushrooms are a type of mushroom that grows together in groups of long stems, and they have long been valued for their health benefits.

The mushrooms are also delicious, and we can eat them in a wide variety of ways.

Enoki have a thin string-like shape, and their texture is similar to noodles and spaghetti.

But where can we find these mushrooms? How do we cook them? And what are the health benefits?

What Are Enoki Mushrooms?

Popularly known as ‘enoki’ for short, the official name for these mushrooms in their homeland is enokitake.

Other common names include ‘golden needle mushroom’ and ‘lily mushrooms’

They are a mainstay of East Asian cuisine and a regular part of the diet in China, Japan, Korea and Vietnam.

As you can see in the above image, they are long, thin and resemble the shape of noodles.

Traditionally, people tend to use enoki mushrooms in soup. However, they work well in a wide range of dishes whether cooked or raw.

Regarding their taste, they are much milder than other mushrooms but they absorb a lot of flavor from foods they’re cooked alongside.

For those that want a fuller mushroom flavor, cremini mushrooms or maitake mushrooms may be better options.

Key Point: Enokitake mushrooms (enoki for short) are a long, thin fungus that is part of the traditional East-Asian diet.

Here are the nutritional values of enoki mushrooms per 100g (1);

As shown above, enoki mushrooms are low in calories and provide only small amounts of carbs, fat, and protein.

They also contain some beneficial nutrients such as B vitamins and the essential minerals potassium and phosphorus.

Many types of mushrooms have a long history of medicinal use, and this is particularly the case for mushrooms popular in East Asia such as enoki and shiitake mushrooms.

Primarily, this is due to the biologically active chemical compounds the mushrooms contain such as ergothioneine and proflamin.

Wild mushrooms are the most prevalent source of the amino acid, Ergothioneine (2);

Proflamin is another constituent of enoki mushrooms, and studies show it to be a potent anti-tumor agent.

In particular, animal studies show that mice with cancer live an 85% longer lifespan with a proflamin-supplemented diet (3). 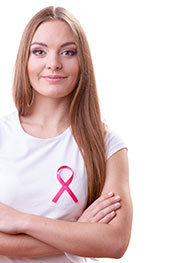 In addition to the above animal studies, there is an epidemiological study showing a 39% reduced cancer rate in areas of Japan where enoki mushrooms are farmed (4).

Of course, this correlation does not equal causation (i.e. we can’t be sure it was the effect of the mushrooms). However, it is certainly an interesting finding.

Several studies have found compounds in enoki mushrooms may potentially inhibit the oxidation of LDL cholesterol (7).

As a result, there is a protective effect against atherosclerosis (hardening of the arteries).

However, it is important to note that this particular study used strong extracts of the compounds, so it is not the same as eating the mushrooms in the real world.

Enoki mushrooms have long been valued in Eastern medicine for their immune-boosting properties.

One reason why is their anti-inflammatory, anti-viral, anti-microbial, anti-diabetic and immune-modulating properties (8).

In plain English, this means they protect the body in lots of different ways – from viruses, bacteria, and general illness.

Notably, they support and enhance the entire immune system, which strengthens our immunity against disease (9, 10, 11).

Key Point: Enoki mushrooms have a lot of scientifically verified benefits. However, some of the more impressive results are from studies using powerful extracts.

How to Cook Enoki Mushrooms 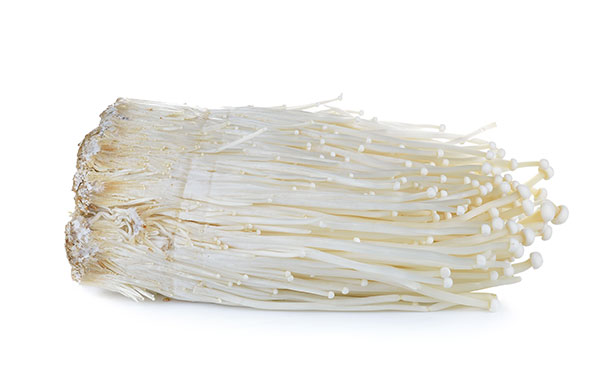 If you are wondering how to prepare enoki mushrooms, it is quite straightforward.

First of all, there are many different ways to use enoki mushrooms; baking, boiling, and frying are all possible.

The first step is to cut away the bottom quarter. As you can see in the picture, this part is clumped together rather than in individual stems.

Next, separate the mushrooms from each other and get them ready for cooking.

One of the best things about enokitake is that, similar to rice and cauliflower, they absorb the flavors of the dish.

When boiling enoki mushrooms, they only need three or four minutes to become tender and soft.

The mushrooms make an excellent combination with a range of foods, and you can directly add them to curries, stews, and soups.

Generally speaking, Asian countries use them in soup and they are like a low carb noodle in these dishes.

Want to cook some meat or fish in the oven? Just prepare the mushrooms and lay them next to whatever is on the baking tray.

The enokis will go very soft and juicy and take on the flavor of whatever is close.

Frying enoki mushrooms is simple and only takes a few minutes.

As the mushrooms absorb flavors exceptionally well, frying in some leftover bacon fat or lard gives a delicious taste.

Otherwise, choose an oil suitable for high heat cooking and give them a quick saute for two or three minutes.

If you add a bit of salt, pepper, and garlic, it goes a long way in the flavor stakes.

Key Point: There are many different ways to cook enoki mushrooms, but adding them into dishes is probably the best choice.

Where Can We Buy Enoki Mushrooms?

The first thing to remember is not to buy them from a health food store – you will likely have to pay a huge markup!

In particular, look for a Japanese or general Asian market, and you’ll be able to pick them up for a low price.

These tend to be the same mushrooms as in Whole Foods but at about 25% of the price.

You can also buy them as dried mushrooms.

With dried mushrooms, they need to rehydrate in boiling water before using them. 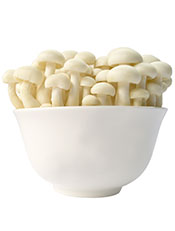 If you have the time, then cultivating enoki mushrooms is a fun option.

They are famously easy to grow compared to other mushrooms.

Enoki mushroom cultivation doesn’t require much equipment except for;

Any plastic container will do, but it will need cleaning well beforehand to make sure no bacteria is present.

You should be able to find the enoki spawn in a local garden center, or you can even buy it online.

According to this guide, take the following steps to grow your own enoki mushrooms;

Key Point: In contrast to other mushrooms, there is minimal need for equipment when growing enoki mushrooms. The only real commitment is time.

Enoki mushrooms are great-tasting, affordable, and versatile mushrooms that offer a range of health benefits.

They add to the taste—and absorb the flavor of—dishes they are in, and we can use them in a wide range of recipes.

For those that haven’t tried them before, they are definitely worth a go.

What Are Cremini Mushrooms and Do They Have Benefits?

Enokitake are also available in forests across the Europe. you can find them during the winter period only! They look different because in the forest they have access to sunlight. Natural i better! On this clip my first december harvest https://www.youtube.com/watch?v=y_CLqLzfb58&t=35s