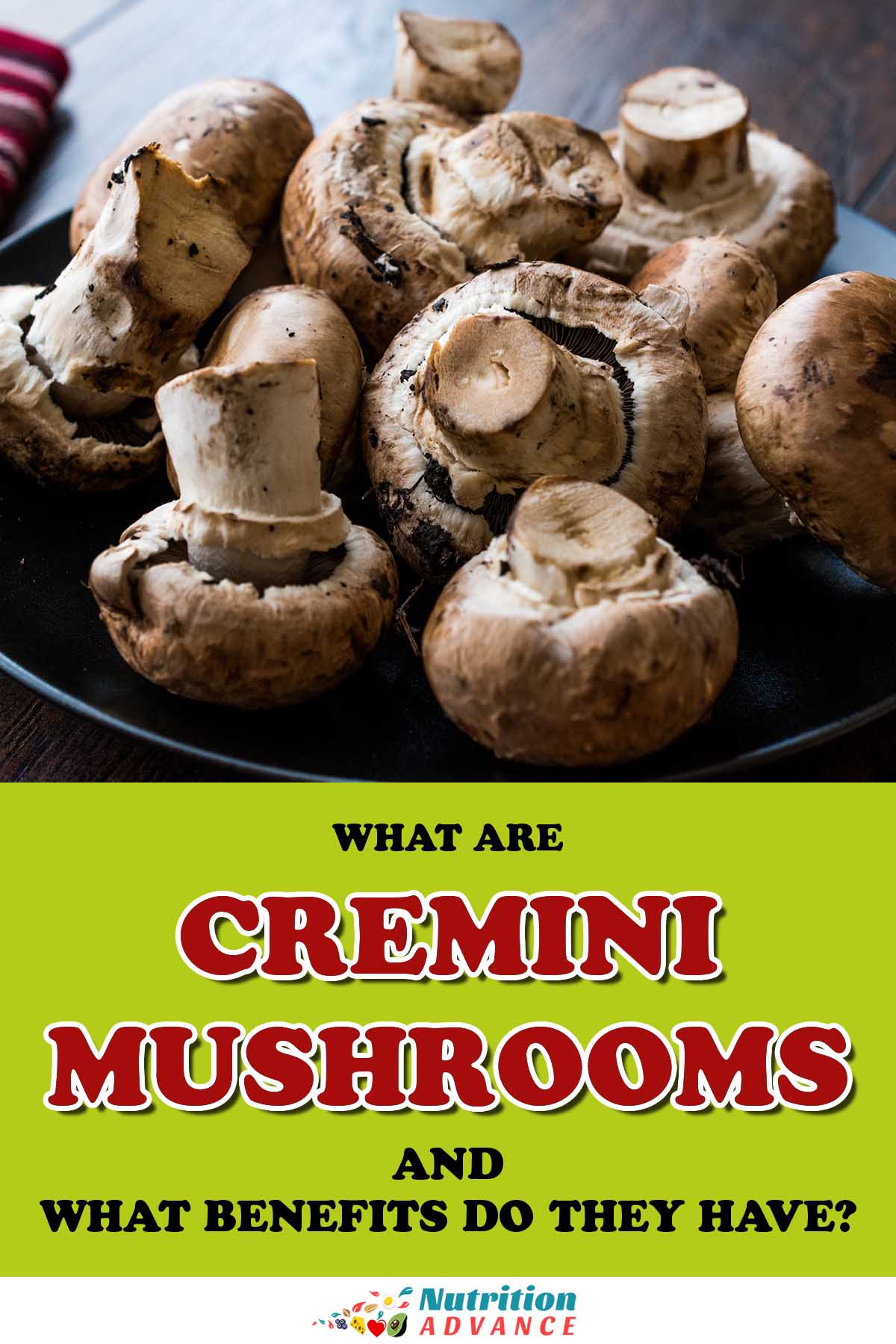 Cremini mushrooms are tasty, nutritious, and they may have some health benefits too.

This article examines what these mushrooms are, their nutrition profile, and what the research says about their potential benefits.

What are cremini mushrooms? 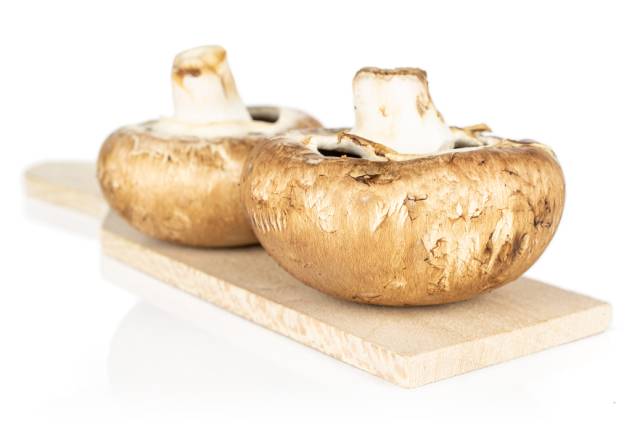 The scientific name for cremini mushrooms is Agaricus bisporus.

During the immature phase of the mushroom’s growth, it can be either white or brown.

The mushrooms grow as they mature further, and the diameter eventually reaches approximately six inches (15 cm). These fully mature mushrooms are sold as portobello (or sometimes “portabella”) mushrooms (2).

According to recent data, the Agaricus bisporus species account for approximately 15% of global mushroom production (3).

The fact that these tasty mushrooms are so easily available is an advantage, as other edible mushrooms such as maitake and morels can be difficult to find.

Key Point: Cremini mushrooms are a small and flavorful mushroom that belong to the Agaricus bisporus species of fungi.

Cremini mushrooms are low in calories, and they provide a wide range of essential nutrients per serving.

Based on the USDA’s FoodCentral Database, the following data shows the nutritional values for cremini mushrooms per 100 grams (4).

Key Point: Cremini mushrooms provide more than half of the daily value for copper. Additionally, they contain significant amounts of selenium and B vitamins.

Cremini mushrooms may have benefits for gut health

A recent randomized controlled trial examined the effect of Agaricus bisporus mushrooms on markers of gut health. The hypothesis was that the mushrooms would have a positive impact on intestinal health due to the prebiotics they contain (5).

In the trial, 32 healthy adults consumed either mushrooms or meat twice a day for ten days. The amounts consumed were matched for protein.

At the end of the trial, the participants consuming the mushrooms had a significantly increased abundance of ‘good’ gut bacteria (Bacteroidetes). They also had decreased ‘bad’ gut bacteria (Firmicutes).

Although research into gut microbiota composition is at an early stage, some studies suggest that a higher ratio of Bacteroidetes to Firmicutes may be associated with improved health outcomes.

For instance, several systematic reviews show that individuals with obesity and type 2 diabetes often have increased proportions of Firmicutes to Bacteroidetes. In contrast, a higher ratio of Bacteroidetes is often seen in lean individuals (6, 7, 8).

Key Point: More research is necessary, but cremini mushrooms may be beneficial for gastrointestinal health.

Several studies have looked at the potential benefits of Agaricus bisporus mushrooms for blood glucose regulation.

However, it should be noted that rodent studies do not necessarily mean the results would be the same in human trials.

That said, there was also a recent human study on Agaricus bisporus mushrooms and their potential effects on diabetic risk factors.

In this study, thirty-seven adults with metabolic syndrome consumed 100 grams of white button mushrooms per day for 16 weeks. Following this, the researchers followed the participants for 30 days and tracked changes to their markers of health (11).

After the 16 weeks of mushroom intake, several blood markers of diabetes risk improved. These positive changes included decreased markers of oxidative stress, increased plasma antioxidant status, and a doubling of ergothioneine, which is an interesting amino acid found in mushrooms.

Future human clinical trials are necessary to better understand the potential benefits of cremini mushrooms (and other varieties of Agaricus bisporus) in this regard.

Key Point: Cremini mushrooms may potentially improve certain risk factors for type 2 diabetes, but there is limited evidence at present.

A source of ergothioneine

As previously mentioned, cremini mushrooms are a good dietary source of ergothioneine (12).

Ergothioneine is an amino acid that contains sulfur, and mushrooms are one of the few things (fungi and bacteria) that can synthesize it (13, 14).

Humans can only derive ergothioneine from their diet, and the amino acid accumulates in the body’s organs and tissues (15).

At present, only limited research exists on ergothioneine, and there is a lack of human clinical trials. However, research from cell and animal studies suggests that ergothioneine may have beneficial functions as an antioxidant (16).

Also, in a study that followed 3236 healthy participants for a median of 21.4 years, ergothioneine was strongly associated with a lower risk of cardiovascular disease and type 2 diabetes (18).

However, this was an observational study, and it is important to note that there are several other factors to consider here. For example, higher levels of ergothioneine were also strongly related to health-conscious eating patterns.

In other words, it could be that an overall healthier lifestyle had a protective effect rather than ergothioneine.

Cremini mushrooms can be a good source of vitamin D

Despite this, all mushrooms—including cremini—have the potential to be an excellent dietary source of vitamin D.

However, this depends on whether the mushrooms receive adequate sun exposure during their growth.

For instance, most commercial mushrooms are cultivated indoors (usually in a dark room). They will contain low levels of vitamin D. In contrast; if the mushrooms receive exposure to sunlight or a UV lamp during their growth, they can provide significant amounts of vitamin D (19, 20).

Research shows that there is a linear relationship between UV-B exposure and the formation of vitamin D2 in mushrooms (21).

On this note, there are two distinct forms of vitamin D:

For supplementary sources, some randomized controlled trials suggest that vitamin D3 is more bioavailable than vitamin D2 and leads to more significant increases in blood levels of vitamin D (22, 23).

However, the evidence is mixed.

For instance, research also demonstrates that vitamin D2 in mushrooms is as effective at raising blood vitamin D levels as vitamin D3.

Key Point: Cremini mushrooms grown with exposure to UV rays can be a good source of vitamin D.

A range of studies has shown that cremini mushrooms contain biologically active polysaccharides, such as mannogalactan and fucogalactans, which may have anti-inflammatory and immune-modulating properties (24, 25, 26).

However, at present, the vast majority of these have been cell studies outside of a living organism.

There is little evidence from human trials to confirm these (potential) benefits.

Key Point: Mushroom polysaccharides have demonstrated anti-inflammatory effects – in cell studies. However, there is little in the way of human studies to make confident claims about such benefits.

These mushrooms are an excellent source of B vitamins, copper, and selenium.

Additionally, they may have further beneficial health effects related to their prebiotic, ergothioneine, polysaccharide, and vitamin D content.

There are numerous different ways to use cremini mushrooms, and they taste delicious, whether served alone or as part of a dish.

See this guide to making sauteed mushrooms for more ideas.