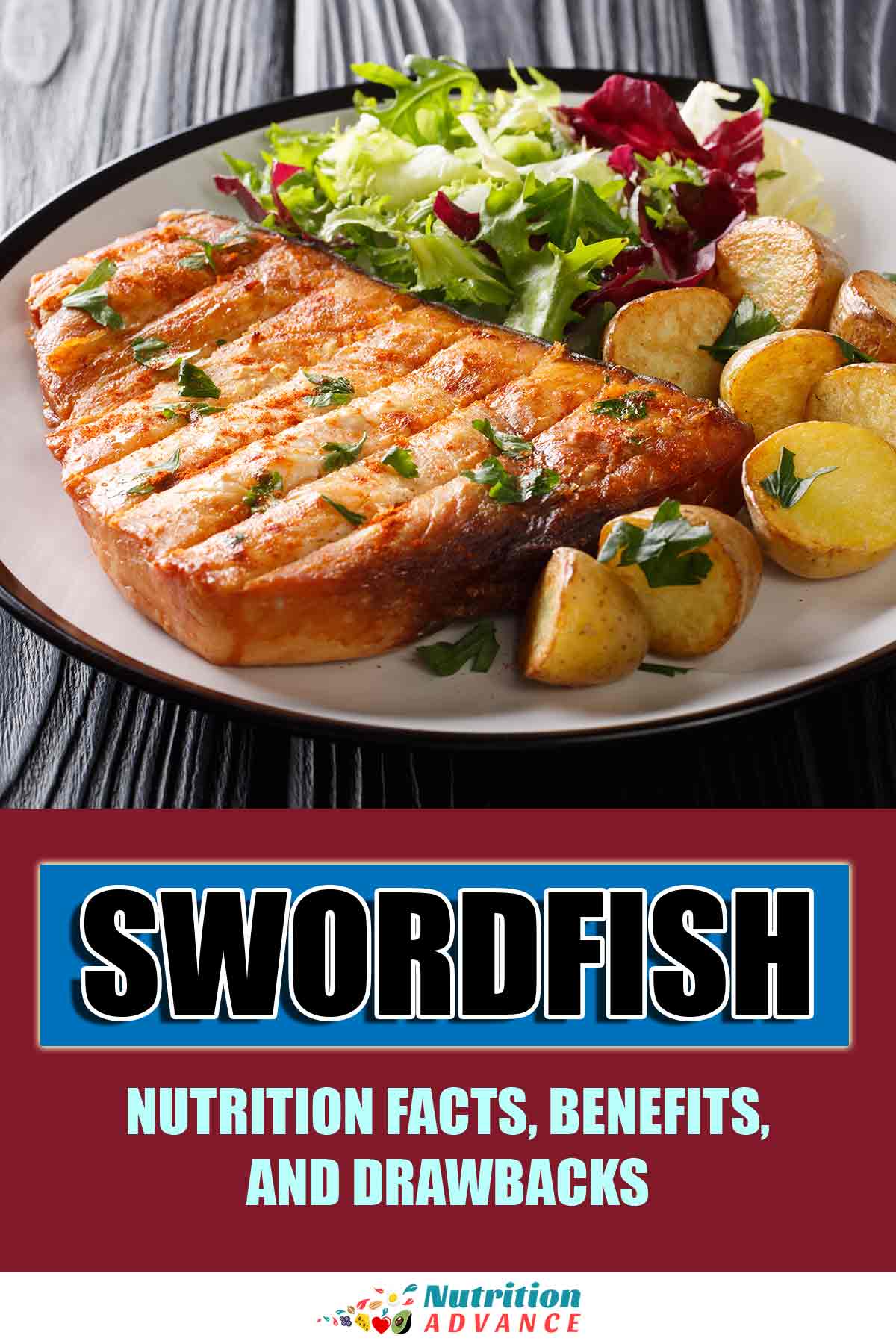 Swordfish is a white-fleshed oily fish sold around the world, and it is particularly prevalent in the Atlantic ocean.

The swordfish is also one of the largest popular seafood options.

Since it can grow up to 650 kg in weight, swordfish is typically served in thick steak-like cuts (1).

In this article, we’ll examine the nutritional values and potential benefits and downsides of swordfish. 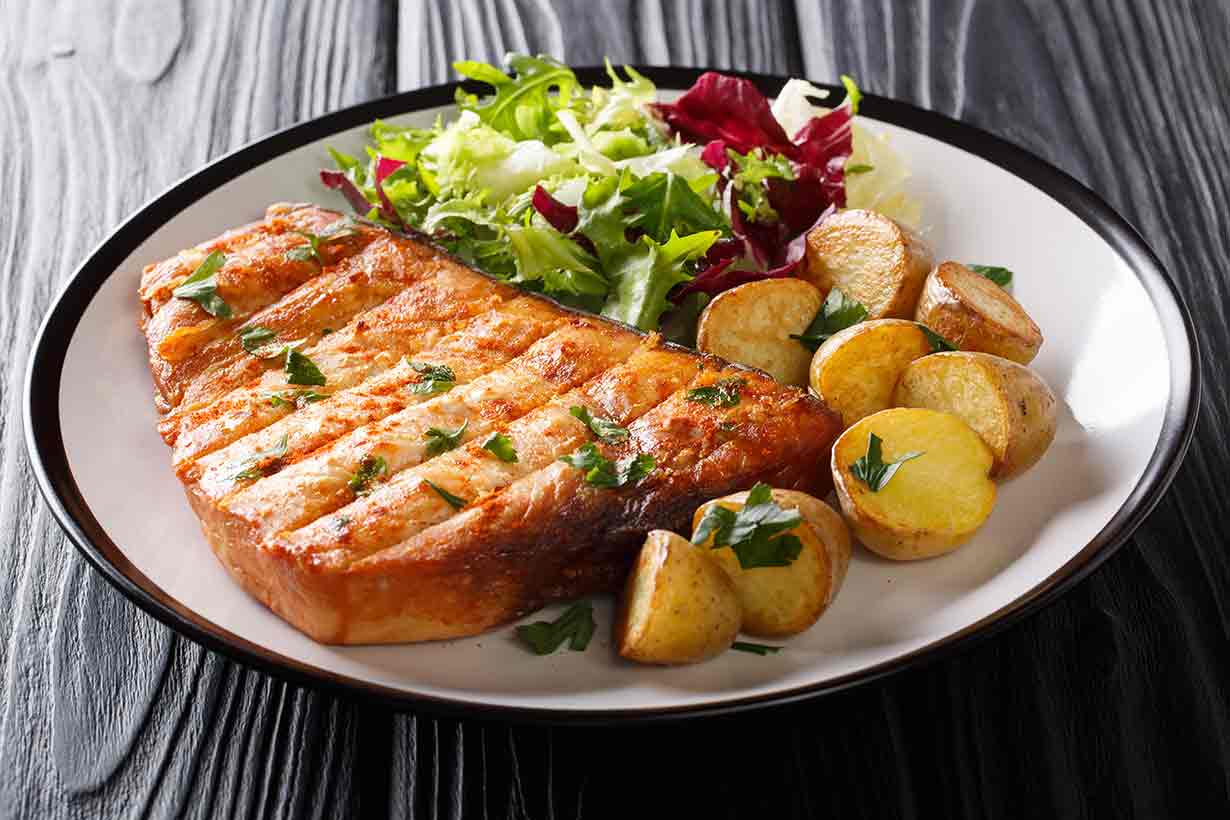 Based on nutritional data from the USDA database, here are the nutritional values of swordfish per piece (136g) serving (1).

Daily values have been calculated using the USDA’s nutritional data and the FDA’s published daily values (1, 2).

Swordfish has several valuable benefits stemming from its nutritional profile.

A Rich Source of Omega-3

Swordfish provides a good amount of these fatty acids, with a typical serving providing approximately 1.3 grams of omega-3 (1).

The two most important omega-3 fats are eicosapentaenoic acid (known as EPA) and docosahexaenoic acid (DHA).

EPA and DHA are the most bioavailable forms of omega-3, and we can find them in seafood such as swordfish (4, 5).

A recent Cochrane review of the evidence on omega-3 analyzed 76 studies that featured more than 162,000 people.

The findings of this review demonstrated that there was high-certainty evidence for EPA and DHA reducing triglyceride levels. There was also evidence that omega-3 may reduce coronary heart disease events and mortality, but the researchers viewed this as low-certainty from the available evidence (6).

Vitamin D is an essential nutrient that functions as a hormone within the human body (7).

While exposure to sunlight is the most reliable way to obtain vitamin D, it is also possible to obtain it from our diet. On this note, oily fish tends to be the best source (8, 9).

On this note, a typical serving of swordfish provides 18.9 mcg of vitamin D, which is equal to 95% of the recommended daily intake (1, 2).

Vitamin D plays an important role in calcium absorption and subsequently, bone health. However, it is also important for the optimal functioning of the immune system (10, 11).

Further to this, systematic reviews suggest that maintaining optimal vitamin D levels may have some extra benefits. These may include helping to protect against acute respiratory tract infection and potentially lowering rates of cancer mortality (12, 13, 14).

Other seafood choices, such as catfish, are also a great source of vitamin D.

Key Point: Swordfish is one of the best dietary sources of vitamin D.

One Serving Provides the Recommended Daily Intake of Selenium

Selenium is another essential nutrient that swordfish provides in high concentrations.

Selenium has several vital functions within the body, but it is particularly important for its role in immune health (15, 16).

Several enzymes within the body are dependent on selenium for activation, and these ‘selenoenzymes’ play a crucial role in the body’s antioxidant system (17).

Some Swordfish Are High In Carotenoids

Carotenoids are orange-colored pigments found within food such as carrots, sweet potatoes, and salmon flesh (18).

These carotenoids also an antioxidant effect within the body. In this regard, research has shown that they may potentially have protective effects for eye health and in protecting human skin from UV-induced damage and general aging (19, 20, 21, 22).

Depending on their diet, swordfish can provide high amounts of carotenoids.

Swordfish with an orange tint to their flesh is known as ‘pumpkin swordfish,’ but it can be difficult to find and typically command a higher price.

Key Point: Some swordfish have a diet rich in carotenoids, and they have an orange flesh.

Although not strictly a nutritional consideration, one positive point about swordfish is the fish’s sustainability ratings.

For instance, NOAA fisheries are responsible for protecting ocean reserves and resources in the United States. This office states that North Atlantic swordfish is one of the most sustainable seafood options (23).

Further to this, another organization involved in protecting seafood reserves—the Monterey Bay Aquarium Foundation—note that swordfish from the North Atlantic, North Pacific, and South Pacific are some of the best choices for sustainable seafood (24).

However, it is worth noting that swordfish from some geographical areas are farmed in an unsustainable manner.

For anyone interested, the full recommendations from Monterey Bay are available here.

Key Point: Swordfish has a high mercury content and its consumption should be moderated.

Despite having several nutritional benefits, there are also some drawbacks to consider about swordfish.

Swordfish are a large predatory fish high on the food chain. Since this fish consumes a wide variety of prey and lives for a long time, it can accumulate significant amounts of mercury (23).

In one study that analyzed the mercury levels and seafood intake of 123 people, swordfish consumption, unfortunately, had the largest association with blood mercury levels (24).

Furthermore, the National Marine Fisheries Service Survey evaluated the mercury content across different seafood species between 1990 and 2012. The results of this study found that the mean mercury concentration of swordfish was 0.995 PPM (25).

Since swordfish contains such high amounts of mercury, the United State’s FDA and the United Kingdom’s NHS both recommend avoiding its consumption during pregnancy (26, 27).

For other adults, these organizations recommend eating no more than one portion of swordfish per week.

On this note, anyone looking for lower mercury fish should look into sprats a nutritious, low-mercury fish.

Key Point: Swordfish has a high mercury content and its consumption should be moderated.

Since swordfish fishing can be difficult, these fish tend to be some of the most expensive commercial fish.

For individuals who are looking at swordfish just for its nutritional values (rather than taste), then there are more affordable options that offer better value.

For example, sardines offer many of the same nutritional benefits as swordfish, and they cost a fraction of the price.

Other cheaper oily fish options include trout, herring, anchovies, and even salmon.

Key Point: There are much cheaper (and arguably more nutritious) options than swordfish.

How To Cook Swordfish

Given the size of swordfish cuts, the typical cooking method is to pan-fry them like a steak.

This method simply involves cooking the swordfish fillets for a few minutes on each side until done.

All in all, swordfish is a nutritious type of seafood with some excellent nutritional benefits.

For those that don’t mind its potential downsides, it’s a tasty oily fish option that provides a wide range of nutrients too.