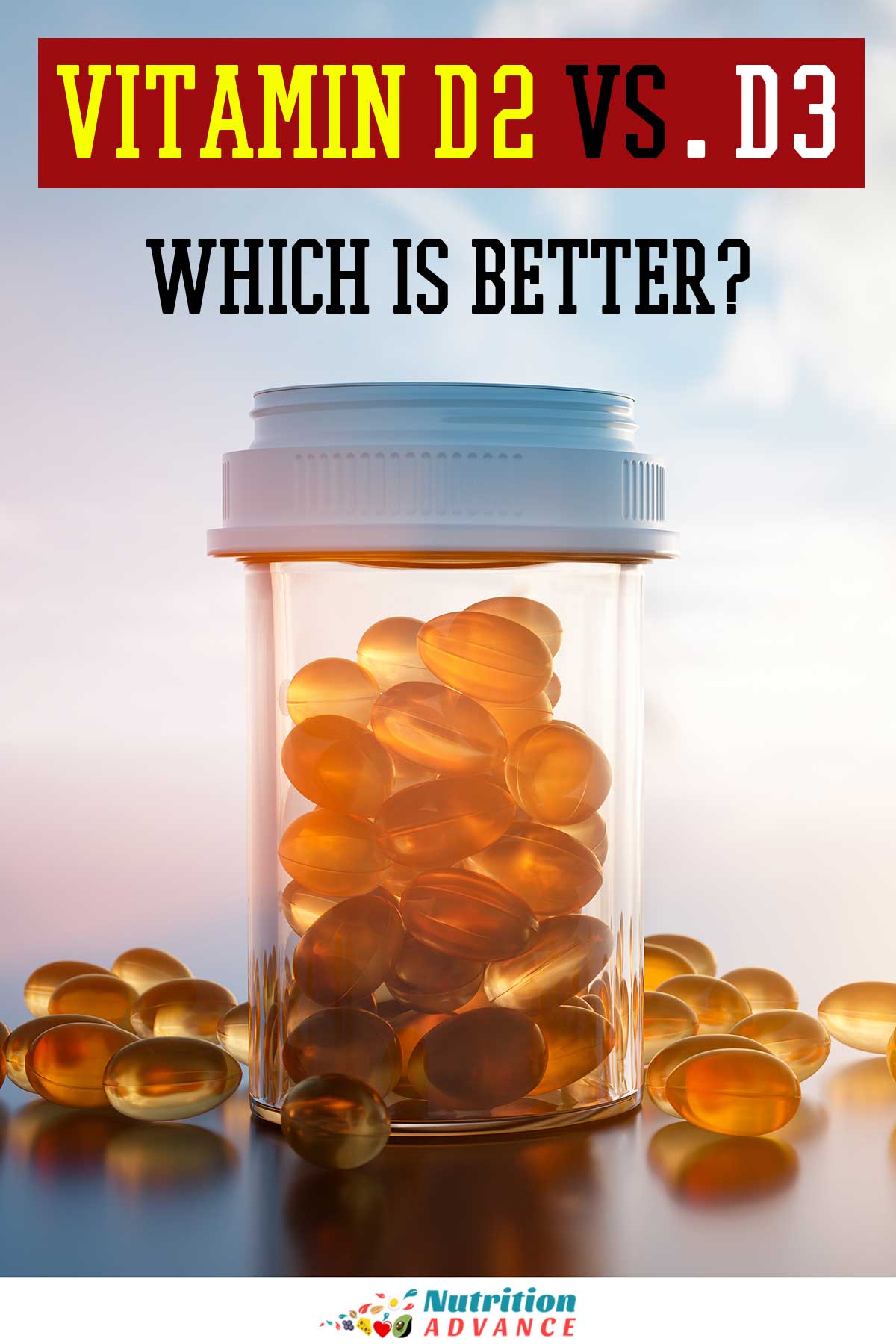 Vitamin D is an essential nutrient that acts as a hormone in the body.

For those who live in colder and darker climates, low vitamin D levels can be surprisingly common (1, 2).

If we do not get sufficient vitamin D from sunlight or food, then health authorities typically recommend supplementation to meet requirements (3, 4).

Despite large amounts of subsequent research, there is often confusion over whether the two are equal or different in terms of their effectiveness. This article examines the breadth of available research to determine how vitamin D2 and vitamin D3 compare for bioavailability and effectiveness.

What Are the Differences Between Vitamin D2 and D3? 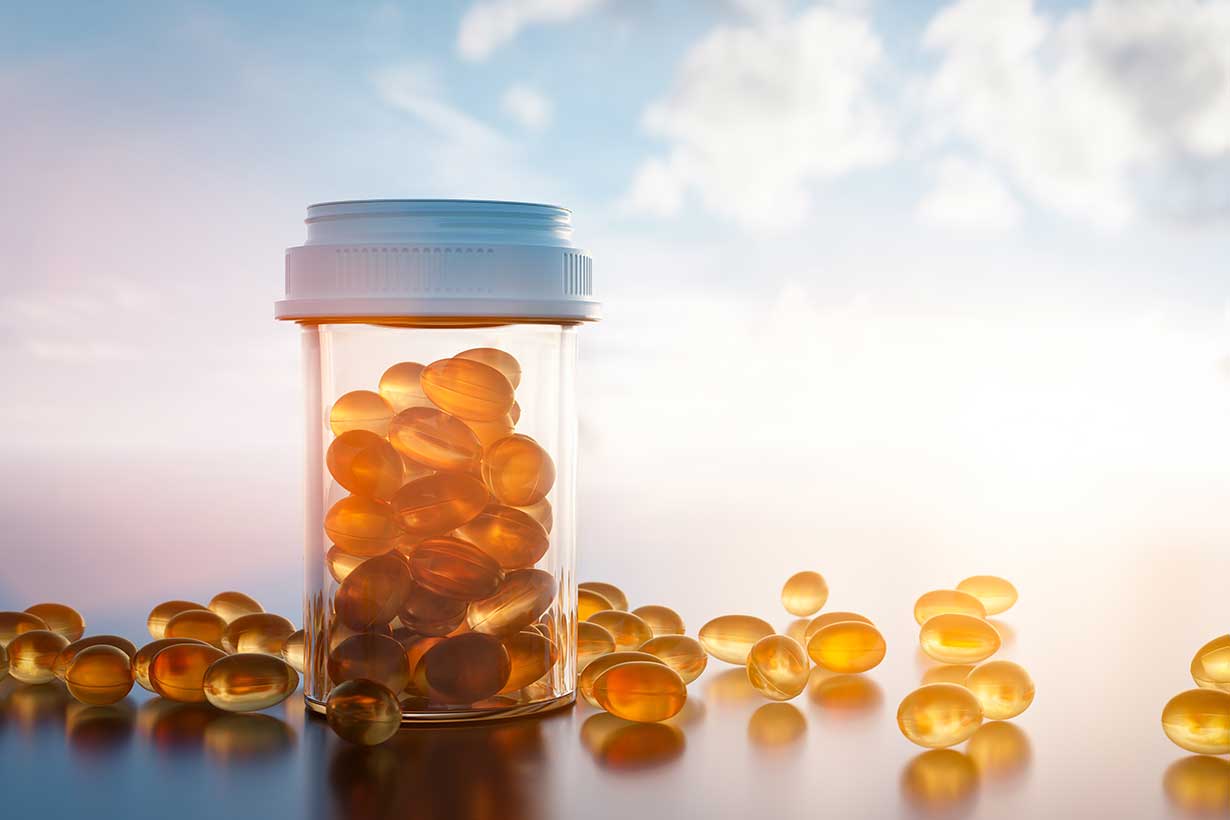 Generally speaking, the main differences between vitamin D2 and D3 are their source and how the body processes them.

Once ergocalciferol and cholecalciferol are produced, they are taken to the liver and then the kidney to undergo enzymatic reactions. In the liver, both D2 and D3 are metabolized into 25-hydroxyvitamin D, also known as 25OHD or calcifediol (9).

Calcifediol is the form of vitamin D found circulating in the blood, but it can also undergo a further reaction in the kidney, which produces calcitriol. Calcitriol is the hormonal (and most active) form of the vitamin (9, 10).

Sources of Vitamin D2 and D3

We can obtain vitamin D2 from mushrooms that have been exposed to UV light, fortified foods such as milk, and vitamin D2 supplements.

Vitamin D3 is available from certain animal foods such as oily fish and egg yolks, and it is also available as a supplement. As previously mentioned, it is also produced by sunlight reacting with a compound in human skin.

For more sources, there is a list of vitamin D rich foods here.

As previously mentioned, there appears to be some degree of confusion on whether D2 and D3 are equally effective or not.

To examine the evidence on this, a search was conducted using Medline to identify:

Following this, the full paper for each study was subsequently analyzed.

For those interested in further information, you can find the studies used for this review and from where they are accessible in the table below.

Otherwise, skip the table and keep on reading.

Systematic reviews and meta-analyses of randomized controlled trials are considered the highest quality studies and the least prone to bias.

Here are the findings from such studies on the efficacy of vitamin D3 vs. vitamin D2.

After meta-analyses and systematic reviews, randomized controlled trials (RCTs) are the next most reliable way of judging research.

These trials compare two interventions (or an intervention and a placebo) in a randomized way, thus removing the risk of bias.

Here is an overview of randomized controlled trials that compared the efficacy of vitamin D2 and D3.

Once again, the full paper’s link is available (in brackets) for anyone wishing to obtain more detailed information.

Note: “87% more potent” sounds impressive. However, it should be noted that this was one of the smaller studies featured in this guide, so the effect sizes may be more significant.

Additionally, several of the other studies in this review noted that vitamin D2 is more effective when taken daily rather than weekly.

Note: one potential issue with this study is that participants were “permitted to take their multivitamins.” This may have introduced bias into the results.

Note: again, this study was very small, which may have led to greater effect sizes. Additionally, high monthly doses of vitamin D2 do not appear to be the ideal regimen, as seen with other studies.

Other non-randomized studies and narrative reviews tend to note the same findings as the higher-quality studies listed above.

While it is relatively common to hear claims that D2 and D3 are equal or that D3 is by far the best source, the existing research suggests the truth lies somewhere in between.

Here is a summary of the common findings that have been replicated across multiple, high-quality studies:

With this in mind, it appears that, for most people, D3 would be the most effective form of vitamin D for raising serum vitamin D levels.

However, D2 is also effective, and it may be the preferred choice for those who prefer to get their vitamin D from a plant source.

For more articles on essential nutrients, see this guide to essential vitamins.