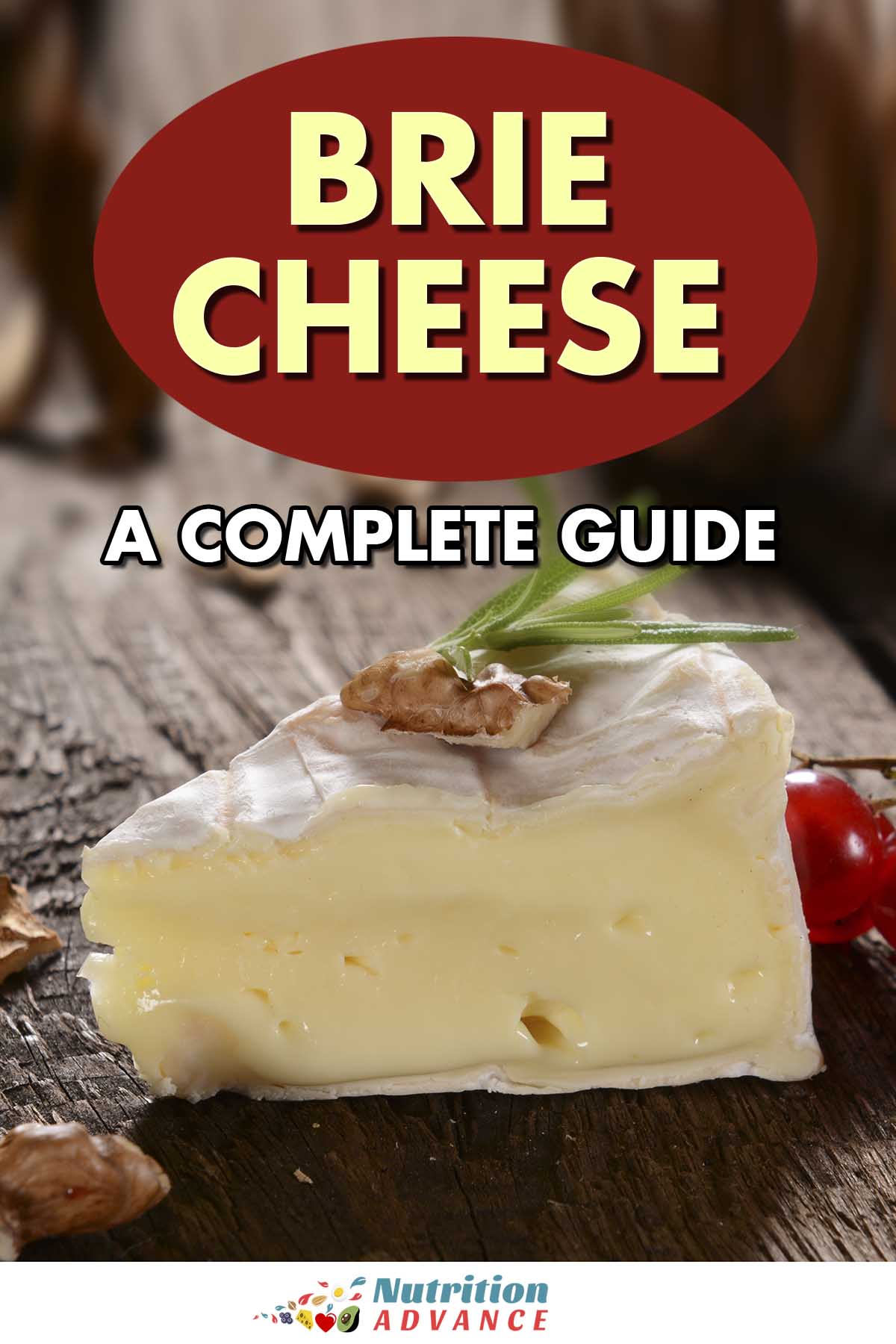 Brie is a delicious French cheese with a soft and creamy taste.

This article provides a complete guide to Brie and its nutrition profile, how it’s made, potential benefits, and how we can use it.

What exactly is it about Brie that makes it one of the world’s most popular cheeses? 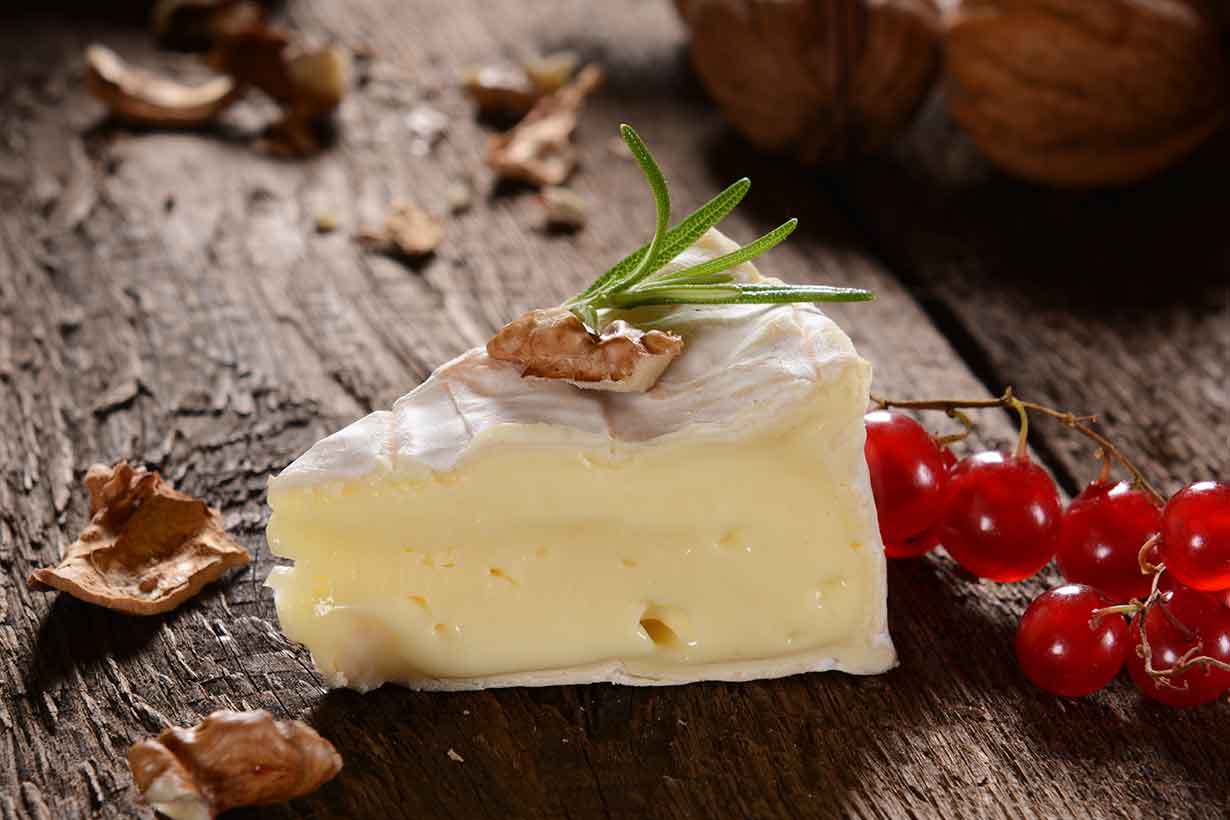 Brie is a soft cheese that originated in Brie, part of the region of Seine-et-Marne in Northern France.

The cheese has a cream to pale yellow color, and a greyish-white rind surrounds it. This rind comes from a type of white mold called Penicillium camemberti, which is perfectly safe and edible.

Since it is a soft cheese, Brie has a relatively high fat and lactose (milk sugar) content compared to harder varieties of cheese.

Brie has a soft and slightly spongy texture with a mild and creamy taste, and the cheese usually sells in wheels or slice portions.

It is thought that Brie de Meaux production has been ongoing since as far back as the 8th century. However, less is known about the origins of Brie de Melun.

Both of these official French varieties of Brie are made with raw (unpasteurized) milk, but Brie produced in other countries—particularly the United States—is pasteurized by law (1, 2).

Brie and Camembert—another famous French cheese—look very similar, and they are both types of soft cheese.

However, there are some key differences between the two. The first of these is that Brie has a higher fat content due to the addition of cream. This increased fat content also gives the cheese a creamier taste.

There are two reasons for this; one is that a larger quantity of bacterial starter cultures are used during Camembert production (3).

Additionally, the size of a Brie wheel of cheese is much larger than a Camembert wheel, which means the rind of mold has a higher density.

For more on Camembert, see this guide here.

Key Point: Brie is a French cheese with a soft texture and a mild flavor.

How Brie is made

The website ‘Cheese Making’ provides a glimpse of how to make a traditional Brie cheese.

To summarize the production process, those producing the cheese must follow these steps:

Interestingly, the nutritional values of cheese can significantly vary depending on the specific variety of cheese.

For example, soft cheeses such as Brie are not as energy (and nutrient) dense as harder cheese varieties such as Cheddar and Parmesan.

Based on data from the USDA’s FoodData Central database, here are the full nutritional values for Brie per 100 grams (4).

Key Point: Brie is a rich source of protein, fat, vitamins, and minerals.

Brie is a reasonably nutrient-dense cheese. Due to the nutrients it contains, it may offer some health benefits.

Brie is a good source of essential nutrients

As shown in the nutritional values, Brie contains significant levels of B vitamins, particularly vitamin B12.

These vitamins play an important role in energy production, producing new cells, and maintaining the health of the body’s cells and tissues (5, 6).

Additionally, Brie is also an excellent source of retinol, which is the bioavailable form of vitamin A (7).

Vitamin A is a crucial vitamin for human vision, and it is a critical nutrient for the immune system (8).

Brie contains a good amount of several minerals too, and these include calcium, phosphorus, selenium, and zinc.

These minerals have numerous functions within the human body, but calcium is particularly important as it is classed as a “shortfall nutrient” in the United States (9).

In other words, this means calcium is one of the nutrients that most of the population does not consume in adequate quantities.

Global daily intake of calcium generally falls below recommended levels too, and this includes developed countries such as Canada, the United Kingdom, and the United States (10).

Cheese is one of the best dietary sources of menaquinones, and research demonstrates that Brie provides approximately 125 ng of these compounds (14).

However, it is worth noting that harder, longer-aged cheese options such as Gouda and Stilton cheese offer much higher levels of this vitamin.

With approximately 21 grams of protein per 100 grams, Brie is an excellent source of protein (4).

Similar to other animal-based foods such as dairy and meat, the protein found in Brie (and all cheese) is highly bioavailable (15).

Overall, Brie is a healthy and nutritious food that can contribute important nutrients to the diet.

That said, some potential drawbacks may be an issue in some situations.

Brie has a relatively low lactose content that falls somewhere between 0-2% by weight, depending on the specific cheese.

Generally speaking, the vast majority of people with lactose intolerance are thought to be able to tolerate such small amounts of lactose.

For instance, studies have demonstrated that most people with lactose intolerance can tolerate up to 12 grams of lactose in one intake (16).

However, people with severe lactose intolerance may wish to speak with their doctor before trying Brie.

According to the ‘Food Safety’ website of the United States government, Brie made with unpasteurized milk is a risk factor for a foodborne illness called Listeria (17).

However, it should be noted that cases of severe foodborne illness from Brie consumption are very rare.

For instance, in France, there are only a handful of cases annually despite the yearly consumption of Brie standing at an estimated 17 million servings (18).

Additionally, the Centers for Disease Control and Prevention (CDC) do not class Brie made from pasteurized milk as being a risk factor for Listeria (19).

Key Point: In very rare cases, Brie made with unpasteurized milk has been linked to a foodborne illness called Listeria.

How to use Brie

Brie is a delicious and versatile cheese, and there are many different ways in which we can use it.

The cheese can work well whether served hot, cold, by itself, or as part of a dish.

Here are some easy (and tasty) ways to use Brie.

1) Baked Brie with fruit and nuts

After heating, the center of Brie becomes soft and gooey inside the rind.

For this reason, baking Brie is a popular way to eat the cheese, and there are hundreds of recipes for this on the Internet.

One simple recipe is to place the Brie in a small, circular oven dish and top with fresh fruit and nuts.

2) Serve as part of a cheese platter

Brie also tastes delicious cold, and it makes an excellent addition to any cheese platter.

Just combine the Brie with a variety of cheeses and other typical platter ingredients (such as cured meat, nuts, and fruit).

Since Brie becomes sticky and runny when hot, it is easy to make a dipping sauce with the cheese.

For a simple way to make this, add equal parts Brie and cream cheese to a bowl or pot, then add some favorite spices (garlic and thyme is good). After this, heat and stir gently until the mixture forms the consistency of a dip.

Instead of baking Brie topped with fruit and nuts, try topping it with some tasty herbs and vegetables.

Key Point: There are many different ways to use Brie, and all of them taste great.

Brie is one of the world’s most popular kinds of cheese for a good reason: it tastes delicious.

As a bonus, this tasty French cheese also offers some good nutritional benefits, and it is an excellent source of protein, B vitamins, and minerals.

For more on cheese, see this guide to some of the most famous varieties from around the world.

2 thoughts on “What Is Brie Cheese? A Complete Guide”