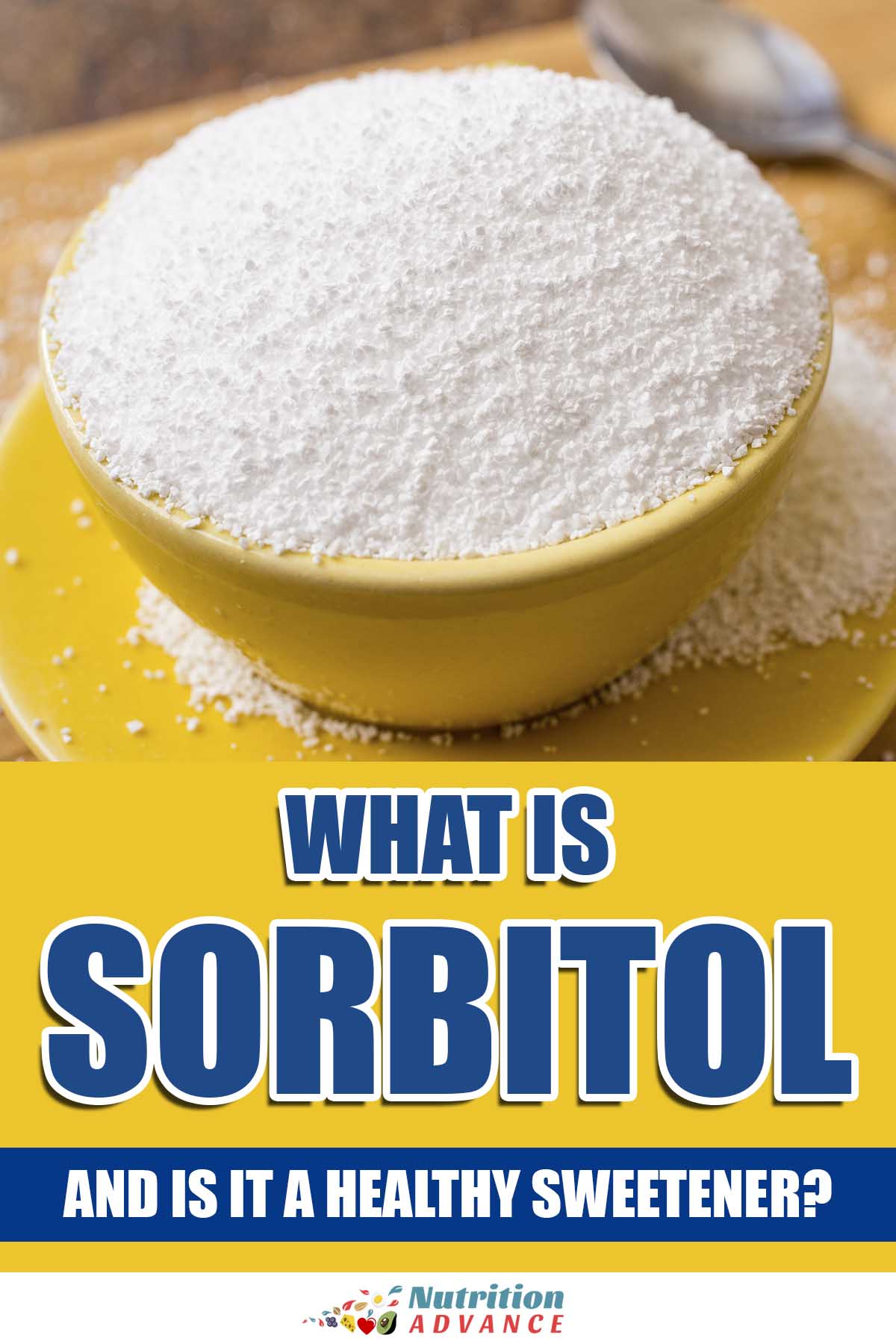 Sorbitol is a sweet-tasting sugar alcohol which enjoys popularity as a low-calorie sweetener.

However, is it a safe choice of sweetener?

In this article, we look at precisely what sorbitol is, its production process, and the sweetener’s potential benefits and side effects. 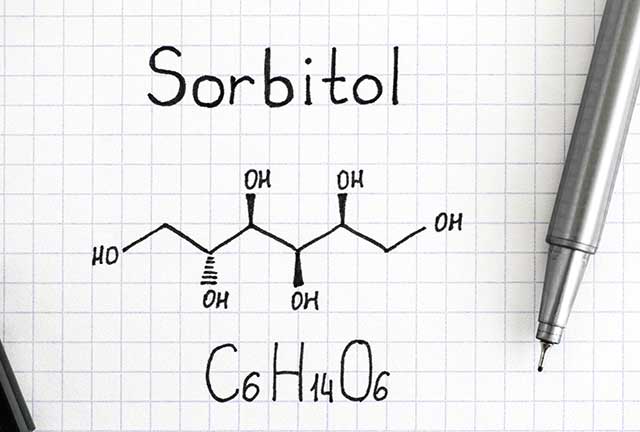 Sorbitol is a type of sweetener that belongs to a class of compounds known as sugar alcohols, also referred to as polyols.

Otherwise known as glucitol, sorbitol is much lower in calories than regular table sugar, and it is also lower on the glycemic index.

The glycemic index is a system that we can use to understand the potential impact of a carbohydrate source on blood sugar levels.

In the glycemic index, foods are ranked by their level of impact on raising blood sugar levels. A rating of 0 is the lowest possible score, while 100 is the highest and equivalent to pure glucose (2).

Sorbitol has a glycemic index of only 9, which suggests that it should have little impact on blood glucose levels (1).

The sweetener is approximately 50-70% as sweet as sucrose (table sugar), and it has a similar appearance too. In the above image, you can see that sorbitol is a white crystalline powder (3).

Sorbitol has a pleasant flavor with no strong aftertaste, and like other sugar alcohols, it provides a cooling sensation in the mouth.

Generally speaking, the food industry uses sorbitol in the production of sugar-free desserts and candy.

Sorbitol also enjoys widespread use in bakery products as well as for home baking.

When sorbitol is an ingredient in packaged foods produced within the European Union, it may be listed on the ingredients by the ‘E number’ E420 (4).

How Is Sorbitol Produced?

First of all, sorbitol is a naturally-occurring compound, and we can find it in fruits such as cherries, plums, pears, raspberries, and strawberries (5, 6).

However, commercial production via the hydrogenation of starch is the most common way to make sorbitol.

This production process may use raw materials such as corn, potatoes, sorghum, or wheat (7, 8).

To briefly summarize, the production of sorbitol follows the process below (7, 9);

Key Point: The commercial production of sorbitol involves refining and hydrogenating starch from tubers or grains.

Most of the potential benefits that come from using sorbitol are because it isn’t sugar.

In other words; it results in a smaller glycemic response, and it isn’t as bad for oral health.

As previously mentioned, sorbitol has a glycemic index of 9.

Additionally, sorbitol is not fully digested, which also lowers its potential impact on blood sugar levels. Specifically, research shows that the small intestine only absorbs around 50-79% of total sorbitol (12).

As is the case with all sugar alcohols, if not absorbed in the small intestine, sorbitol passes to the colon. In the colon, bacteria ferment sorbitol into short-chain fatty acids such as butyric acid (13, 14).

Since we do digest more than half of the sorbitol we consume, there will be a glycemic response, and the sweetener should, therefore, raise blood sugar levels.

In a study featuring insulin-treated diabetics, there were no differences in blood glucose response between two test meals consumed by patients (15):

For this reason, the researchers classed sorbitol as not being an “acceptable sweetener” for diabetics.

However, another trial featuring healthy participants found that 20 grams of sorbitol alone did not lead to a blood-glucose or insulin response (16).

A further study found that sorbitol intake alone had a “very small” impact on raising blood glucose. In the study, pure glucose had a “significantly larger” effect (17).

Better For Dental Health Than Sugar

The potentially damaging effects of sugar on caries formation and overall dental health are well-publicized (20, 21).

However, replacing sugar with sorbitol can have some beneficial effects in this regard.

For instance, unlike how they make use of sugar, most oral bacteria cannot ferment sorbitol into tooth-eroding acids (22).

Furthermore, several clinical trials demonstrate that using sorbitol as a sugar substitute can reduce the incidence of caries (23).

That said, there is one form of oral bacteria, called Streptococcus mutans, that can slowly ferment sorbitol (24).

Erythritol and xylitol, which are not fermentable by oral bacteria, are more effective for promoting dental health (25, 26, 27).

Key Point: Although other sugar alcohols have better outcomes for decreasing caries, sorbitol is much healthier than sugar for dental health.

Although sorbitol has ‘generally recognized as safe’ status from the FDA, the sweetener may have several dose-dependent side effects.

For most people, minimal amounts of sorbitol are unlikely to cause gut issues.

However, larger intakes of sorbitol can cause a range of symptoms in some individuals which may include (28);

In one trial featuring 124 healthy adults, 10 grams of sorbitol led to 32% of the participants experiencing such abdominal symptoms (29).

Furthermore, in another trial with 30 healthy participants, 100% of participants showed signs of sorbitol malabsorption at doses over 20 grams (30).

This same study also tested sorbitol on patients with untreated coeliac disease. In these individuals, just five grams of sorbitol resulted in malabsorption.

Key Point: In summary, anything other than small doses of sorbitol is capable of causing digestive distress.

Another potential downside of consuming sorbitol is that it can have a laxative effect, particularly in higher doses.

In an early study, 25 grams of sorbitol split throughout the day caused a laxative effect in 5% of 101 participants (31).

Based on rodent studies, researchers believe intestinal malabsorption of sorbitol is the reason for the laxative effect (32).

Sadly, some case studies show that patients have been admitted to hospital due to persistent diarrhea and extreme weight loss caused, unknowingly, by sorbitol consumption (33).

In these patients, they had been consuming around 20 grams of sorbitol per day in chewing gum and sweets. Their symptoms resolved after beginning sorbitol-free diets.

Key Point: Sorbitol may have a laxative effect in some individuals.

Sorbitol Is a FODMAP

FODMAPS is an abbreviation for Fermentable Oligosaccharides, Disaccharides, Monosaccharides and Polyols. These are certain types of carbohydrates found in some fruits and other plant foods.

Unfortunately, sorbitol is a polyol (sugar alcohol) and therefore a type of FODMAP.

For this reason, it is unsuitable for low-FODMAP diets (39).

Key Point: Sorbitol is not suitable for low-FODMAP diet plans.

Overall, sorbitol has a nice taste, and using it as a sugar replacement may offer some benefits.

The most notable of these is its potential to help improve oral health and better control blood sugar levels.

However, sorbitol has well-documented side effects at lower doses than most other sweeteners.

For this reason, it may be better to look at alternative sweeteners that are better tolerated.

Generally speaking, sweeteners such as stevia, erythritol and xylitol have less pronounced side effects compared to sorbitol in this regard.

1 thought on “What Is Sorbitol and Is It a Safe Sweetener?”