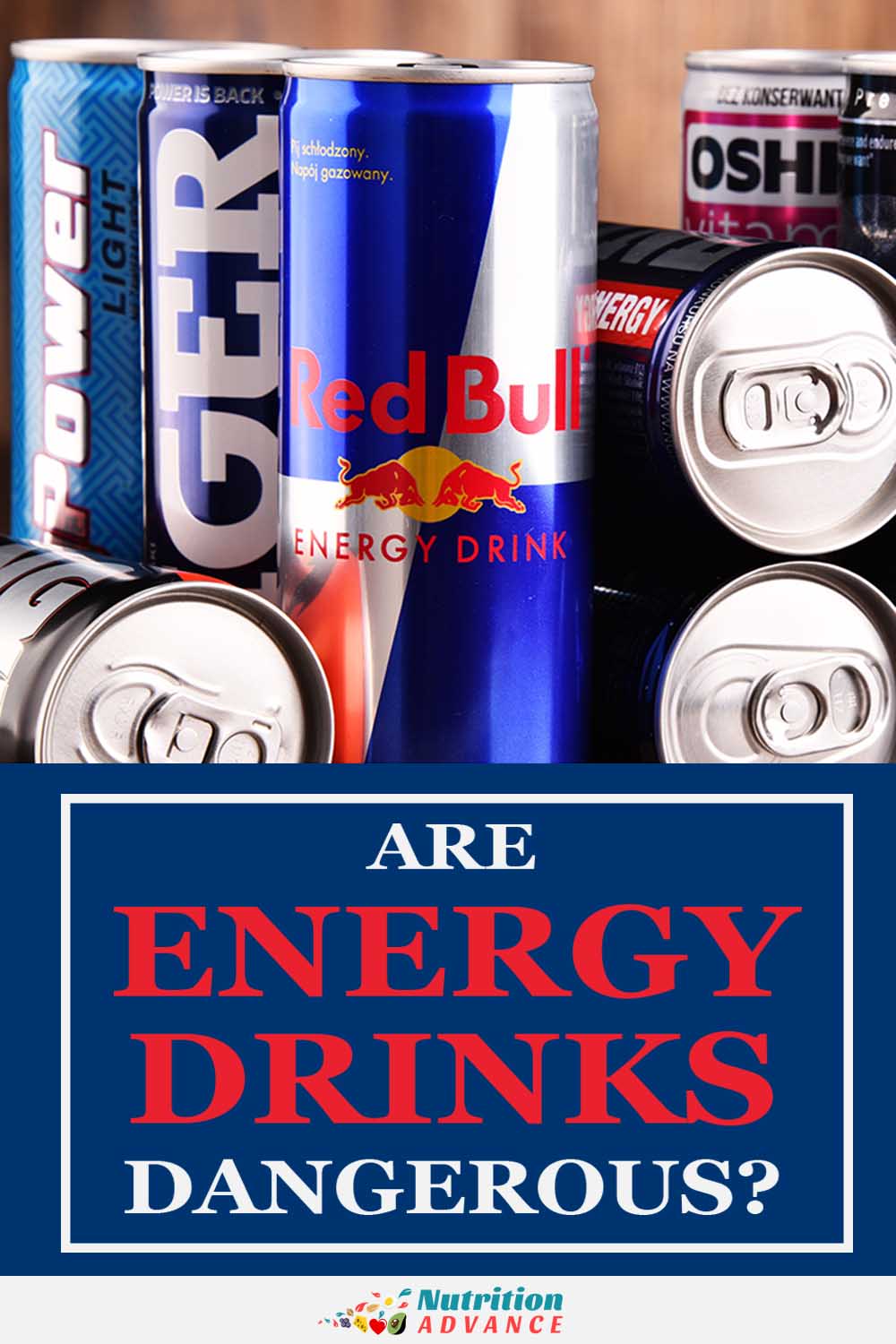 The popularity of energy drinks has increased a lot in recent years, particularly among teenagers and younger adults.

Furthermore, we can see a constant stream of stories in the media about energy drinks, and most of this news is negative.

The question is: despite being a trendy type of drink, are energy drinks really dangerous?

This article investigates the issue, examines the ingredients in energy drinks, case studies, and what the data from scientific research shows.

What Are Energy Drinks?

First of all, let’s define what an energy drink is.

Despite their caffeine content, drinks such as coffee, tea, and cola are not typically thought of as ‘energy drinks.’

Generally speaking, the producers of energy drinks market the products for the energy they provide to boost physical or mental performance. In this regard, the words ‘energy’ and ‘caffeine’ are usually prominent on the packaging of these products.

Most energy drinks include caffeine and sugar or sweeteners, carbonated water, and various flavorings. Additionally, there are many available flavors, and the packaging of energy drinks is usually quite colorful.

People use energy drinks for focus, energy before exercise, or just for taste preference. The drinks are trendy among young people.

Some of the most famous brands of energy drinks include Bang, Monster, Red Bull, and Rockstar.

Key Point: Energy drinks contain high amounts of caffeine and they are marketed for their energy provision. A wide range of products exists within the category.

Energy Drinks In the News

It is easy to see articles and videos in the news about the effects of energy drinks.

For example, here are some recent headlines on the issue:

These headlines represent just a small selection of the stories on the topic.

However, it is important to note that millions of people consume energy drinks without incident.

Is it a case of ‘the dose makes the poison,’ as with many different foods and medicines that can potentially be “bad” for us?

One of the questions we should look at is how much caffeine is in energy drinks, and at what intake level are they potentially dangerous?

Key Point: There are lots of scary stories in the media about energy drinks. These stories suggest that energy drinks can have negative effects when consumed in excess.

How Much Caffeine Is In Energy Drinks?

The amount of caffeine in energy drinks can significantly vary from brand to brand.

However, the following table shows the caffeine content of some of the most popular energy drink varieties.

As the table shows, a popular energy drink can contain as much as 300 mg of caffeine (Bang Energy, U.S.).

How do these amounts of caffeine compare to other caffeinated drinks?

Based on a study published in the Journal of the American Dietetic Association, here is the average caffeine content of black tea and brewed coffee (7):

Additionally, a study published in the Journal of Analytical Toxicology demonstrated that the caffeine content of carbonated soda drinks ranged from 0 mg to 48.2 mg per serving (8).

Based on these data, a can of Bang Energy containing 300 mg caffeine would be equivalent to:

This comparison shows how easy it is to consume significant amounts of caffeine if consuming multiple energy drinks daily.

How Much Caffeine Per Day Is Safe?

According to the U.S. Food and Drug Administration (FDA), up to 400 mg of caffeine per day is considered safe for healthy adults (9).

400 mg of caffeine is equivalent to 2.5 cans of Monster Energy (assuming no other caffeine sources throughout the day).

However, it only takes one can and a third of the U.S. version of Bang Energy to hit the 400 mg recommended limit.

How much caffeine per day do energy drink users typically consume?

We can look to a recent large study that investigated caffeine intake levels amongst energy drink users to answer this question.

The American Journal of Preventive Medicine published this study, which examined ‘Trends in Energy Drink Consumption Among U.S. Adolescents and Adults, 2003-2016’. This study featured 33,259 adults, providing a significant sample size.

Thus, it is clear that energy drink users have a higher mean caffeine intake than non-users.

What Ingredients Do Energy Drinks Contain?

Most media attention on energy drinks relates to their high caffeine content.

However, what other ingredients do these drinks contain?

Research has shown that each ingredient is generally safe in amounts used per serving.

However, there has been little research on the potential combined effect of these ingredients, which will hopefully change in the future.

Key Point: Energy drinks are not just caffeine, and they can contain a range of different ingredients.

According to the 2013 DAWN report, published by the Substance Abuse and Mental Health Services Administration (16):

From this data, we can ascertain that 12,131 hospitalizations in 2011 were due to energy drinks.

However, the report didn’t confirm how many of these cases were seen in otherwise healthy adults without underlying conditions.

For example, lower doses of caffeine can be more of a concern for individuals with underlying (possibly undetected) cardiovascular issues (17, 18).

When Are Energy Drinks Potentially Dangerous?

Two of the most important factors when considering the potential dangers of energy drinks include:

As mentioned previously, many hospital visits related to energy drinks are due to a high intake of these drinks.

Additionally, underlying conditions seem to be a relatively common occurrence.

For example, here are some of the particulars from case studies of individuals seeking medical attention for energy drink-related cardiovascular abnormalities:

The takeaway points we can make from these case studies are:

Key Point: Case studies indicate that large intakes of energy drinks can be dangerous, particularly for individuals with pre-existing conditions.

It Is Important To Interpret These Results With Care

As we can see, energy drinks can cause some adverse effects. However, it is crucial to put these results into the proper context.

Most energy drinks provide an amount of caffeine between 80 to 200 mg. On this note, an Americano coffee from Starbucks provides 75mg to 300 mg caffeine, depending on the cup size (28).

This comparison is important because human trials have shown that the administration of coffee can also lead to similar short-term increases in blood pressure and heart rate (29).

Interestingly, though, habitual intake of coffee does not appear to have these same blood-pressure-increasing effects.

Thus, could some of the effects from studies showing adverse reactions from energy drinks be due to non-habitual use of caffeine? Unfortunately, this is difficult to determine from many of the existing studies.

Notably, one recent (2021) study conducted a trial on energy drinks that did differentiate between habitual and non-habitual caffeine users (31).

Published in the Clinical Nutrition ESPEN journal, the trial involved 48 students from Adnan Menderes University. The participants were split into four groups: a control group and three groups based on their habitual caffeine intake (low, medium, high).

The researchers then took the participants’ blood pressure and heart rate readings one hour after they consumed a 473-ml can of Red Bull.

However, these measures did not alter in the high-habitual caffeine consumers group, who had a mean intake of 449 mg caffeine per day.

This study suggests that energy drinks may have more of an effect on blood pressure and heart rate in individuals who are non-habitual caffeine users, similar to the research on coffee.

As for future research, the researchers behind the study plan to undertake further studies with different energy drinks and varying caffeine doses to provide more clarity.

Key Point: Energy drinks lead to changes in blood pressure and heart rate approximately one hour after consumption. However, one trial found that these changes do not occur in habitual caffeine consumers.

Over-consumption of Energy Drinks Is Problematic

It is unlikely that the sensible use of energy drinks (i.e., one can of Monster Energy) will cause issues for otherwise healthy adults.

However, numerous case studies are showing that a high intake of energy drinks, particularly over a sustained time period, can cause problems (32).

Some of this excessive intake may be due to young people not recognizing the dangers of too much caffeine.

A 2017 United Kingdom-based qualitative study analyzed children and young people’s perception of energy drinks. Here are some of the statements gathered from children aged between 10 and 14 years old (33):

From these responses, we can see that energy drinks appeal to children and young people.

According to the survey responses: the price point, marketing, and taste all contribute to the desirable traits of energy drinks for this age group.

In their concluding comments, the researchers behind this qualitative study remarked: “These findings provide support for policy-level interventions that seek to change the behaviors of manufacturers and retailers as well as consumers, and actively involve children and young people as far as possible” (33).

It is also likely that energy drinks are easier to over-consume for young people due to their accessibility.

Although coffee shop drinks such as espresso, Americano, and latte can contain more caffeine per serving, they are significantly more expensive.

Energy Drink Use Is Prevalent Among Young People

A 2015 United States-based cross-sectional study looked at the usage and perception of energy drinks among 779 youths aged 12 to 17 years old (34).

Among its findings, this study determined that:

Additionally, an earlier 2011 study on the health effects of energy drinks on children and young adults noted that (35):

Key Point: Energy drinks are cheap and affordable, and they are popular among young people. Younger people may be more likely to underestimate the caffeine content (and the effects) of energy drinks.

Overall, from looking at the existing research, it is clear that energy drinks have the potential to be dangerous.

However, a significant proportion of the adverse results are related to excessive intake, thus excess caffeine consumption.

When used in recommended amounts, there is no conclusive evidence at this point to suggest that energy drinks are uniquely dangerous.