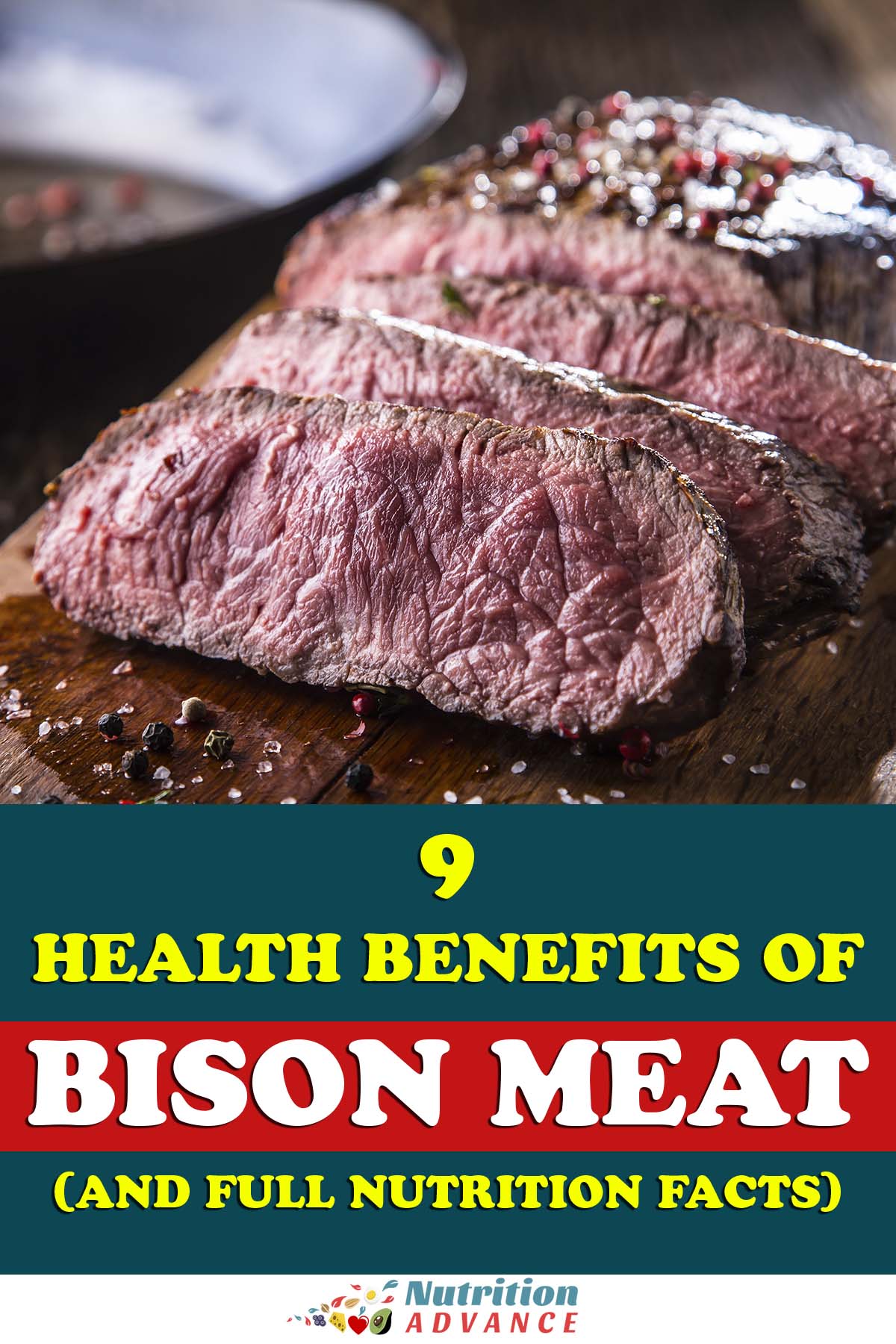 Bison is extremely nutritious yet low in calories.

While bison is as nutrient-dense as red meat, it is similar to white meat regarding its calorie and fat content.

This article provides a complete guide to the nutrition profile and health benefits of bison meat.

What Is Bison Meat?

Bison refers to the meat of an animal going by the same name.

Sometimes referred to as America’s “original red meat,” an estimated 60 million bison used to roam the American countryside. In modern times, this number is thought to average around 500,000 (1).

While this may sound a large number, the beef cattle population of the United States puts it into perspective; it is currently higher than 31.7 million (2).

Given this significant disparity, bison can be more difficult to source than beef.

Generally speaking, bison graze on fresh pasture rather than being factory farmed like some cattle and swine, although they are sometimes ‘grain-finished’.

Bison meat has been experiencing a boom over recent years owing to its perceived health benefits. In fact, sales have seen double-digit growth on a yearly basis (3).

Bison is similar in taste to leaner cuts of beef, and it is one of the leanest meat products.

Since bison has a much lower fat content, it has a slightly drier texture with an earthier flavor.

However, the meat is still quite tender providing it is cooked properly.

The tables below show the full nutritional profile of bison per 100 grams, for raw and cooked meat respectively (4, 5).

As shown, bison is protein-dense and offers a small to moderate amount of dietary fat.

Key Point: Bison is an excellent source of protein, B vitamins, zinc, and selenium.

There are several ways in which bison meat is good for you, and these mainly relate to the nutrition profile.

1) A Rich Source of Protein

Bison has one of the best protein densities among all common types of meat.

The reason why bison is such protein-dense meat comes down to the fat content, and bison is typically a minimum of 90% lean.

For anyone wanting to leverage the protein in meat, this makes bison an excellent choice.

Similar to all meat, bison is a “complete protein,” meaning that it contains adequate amounts of all essential amino acids.

In other words, bison is an excellent way to get a highly bioavailable source of protein into our diet.

Key Point: Bison is one of the best dietary sources of protein.

Notably, meat from pasture-raised animals has a higher proportion of omega-3 fatty acids (6).

In this regard, studies show that bison meat has more omega-3 (and less omega-6) than meat from factory-farmed animals. To be specific, grass-fed bison meat has an omega-6 to 3 ratio of only 3:1 (7, 8).

Researchers note that a lower ratio of omega-6 to omega-3 may have a wealth of health benefits, including a lower risk of obesity and inflammation (9).

Furthermore, a systematic review of 26 randomized controlled trials found that higher omega-3 intake is associated with lower markers of inflammation (10).

For an idea of how bison’s omega 6 to 3 ratio compares to other meat, the ratio for grain-fed, factory farmed pork can be higher than 20:1 (11).

Key Point: Bison offers a useful amount of omega-3 fatty acids, and it has a much better omega-6 to omega-3 ratio than most meat products.

Creatine is one of the most proven performance-enhancing sports supplements.

To be specific, creatine can help to improve high-intensity exercise performance and increase recovery time, as well as several other potential benefits.

However,  certain types of meat can provide this interesting compound too.

Wild game such as venison and bison are thought to be some of the best food sources of creatine.

In other words, an 8 oz (227 g) bison steak would offer approximately 1.4 grams of the compound.

According to the International Society of Sports Nutrition, a beneficial supplementary dose of creatine is 3-5 grams for most people.

Creatine can help to improve high-intensity exercise performance, increase recovery time, and it has several other potential benefits  (13).

Key Point: Bison has one of the highest concentrations of creatine among dietary sources.

4) Rich Source of B Vitamins

Bison offers an excellent concentration of B vitamins, and it is particularly high in cobalamin, otherwise known as vitamin B12.

Among these vitamins, B12 is especially important because a deficiency in this nutrient is quite prevalent in the population.

In one study conducted in Germany, researchers found that 27.3% of older adults had low levels of vitamin B12 (14).

B vitamins have a wide range of health benefits, and they are essential for energy production, optimal brain function, and the nervous system (15).

Key Point: Bison meat provides the full range of B vitamins. It is very high in vitamins B12, B3, and B6.

Firstly, a food being low in calories has no reflection on the respective health properties of that food.

As a simple example, a candy bar is lower in calories than an avocado, yet it is a less healthy choice.

However, opting for less energy-dense food can be an important factor in certain situations, such as losing weight.

For instance, an 8 oz (227-gram) serve of a fattier cut of meat, such as beef tenderloin, provides 735 calories. On the other hand, an equivalent amount of bison would only come to 406 calories – a significant difference (16).

To put it another way; bison offers just as many essential nutrients as fattier cuts of meat, but it is much lower in calories.

This nutrient-density can be important for anyone who is watching their total food/calorie intake.

Selenium is one of the two minerals that bison offers in particularly high amounts.

With bison meat providing 44% of the RDI per 100 grams of cooked weight, it is a significant dietary source of selenium (5).

Selenium has many vital functions in the body, and most notably it has an antioxidant role.

As a result, selenium may help to protect against oxidative stress and long-term inflammation/disease states (17).

Key Point: Bison is a rich source of the antioxidant mineral, selenium.

More research is necessary on food sources of this compound, but some studies suggest that it may play a beneficial role in weight loss and increasing lean mass (19).

However, most of the research on weight loss benefits is from CLA supplements rather than food sources, and the results are mixed.

Alongside pasture-raised cows, bison offers the highest concentrations of CLA (21).

Although it is not specifically a “health benefit,” the fact that bison are raised on pasture has several positive impacts.

As previously discussed, it may enhance the concentration of beneficial nutrients such as CLA and omega-3.

Grass-fed animals also contain less fat, which might be a benefit for anyone on an energy-restricted diet.

There is also the ethical side to consider, and bison grazing in their herd (and within their natural habitat) will certainly be happier than feedlot animals.

9) Packed With Iron and Zinc

Earlier on we looked at the selenium content of bison, but the meat is also full of iron and zinc.

Iron has numerous functions in the body, and it plays an essential role in energy metabolism and transporting oxygen around the body (22).

Likewise, zinc is also an important mineral, and it is invaluable for the immune system and growth and development. Zinc is also necessary for hundreds of enzymatic reactions within the body (23).

Key Point: Bison is a significant source of iron and zinc.

As we have seen, bison meat is very nutritious and it has numerous potential benefits.

However, there are some negative points too.

The demand for bison outstrips the supply, and market economics dictate the price.

As a result, bison is much more expensive than more common meats such as beef and pork.

If you can comfortably afford it, then bison is an excellent source of nutrients.

However, other red meat options like beef and lamb offer much better value for money.

Once again, due to limited supply, it can be more challenging to find bison compared to other red meat.

Bison is freely available in big stores such as Walmart and Whole Foods in the United States.

Unfortunately, bison is harder to source in other countries, and you may need to search for local suppliers.

For example, in the UK, there are many farms directly selling bison meat online. However, be prepared to pay a premium price for it.

Since bison is very lean meat with minimal fat content, the cooking method is crucial.

Overcooking bison can lead to the meat becoming too dry, tough and chewy.

If cooking a bison steak, stick to medium or medium-rare if you want tender meat.

For any other dish, such as a soup or stew, slow cooking at low heat is the best way to go.

Key Point: Bison can be expensive and difficult to source, and overcooked meat can be extremely tough.

Bison is nutrient-dense and provides an assortment of beneficial vitamins and minerals.

The meat is low in calories, very high in protein, and it can be delicious when cooked in the right way.

If you can find bison meat at an affordable price, then it is an excellent and highly nutritious choice of food.

That seems quite reasonable. Enjoy!