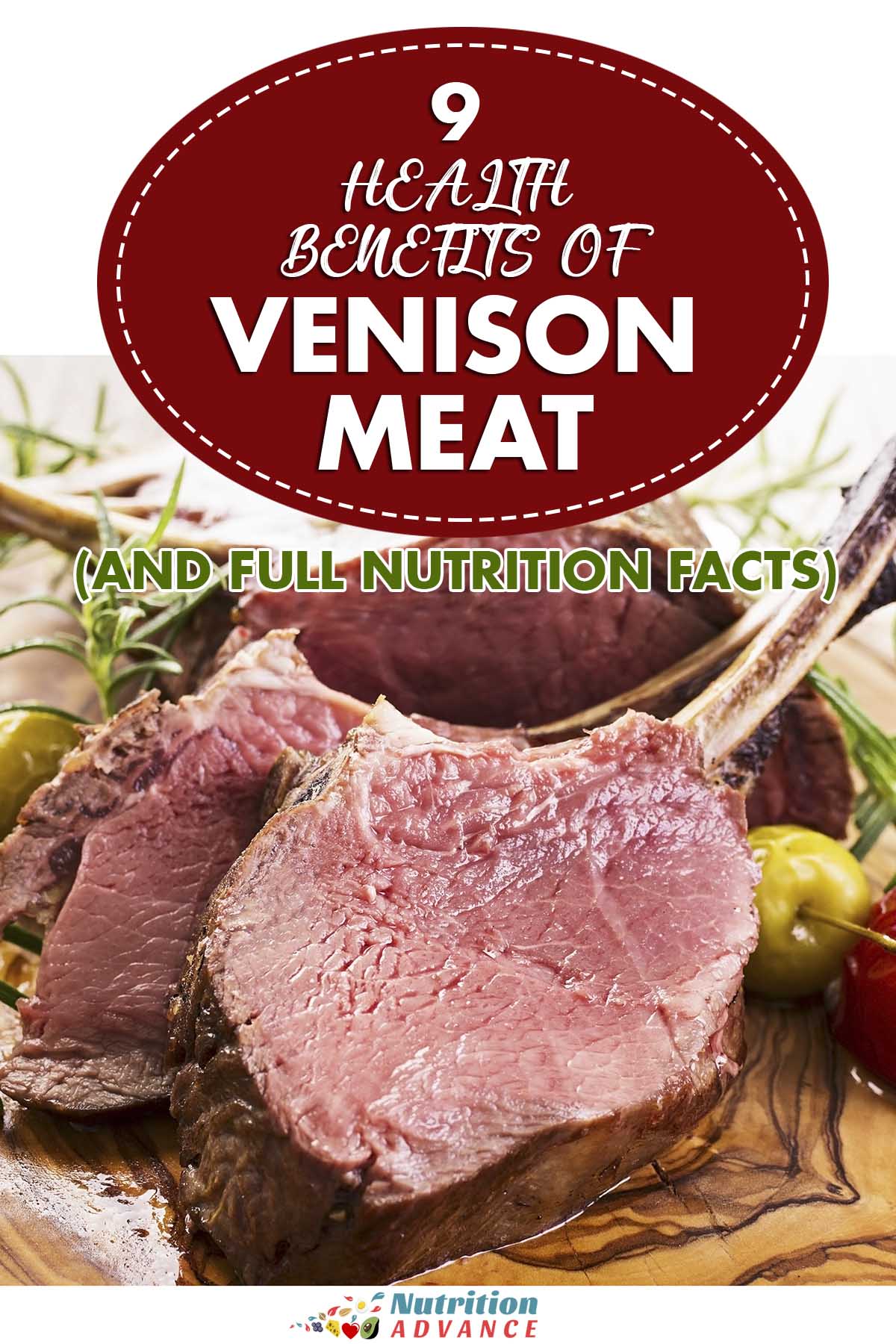 Venison refers to the meat of a deer, and it is a kind of red meat.

Although it is not as common as traditional meat like beef, chicken, and pork, sales have been growing in the Western world over the past few years.

Among the reasons for venison’s increasing popularity are the meat’s nutritional value and the fact it is more environmentally friendly than factory-farmed meat.

This article examines the nutritional profile of venison, its benefits, and potential concerns.

The following data is sourced from the USDA Food Composite Database and shows the nutrition profile for ground venison per 100 grams (1, 2).

In short, venison is low in both fat and overall calories compared to other common meats.

It is also slightly higher in calories, and it has a closer ratio of omega-6 to 3.

Venison meat is an excellent source of B vitamins.

Venison is a particularly good source of zinc, and it contains small to moderate amounts of most other minerals.

Key Point: Venison is a high-protein meat that is low in fat and total calories. B vitamins and zinc are the most significant nutrient the meat contains.

There are several benefits of eating venison, mostly revolving around the nutrients the meat offers.

For anyone wanting to increase their protein intake, venison is one of the best meats for this purpose.

As shown in the nutritional values, cooked ground venison provides 26.5 grams of protein per 100 grams (1).

Since venison is leaner meat than other options, it provides more protein too.

For example, the table below shows how a cooked half-pound (227g) ground venison patty compares to an equivalent from other ground meat varieties (3, 4, 5);

While the difference is only small, venison contains a slightly higher proportion of protein than other red meat.

Key Point: Venison is a rich source of protein.

2) Venison Is From Animals Raised on Pasture

The benefits of grass-fed meat have increasingly come into the public consciousness over the past several years.

While all meat—including conventional options—is nutritious, meat from pasture-raised animals has some extra benefits including (6, 7, 8);

Since venison comes from animals raised on pasture (ruminants), it will generally provide these added benefits.

Also, there is an animal welfare component to consider too. Generally speaking, animals raised in their natural habitat will be healthier and happier than animals found in factory farms.

3) Low In Calories and Fat

Firstly, there is no reason to fear fattier cuts of meat, and something being low-fat doesn’t mean it is better for us.

However, leaner cuts of meat can play a part in the diet when we’re looking to get more protein without increasing total calorie intake.

Since venison is lean meat and much lower in calories than typical cuts of beef, lamb, or pork, it is an excellent choice for this purpose.

Key Point: Venison is a low-calorie source of protein.

On a gram-for-gram basis, we already know that venison contains fewer calories than other red meat varieties.

Despite this, the meat contains higher amounts of beneficial vitamins and minerals, which makes venison an impressive source of nutrients.

Additionally, a recent study analyzed the chemical composition of meat from two species of deer versus two common species of cattle.

All of these animals were raised according to typical commercial farming practices.

Overall, the results showed venison to have a superior nutrient composition to beef. One notable finding was that venison meat had an average 5x higher amount of omega-3 than did beef (9).

Key Point: Venison appears to offer a higher amount of beneficial nutrients than other types of meat.

5) Venison Has An Excellent Omega-6 To Omega-3 Ratio

First of all, the omega-3 content of meat largely depends on the diet of the animal.

For example, animals that feed on grains have much lower concentrations of the fatty acid than meat from animals raised on pasture (10).

Since deer spend their life grazing on fresh pasture, venison typically contains a much higher amount of omega-3 than other meat, as well as a better omega-6 to omega-3 ratio.

On this topic, some researchers believe the overall amount of omega-6 to omega-3 we consume may have health implications.

While there is no conclusive evidence at this stage, some scientists hypothesize that excessive amounts of omega-6 may be pro-inflammatory and inhibit the anti-inflammatory benefits of omega-3. Others believe it is the total amount of omega-3 that is most important (11, 12, 13).

Either way, venison is rich in omega-3, and it has one of the best ratios of omega-6 to omega-3 out of all meat.

The table below shows the omega-6 to 3 ratios of venison. You can also find several other meat varieties to see how venison directly compares to them (2, 3, 4, 5, 15);

Regarding the figures in the table, it is worth noting that most commercial beef, chicken, and pork comes from grain-fed animals.

However, venison offers the best omega-6 to 3 profile from these meat choices.

6) Venison Is Full of B Vitamins

Generally speaking, all red meat is an excellent source of B vitamins, and venison is no exception.

B vitamins play a host of essential roles in the body.

Among their functions, B vitamins are responsible for converting food to energy, and they play a part in DNA synthesis, hormone production, and more (16, 17).

Key Point: Venison is a significant source of B vitamins.

According to research, approximately 17.3% of the world’s population is at risk for zinc deficiency (18).

Also, around 40% of the elderly population (60 years and over) of the United States has an inadequate zinc intake (19).

Venison contains a large amount of zinc, and a typical 6 oz (170-gram) serving offers 48% of the reference daily intake (1).

Zinc has important functions in almost every system in the body, and it is particularly important for a well-functioning immune system (20, 21).

We can find conjugated linoleic acid (CLA) in various types of meat.

While all meat contains this fatty acid, meat from animals raised on pasture, such as venison, provides significantly higher amounts (22).

Interestingly, some studies suggest that CLA may potentially have a protective effect against cancer as well as benefits for heart health.

For example, cell culture studies have demonstrated that CLA can inhibit the spread of cancer cells. However, results from such studies cannot be assumed to have the same effect in humans, and more research via human trials is necessary and s.

Another study showed that there is a significant association between higher circulating blood levels of CLA and a lower risk of heart failure  (23, 24).

There are also claims that CLA may have weight loss benefits. However, there is not a lot of evidence to substantiate this, and research on CLA supplements has thus far been disappointing in human trials.

Key Point: Venison provides a good source of CLA, which may have benefits for human health.

With all the focus on the carbon footprint of meat in recent times, sustainability is a hot issue.

First, a lot of negative claims about meat are exaggerated by those with an agenda, but it is probably fair to say that factory farmed meat is resource intensive.

However, ruminants raised on regenerative pasture are at the other end of the scale, and they offer numerous benefits including (25, 26, 27);

On this note, venison is one of the most environmentally friendly ways to eat meat, and the meat comes from animals living in their natural habitat

Key Point: Venison is one of the most sustainable kinds of meat money can buy.

Are There Any Health Concerns About Venison Meat?

For people buying venison from a large store, it is unlikely there is anything to worry about as it should be responsibly sourced and tested.

However, venison is considered game meat, and it is one of the more popular hunting options.

As a result, many people either source venison themselves or buy it directly from a hunter.

One potential issue to be aware of here is that some wild deer have a condition known as chronic wasting disease (CWD).

This is a type of prion disease of the brain similar to Creutzfeldt-Jakob disease (‘mad cow disease’).

At present, the disease is present in free-ranging deer in Canada, Norway, and the United States (28).

For reference, the map below shows the counties with confirmed cases in the US;

Is CWD a Danger To Humans?

First of all, there are no confirmed cases of CWD in humans, so it is unknown whether the disease can jump species to humans (29).

However, studies show that the disease can spread to non-human primates like monkeys if exposed to infected meat (30).

As a result, it is probably sensible to err on the side of caution and follow standard prevention recommendations.

The Centers for Disease Control and Prevention have published a ‘prevention’ guide here.

Venison has a lot of great benefits; it is nutrient-dense, sustainable, and from animals living in their natural environment.

Providing venison meat is responsibly sourced, it is a healthy and nutritious option.

For more on red meat, see this guide to bison meat and its benefits.