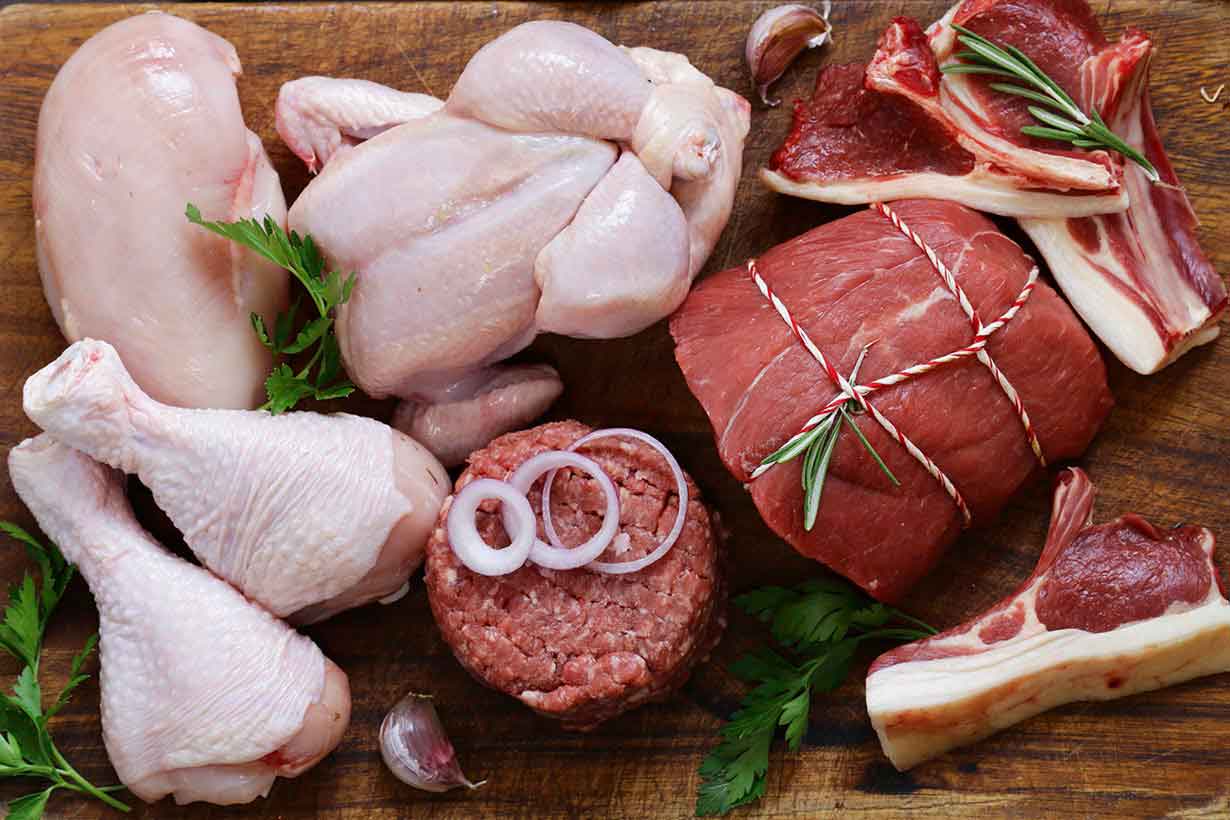 Among the different types of meat, red meat tends to be the most controversial.

In this regard, we can often see media articles urging us to replace meats like beef and lamb with poultry or plant-based options.

But is cutting out red meat a good idea? And is white meat a better choice?

This article examines the key differences between red and white meat.

What Is Red Meat?

The simplest definition dictates that meats which are red in their raw state are ‘red meat’.

However, we can also define red meat by its high myoglobin content.

Myoglobin is a type of protein found in meat which has a deep red color (1).

In fact, the red liquid you often see in a pack of meat isn’t blood; it is a combination of myoglobin and water.

Put simply; the more myoglobin a meat contains, the darker red it will be. Some examples of red meat include beef, bison, lamb, pork, and venison meat.

Beef steak is probably the most famous red meat of all, and when it is cooked well, it is also one of the most popular foods in terms of taste.

The ‘healthiest’ way of eating red meat is in its unprocessed form, ideally served as part of a nutrient-rich meal.

How is Red Meat Good For You?

It’s widely accepted that red meat contains many important nutrients; specifically, protein, vitamin B12, and the minerals iron and zinc.

This is only a selection of the beneficial compounds we can find in red meat, and there are many more.

Notably, rates of iron deficiency anemia have been rising over recent years, particularly in younger women, effectively doubling between 2003 and 2012 in the United States (2).

As the most significant dietary source of iron, could falling rates of red meat consumption be playing a role?

There are also some worries that red meat may have negative impacts on our long-term health.

Furthermore, red meat has been listed by the World Health Organization as a “likely carcinogen” (5).

Part of these concerns specifically relate to the high-heat cooking of red meat, and others are about the curing process.

Key Point: Red meat has a higher myoglobin content and it is naturally red in its raw state. It contains many essential nutrients, but there are some concerns over negative health impacts.

What Is White Meat? 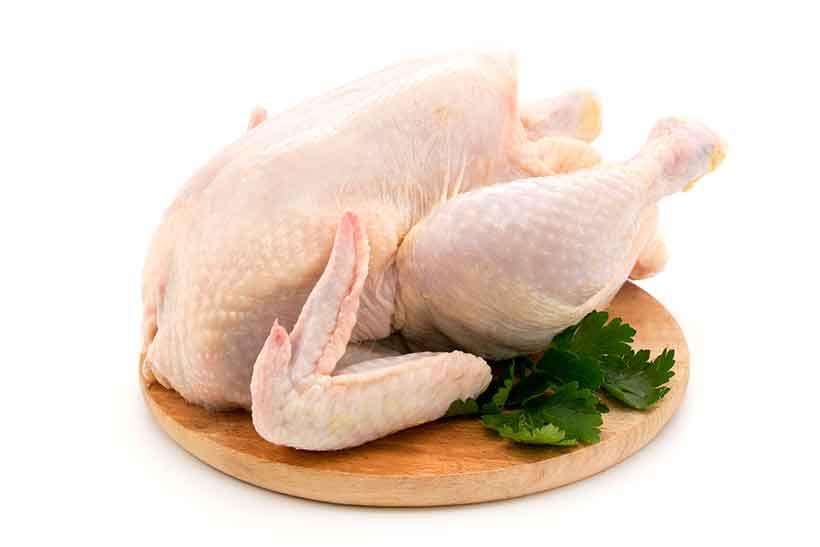 Sometimes this definition may also include fish, but people don’t generally consider fish as a “meat”, so for the purpose of this article we will focus on land animals.

It is also a myth that white meat doesn’t contain myoglobin. Poultry does contain this protein, but in a much lesser quantity than red meat does.

Some examples of white meat include chicken, duck, turkey, and other types of poultry.

For further information about poultry, see these guides below;

A Full Guide To Duck Meat

What Are Turkey’s Benefits and Drawbacks?

How is White Meat Good For You?

For one thing, it does not have the health concerns that red meat does, and so we often hear it suggested as a replacement.

Additionally, leaner cuts of white meat are among the highest dietary sources of protein.

Some people feel that white meat is an inferior source of nutrition than red meat.

While red meat may offer more in terms of essential nutrients, is the nutritional profile of poultry really so inferior?

Key Point: There are several alternate definitions of what white meat is. However, poultry meets this definition in all of them. Like all meat, white meat contains important nutrients.

In this section, we’ll look at the similarities and differences between red and white meat.

To make it fair, we will use the nutritional profiles of two red meats and two white meats;

Note: there is a full guide to the nutritional properties of all common meats here.

Let’s now examine how the above four meats contrast in terms of calories, carbohydrates, fat, protein, vitamins, minerals, and other bioactive compounds per 100g raw weight.

All nutrition data is sourced from the USDA’s FoodData Central database.

No meats contain any carbohydrate.

As shown in the table, beef and lamb—the red meats—tend to be higher in saturated fat and lower in polyunsaturated fats.

On the other hand, chicken and turkey are very low in saturated fat and higher in polyunsaturates.

Both red and white meat is a good source of protein.

Here is the vitamin content of all four types of meat based on the recommended daily value (% DV).

As we can see from this data, all meats provide a decent range of vitamins.

However, the major difference comes from the vitamin B12 content; red meat is a much bigger source of B12.

Vitamin B12 is an essential vitamin that, among other functions, is responsible for blood cell formation, neurological health and DNA synthesis (10).

Those suffering from a B12 deficiency (such as vegetarians and the elderly) are at greater risk for a variety of health problems (11).

Again, we can see that red meat provides a more significant range of minerals than white meat does.

However, all four of these meats are relatively nutrient-dense and a good source of minerals.

Key Point: Red and white meats are similar in terms of their macronutrient profile. However, there are some differences regarding micronutrients;  red meat tends to offer a greater quantity of vitamins and minerals.

In addition to the nutrient profiles, meat also contains a variety of bioactive compounds that infer health benefits.

How Do These Compounds Differ in Red and White Meat?

Per 100g, these compounds are present in the amounts shown in the table below.

In regard to CLA, there is a big contrast between different meats (e.g. beef vs. pork and chicken vs. turkey). For this reason, the highest dietary source of the compound has been listed.

Is Red Meat Bad For You? 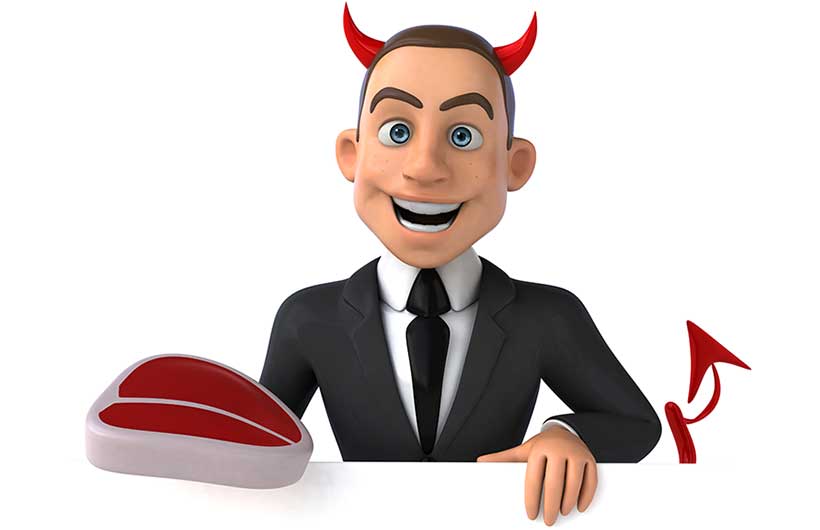 Now we have established that red meat may have a higher amount of beneficial nutrients and compounds, are there any drawbacks to consider?

The answer to this question is yes.

Long-term studies on red meat and health outcomes have identified associations between higher intake levels and the risk of colorectal cancer and cardiovascular disease (31, 32).

But there are potential confounding variables to consider. In other words, does red meat present the same degree of ‘risk’ as a home-cooked steak and vegetables compared to a fast food meal?

Meal 1: Steak, fresh vegetables, and a glass of water.

Meal 2: McDonald’s meal of a Big Mac with french fries and cola.

If the entire population was eating similar to meal 1, would there still be as strong support for these epidemiological risks identified with red meat consumption?

That said, some of the studies do adjust for these kinds of variables as best they can, and the associations between red meat and adverse health outcomes still exist.

This evidence-based review of red meat and its health effects provides further information.

Key Point: There are observational links between red meat consumption and cancer and cardiovascular disease.

Red Meat vs. White Meat: Which is Healthier?

First of all, all meat is nutritious and full of protein, nutrients, and other beneficial compounds.

The research shows that red meat is the superior of the two in terms of essential nutrient content, with the main advantage being the higher vitamin B12 content.

That said, the difference between red and white meat isn’t as wide as some people assume, and poultry is also nutrient-dense, and it is typically a better source of protein per calorie too.

All in all, both red and white meat offer their own nutritional benefits.

However, neither red nor white meat are the most nutrient-dense meat; that honor belongs to organ meat.

Is Steak a Healthy Choice? An Objective Guide To Red Meat

8 Types of Meat and Their Health Benefits

Is Pork Good or Bad For You?