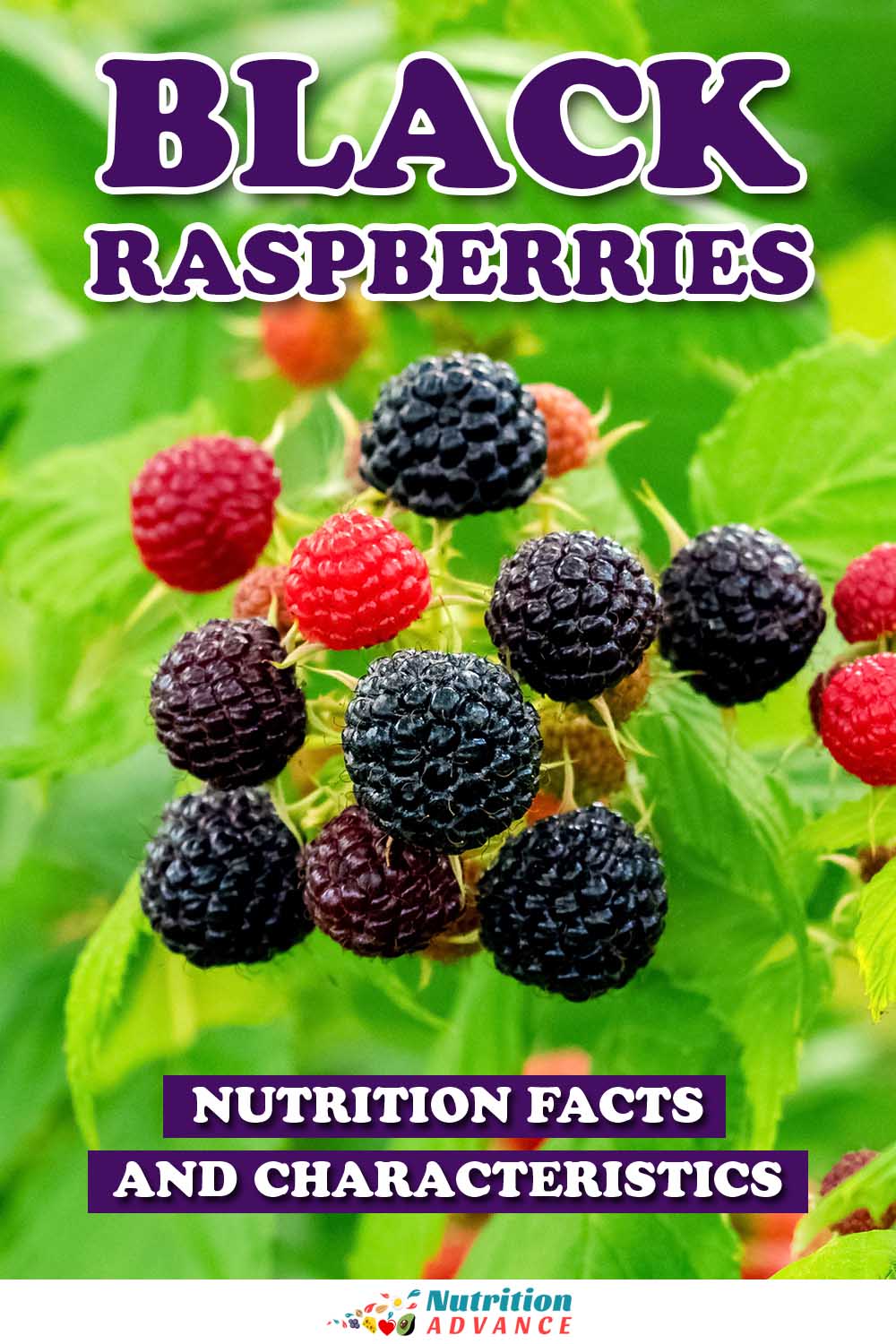 Black raspberries are not quite as common as red raspberries, but they are just as nutritious.

Furthermore, they may have some additional benefits compared to their red relatives based on their higher polyphenol content.

This article provides a complete guide to black raspberries, their characteristics, nutritional values, and potential benefits.

What Are Black Raspberries?

Black raspberries are also known as ‘blackcaps,’ and they are a berry variety native to North America.

Additionally, black raspberries have a milder, sweeter taste than blackberries.

Although black raspberries are produced commercially, they are more difficult to find than red raspberries.

Key Point: Black raspberries (Rubis occidentalis) are a species of raspberry. Their appearance looks partly like a raspberry and partly like a blackberry.

There are no significant nutritional differences between red and black raspberries concerning macronutrients and micronutrients. In other words, their carbohydrate, fiber, calorie, vitamin, and mineral content will be roughly similar.

The USDA does not have a separate nutrition data entry for black raspberries and classes all raspberries the same (3).

That said, scientific research suggests there may be a difference between the phytochemical content of red and black raspberries.

Phytochemicals are bioactive plant chemicals, such as carotenoids and polyphenols. Research has demonstrated that these phytochemicals can influence human health (4, 5).

Anthocyanins are a type of polyphenol characterized by their blue, red, purple, and black colors. We can also find them in foods such as blueberries and purple sweet potatoes.

Key Point: Black raspberries are nutritionally similar to red raspberries, but they have a higher polyphenol content.

Some inflammation is necessary for the human body, particularly for healing, repair, and protection against infection.

However, prolonged and chronic low-grade inflammation has been linked with various diseases, including type 2 diabetes and atherosclerosis (8).

The postprandial (post-meal) state is one time when inflammation levels can rise (9).

In the study, participants either consumed:

The study results demonstrated a statistically significant lower level of interleukin-6 (IL-6) in the participants who consumed the powdered black raspberry. IL-6 is a substance secreted by the immune system and a common marker of inflammation.

On the downside, this study was a small pilot study with only ten participants, so more extensive research is necessary to confirm this finding.

May Have Anti-Cancer Properties

Some preliminary research in animal models and cell lines has shown that black raspberry extracts can (11, 12, 13):

However, it is vital to note that these results are from studies using high-strength extracts in animal models and cell (test tube) studies.

In other words, these studies do not allow us to presume humans eating whole black raspberries would experience the same effects.

That said, the studies do show that black raspberries contain some interesting bioactive chemicals.

Thus, it would be a fair assumption that they may benefit human health.

Key Point: Black raspberry extracts have shown promising anti-cancer properties in cell and animal studies. However, these studies do little to tell us about the effects of whole black raspberry consumption on human health.

May Be Beneficial For Heart Health

Several studies have looked into the effect of black raspberry on markers of cardiovascular health.

In a 2016 randomized controlled trial, researchers split 51 participants with metabolic syndrome into two groups. Over twelve weeks, one group consumed 26,750 mg of black raspberry extract each day, and the second group took a placebo (14).

Another randomized controlled trial, published in 2015, evaluated the potential for black raspberry to lower blood pressure in 45 participants with prehypertension (15).

The participants were placed into either a moderate-dose black raspberry powder group (1500mg/d), a high-dose group (2500mg/d), or a placebo group.

Once again, these were high-strength extracts of black raspberries, making it difficult to predict (and the extent of) any potential benefit from consuming whole berries.

What Nutritional Values Do Black Raspberries Have?

First of all, here are the USDA’s nutritional values for a 150-gram cup of raspberries. All daily values have been calculated using USDA data and the FDA’s published daily values (16, 17).

Black raspberries are an excellent source of vitamin C, and they contain a broad range of vitamins at small to moderate levels.

Black raspberries offer a good source of copper and magnesium.

Key Point: Black raspberries offer a wide range of vitamins and minerals in varying amounts. However, the micronutrient they offer in the highest quantity is vitamin C.

How To Eat Black Raspberries

Black raspberries are similar to other berries in that there are many different ways to consume them.

Here are some common ways to eat the berries:

Here are some answers to common questions regarding black raspberries.

Where do black raspberries grow?

Black raspberries grow in many areas around the world. However, the bulk of commercial production occurs in Oregon in the United States (18).

Where can I buy black raspberries?

It can be difficult to find black raspberries in grocery stores as they only have a short season. Therefore, it is worth searching for information on where they might be for sale locally. If they are not available locally (including frozen black raspberries), there are a few other options. Firstly, here is a guide on how to forage wild black raspberries. Secondly, black raspberry plants can be bought anywhere to grow at home. Lastly, Amazon has several black raspberry products for sale (disclosure: affiliate link).

Black raspberries are tasty berries that are more challenging to find than red raspberries.

However, depending on location, it may be possible to find these berries for sale at certain times of the year or to forage for them.

Like most berries, black raspberries are an excellent source of vitamin C and a broad range of polyphenols.

There is also ongoing research into the potential health benefits of black raspberries, and future research will hopefully provide more answers.