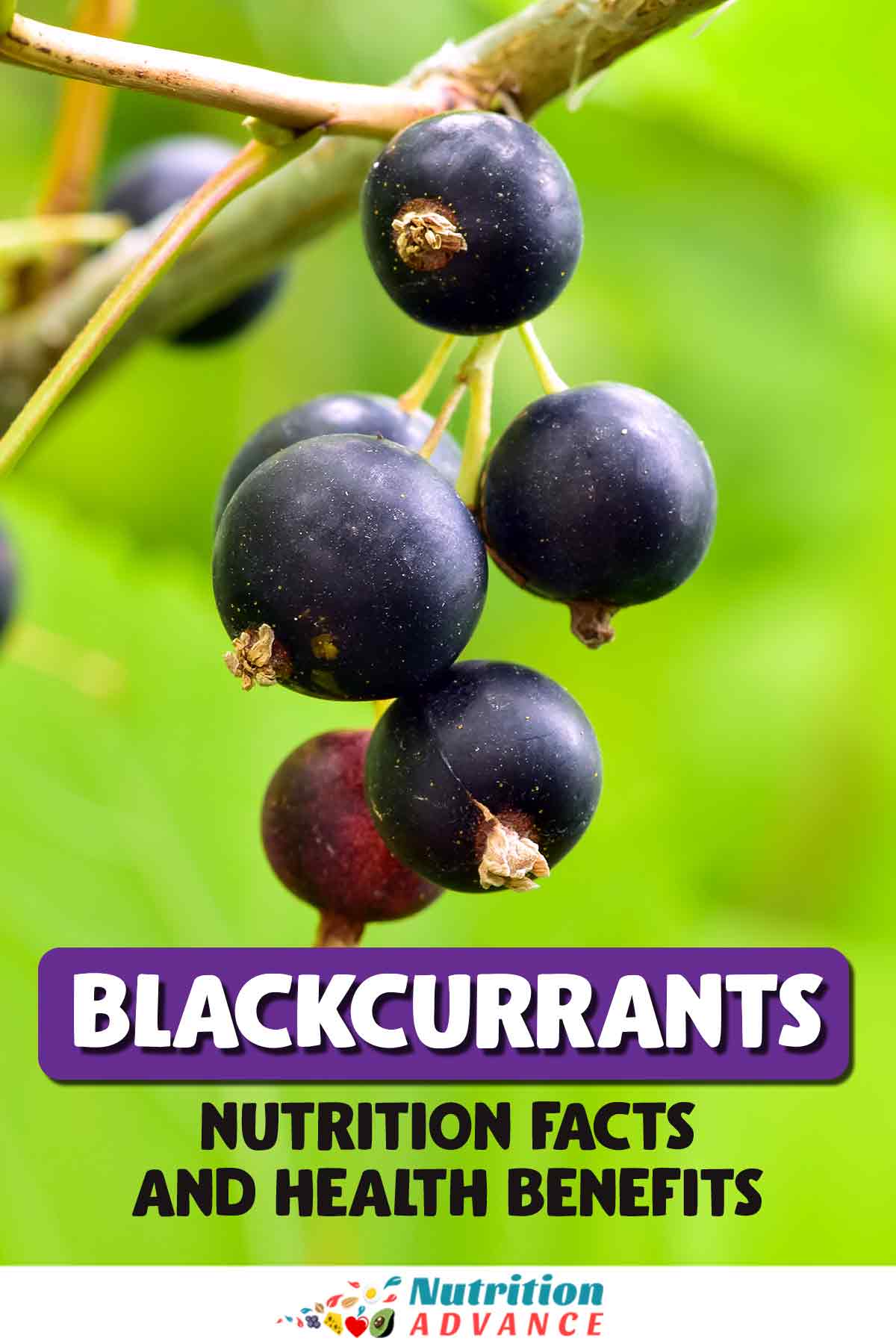 Black currants are little berries that grow on the blackcurrant (Ribes nigrum) plant.

These berries are an exceptional source of vitamin C and polyphenols, and they grow around the world.

This article examines the potential benefits of black currants, their nutritional values, and how we can use them.

But first, let’s take a quick look at precisely what black currants are.

What Are Black Currants?

Black currants are small oval-shaped berries with a dark-blue to black appearance and a tart taste.

The image above shows some black currants growing on a blackcurrant plant.

Black currants are thought to have originated in Russia during the 11th century. The berries are now prevalent globally, particularly in Northern Europe and Asia (1, 2).

Despite this, only limited production occurs within the United States.

This is primarily because the industry was destroyed in the early 1900s due to the enactment of a ban on the commercial production of black currants. This ban came about because blackcurrant shrubs could help spread a fungal infection called white pine blister rust (3, 4).

Unfortunately, this infection was a threat to the lucrative timber industry, and the blackcurrant paid the price. The ban remained in place from 1912 to 1966, thus lasting more than fifty years.

Although black currants are currently legal in the United States, the industry is still recovering.

Black currants have a tart and somewhat astringent taste, which is influenced by both their significant ascorbic acid (vitamin C) and polyphenol (such as tannins) content (5).

It is possible to eat the berries raw, and some people enjoy doing so, but black currants are somewhat of an acquired taste.

Although we think of black currants as one specific berry, there are numerous different cultivars of blackcurrant with slight differences in characteristics (6, 7).

Key Point: Black currants are popular berries that have a somewhat tart taste.

Most fruits contain a good amount of vitamin C, but black currants are exceptionally high in the vitamin.

To show just how much vitamin C black currants contain, here is how their provision of the nutrient compares to other renowned food sources (8, 10, 11, 12, 13):

As we can see, black currants are one of the most vitamin-C rich foods in the human diet.

Vitamin C plays a crucial role in the human immune system, and it helps to protect our cells and grow and repair tissues (14).

Additionally, this essential vitamin may potentially have a protective effect against the development of various diseases. On this note, population studies show that individuals maintaining sufficient vitamin C levels have a lower risk of several chronic diseases (15, 16, 17).

A Good Source of Fiber

Fiber can have a range of potential benefits for the human body, and these include:

According to the guidance daily values developed by the Food and Drug Administration (FDA), the recommended fiber intake is 28 grams per day. Therefore, just 100 grams of black currants provide approximately 25% of fiber’s daily value (8, 9).

Over recent decades, various berries have shown that they may have a beneficial effect on blood pressure levels and other cardiometabolic risk markers.

Interestingly, some human trials have used blackcurrant to see if the berry could improve these markers.

Here is a summary:

The researchers speculated that these effects were likely due to black currants’ dietary fiber and polyphenol content.

The strength of evidence for these effects is relatively low

Further research is necessary as there have been few clinical human trials, each with a relatively small number of participants. One of the trials featured a range of berries rather than solely black currants.

Key Point: There is some limited evidence that blackcurrant consumption may improve markers of cardiovascular health.

Mixed evidence exists on the potential benefits of blackcurrant on exercise performance.

Black currants are a rich source of anthocyanins, a type of flavonoid polyphenol thought to benefit exercise performance and recovery (27).

Here is a summary of findings (alongside the references) for existing randomized controlled trials investigating the potential benefits of black currants in this area:

A systematic review and meta-analysis published in the Journal of the International Society of Sports Nutrition considered all the available evidence. They concluded that “blackcurrant has a small, but significant, effect on sports performance” (34).

Are there any potential downsides of blackcurrant consumption?

On the positive side, it appears that the risk of allergy is remote. The Journal of Allergy and Clinical Immunology notes that although similar fruits can be a common cause of allergies, no allergy to blackcurrant has yet been reported (35).

Perhaps the biggest drawback of black currants is that some people find them too bitter/tart to consume alone.

In this case, people may consume sugar-sweetened blackcurrant products as an alternative. Due to the added sugar, such products may not be as nutritionally beneficial as other fresh berries.

This really depends on personal taste preference; some people enjoy tart berries like blackcurrants and cranberries, while others don’t enjoy them in their unsweetened form.

Key Point: It is possible that allergies may exist, but blackcurrant allergies have not been reported. The main drawback of black currants is that many people find them too tart.

For reference, here are the full nutritional values for black currants per 100-gram (3.5 oz) serving.

All the nutritional data is courtesy of the USDA’s FoodData Central database, and the daily values have been calculated using the FDA’s daily values (8, 9).

Black currants are a significant source of dietary polyphenols.

Research has shown that, alongside blueberries, black currants contain more significant amounts of anthocyanins than other berries (37).

According to research published in the British Journal of Nutrition, black currants have a glycemic index of 22. Per typical 100-gram serving, this equates to an estimated glycemic load of 2 (38).

Key Point: Black currants contain a broad range of essential nutrients, particularly vitamin C. These berries are also a rich source of polyphenols, and they have a glycemic index of 22.

How To Use Black Currants

Aside from all the common commercial products, here are some ways we can use black currants at home:

For some more recipe ideas on savory and sweet cooking with black currants, the BBC Good Food website has some ideas here.

Black currants offer a wealth of vitamin C, and they are one of the most polyphenol-rich foods.

While the breadth of research on blackcurrant is relatively small, evidence suggests they may have slight beneficial effects on blood pressure and sporting performance.

Their flavor can be a little bit tart, but they offer many nutritional benefits for those that enjoy the taste.