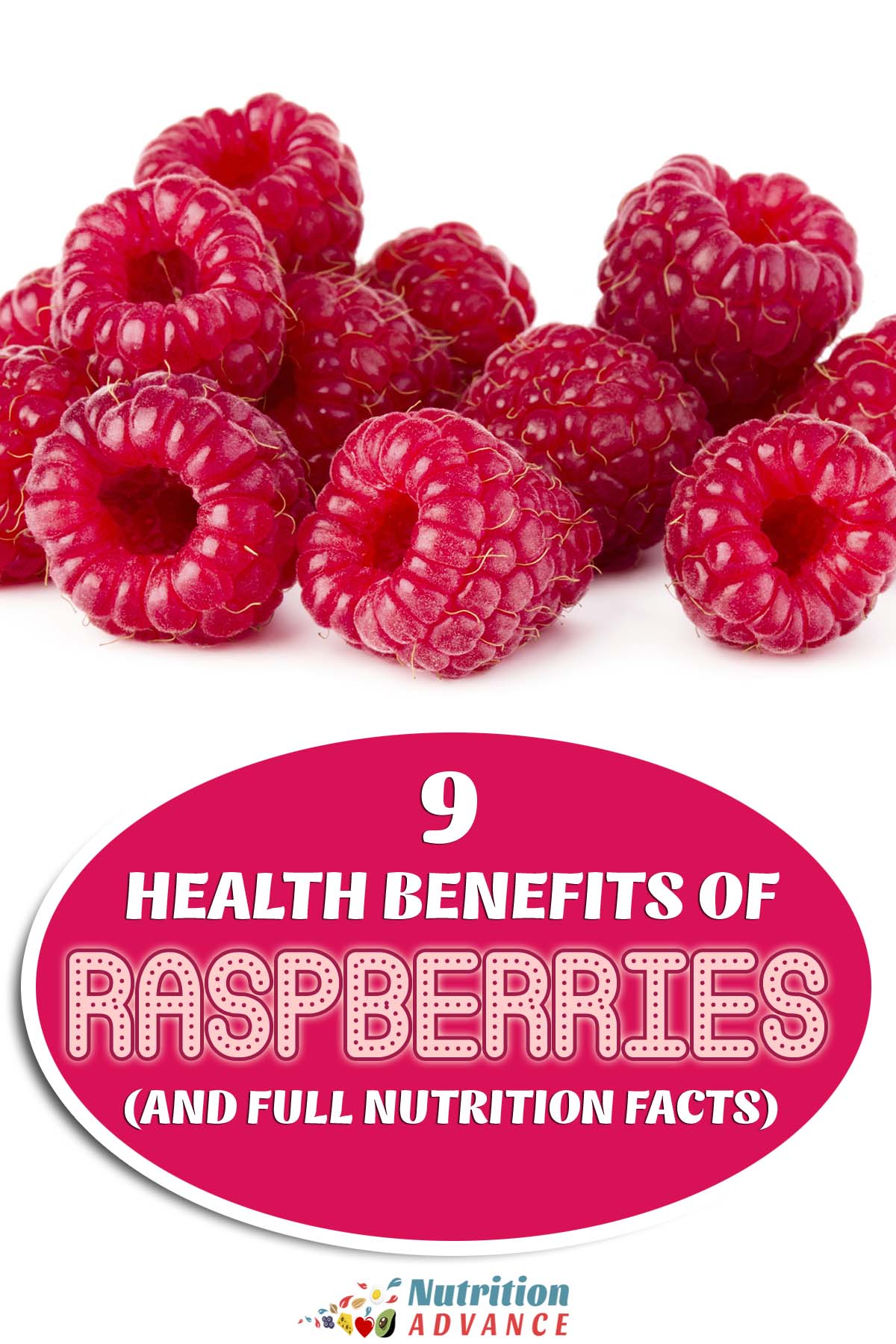 Red raspberries are one of the healthiest choices of fruit, and they taste delicious too.

These berries are low in sugar, high in fiber, and packed with a variety of interesting compounds.

This article takes a look at the potential health benefits of red raspberries and their full nutrition profile.

Raspberries come in a surprising number of colors and varieties, including red, purple, black, golden, and white.

Interestingly, black raspberries are an altogether different species of raspberry.

However, this article refers to red raspberries, which are the most popular variety of raspberries in the world today.

The nutrition tables below show the full nutritional values of raspberries per 100-gram serving (1).

Raspberries are predominantly a source of carbohydrate, and they contain 11.9 grams per 100-gram serving, most of which is dietary fiber.

Key Point: Red raspberries provide a decent amount of fiber, vitamins and minerals. These berries are particularly high in vitamin C and manganese.

There are several potential benefits that raspberry consumption can have on our health.

Here is a summary.

In this study, participants consuming 200 grams of red raspberries showed “significant improvements in flow-mediated dilation (FMD)” two hours (and up to 24 hours) after consuming the raspberries.

Researchers believe that the polyphenols within red raspberries, such as anthocyanins, are responsible for this effect.

Red raspberries are one of the best dietary sources of vitamin C, and they offer 44% of the daily RDI per 100 grams (1).

Vitamin C is an essential vitamin that functions as an antioxidant in the body.

Among the numerous functions of the vitamin, it is responsible for the growth, repair, and maintenance of all cells, and it helps to protect against oxidative stress (4).

Key Point: Raspberries are an excellent source of vitamin C.

3) High In Fiber, Low In Sugar

Red raspberries contain 11.9 grams of carbohydrate per 100 grams, and the majority of these carbs (6.5 grams) are from fiber.

In other words; raspberries only contain slightly over 5 grams of “net” (digestible) carbohydrate.

Carbohydrate quality is important, and higher ratios of fiber to sugar/simple carbs is associated with (5, 6, 7);

Since raspberries are low in overall carbohydrate, high in fiber, and low in sugar, they are one of the best choices of fruit for people undertaking a low carb diet.

On this note, many people with type 2 diabetes choose to use a diet low in digestible carbohydrate to manage blood sugar levels.

Low carb intervention programs for type 2 diabetes often include low glycemic fruits such as raspberries in the diet (8, 9).

There is also some (low-quality) evidence that raspberries may help to lower blood sugar levels.

However, most of the studies showing a reduction in blood glucose response used high strength raspberry extracts added to a high-carb meal.

Key Point: Raspberries are higher in fiber and lower in sugar than most fruits. As a result, they are one of the better fruit choices for those on carbohydrate-restricted diets.

Similar to other varieties of berries, raspberries contain a high concentration of anthocyanins, which are a type of polyphenolic compound (polyphenol).

There is a lot of debate on the function of polyphenols, what they can do in the body, and their bioavailability.

Although the bioavailability of anthocyanins is relatively low, a recent human trial demonstrated that about 15% of consumed anthocyanins appear in the blood (11).

There are also numerous studies that suggest potential benefits from anthocyanins.

Firstly, animal studies using mice models show that supplementing the diet with large doses of anthocyanins can protect against oxidative stress and lower markers of inflammation (12, 13).

Regarding human studies, a systematic review of 19 randomized clinical trials showed that (14);

However, other than this, there was no impact on fasting blood sugars, weight, blood pressure, or other health markers.

On this topic, it is also worth noting that black raspberries are king when it comes to polyphenol and anthocyanin content; they contain multiple of the amount found in red raspberries.

The most concentrated mineral in raspberries is manganese, and the berries contain 34% of the mineral’s RDI per 100 grams (1).

Manganese has a wealth of functions in the human body, and it is essential for optimal bone health, wound healing, and metabolism (15).

The mineral is quite prevalent in food, but raspberries do still provide a significant amount of it.

6) May Have Slight Anti-Inflammatory Properties

There is a wealth of animal studies showing that raspberries can have anti-inflammatory effects (16, 17).

However, what happens in a high-dose rodent study does not automatically mean something would have the same effect inside the human body.

There is not a significant amount of evidence for anti-inflammatory effects in humans from raspberries, and more research is necessary for this area.

Key Point: Animal studies show that large doses of raspberry extracts can lower inflammation. However, there is little evidence from human trials at this time.

In a recent randomized controlled trial on healthy human volunteers, four weeks of red raspberry intake appeared to have a positive impact on the gut microbiota (18).

Research on the microbiota is in the early stages, but researchers have found a link between the Firmicutes/Bacteroidetes ratio and health.

Notably, a higher ratio of Firmicutes to Bacteroidetes is associated with obesity and several diseases (19, 20, 21).

Key Point: Red raspberry intake may have a positive effect on the gut microbiome.

When considering raspberries (or any other berries), many people wonder whether buying fresh or frozen makes a difference.

The good news: there is no major difference.

In one study, researchers recorded the level of vitamins and phenolic compounds in fresh raspberries and then froze the berries. After analyzing the frozen berries, the researchers found no nutritional differences.

In other words; freezing the raspberries had no impact on the level of vitamins and phytonutrients they contained (22).

Whether you buy fresh or frozen, therefore, isn’t really important in respect to the nutrition profile. Fresh and frozen are both good choices, and it is just a matter of price, convenience, and personal preference.

Key Point: Freezing raspberries has no effect on their nutrition profile.

Although raspberries taste delicious on their own, here are some simple but tasty ways to eat them.

Raspberries and cream is a classic option. For taste, it may also be the best.

This combination is an excellent option for anyone watching their blood sugar too; the fat content of the cream will blunt the (minimal) blood sugar spike from the raspberries.

Fresh berries and cream is also a perfect healthy dessert for children.

For a healthy and straightforward raspberry yogurt, all you need is two ingredients;

Blend them together for a raspberry flavor yogurt that is much healthier than anything you’ll find in stores.

To make a batch of dark chocolate-coated raspberries, use the following recipe;

Just melt the dark chocolate on the stove, add the cream and raspberries, and ensure the raspberries are fully coated in the chocolate mix.

Next, put the coated raspberries in the refrigerator, wait until the chocolate coating hardens, and then serve.

Key Point: Raspberries taste great just by themselves, but it’s easy to make delicious (and relatively healthy) snacks with them too.

Red raspberries are a low-sugar, high-fiber fruit with several proven (and some potential) benefits.

As a bonus, raspberries also taste delicious, and they make a great option for a healthier dessert.

For more on fruit, see this guide to the highest fiber fruits.

For more articles about berries, see this review of cranberry fruit.