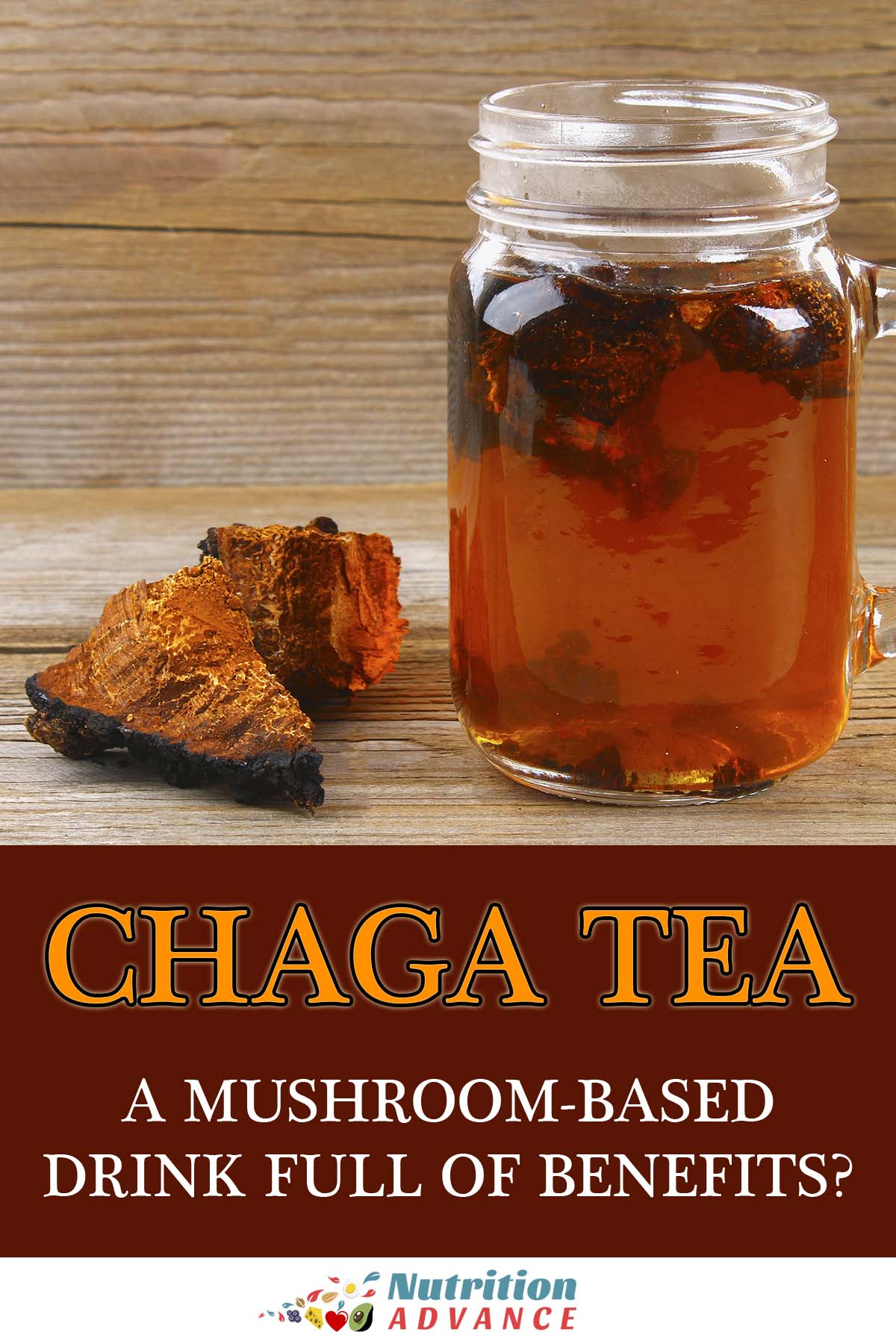 Chaga tea is a drink made from an extract of a medicinal mushroom called Chaga.

The mushroom has a long history of medicinal use in China and Northern Europe, and proponents claim that it offers numerous health benefits.

Some of these claims are rather bold too, and they include cancer-protective and immune-strengthening properties.

However, is there any truth to these claims?

This article examines what the research says about Chaga mushroom tea, and the potential health benefits and side effects of the drink.

What Is Chaga Mushroom Tea? 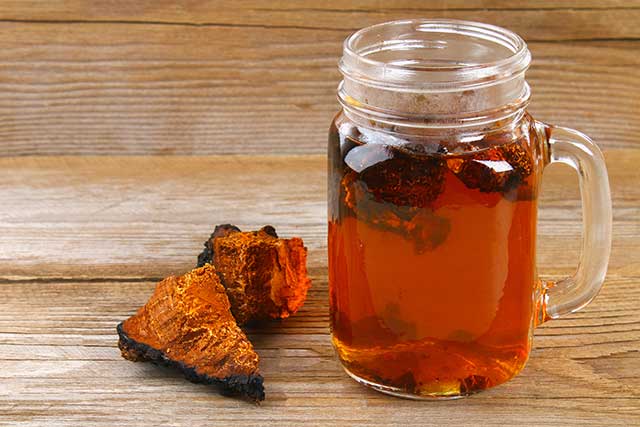 Chaga is a popular kind of herbal tea thought to have originated in ancient Siberia (1).

Known scientifically as Inonotus obliquus, Chaga mushroom is a fungus that grows on the bark of various trees, particularly birch trees, in the northern hemisphere (2).

The mushroom prefers cold climates, and we can find it in Canada and northern parts of the United States, China, Korea, and Europe.

Interestingly, the tea contains a wide range of chemical compounds that some researchers feel may benefit our health.

Over the past several centuries, locals have used Chaga tea as a supposed folk remedy for all kinds of conditions, ranging from diabetes to cancer.

It is also possible to buy Chaga mushroom and instant coffee mixes, and these drinks have become increasingly popular over recent years.

Chaga tea tastes nothing like regular cooking mushrooms do, and anyone who is expecting it to do so will be disappointed.

This tea is relatively mild in flavor, and it has earthy notes with a slightly bitter taste.

There is also a slight hint of vanilla, which comes from the vanillin compound (also found in vanilla beans) that Chaga mushrooms contain.

However, this is in a black coffee style kind of bitter rather than being overly so.

The tea is refreshing and enjoyable to drink.

How To Make It

The way to make Chaga mushroom tea depends on the variety you buy;

Chaga mushrooms contain a variety of active compounds responsible for their effects.

Key Point: Chaga mushrooms have been used to brew tea for hundreds of years.

Firstly, it is important to note that there are no human trials on Chaga.

While in vitro (test tube) and animal studies can indicate potential benefits, human studies are needed to confirm effectiveness.

Marketers of the product are unlikely to mention this fact, so be aware of exaggerated health claims about Chaga tea.

That said, the points below summarize the potential benefits based on existing research.

Research shows that Chaga mushroom may have blood glucose-lowering properties.

However, human trials are necessary to confirm these effects.

Since there are currently no human trials to verify this, anti-cancer claims require a heavy dose of context.

However, test tube and animal studies show that there is a potential mechanism for the mushroom having cancer-protective properties.

Firstly, betulinic acid is one of the chemical compounds that Chaga mushrooms contain. Studies on this compound show that it has “potential as an anti-cancer agent” (5).

A further study demonstrated that compounds in Chaga mushroom have a cytotoxic effect on cancer cells (7).

Key Point: Chaga mushroom has anticancer properties, but there are no human studies in this area, so take this with a pinch of salt.

Once again, the potential effects of Chaga tea on cognition come from animal studies on the mushroom.

In one study, an extract of Chaga was given to mice with amnesia for seven days.

Based on cognitive tests using a maze and passive avoidance tests, Chaga “significantly improved the learning and memory” of the amnesic mice (8).

The researchers stated that their findings signify the beneficial impacts that Chaga could have on higher brain functions.

However, equivalent research in humans is necessary to confirm these potential benefits. 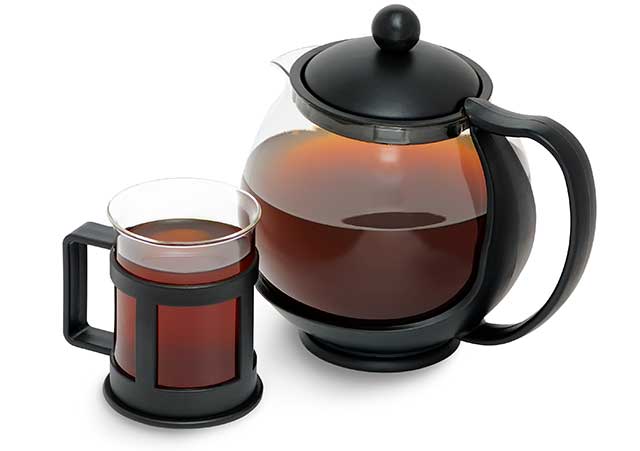 Both cell culture and animal studies show that compounds within the mushroom have immunostimulating activity (9, 10).

A strong immune response is important for the body to fight infection, viruses, and bacteria.

Therefore, this could be a potential benefit if research in humans shows the same immune upregulation activity.

There are also studies that looked into the potential anti-inflammatory effects of the mushroom on human lymphocytes taken from healthy patients and also patients with inflammatory bowel disease (IBD).

These lymphocytes were then induced with oxidative stress via an injection of hydrogen peroxide. After this, they were “supplemented” with an extract of Chaga mushroom.

Interestingly, the results showed that Chaga supplementation reduced DNA damage by 54.9% in the cells from IBD patients and by 34.9% in the healthy patient control group (13).

However, once again, this study took place outside of the human body and we cannot assume the same effect would happen in human trials.

Neither Chaga mushrooms nor the tea they make contains any caffeine.

As a result, the tea is suitable for anyone with caffeine sensitivities or allergies.

For those looking for caffeine-free options, teas like hibiscus or blue tea may also be of interest.

su_note note_color=”#F4cfcf” text_color=”#000000″]Key Point: Chaga mushroom tea is a great alternative for anyone trying to cut down on caffeinated drinks like coffee and tea. [/su_note]

On the negative side, there are also some potential concerns about Chaga tea, and it may have certain side effects.

1) May Interact With Diabetes Medication

There is little in the way of human research on Chaga’s effect on blood sugar.

However, studies do show that it may have blood sugar-lowering properties (3).

If diabetes patients are already taking blood glucose-lowering medication, anything that may further lower blood sugar could cause blood sugar levels to become dangerously low.

Therefore, it is probably a wise precaution for people with diabetes to discuss using Chaga tea (or supplements) with a doctor.

However, for people with sensitivity to oxalates, a high dietary intake of oxalic acid can increase the risk of kidney stones (15).

It may be better for anyone following a low-oxalate diet to avoid Chaga tea and related supplements.

Unfortunately, there is one case study of an elderly female liver cancer patient who suffered oxalate nephropathy after consuming approximately 4-5 teaspoons of Chaga mushroom powder per day (16).

3) There Is No Long-Term Research (Good or Bad)

As mentioned throughout this article, there is very little research on chaga mushroom tea using human participants.

Therefore, we don’t know what potential positive (or negative) effects the mushroom extract could have on health markers over the long term.

Key Point: Chaga tea and extracts may not be suitable for people following a low-oxalate diet or for people on blood glucose-lowering medication.

There are a lot of exaggerated health claims about Chaga tea.

Although this mushroom extract may have health benefits, there is no evidence from human trials at this time.

However, the tea is likely a healthy choice for most people, and it tastes reasonably pleasant.

Therefore, it might be better to think of the tea as a tasty drink and take any health benefits as a bonus.

For more information on different types of tea, see this guide to the popular Japanese matcha green tea or this review of rose tea.